“The Flood” has arrived and it’s coming from Major Moment and their brand new single. The song is significant for a couple of reasons; one, it’s keyboardist and singer Sasha Razumova’s first-ever featuring her on lead vocals, and two, it’s a strong commentary on important contemporary issues. The song focuses on the human contribution to global warming, and the rising tensions brought upon by hatred and inequality. It’s indicative of the passionate approach to songwriting taken by Major Moment which is defined by intense and diverse cinematic rock that incorporates heavy guitars, diverse synths, and melodic vocals.

It’s been an eventful two years for the band since the release of their 2018 debut EP, One Small Step. The release of The Sequel followed last year and their rising popularity helped the group land tours and gigs with Outline In Color, Makari, and Calling All Captains.

We recently caught up with both Razumova and fellow vocalist Andrey Borzykin, and we decided to take a break from all the music talk for our latest Art of The Meal interview. We spoke at length with the two of them about all things food and cuisine related, including cooking, go-to meals, picking eating, and the best fast-food chains.

Sasha Razumova: “Yes! Eat whatever you want but know the limit diet. As long as I’m staying active, and can control the amount of ‘not so healthy’ food to be reasonable, I think I’m good.”

Andrey Borzykin: “Ugh, no diet right now. That’s not to say there shouldn’t be one, (laughs).”

Borzykin: “It expands our choices, we love trying new stuff. And what exactly do you mean by ‘not working?’ Not sure we have such time (laughs).”

Razumova: “Not that often anymore… but I actually do enjoy cooking meals! Unfortunately, something had to give, and now most of our time goes towards developing our music career.”

Razumova: “Oh, we are foodies big time! We traveled and dined around the world anywhere from beat-down diners and food trucks to 3 star Michelin restaurants. Food preparation is such a creative process, it’s art, and we love it! By the way, it intersects with music in so many ways, we all use the same notes and instruments just like chefs might have the same tools and ingredients, but the way you put them together will most probably be unique to your creative vision. Finding interesting flavor combinations is just as exciting as writing new music.

Besides that, I am a pastry chef! I’m specialized in making beautiful mirror-glazed mousse cakes that are never too sweet and always well-balanced flavor-wise and nutrition-wise. Take a look at some, and follow my Instagram account. I also make the most authentic Italian tiramisu outside of Italy, which is a hit at any party, and tasty panna-cottas.”

Borzykin: “Everything Sasha said about her cooking skills is true and accurate. I’m amazed by her talents!”

Razumova: “Our top three would probably be Park 9, Gaslight, and La Campania.”

Borzykin & Razumova: “That would undoubtedly be LA or New York City. So many choices…”

Borzykin: “(laughs) We’ll start including food items on the rider as soon as our technical rider is fulfilled properly. I don’t think we would be very picky. Bottled water is a must. Tea and honey would be awesome. If we have a crew by then, my concern would be just to take care of them, so they’re well fed.”

Borzykin: “A corndog? (laughs) Just kidding! Since it’s a gift, especially from our fans, we’d let them be creative and would gladly accept anything they come up with, after all it comes from the heart. There was this Russian rip off of Wheel of Fortune called Pole Chudes (Поле Чудес) which translates as The Field Of Wonders, and somehow it became a tradition, and then almost the main feature of the whole show to bring all sorts of ridiculous gifts to the show’s host, mostly home-made, including all sorts of breads, alcohol and marinated products. Not sure why, but your question really made me think of it (laughs).”

Borzykin: “Not yet, although the first lines of ‘Mistakes’ were written immediately after visiting a restaurant, on the way home, while having an argument with Sasha. Spoiler alert: we’ve made peace pretty quickly, and now have a song too, it’s a win-win, (laughs).”

Borzykin & Razumova: “It’s been a while… We were actually considering buying ourselves a grill, that would be cool! Maybe next year?”

Razumova: “Barbecue is all about meat! Whether it’s pork, beef, or chicken, doesn’t matter.”

Borzykin: “Totally agree! As long as it’s done right. No medium well or well done steaks, please. As far as sides, although not a necessity, I love potatoes, and a salad… Speaking of potatoes and salads, I’m about to go on a mini-rant here. Americans got it all wrong! You can only call a salad something that has greens in it. So no, potato salad, tuna salad, chicken salad, egg salad, pasta salad are definitely not proper salads, people! Please Google ‘salad.’ Greek salad is a proper salad (again, traditional Greek salad, Horiatiki/Xoriatiki, not its American joke of a substitute with lettuce and shaved tasteless tomatoes).”

Borzykin: “When I was a child, definitely. But thankfully, my parents are pretty good cooks, and my mom was very strict. It was unheard of not to finish whatever was served on the plate. We never dined out, and takeout wasn’t a thing in Russia when I was growing up, so for better or worse 99.9 percent of meals were homecooked.”

Razumova: “I was definitely much pickier as a child, (laughs)! And I still cannot eat certain foods, like anchovies, canned herring, canned tuna, lamb, mustard, horseradish, collard greens, liquorice… I think those are the worst, (laughs). But some of the foods I changed my mind about were olives, couldn’t eat them until I was like 17, I’ve heard that it’s a common thing. Blue cheese, couldn’t even stand close to it until I visited Italy for the first time. The amount of different cheeses I’ve tried and the quality of each kind was just overwhelming! Herring, I honestly tried it so many times before and each time I saw it, I wanted to run away… until we went to the Russian restaurant in New York City, called Mari Vanna (we highly recommend!), it’s been so long since my last attempt and everyone was asking me to try… and I was shocked to find it was actually really good! But it doesn’t mean I’ll be ordering it myself any time soon.” 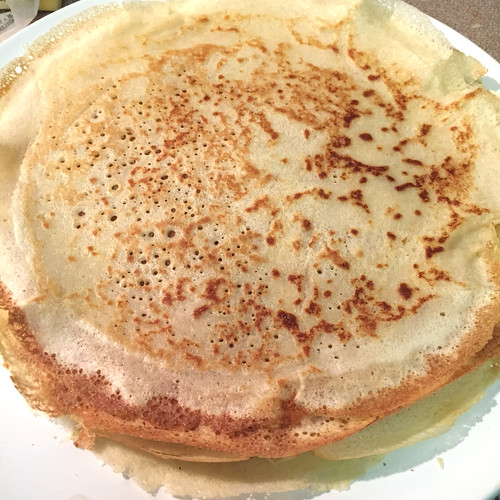 Borzykin: “Some traditional Russian dishes can be considered strange. The ones I’d recommend trying are ‘kholodets’ which is essentially a meat jelly. I know it sounds gross, but it’s usually very tasty! ‘Salo’ is basically cured slabs of fatback (pig’s fat). Same as our first item, so delicious if done right!”

Razumova: “Apparently, a lot of our American friends have never tried caviar (fish eggs), which came as a shock to me! If you have never tried caviar, you definitely should, it’s so delicious! Don’t be cheap though, the more expensive it is, the better the experience. And both, red and black, because they’re so different. Otherwise, I don’t even know what to consider ‘strangest…‘ Maybe French food? Like frog legs or escargots? I love them. Oh, I know what was the strangest! It was our wedding rings! I made them out of chocolate and we ate them right after the exchange at the ceremony. Don’t believe me? Well, here they are!”

Borzykin: “Speaking of black caviar. It has actually made it into our newest music video – ‘The Flood’ (no, not ‘The Food’). Myself and Sasha created this crazy visual concept, inspired by the works of Billie Eilish and David Lynch, based around black and white imagery. In the video, everything gets consumed by this mysterious black liquid, while the characters are casually doing some mundane things, like dancing, playing chess, playing a violin and feasting, instead of trying to save themselves, half submerged in the black water. We tried to find a cheaper substitute for the black caviar, but nothing looked convincing enough, so we decided to go for the real thing. How many rock music videos can you recall that have real black caviar in them?”

Razumova: “Would agree on pineapple or pear, but it depends on the mix of all ingredients. The ideal pizza might be a simple Margherita when done right! Other ingredients really depend on the mood, but probably prosciutto will be on the top of my list.”

Razumova: “Since childhood I tried to help my mom with cooking. I loved making salads, then went on desserts. I was really good at making breakfasts. Have you ever tried ‘blinchiki’ (Russian crepes)? Oh, they’re really good! Years later, when I started to live on my own, I learned how to cook different types of meat, soups and garnishes. I just can’t cook strictly by recipe! It’s more like an outline of a dish that I will modify to my taste and make it my own.”

Borzykin: “Breakfasts made by Sasha are to die for!”

Borzykin & Razumova: “Definitely chef Gordon Ramsey. Not only the man has an impeccable sense of beauty, and obviously cooks extremely well, his shows are very entertaining. We appreciate his brutally honest sense of humour and creative food-themed insults (idiot sandwich and doughnut are classics).”

Razumova: “Nothing fancy, just a regular kitchen. I have a special section for desserts though, with a granite board for tempering chocolate and some special tools and gadgets. Precision is important here, (laughs).”

Borzykin: “It’s all about the chef, not the gadgets, (laughs).”

Borzykin & Razumova: “Chipotle or Sweetgreen. We love good burgers, but none of the chains got it right. There are a couple of locations of this burger place called Wild Willy’s around New England, that’s a proper burger place right there!”

Razumova: “I like grocery shopping! I usually go to my favorite local store, Russo’s, which has an incredible meat and cheese section, a lot of fresh fruits and vegetables from local farmers, and even international foods.”