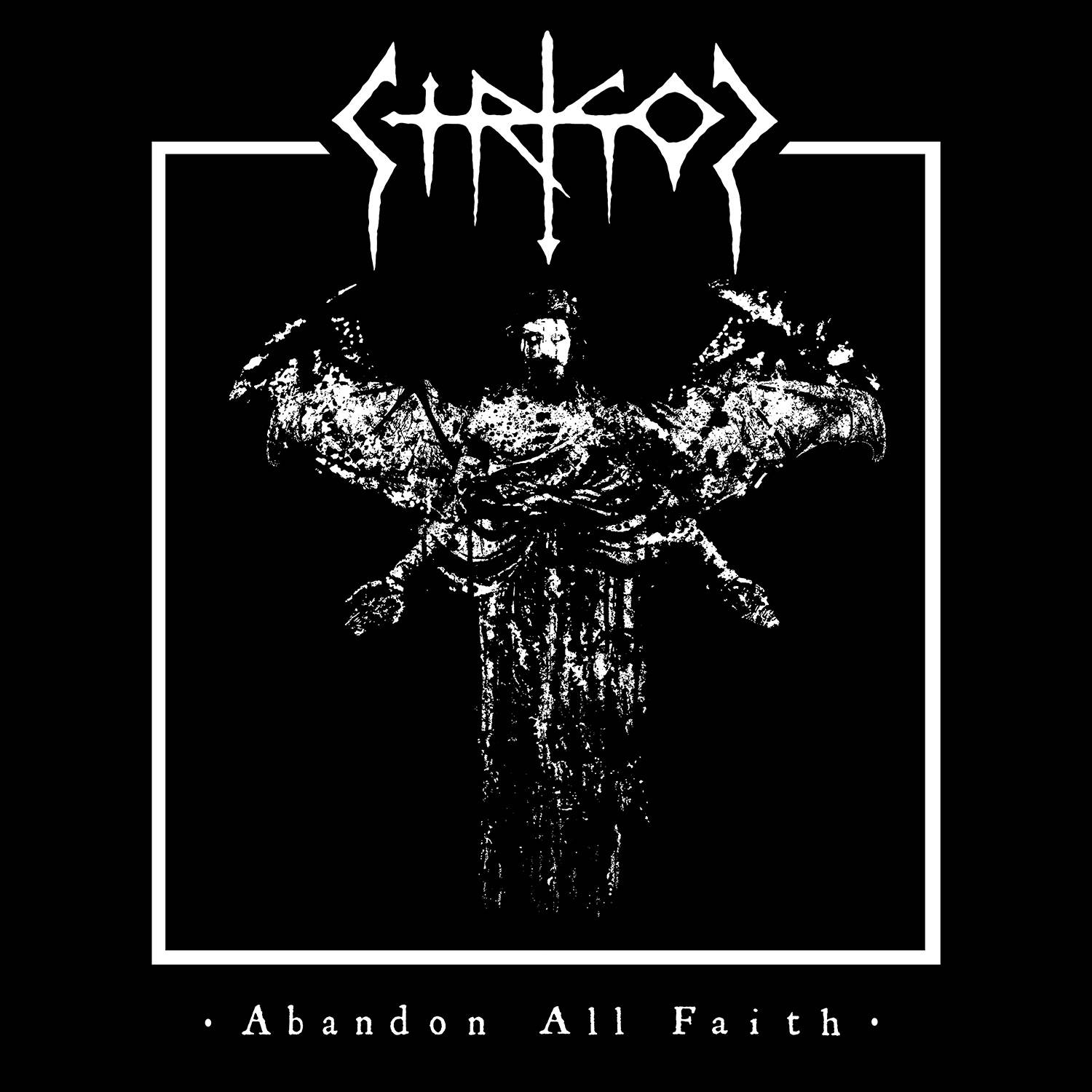 Never let it be said that metal is not an angry genre. Myriad bands may be toying with beautiful melodies these days, but there are just as many dealing in unbridled fury in one form or another. One such group is Strigoi, the new project from Paradise Lost’s chief axe-swinger Greg Mackintosh. Working in conjunction with his friend and Vallenfyre bassist Chris Casket, the duo have delivered one of 2019’s angriest albums in the shape of Abandon All Faith.

Despite the record’s title being the same words emblazoned over the gates of Hell in Dante Alighieri’s famous epic poem The Divine Comedy, Strigoi’s debut release isn’t a strictly theological output. Chris, who handled bass and lyrics, has stated that he would rather people make up their own minds about the meaning behind the lyrics. That said, between the grainy black-and-white artwork, the album’s title, and the opening lyrics being “There is no Heaven, there is only Hell,” the band sets out their stall in unequivocal terms: this is not going to be the kind of album you play to your kids for a super-happy-fun-time.

With Mackintosh on vocals and guitars, Casket on bass, and Paradise Lost drummer Walterri Väyrynen providing studio drums, you could be forgiven for thinking that Strigoi is just a Vallenfyre offshoot. It’s not. Where Vallenfyre emphasised the crust, with murky guitars delivering buzzsaw riffs soaked in distortion, Strigoi offers a (slightly) cleaner sound. With thunderous drums from Väyrynen, it fits more into the blackened-death camp than the crust-laden death metal of Vallenfyre. But ultimately this is just nit-picking that will only satisfy genre purists. What matters is the music and the lyrics.

This terrifying song will have you seeing “Phantoms”:

Both pack a hefty punch. As mentioned, this is not music for a pleasant family jolly to the beach. Mackintosh’s riffs pummel the ears, interspersed with the occasional moments of shred on tracks like “Seven Crowns.” Casket’s ominous, sludgy bass feels like a member of the undead crawling unavoidably towards you, and Väyrynen’s furious drums come at the listener with no punches pulled. It’s the perfect consolation to fans upset at Vallenfyre’s demise, but fans of bands like Bloodbath will also feel right at home here. But it’s Mackintosh’s vocals that really sell the album. His is an almost demonically guttural howl, dredged up from the blackest infernal depths – incredibly fitting for an album named for the words above the Gates of Hell.

The actual words in Dante’s epic work read “Abandon all hope, ye who enter here.” What better message to read on your way into Hell? However, Mackintosh and Casket have twisted them into “Abandon All Faith.” So, it’s fair to say that the album exhibits anti-religious sentiment. That much is obvious from lyrics like “In the name of the Lord/Defacement be done/Forever deplore/Scorn of the Father/Lie in the filth you have spread” from “Scorn of the Father.” Alternatively, take the lyrics of “Parasite,” which blasts priests as sycophants whose “gritted teeth bared to the root” offer only “sickly devotional truth” and the sermons preached as “self-seeking fellation” and “moral molestation.” That is, religion is a cancerous parasite that twists the morals of our world into a pursuit of power and self-gratification for those who preach its tenets. Looking at the world around us, and how it has been devastated by those who have corrupted the messages of world religions, this isn’t a wholly unreasonable standpoint. We live in a dark world, one made darker by the sins of those hypocrites who preach religious tenets in public and practice their opposite in private.

If you’re really down with this tune, then maybe it should be “Carved Into The Skin”?

But lest we get bogged down in anti-religious discourse, the track “Iniquitous Rage” (described in our interview with them as the jauntiest, happiest song on the album) takes its inspiration from a Romanian serial killer known as the Strigoi of Budapest. This seems to have been a title passed from father to son, with both of them being serial killers. Thus we get lines like “Clandestine horror ingrained in the blood.” Keeping it in the family has taken on a whole new meaning. Elsewhere, “Seven Crowns” inveighs against the ineffectual politicians who do nothing to improve the lot of the people that elected them: “Archetype swine/Feeding the lies… Hypocrisy and greed/Lay rotten in the streets.” There is little that is particularly direct about the album’s lyrics, however. On the one hand, this is could be argued as obfuscation on the part of Casket, who wrote most of the lyrics: it can be helpful to listeners to be clear in your meanings. Dawn Ray’d’s latest album Behold Sedition Plainsong is a perfect example of that. On the other, it allows listeners to interpret the lyrics as they please, which gives it a more universal appeal.

A lack of originality is often bemoaned in new bands, and that’s arguably true here. Mackintosh and Casket aren’t bringing much to the table that isn’t already on offer for death metal fans. But this would do a disservice to an album that, for all its offerings are dark and infernal, is ultimately an enjoyable listen. It’s like being in a bakery: there will always be something new and bold and interesting to try, but there will also always be something reliable and comfortable to consume. Strigoi fall firmly into the latter category: it may well be similar to a lot of what’s come before, but that’s not really a bad thing.

Ultimately, if you like your death metal to sound as if it has crawled its way out of a hellish abyss, you’ll enjoy Strigoi and their debut album. It’s not for the faint of heart, nor for those looking for an achingly beautiful arrangement of delicate melodies. It’s filthy and dark in both sound and aesthetic: a death metal album that honestly reflects the world we live in today.

The “Nocturnal Vermin” slithering around this song are horrifically good.