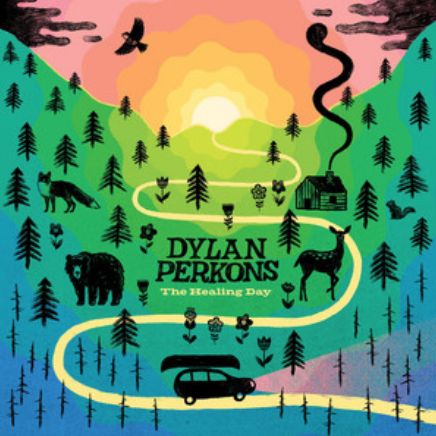 Dylan Perkons came to us with an ear-catching raggedly soulful voice, reminiscent of the folk singers of the 60’s and 70’s. His debut album, The Healing Day, is a collection of richly orchestral songs that tell the story of an experienced songwriter finally stepping out to record under his own name. Perkons has spent his career working on various projects, honing his craft both on the road and in the studio, so while The Healing Day is his first solo release, it represents a much longer journey.
Drawing influence from Canadian folk songwriters, Perkons uses it as the foundation for his atmospheric indie-pop. A layered album, The Healing Day is full of earnest songs, pop influences, folk traditions, and a certain honesty and intimacy through the lyrics. The opening instrumental track feels like a sunrise, allowing listeners to settle into the feeling of this album right from the start. Perkons first breaks the soundscape with his deep baritone voice that is only the beginning of the album’s storytelling of imperfect, but meaningful, love. The songs move through relatable despair, and moments of reprieve, all with a sentimental understanding of love in its different forms. Overall, The Healing Day is an album that you’ll want to revisit time and time again for its relatability and soothing soundscape.
Connect with Dylan Perkons:
Spotify . Instagram
Spotify . Instagram
0