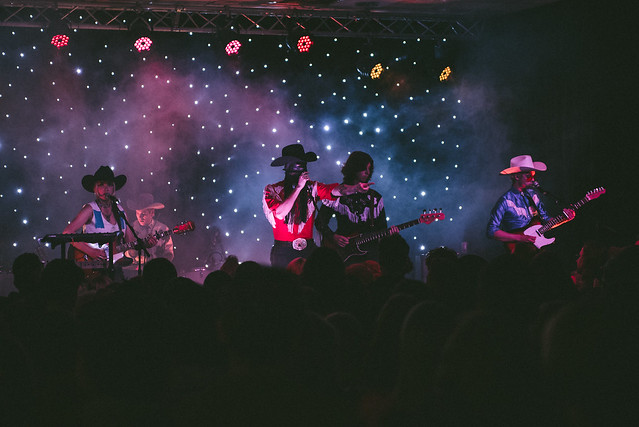 This is Orville Peck’s first tour of Europe and, as such, there are sold-out signs appearing outside venues across the UK including Leeds where a quick shift in venue takes a room full of fans to the Irish Centre from the original location at the Brudenell. A few hundred fans cram into the Irish Centre, with plenty more left disappointed, as Peck takes to the stage with minimal fuss.

What makes the sight of packed out rooms all that more impressive is when you consider that the mysterious Peck only released his debut album, Pony, in April. Taking influence from the usual country greats, Johnny Cash etc., Peck looks and sounds the real deal as he treats fans to eleven of the twelve tracks from the aforementioned Pony album along with a couple of covers thrown in for good measure.

With his face covered throughout the set, Peck is surrounded by an air of mystery while his music treads a familiar path to those greats who inspire his work. However, far from merely copying what has gone on before him, these sold-out dates show that Peck is a man his audience can relate to and, given that he’s already proved a hot ticket this early into his career, tonight showed that there is no doubt that he will surely become one of those country music greats.

You can see what all the fuss is about by checking out Orville Peck’s video for “Dead of Night”: