One of the most successful young women in the hard rock and heavy metal industry is none other than Lindsay Schoolcraft. You may be familiar with Schoolcraft from her work playing keyboards in English extreme metal juggernauts Cradle of Filth since 2013. Despite her current place in heavy metal royalty, you may be surprised to know that Schoolcraft actually comes from modest roots. As a child, Schoolcraft was raised in Oshawa, Ontario, a city about 45 minutes away from Toronto. Through talent and good fortune, she was connected with Cradle of Filth and was hired on to play keyboards live before becoming a more permanent member.

Aside from her time in the ‘Filth, Schoolcraft has also committed herself to her own creative outlets, writing her own music all the while being on tour and fully committed to the band. Which has finally led to the release of her debut solo album Martyr, which was just self-released on October 11th (read our review here). You can purchase the album now through Schoolcraft’s own online record shop. In having an entire palette for herself to work with, Schoolcraft has joined her many influences across the rock and metal spectrum to create an original-sounding work with the assistance of Rocky Gray, the former drummer of hard rock band Evanescence. Martyr includes many different sounds through its eleven tracks, with some heavier material, but also some more dreamy introspective sounds.

Since we are huge fans of not only Cradle of Filth, but Schoolcraft as well, we recently spoke with her about her solo debut Martyr, how she became a member of a mega-successful English metal band, and why she decided to work with Rocky Gray on the album.

Released last month, watch the music video for the “Savior” off of Martyr:

We’re a Toronto-based publication so it’s always interesting to speak to successful artists from the area. Your hometown is nearby Oshawa. Did you spend your whole youth in Oshawa or did you live in other places as well?

Lindsay Schoolcraft: “I was born in Ajax and surprisingly on the same street as Dave Brown Sound of Sum 41 and Matt Bran who played drums for Avril Lavigne, so there must have been something in the water there! I later moved to North Whitby where I spent most of my life and grew up. But I’ve always said I’m from Oshawa because that’s where my bands would usually form and all the musicians I knew came from so it was no surprise that I eventually ended up moving here.”

Do you still maintain close ties with Oshawa and the surrounding area? Where do you spend the majority of your time when you’re not on the road?

Schoolcraft: “Absolutely. I like to see my friends out here and be part of the local music and metal scene as much as I can. I honestly just stay at home and hang out with my cats. Right now I’m putting out orders from my store. I’m hoping to spend more time here to write music this winter.”

Now you’ve been a member of Cradle of Filth for several years now, but you didn’t join the fold until well over 20 years into the band’s existence. How does a young, talented woman like yourself wind up in a massive, well-established English metal band that now has a near 30-year history?

Schoolcraft: “Well thank you! I honestly got very lucky and was connected to the band through a friend. Turns out I was just what they needed and at just the right time. I was told it was just for six months and then after the band needed a break, but here I am almost seven years later.” 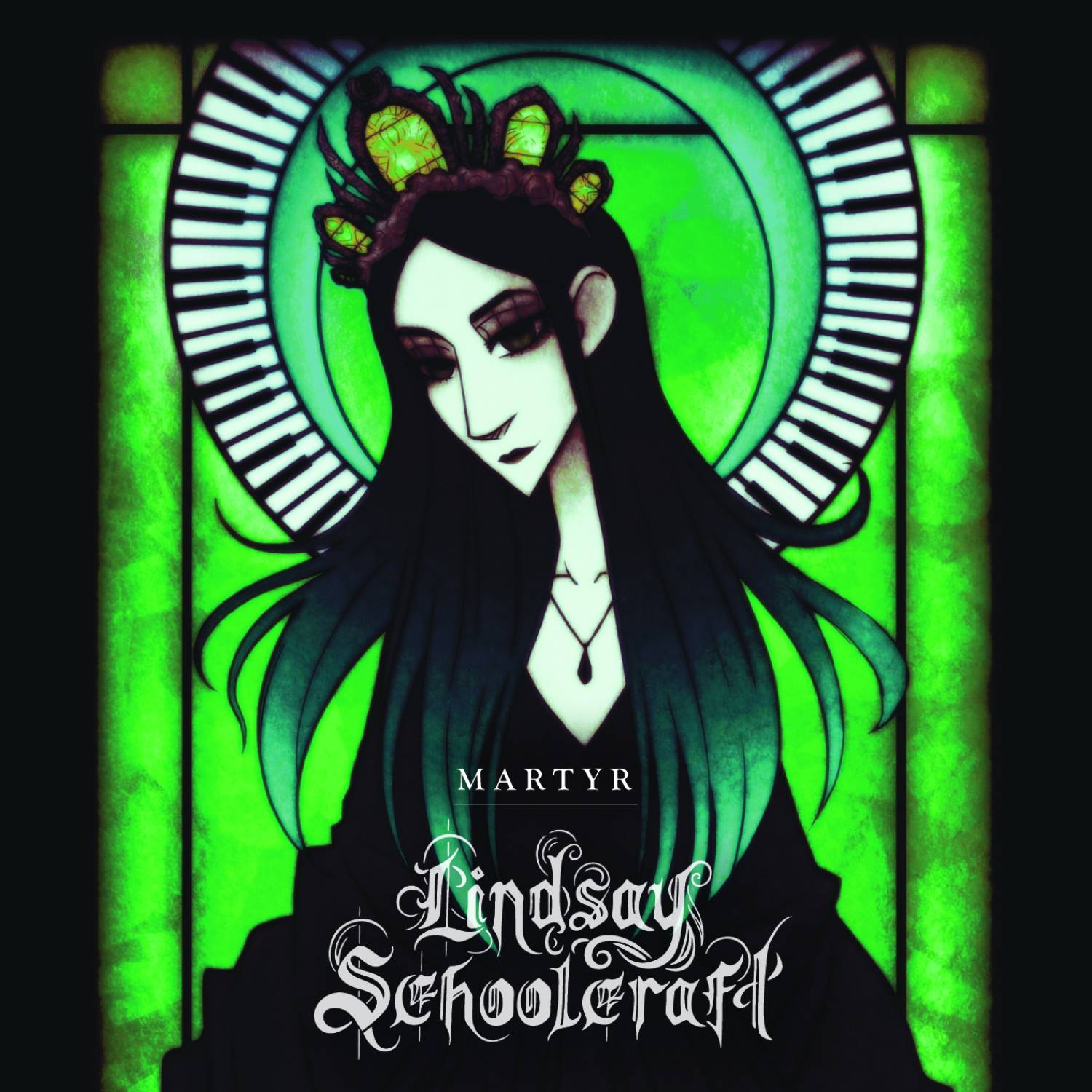 How involved are you in the songwriting for Cradle of Filth? Are you there writing alongside Dani and the rest of the band?

Schoolcraft: “Not really. I come in and sprinkle ideas where I feel they could fit and sometimes they stick and sometimes they don’t. Dani does all of his lyrics. I do however get the pleasure of reading his lyrics first and giving some feedback, but I doubt I’ve ever been an influence because he is usually confident in knowing exactly what he is going for.”

Enough about Cradle of Filth for now because there’s a lot to speak to you about with regards to your own music and your debut solo album Martyr. How long have you been wanting to do a solo record now?

Schoolcraft: “Since high school actually. I just never in all my wildest dreams thought it would be with Rocky Gray though.”

Did you always foresee yourself as a musician who would be more of a solo artist or were your original goals more in line with being one member of a band?

Schoolcraft: “I always masked my want to be a singer and songwriter behind a band and that is probably the reason why my two old bands fell apart. I’ve always had a clear vision about things and wanted to make this happen for myself more than anyone else. Being in Cradle of Filth is like being part of a machine that doesn’t stop moving. Being a solo artist has allowed me to show what I have always really wanted to do with music, lyrics, and visual. I feel really good now about having this freedom.”

Watch the lyric video for “Where I Fall,” also off of the new album Martyr:

Was the album written primarily since the release of Cradle of Filth’s last record, about two years ago now? Or have some of these tracks been lingering for several years now?

Schoolcraft: “I started working on these songs at the beginning of 2016, so just in the midst of Cradle working on Cryptoriana. I was going back and forth between the two and trying to submit ideas where I could. Songs like ‘Stranger’ and ‘Into The Night’ have been in the works for quite some time and Dawn has been a piano instrumental as long as I can remember. But everything else on this album is new and was written between 2016-2018.”

If you had to describe Martyr as an album in only a few sentences, what would you say is the main theme or narrative behind it?

Schoolcraft: “Martyr is a tribute to all the things I love about gothic rock and nu-metal. It has hints of nostalgia from the early 2000s. The theme is about finding yourself and your worth and truly standing up for what you believe in.”

You worked on Martyr with Living Sacrifice and former Evanescence drummer Rocky Gray. How did you end up collaborating with Gray and why did you feel he was the right person to work with on this record?

Schoolcraft: “He has been someone I’ve looked up to a very long time. He came into my life right when I really needed someone like him to guide and help me. We started working on songs together and I knew it was a fit right away so we just kept going. It was only going to be a few songs and then it turned into a full album.”

Covering The Cure, Schoolcraft gives us her own rendition of the classic song “Lullaby” with this recently-released lyric video:

It’s obviously a lot different going from being one member of a six-person band in Cradle of Filth to being the one in the forefront like you are when releasing your own record now. Has this been a weird transition for you at all?

Schoolcraft: “Not really, since I was the front person to my two previous bands. Coming back to it feels great and natural and I feel way more experienced and like I can finally do this right and the way I have always wanted to.”

A lot of singers don’t receive an actual academic education in music like you did with the Royal Conservatory of Music in Toronto and at Toronto’s York University. How valuable do you think this actual musical ‘training’ has been for you now well-established in your industry and career?

Schoolcraft: “I am so glad I pursued this in my 20s when I had more time on my hands. It has helped me greatly. Theory was so god damn boring, but now it is a second language to me. I hope to one day return to my studies and finish them so I can be a vocal teacher. It’s honestly so important to any musician wanting to be taken seriously. I am a slow learner but you can read and writing theory within a year if you really commit to it.”

To finish things off, what plans do you have in the works in order to promote Martyr? Do you have live shows planned?

Schoolcraft: “We have some live shows close to home ready to go for December and we are looking into some other potential shows for the spring before Cradle gets moving again. All updates will be on my sites and social platforms.”