Isaias Gil may not be a name that suddenly jumps off the page at you, but lest anyone think we’re introducing you to an up-and-comer, well think again. While not necessarily attached to just one act or band, Gil has been one of the most active drummers in popular music over the last decade. And Gil’s true talents are clear when you look at the wide range of drumming credits which he has accumulated over the last several years.

The list of live and studio stage collaborations that Gil has been involved in is nothing short of incredible, with some of the most popular names being the mutlti-Grammy-winning Macy Gray, Van Halen legend David Lee Roth, Christian group Salvador, country group Charlie and The Regrets, Americana artist Grand Old Grizzly, surf-rockers Thunderado, and perhaps most prominent of them all, the punk rock legends Black Flag. Gil has also played live with Travis Barker of Blink 182 and Stephen Perkins of Jane’s Addiction. Could we name anyone else to impress you?

Originally from Acapulco, Mexico, and later moving north to Houston, Texas, one of Gil’s first breakthroughs came when he won first place at the well-recognized 2010 edition of the Guitar Center Drum Off. Soon after, he started to build his career as a session drummer, which has led to endorsements with Vater Drumtsticks, Q-Drums, Evans Drum Heads, Puresound, Ultimate Ears, Ahead Armor Cases and Meinl Cymbals. In his spare time, if you can believe he has any, Gil is also involved in music education and works, when he can, as a private instructor.

Check out this drum video called “One Take Till The Stick Breaks”:

Over the course of August and September, Gil was out on tour with Black Flag, as the band traversed the United States for six weeks. In a recent chat we had the pleasure of conducting with Gil, we spoke to him more about how he came to drum for Black Fag and his time out on the road with them, how he likes to set up his drumset, and the versatility needed to play with such a wide spectrum of artists.

You just recently wrapped up a tour with the legendary Black Flag. Congratulations! How did you wind up working with such an awesome band such as Black Flag?

Isaias Gil: “Thank you so much! We just wrapped up some festivals and a U.S. tour. We are currently in the UK still going at it. Then comes Tokyo and Hawaii and a few more U.S. dates. I’m way grateful to Mike Vallely, who was my point of introduction to this crew. I was one of a few of Houston-based musicians that played with him for some shows in Texas and Norway. When Black Flag started looking for a drummer, my name came up. I can only imagine it was thanks to him. I never, in a million years, thought I’d be part of this legendary band.”

As a drummer, what would you say is the greatest challenge in playing live with Black Flag?

Gil: “The greatest challenge has been keeping the energy and intensity from start to finish. Once we start it doesn’t stop. Every song goes into the next. I get a break during bass intros and when Mike introduces the band, but that’s toward the end of our set. It’s a great workout though!” 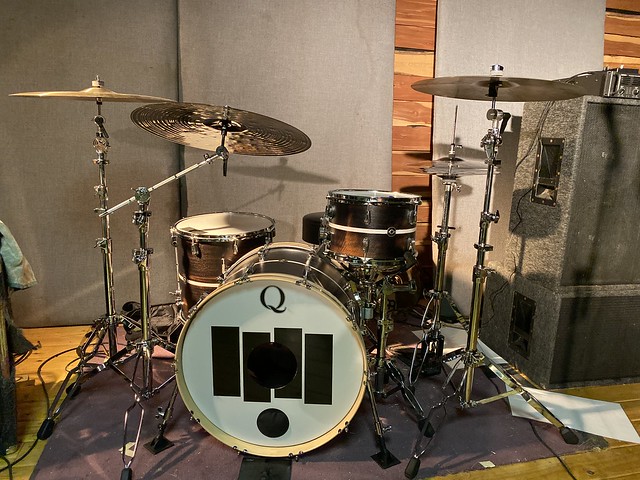 From a drummer’s point of view, what do you enjoy most about playing with Black Flag?

Gil: “I really enjoy tying things together. We don’t use a click or any timekeeping aid other than one another. It’s fun to hear where everyone is feeling the tune and then finding the pocket within that. It’s also so much fun to just hit hard.”

Describe your drum set to us. What types of drums and sticks do you use and roughly how long have you been using this set?

Gil: “I’m playing a 12″, 16″ and 22″ Q Drum Co. mahogany/poplar/mahogany kit with maple reinforcement rings and a 6.5 x 14″ aluminum plate snare. Everyone at Q is amazing and I believe that their traits as humans translate to the amazing instruments they build. I use Vater H220 drumsticks. It’s my favourite drummer’s (Josh Freese) signature stick. They’re the best! I’ve been with both companies for over five years at this point. I freakin love ‘em!”

What are the most significant advantages and disadvantages of this set?

Gil: “I thought that the shells might be too dark or quiet for this type of music. However, I was WAY wrong. They work great and have a wide tuning range which allows me to tune them up and get a nice attack from them without losing the body. I haven’t found a disadvantage to be honest.”

Isaias Gil Performing at the 2011 Drum Off Regional Finals:

Do you have any particular quirks about your set and the way in which your drums are arranged that you can let us in on?

Gil: “I set up a little different, but nothing out of this world. I took a lesson with Brendan Buckley a few years ago and he helped me with having the drums work for me rather than me fighting to work on the drums. His approach was: seat first, then pedals (your feet alignment), then drums. This approach naturally shifts the bass drum over to the right and at an angle. It’s different than most drummers, who set up their bass drum centered and flat (facing the audience). With Brendan’s approach, the drummer faces forward and the bass drum is at an angle. From there, it’s all pretty common, with the exception that I play drums pretty flat and at a slight angle away from me. I do that in order to address some back issues because it forces me to always sit upright and not slouch. I guess I have a lot more quirks than I thought.”

Gil: “Oh man! I have way so many! I’ve had a Hi-hat clutch break halfway through a song that required some open/close work and busted a few bass drumheads. However, the worst for this run was in the middle of ‘Slip It In.’ We all take solos during the song (guitars, bass and drums), and about halfway through the last chorus, just before the big guitar solo and outro, my bass drum pedal comes COMPLETELY off of the bass drum. The hoop had cracked or something and the pedal was no longer attached. I tried all I could to lean into it, but there was clearly something wrong. I ended up playing some bass drum patterns on the floor to just try and keep it going. Thankfully, everyone was kind and forgiving, but that stressed me the hell out! Trying to calm down after that and stay engaged for the rest of the set without worrying it would happen again was hell too.”

From rock to punk rock to country to pop artists, you have contributed drumming for about as wide of a variety of artists you possibly could. Do you find it challenging or difficult to have that necessary versatility to always be changing up your style?

Gil: “I don’t really think about the changes. I am into all types and styles of music. I see it as a conversation. When I’m playing with a group of friends, we are just speaking about a certain thing (country for example). Then I’m with other friends and the conversation is pop. All of them seem genuine, real, and fun to me because I’m engaged in the conversation. I’m not thinking music genres when we get to play.”

As a drummer, what artist that you’ve collaborated with would you say posed the most significant challenge to you as a drummer?

Gil: “My biggest challenge is getting out of my head with everyone that hires me. I try to be present, but I over-analyze a lot at first (body language while we are performing, all sorts of mannerisms). It’s helped at times, but it’s also something that I now know can only be developed through time.”

Finally, if you could drum with any drummer, dead or alive, who would it be?

Gil: “I wouldn’t want to drum with any of these drummers because I’d be too nervous and intimidated, however, I’d love to have Papa Jo Jones, Josh Freese, Vinnie Colaiuta, Dave Grohl and Jon Theodore in a room and just listen to them chat about life, drums, whatever! Those are my biggest heroes and I bet I’d learn a lot more seeing them being themselves off-stage than if we all drummed together.”