Ahead of his upcoming U.S. and U.K. trek to close out 2019, East Nashville, Tennessee-based modern Americana-Folk artist Darrin Bradbury has released his mini-documentary video entitled “The Life of an Opener.” As evidenced by the video which was filmed at Ponte Vedra Concert Hall, and Bradbury’s music in general, he infuses his songs with satire and humorous stories, something he likens to standup comedy. “I try to write things that make me chuckle, and that chuckling is usually making peace with the existential dilemma of both the times and life in general. A lot of times, it’s like a challenge. It is like, ‘All right, I’m starting this song off about squirrels, comparing them to Romeo and Juliet. Can I bring this sucker home? Can I make that idea work?’”

Bradbury’s latest offering, Talking Dogs & Atom Bombs, was produced by Kenneth Pattengale of The Milk Carton Kids and is his first released via ANTI- Records. The accolades and streams are racking up, which helps to explains Bradbury’s extensive touring schedule which will see him on the road for most of the rest of 2019.

Speaking of the new album, he commented: “In the writing of this album, what was important to me was that the song was over when the thought was over. It wasn’t about having to fill a certain amount of space. If I’m not motivated to say anything more about this particular thing, I won’t force it. I would rather have a minute-and-a-half song that I felt conveyed something unique.” 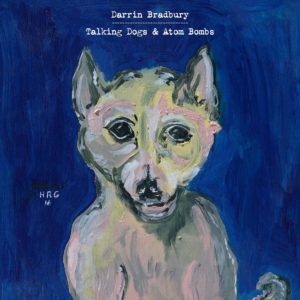