Most careers as recording artists don’t start the way that Blaine Sharp’s did, but Sharp isn’t just any usual musician. To most, Sharp’s life was as close to perfect, but unless one feel’s fulfilled, then what is it all worth? The Canadian-born artist had already achieved his dream home, a great stable of family and friends, a well-rounded career, and the time to travel the world as much as anyone could dream. But, being a musician at heart, it was not quite enough for Sharp. Even in his spare time, he maintained an unwavering interest in music, which ultimately drove him to make a massive life change.

In 2017, Sharp moved to Los Angeles as a middle-aged man and began to truly pursue his dream of being a full-time recording artist. It was a huge gamble that most people wouldn’t, but Sharp did and what has come of it is the release of his debut record, ’(stream/purchase via Bandcamp, iTunes or Spotify). The album is a wonderful display of the lifetime of creative influence to which Sharp has been exposed. It demonstrates a great vision for any artist’s first release, showing a musician unafraid to move across differing genres, indicative of both Sharp’s talents and courage to do what he wants, even on his first proper release.

Wanderlust is the first giant milestone for Blaine Sharp in what promises to be a long and productive musical career. With his unconventional story and wide-ranging talents in mind, we caught up with Sharp for an interview about his new album, his love of travelling and how it makes him a better writer, plus his remarkable and unconventional path to musical recognition in his 50s. If you have ever been deterred from pursuing your dreams in life, simply look to Blaine Sharp for proof that it is never too late to follow your heart and fulfil your destiny.

I wanted to ask you first about your very scenic music video for the title track to Wanderlust because it really is something. It’s a beautifully shot video that I think really fits very well with the sound and spirit of the song. What beach was it shot on?

Blaine Sharp: “Thanks so much. In fact, the beach we filmed on is only about ten minutes from where I’m living. It’s at a state park called Bolsa Chica in Huntington Beach (the famed ‘Surf City’ town the Beach Boys sang about). It has great views of the Port of Long Beach in the distance, and the right feel of ‘urban’ and ‘beach’ that I wanted to capture.”

It’s noteworthy that the definition of wanderlust is “the desire to travel.” Is travelling one of the real great interests of your life?

Sharp: “It truly is. Travel has expanded my mind and heart in so many ways, providing an enormous source of memories, experiences, and inspirations. As a writer, this is gold to be mined.”

I know this is a difficult question to answer, but if you had to select your favourite place that you’ve ever travelled to, where would it be?

Sharp: “I never tire of France. I went on a school trip at 16 and was hooked for life. It’s my happy place and I feel very much at home when I’m there. I’ve been fortunate to travel quite extensively throughout the country and still feel that I have so much more to explore.”

Now the release of Wanderlust also happens to be your debut solo record. There’s no age on when you have to start any career, but typically speaking, musicians get to their debut album perhaps in their 20s. Why now was it the right time to release a debut album?

Sharp: “It’s crazy isn’t it? I can’t really give you an answer except to say that this is my life journey and the timing is what it is. There’s a small part of me that wishes I’d been able to embrace my music career earlier but mostly I’m just so glad that I get to have all these amazing experiences and accomplishments in my life now. It’s like a rebirth in a way… and at this stage in life, I am taking nothing for granted, I’m so grateful for every moment.” 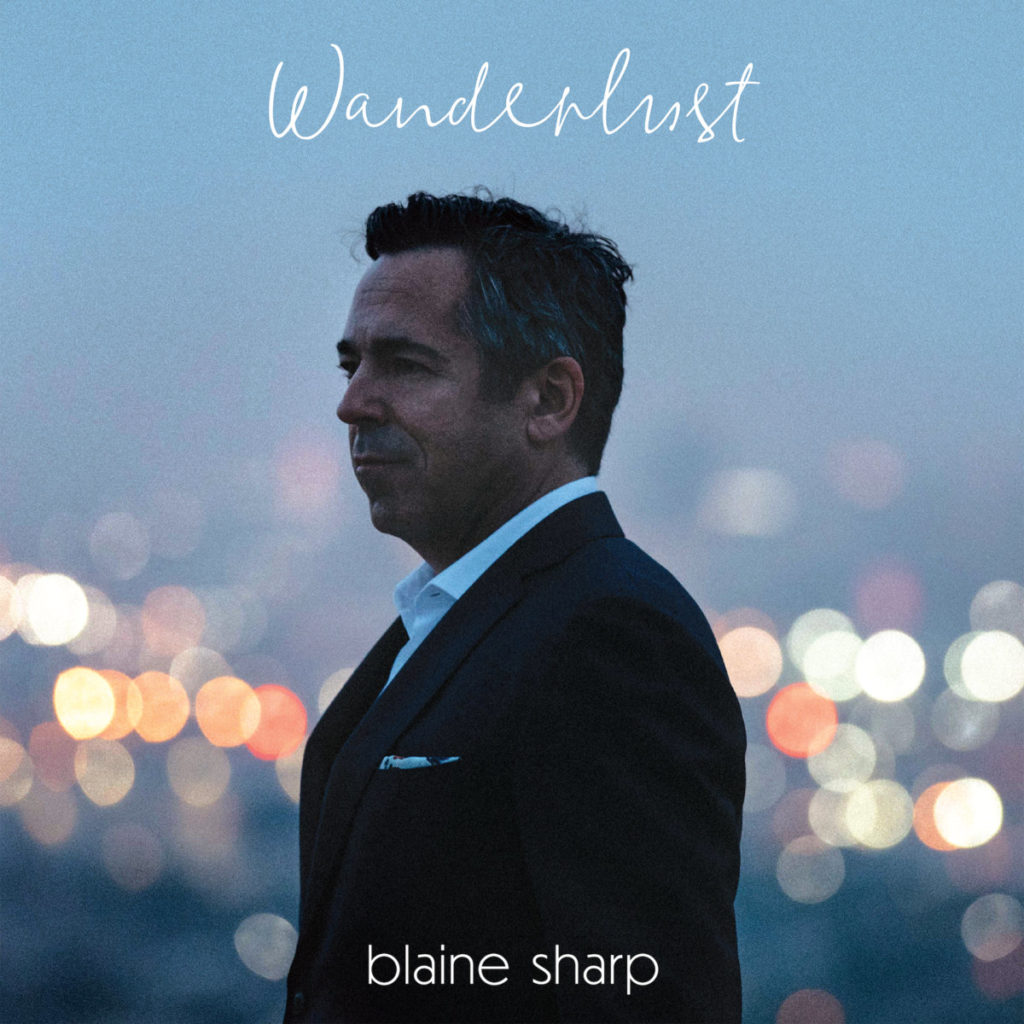 You had a successful career outside of music which you bravely put behind you to pursue music more full-time. This had to be a very difficult decision. What were some of the contributing factors that led you away from your other career to where you are now?

Sharp: “In retrospect, I think I was ready for a change. When the opportunity came to make the move to L.A. there was never really any question. Maybe turning 50 was a factor too? It was time to turn the page and start a new chapter in life. I’d never had the opportunity or freedom to make such a change in my life before, and I knew I just had to. I’ve always had music within me and felt that it was time now, or never, to prioritize it.”

Over what period of time were the songs on Wanderlust written? Have any of these been songs that you had started to work on many years ago, or are they all recent creations?

Sharp: “My lyrics for the two original songs came quite quickly to me. I find this to be the case when inspiration strikes, thankfully. We conceived of and worked on the album over a period of about six months in total though, deciding on material, arranging and rehearsing. Interestingly though, my lyric for ‘Le Vent d’été’ which is my French language take on ‘Summer Wind’ (recorded by Sinatra among others) was written some twenty years ago. It was scribbled on the back of a sales plan when I was working the graveyard shift in a telemarketing office. I found the lyric when I was packing to move to L.A. and something told me to hold onto it. When we were looking at material for Wanderlust I handed the lyric to my arranger, we played it through, and he loved it. I just can’t believe it’s come to fruition all these years later on my album and I’m very proud of it.”

There is a connective theme that runs all the way through Wanderlust, one of restlessness and yearning. Was this provoked by your restlessness to finally jumpstart your musical career?

Sharp: “Yes, this is essentially the general ‘head space’ I’ve been in these past few years. Leaving a settled life behind to hit the road and chase a dream is such a momentous choice to make and it’s had such a huge effect on everything, including my work. It has definitely been a huge influence on much of how Wanderlust took shape, the themes, the lyrics and the romantic, optimistic feel of it all.”

A couple of years ago, you moved to Los Angeles, at least partially at the urging of your husband. What made you decide L.A. was the place for you at this point in your life? Was it to further pursue your music?

Sharp: “Yes it felt like the ideal place where both of us could pursue our dreams while living in the perpetual warmth and sunshine that is southern California… and in terms of shaking things up, we just couldn’t think of anywhere more removed from our ‘normal’ than Cali.”

Now you were born and raised in Canada, and we just so happen to be a primarily Canadian-based publication out of Toronto! Whereabouts in Canada did you primarily grow up?

Sharp: “I was born in Toronto and then grew up moving progressively westward in the GTA, grade school in Mississauga and high school in Oakville. By the time we left for California, we’d been living in downtown Burlington for over twenty years. I’ve also lived in Hamilton and Kingston. I got around!”

I understand that you live part-time in both Los Angeles and Toronto? How do you split your time between the two cities throughout the year? Is L.A. more your summer home?

Sharp: “No I come and go at will. Whenever I’m homesick or missing family I jump on a plane. I also go wherever the work is. If I have a gig or opportunity in Toronto or L.A. it’s just a flight away, and this is pretty common in entertainment. It’s kind of nice to have the best of both worlds.”

Before wrapping up, I just wanted to quickly ask you about your acting career because aside from music, you are also an actor! What are some of your acting credits for our readers who may want to check out your other talents?

Sharp: “My background is primarily theatre so film and TV is something I’m pursuing now too, in both Toronto and L.A. I did quite a lot of ‘unpaid’ film gigs while waiting for my green-card which has been such a great learning experience. It’s also been a great networking opportunity; I had so many people volunteer to help me out when it came time to do my video.”

Behind the Video: Unpinnable Butterflies Offer an Inside Look at the Clip for “Sweet Loretta”