It’s a momentous time in the musical career of Gothenburg, Sweden’s experimental singer-songwriter Emanuel Tägil, as he embarks on the first huge step with the release of his self-titled debut album. Out October 24th (stream now on Spotify), the recording is a genre-defying piece of work in which Tägil delivers some strange and peculiar stories which bridge together over top the diversity of his musical background and interests. It’s a highly atmospheric slice of originality which will remind you of absolutely nothing you’ve heard lately, or likely ever before.

Tägil has loaded up his musical palette for his debut, mostly from his dedicated interests in 1980’s synth music, post-punk, 1990’s black metal, particularly out of Norway, lo-fi folk, and even church music that you only typically would hear on a Sunday morning. He has been described as a “master of atmosphere” which essentially sums up what you’ll experience through the eight tracks of his self-titled debut. It’s an album that requires full attention and immersion that would be perfect for a quiet headphone experience.

Tägil has taken the meaning of singer-songwriter and completely reinvented your expectations when it comes to that “genre” of popular music. Since we strive to bring you the most diverse and original music we can possibly find, we caught up with Tägil to share a special track-by-track rundown. Read on as the man behind the music gives you a full look into how his debut work came to be.

Watch the official music video for “Never Let Us Go” to experience the song in a whole different way:

01. “Attic”
– This song starts out kind of mellow and builds up to an epic climax. “Attic” is a strange song about a person crashing down mentally at a party.

02. “Serenity Now”
– “Serenity Now” is the most energetic and upbeat song of the album. “Serenity Now” is a song about a party crashing. It’s also about a hero called Serenity Now who helps cleaning the house, comforting the party host. The words ‘serenity now’ are also a desperate cry for peace of mind, famously shouted by the character Frank Costanza in the 159th episode of the classic sitcom Seinfeld. The plot of the song is fairytale-like and abstract. I wrote it out of frustration and desperation regarding the climate changes and the overall political climate in the world. It’s probably the most energetic and upbeat song I’ve written to date, I think it’s a kind of ”frustration shake out song.”

03. “House In The Distance”
– This song is a bit more minimalist, at least at first. Dark and gloomy. It’s about a person watching a house in the distance through a window. The house appears to be flashing in the dark, someone inside is turning the balcony lights on and off. The ’I’ of the song feels that the unknown person (or entity) in the house in the distance is giving him/her a personal light show, and feels companionship with this “unknown friend, fucking me over with art.”

04. “I Remember Now”
– Surreal and mysterious at first, epic in the end. This song is about two people trying to cope with sleep issues, nightmares and mysterious encounters at night.

Check out the artwork for Emanuel Tägil’s self-titled debut album: 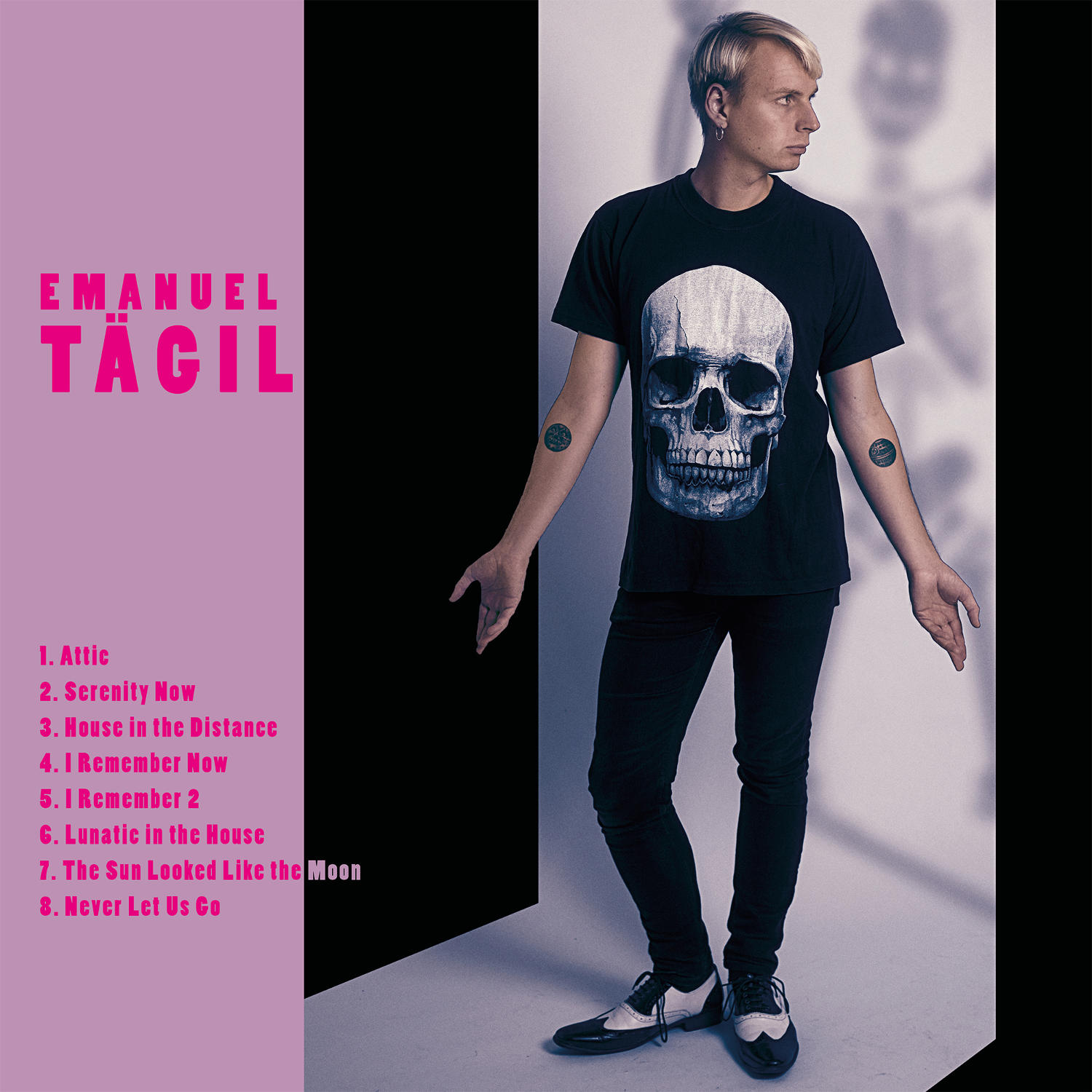 05. “I Remember 2”
– A bit more mellow, this song is a kind of duet between two people (both sung by me) who remembers each other even though they never met in person. They seem to have shared mysterious experiences from their childhood.

06. “Lunatic In The House”
– It starts out really slow, but have a crazy middle section! Almost a bit jazzy. Maybe the strangest song on the album. It’s about a person relying on his/her lover’s dark view on the world for comfort. It’s a kind of love song.

07. “The Sun Looked Like The Moon”
– The “ballad” of the album. Beautiful and melodic! It’s about a person working through life, working every day until the sun and the moon looks the basically same. It’s also about an important encounter with one’s inner self. “I saw a moon down in the well, one of my eyes was looking back at me.“

08. “Never Let Us Go”
– Melodic and rhythmical. Beautiful and strange. This song is about embracing one’s own fear of death since it keeps us from indifference. It’s also about someone trying to prove that he/she have a soul. I wrote this song shortly after reading the book Never Let Me Go by Kazuo Ishiguro. While reading the book I felt that it was about me. Afterward, I had to write this song.

Although it’s not found on his debut record, check out Tägil’s music video for “The Countryside Smiles To The Ghosts,” released last year: