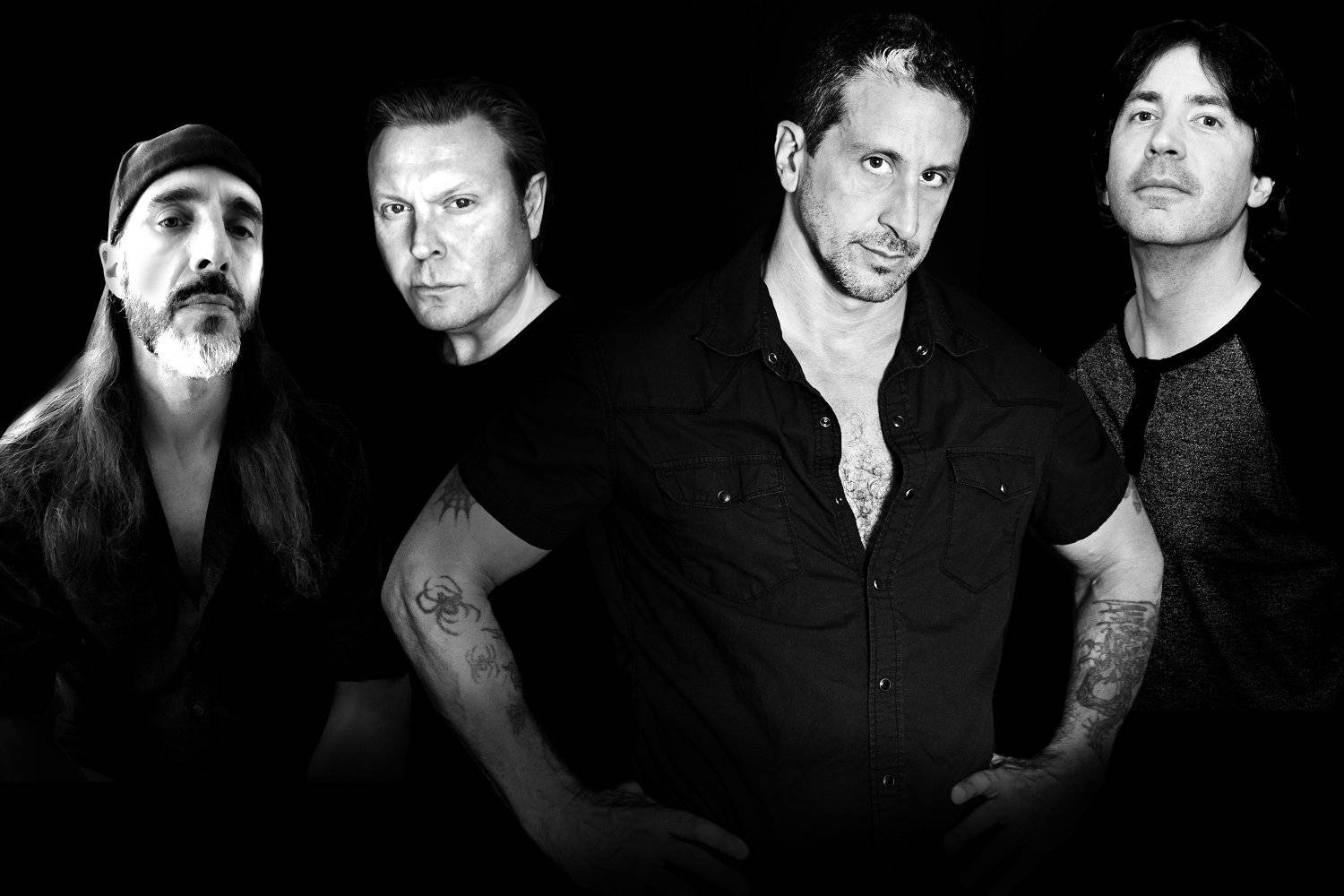 Dark, eerie and aggressive. What more could one possibly want from the progressive rock/metal group Soundscape? Well, the band has returned to unveil some of their darker tones with the premiere of their new “Hourglass” lyric video, which arrives just in time to be enjoyed with the bleakness of the fall and Halloween season. Led by the talented lead singer Rob Thorne (vocalist for the now legendary Sacred Oath), Soundscape may be a familiar name if you’re old enough to remember the 1990s. The band released their successful debut record, Discover, in 1996 and recorded the never-released Grave New World in 1998 before going on an indefinite hiatus. It seemed like there was no end in sight to the hiatus, before the group suddenly reunited last year to record two new and well-received singles; “Insatiable” and “Paradox.” “Hourglass” now marks the third single back for Soundscapes, so I suppose it’s safe to say the band is back is officially back and not just fucking with us!

Defined by soaring melodies and dynamic instrumentation, Soundscape is intent on maintaining the highest level of professionalism in the way in which they write music. Every factor is carefully considered so as to represent the band in the best possible light. From the earliest phases of composition, to how they perform live, Soundscape has always been structured around quality, presentation and efficiency. With this now being the band’s third single back, they are starting to get on a bit of a roll. Accompanying our premiere of “Hourglass,” we’ve included a chat with the entire band to gain further insight into the writing and recording of the new single.

Ok, the question must be asked. How did you write that sick, earth-shattering, distortion-ridden guitar riff? That’s a riff to be reckoned with.

Todd Rose: “Believe it or not it’s a riff I’ve been kicking around for almost 20 years! It was originally intended to be an instrumental, but I LOVE it as a vocal track. It’s not an easy riff to sing over but leave it to Rob to come up with something clever. His eerie vocal line compliments the riff perfectly!”

Can you talk to us about the lyrical content found on “Hourglass?”

Rob Thorne: “I must have written three different sets of lyrics to this song, which is not typical for me. The music came first, and it was eerie, dark… and aggressive. I had different ideas about zombies and fallen angels but in the end, I decided to write in the first-person from the dank corners of frustration, disappointment, and despair. I’m generally a happy and optimistic person, but there isn’t one of us out there who hasn’t been frustrated. There are times in life where you may have felt held back, confused, unfulfilled, or lost. The older you get, the more painful that can be, but it’s important to remember that we’re here for a brief time.

We’re all going to die and we’re all struggling with that knowledge in one way or another. That can depress and paralyze you, or you can seek meaning and joy along the journey. For most of us, it’s both. The tough thing these days for young people is how social media has become a measuring stick for happiness and success. Who’s out there having more fun than me? Whose family looks happier than mine? Those reflections from the modern-day ‘hourglass smartphone’ world we’re living in can really make you anxious as hell. But in the end, it’s all noise.”

“Hourglass” has a sort of dark sound to it, perfect for this time of year. Did you intentionally wait until now to release it to coincide with Halloween?

Thorne: “I guess you could kind of say that. We finished the mix of it at the very end of September and I thought that Halloween would be a fitting release for this song, so we kind of expedited things to get it out by then. So rather than waiting, we kind of put the thumbscrews on our people to get art, video, mastering, and marketing pulled together pronto.”

Time is ticking away… Check out the artwork for the “Hourglass” single: 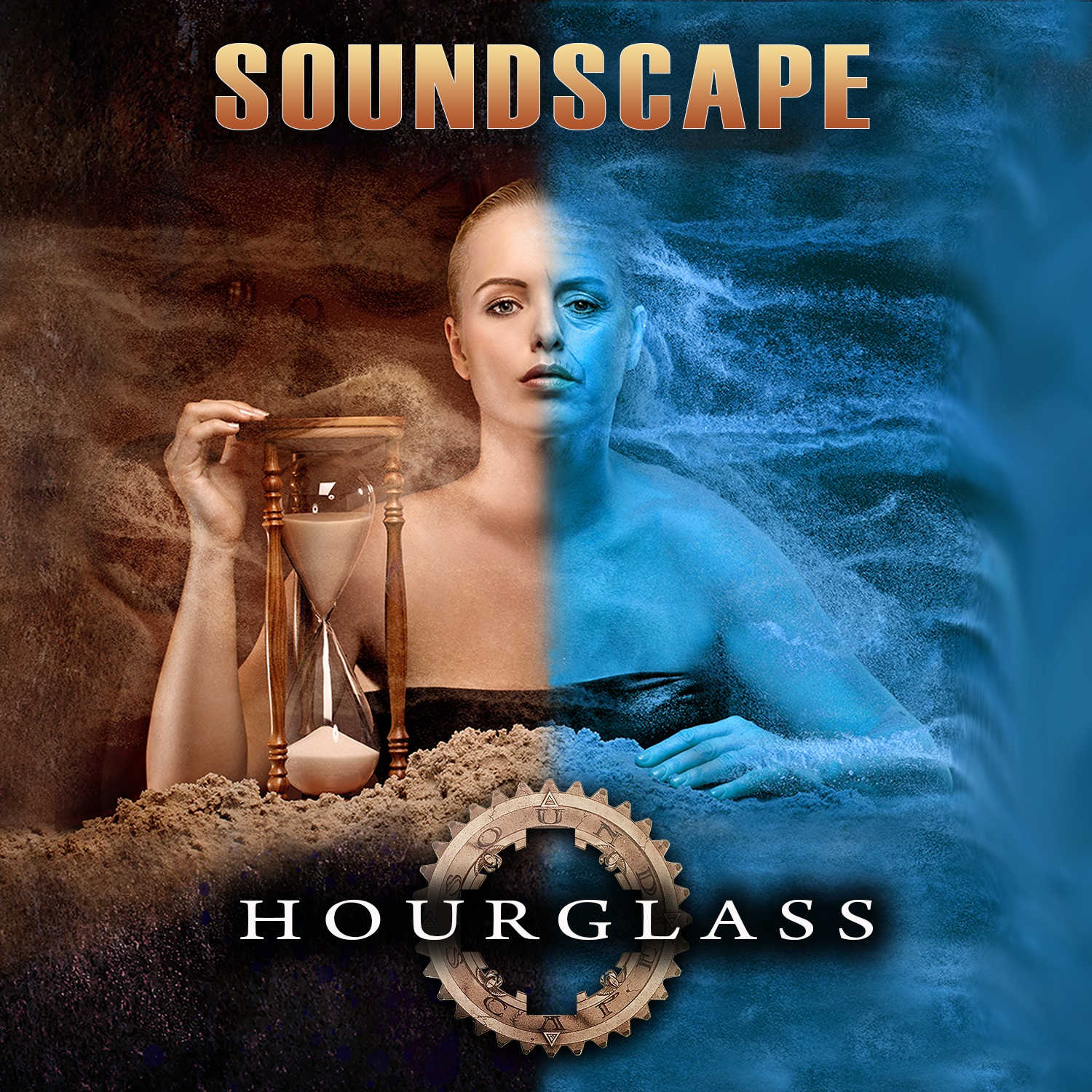 As a song, what’s a special quality about “Hourglass” that made you really want to get this out as a single?

Thorne: “I think in ‘Hourglass’ we were able to pull elements of early-era Soundscape together with the modern production we’re getting in the studio, and by that, I mean that I think we’re finally putting songs out there that sound as good as we envision them to be. That makes ‘Hourglass’ special. All three of these singles we’ve done, really. I mean, I think we all agree that as a whole this is some of our best material. I do hope that your listeners will go back and check out some of our stuff from the ‘90s because it’s worth hearing. But the new stuff, well, we’re all proud of it.”

It’s great to see Soundscape back together again after a roughly 20-year hiatus. What initially brought the band back together after such a long layoff?

Lou Caldarola: “We had always been in touch during the break, we always had such a great connection with each other playing, it just seemed like the right time and the natural thing to do. We got together and the music just happened, we were happily surprised how much music was materializing!”

Thorne “Yeah, but honestly, what really happened was Todd got out of the restaurant business and called me about wanting to play again. The four of us got in the same room and just started to jam, practically as if no time had passed. It was beautiful.”

Rose: “I think we always knew that we would come back together at some point and time. We all get along great and really enjoy each other’s company. I know it sounds cliché but there is a certain magic that happens when the four of us go into a room and play. It’s very instinctual; we just know how to complement each other. For better or worse whatever comes out is undeniably Soundscape.”

Released roughly a year ago, check out the lyric video for “Paradox:”

“Hourglass” is your third single now since reforming, after the release of “Insatiable” and “Paradox.” Now that this is your third song back, is it starting to feel familiar again or does it all still feel so new?

Caldarola: “We had such a great time working together again, it really felt very natural, there’s always been a great chemistry with the four of us. After that first day back, it sort of fell right into place again.”

Rose: “As far as playing and writing together it feels the same as it did 20 years ago except with kids and mortgages (laughs). But the release of each track is always exciting and new. I feel like a little boy on Christmas morning every time Rob sends me a song with his finished vocal lines!”

With three new songs, you know the question is going to start being asked. Can we infer that a new album or at least new EP is on the horizon in the near future?

Thorne “I think that we’ll continue to record and release singles, and when the time presents itself package them all together into either an EP or an LP so that fans can have them as a CD. Who knows what the future holds for Soundscape? There have been inquiries about us performing again… I wouldn’t be opposed to that. But for now, we’re having a great time recording new songs and sharing them. I’m not sure we anticipated any of this, so it’s all a bonus!”