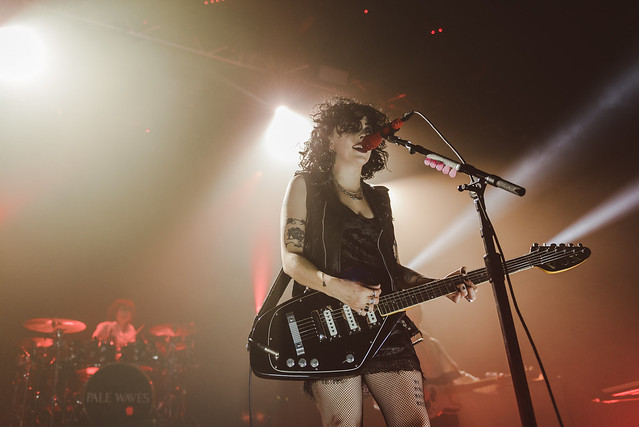 Tonight is the end of a massive chapter for goth-pop band Pale Waves as the touring cycle for their hit album My Mind Makes Noises comes to a glorious finale in their hometown of Manchester. Unsurprisingly then, the Manchester Academy is packed to the rafters as fans pour into the venue to celebrate with the band in style. 2019 has been a breakthrough year for the band with packed tours and unforgettable festival appearances littering their calendar so, let’s face it, there was only one way to sign off this run.

Partying on a Friday night, the band looked up for this one as vocalist Heather Baron Gracie recalls the difference between these shows and their earlier gigs. Since those early days though the band have grown into fully-fledged rock heroes and, armed with a wealth of hits like “Eighteen”, “Television Romance” and “There’s a Honey”, this felt like more than just a gig, this felt like a celebration. Unreleased track “Tomorrow” jammed its way into the set as a taster for what is to come from the band while an emotional “Karl (I Wonder What It’s Like To Die)” took things to another level.

Early next year the band will be back in Manchester supporting Halsey on her UK Arena tour but, for tonight, this was Pale Waves night and, given the hard work and endless miles the band have put in over the course of this album, they simply deserved to close this chapter by giving themselves and their fans a truly unforgettable night.