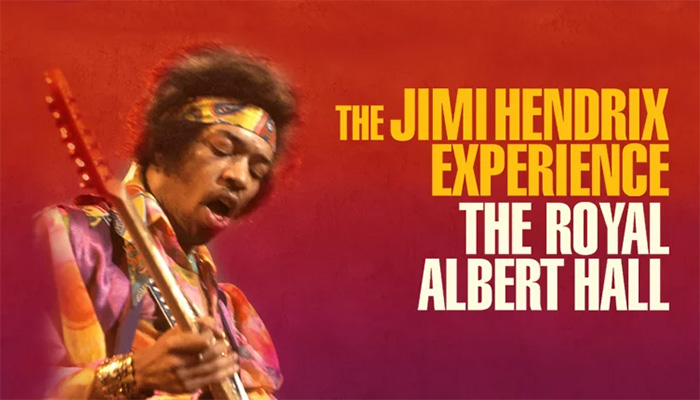 One of the greatest and most anticipated, unseen treasures in musical history will finally be revealed next month in London. The Jimi Hendrix Experience: The Royal Albert Hall, a feature-length film that documents the last European performance of the original line up of the Jimi Hendrix Experience will be screened to the public for the very first time since it was shot 50 years ago at the very location where it was primarily filmed: London’s historic Royal Albert Hall.

The surprise announcement came from Experience Hendrix L.L.C. and The Last Experience Inc which have partnered on the event set for the evening of Monday, October 21. Experience Hendrix, headed by Janie Hendrix, is the family owned company that administers the rights to recordings, performances and publishing associated with the late superstar. Last Experience Inc. is the production company, led by Jerry Goldstein, that originally partnered with Hendrix and documented the legendary performance on February 24, 1969.

The Jimi Hendrix Experience:The Royal Albert Hall has long been considered the holy grail of ‘lost’ films. It has never before been released on any format nor commercially screened anywhere in the world. It has remained unseen and been the subject of death, litigation and intrigue since its creation fifty years ago.

Check out the trailer for the movie here:

The film presents an extraordinary performance by the Jimi Hendrix Experience and also chronicles the hours leading up to the concert with the crew granted unprecedented access to Hendrix and his team throughout the day that preceded the performance, including backstage goings-on and a post-show reception. Producer Jerry Goldstein had the famed Royal Albert Hall theatrically lit as if it were a movie set, resulting in a richly detailed film free of the primitive concert lighting of the era and bizarre camera zooms and pans that poorly served other films from that era.

This screening is a strict “One Night Only” experience for fans as there are no current plans for a further release of the concert. Featuring a state-of-the-art sound system and giant screen, the show will be as close as you can get to seeing Hendrix perform on that prestigious stage 50 years ago.

While stray clips have irregularly surfaced on various bootleg markets, over the years, the authorized version to be screened at the Royal Albert Hall has been meticulously restored with remastered sound and colour-corrected picture.

To prepare the film for this unique anniversary event, Jerry Goldstein and Glenn Stone of The Last Experience together with Janie Hendrix and John McDermott from Experience Hendrix painstakingly restored all of the original 16mm color film elements and prepared this feature length presentation. The film’s soundtrack was mixed by Eddie Kramer, Jimi Hendrix’s longtime recording engineer.

The original concert is one the most legendary performances by Hendrix and the original iteration of the Experience. Chris Welch reviewed the show in Melody Maker one week later, writing, “When he broke into “Purple Haze” feet pounded the hallowed floors, and whistles pierced the Victorian dome. The Hendrix electricity was still working, adding “the lengthy performance stretched his improvisational powers to the limit.”

Jane Simmons discussed the sell-out audience’s reaction when the band initially left the stage: “The crowd then went absolutely berserk and shouted for more for about 4-5 minutes. Some people started to leave as it didn’t look as though they were coming back, but they did and then they went absolutely… well, there is no word for it! People were dancing in the aisles. Jimi went mad with the atmosphere and they did “Purple Haze” and “Wild Thing”. He played with his teeth and then on the floor…. [the stage] was besieged by fans, police, bouncers, floor managers and practically the entire audience!’

Janie Hendrix commented, “This has been a long time coming but we always had faith that things would work out and the public would see this film that documents Jimi Hendrix at the very peak of his powers. As those who are fortunate enough to see the showing next month at the very place where it was filmed will know, it has been well worth the wait and we are nothing short of delighted. The single word that springs to mind that describes this truly monumental development is ‘historic’.”

Tickets are available from the Royal Albert Hall Box office on Friday 4 October. RAH Friends and Patrons pre-sale from 9am and general sale from 10am on 020 7589 8212 or http://www.royalalberthall.com.