If we can guarantee anything about Detroit band Filmspeed, it’s that they’ll get you moving. The power trio have released their latest track “Need A Rush,” which is a nice description for how you will feel upon hearing this group’s music. Describing themselves, as “two parts Motown, one part Tinseltown,” it’s not difficult to hear the influence that the musical history of Detroit has had on this band. Filmspeed pride themselves on their dynamic combinations of blood pumping anthems, melodic hooks and soulful grooves that mix together to form a unique sound that’s not afraid to borrow from the diverse influences of post-World War 2 popular music. Many bands are very stringent about the sound or style they are trying to create and maintain, but that just doesn’t fit in with the Filmspeed playbook.

Created under a different name by singer and guitarist Craig Broomba, bassist, guitarist and backup vocalist Nick Stout, and drummer Oliver Dobrian, Filmspeed began under a different name back in 2004. The band name was created as a reflection of previous memories of life that tell a story about who you are, from your own point of view. To put it more succinctly, our minds grab certain memorable, unmemorable, happy, sad, and random memories from the past that combine together like cut scenes from a biographical film and as life starts to pick up and get a little crazy as you get older, you start to live more at the speed of a film.

Singer Craig Boomba checked in with a comment regarding “Need A Rush,” stating, “Adrenaline is a fickle friend. There’s a limited amount of rides you could take on the world’s craziest roller coaster before you start looking for a bigger bang. This song talks about the addiction to running at 110 percent. For us, every day on the road is packed full of action. Whether it’s just making it across another state line or trying not to lose your voice right before hitting the stage for the eighth straight gig, there’s constant and often intense stimulation for all the senses. Getting back to ‘normal’ life compares to having a foot bath after you’ve just gone body surfing in a hurricane.”

Fortunately for us, and for you, we caught up with Filmspeed lead singer Craig Broomba to have a little chat about “Need A Rush,” to get his thoughts on the creation of the song, Detroit rock n’ roll, and this whole concept of needing a rush in life. For more Filmspeed, check out their video for “I Feel Alright”, which we hit you with a couple of years ago. See what Craig had to say below and get ready to move and groove.

If falling down an endless hole satisfies this dude’s rush, well, we’re cool with it! See the official artwork for “Need a Rush:” 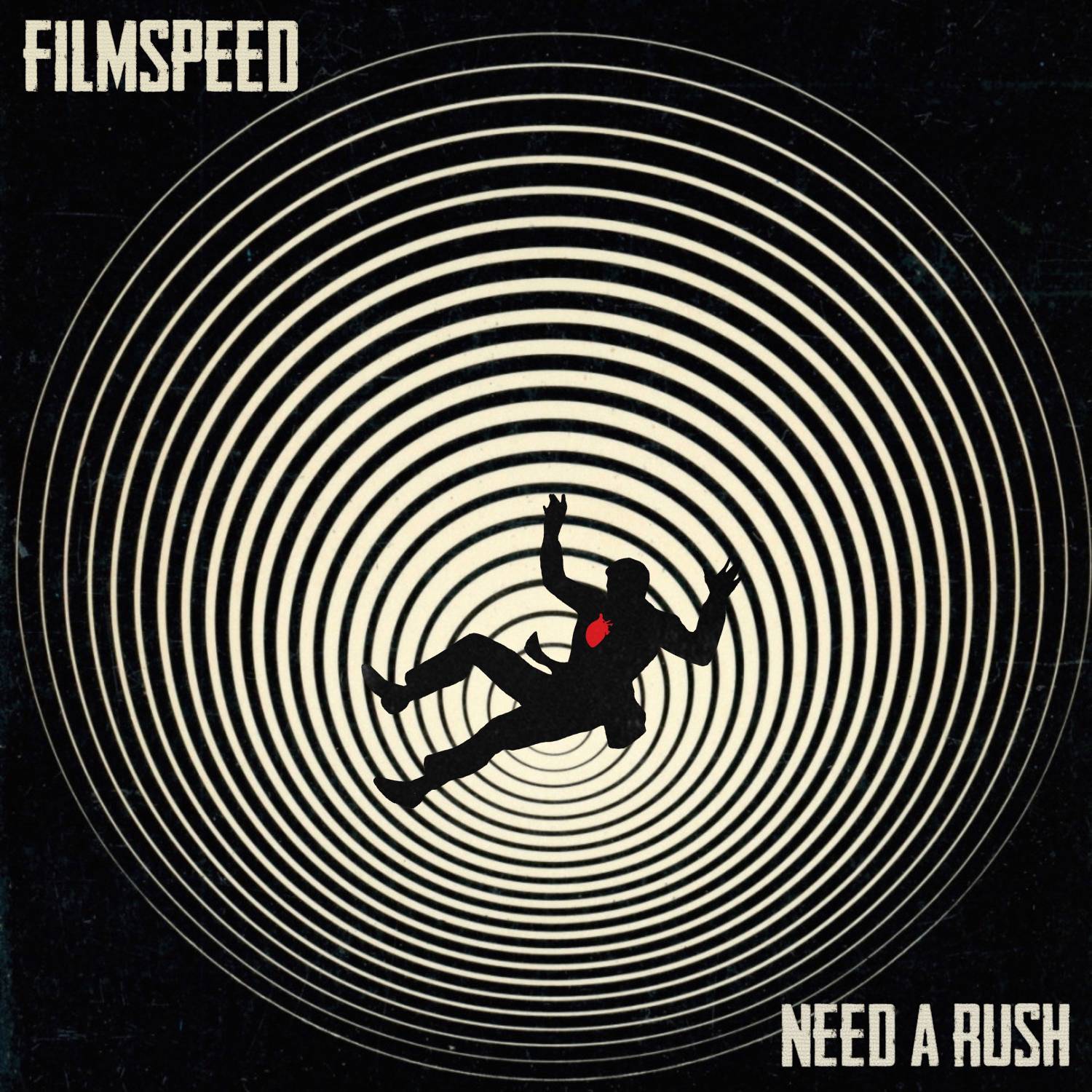 “Need a Rush” is a catchy, groovy, fun little tune that I could see as a real crowd-pleaser at a show. Take us through the writing of the song. How did this one come to be what it is?

Craig Broomba: “Hey, thanks, and you’re right! This one is a blast to play live. Just about all our songs start as a voice memo. This particular one was a riff and a vocal line in a batch of seven other demos and caught the ear of our go-to producer. Once the band took it to the rehearsal rooms, it started to take on this big, driving, pulsing vibe. It was obvious from the dynamics of this track, that it’s a tale of ‘hectic energy.’”

What’s the significance behind “Need a Rush?” Is it just the rush of life that we strive towards or is it more of a physical rush? What exactly are we getting at with this song?

Broomba: “Adrenaline is a hell of a drug. Call it whatever you want, being ‘in the zone,’ or ‘in the moment.’ It’s really about those split seconds where excitement, fear, strength, and clarity all line up to make you invincible. All that being said, it’s not difficult to identify as a hormone junkie. Personally speaking, what do you look towards to satisfying that need for a rush inside of you? Do you find it through some sort of physical activity? Or perhaps just performing on stage in front of a crowd? Ding! Go to a live show and see what we mean, truly.

The majority of the lyrics were retrospective on the non-stop schedule we went through on our winter tour. Between the constant cycle of transit, loading, performance, sleep and repeat there’s little time to think let alone be bored. I think I’d have to run with the bulls in Spain to match the total level of ‘rush’ absorbed from touring. Obviously, we all need a rush in some way, shape or form, but sometimes that stimulation overtakes us.”

How about some more Filmspeed? Check out their spring-released music video for “Bless My Soul:”

Obviously we all need a rush in some way, shape or form, but sometimes that stimulation overtakes us. Do you think that that need for a rush can sometimes become an obsession in life?

Broomba: “Totally. It’s important to remember that everything has limits and nothing lasts forever. There are skydiving instructors who get strapped to your back on your first few jumps. Just another day at the office for these types. I wonder what it takes for them to get nervous. Sounds like a dangerous thing to wear out your sense of excitement. Maybe I’d recommend they play a gig!” (laughs)

I don’t know what it is, but you definitely do sound very much like a Detroit rock band. What is it about Detroit that makes you sound like this? Is it the groove that originally comes from classic Motown music?

Broomba: “That would make sense, since Motown is in two-thirds of our blood (to be fair, our drummer is a SoCal native). From age zero, the city installed those classics in our subconscious. However, not mentioning MC5, Alice Cooper, Madonna, Ted Nugent, Iggy Pop, Bob Seger, Suicide Machines, Kid Rock, Eminem and Jack White would be irresponsible. If there is such a thing having a Detroit-specific groove, then maybe it does all fall back to Berry Gordy. Ultimately, we’re a product of anything and everything that ever really moved us.”