With the state of the modern and mundane radio universe, a “radio free universe” may actually be a good idea. But that’s not what we’re here to discuss today. No, we’re shedding some light on Hamilton, Ontario’s indie rock group Radio Free Universe with the premiere of their brand new song, “She’s High Again,” from their new album Love. Discover both the new recording as well as the band’s previous work both on Apple Music and Spotify.

Sometimes simply referred to as RFU, this quintet began their “indie rock rise from nothing” back in 2010 and have since established themselves as a premiere independent act in not only Ontario, but also Canada as a whole. “She’s High Again” captures two perspectives of the same situation; the light and joyful chorus, with lyrics and vocals provided by singer and guitarist George Panaopoulous, performed from the point of view of “She,” and the dark verses which describe the reality of the situation, played by Panaopoulous. Never will you find a more innovative way of shaking up the typical three-minute, listener-friendly indie rocker that has existed for over half a century.

Aside from the release of Love, lots has been going on with Radio Free Universe over the last few years, including Panagopoulous firing up his own record label Jetpack Records with Mark McMaster, in 2016. This isn’t some silly little imprint label either; it’s a full blown recording facility for Hamilton-area bands. What proved to be the catalyst for the label’s ultimate creation and success was as a result of Panagopoulous converting a century-old urban church into a professional recording facility capable of providing a world-class recording facility for artists who are still developing and finding their sound. The studio was also the location in which Radio Free Universe recorded Love.

As part of our premiere of “She’s High Again,” as well as the excitement surrounding the release of Love, we spoke with Panagopoulos about the new album and we also got some more interesting tidbits about the new single.

Bands and the sound/style they adopt are often influenced by the city they are from. Can we hear any influence of Hamilton in Radio Free Universe?

George Panaopoulous: “For this album, the idea was to respond to emotional experiences as best as we could. For ‘She’s High Again,’ the chorus was written in downtown Los Angeles years ago. There I felt above everything, so connecting to the euphoria of the chorus was easy, but the song was lacking the dark side that it needed. In L.A. I always felt like a visitor or maybe I was just too young to see what I see now. Hamilton today has a very similar vibe to downtown L.A. back then. I was able to write the verses here, pictures of the dark underbelly, that I can see because I feel like I belong here.”

Watch the recently released music video for “Even Angels,” also off of Love::

Take us further into the background behind “She’s High Again.” The song is written from the point of view of a man observing the life of his troubled young partner. Is the song intended to demonstrate the struggle and feeling of powerlessness, sitting idly by, not being able to help even though he is desperate to?

Panaopoulous: “This is about my guitar player and best friend and his wish. It’s a ‘be careful what you wish for’ kind of story. Some time after his breakup with a rising starlet (the girl just ran him over) we were in our downtown loft making yet another record. He’d tried dating and messing around with girls but he was frustrated. He just came out and said, ‘I wish a really hot girl would just walk in off the street so I wouldn’t have to bother dating.’ Well ten minutes later, in walked our subject. They were married within a month.

We were all naïve and had no clue she was on meth. We just thought she was ‘different.’ He stuck by her for years through everything you could think of. I found it fascinating. Years later, like a good Yoko, she split up that project right here in Hamilton. In the studio when we decided that this song fit where we wanted to go as songwriters and producers, all those years of observation combined with living in Hamilton to produce the finished product.”

What was the process behind the writing of “She’s High Again?” Was it one of those songs that came quickly, or did it require a lot of work and thinking?

Panaopoulous: “Both. The chorus just happened spontaneously, before I even knew who or what it was about. From there I tried various versions of the rest of the song, but they were never genuine. The song just wasn’t ready to be finished yet. When the song was resurrected years later, we struggled for a couple sessions trying to write verses that just didn’t work. It was the decision to focus on images that would connect a listener to the subjects, to put them into those places so they can empathize with them, that finally set us on the right course. With the bridge, we were looking for a different sentiment where he was speaking directly to her and forgiving her for not being superhuman.”

How about first, the artwork for Radio Free Universe’s new album, Love: 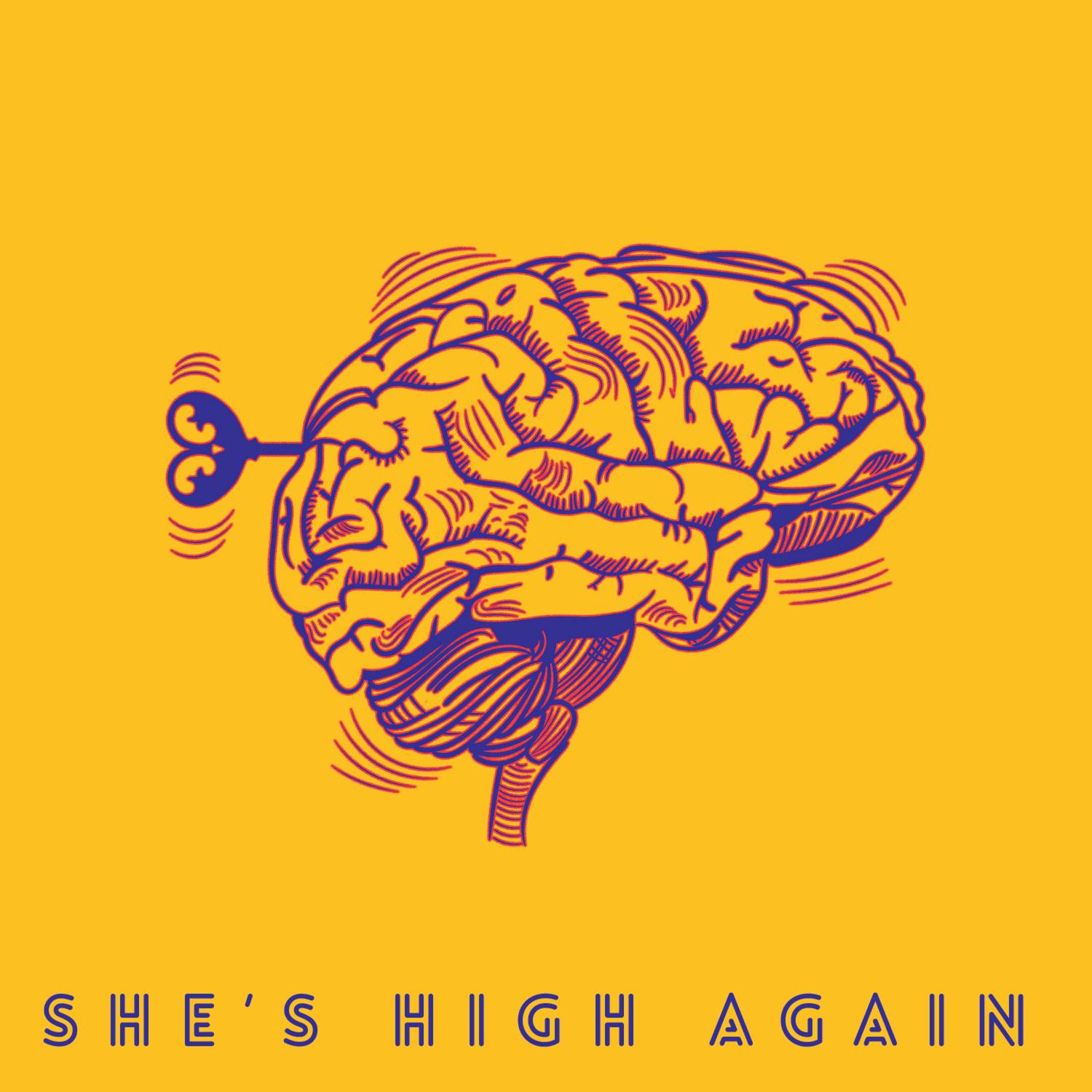 This song was recorded in an old church renovated to become a modern recording facility. Do you think that “She’s High Again” was influenced in any way by the atmosphere and aesthetics in which you were laying down the track and recording it?

Panaopoulous: “The Sanctuary is technically sound first, but every technical requirement was seen as an opportunity to do something aesthetically appealing too. The sum of all of those decisions lead to great-sounding spaces that are inspiring to work in. There is an ease about working there that allows the music to make its own statement.”

How does “She’s High Again” differ from Radio Free Universe’s previous and present material? How representative is the song of the rest of your catalogue, including your new album Love?

Panaopoulous: “To me, genre distinctions are killing music. Old RFU was genre-specific, we wrote melodies on top of riffs. Our approach to this album was very different: the song, words and melody, had to come first. The philosophy applied to production was simply keeping the doors wide open and not letting limitations in knowledge or experience get in the way. You will hear that fully realized on ‘She’s High Again.’ We heard a specific kind of Motown string treatment that we’d never done before, so we figured out how to get it with the help of the right player. The crazy synth part in the chorus is another example, it was clear as a bell in my head but its manifestation took time and research.

We also realized that the song needed the best bass player ever, so we hired him and he joined the band on the spot. There is zero compromise. It is painstaking, but in the end all these songs wanted and needed to exist and so it was easy to lose ourselves in the service of them. In the production process, the songs revealed themselves and they each speak distinctly. Like the children in a large family, they are very different from each other, but somehow the same.”