Chapter Nineteen have just released their Stephen King inspired video “Stephen” so we got the band to countdown through their nineteen favourite Stephen King movie scenes.

First of all though, here’s the band’s video for “Stephen”:

19. Cat’s Eye (1985) – The Opening Credits
– Let’s start with this one because, despite how completely ridiculous it is, it does *kind of* serve as inspiration for what we tried to do with our video – although hopefully we did a far better job! When it comes to subtle Easter Eggs and King references, this fails miserably. The directors clearly felt the audience might not have realised the foam-covered St Bernard was meant to be Cujo, so when the red and white Plymouth Fury then shudders to an emergency stop they quite literally spell it out with a bumper sticker saying “I am Christine”. It’s awful and hilarious at the same time.

18. Christine (1983) – Show Me
Sticking with Christine, this list has to include something from John Carpenter’s version. The way he introduces us to Christine – George Thorogood’s “Bad to the Bone” soundtracking her chomping on the hand of the factory worker – sets the tone for who she is, but this scene where we see her repair herself is quite something. Not only are the practical effects excellent, it’s also a marker to anyone who tries to cross her; she can’t be beaten that easily.

17. IT Chapter 2 (2019) – Mrs Kersh
This month’s IT movie has a lot of good stuff in it – the Paul Bunyan statue coming to life, the kid under the bleachers and the brutal, homophobic murder of Adrian Mellon are all stand outs. But, in terms of all-out creepy and weird, that prize goes to Mrs Kersh. Anyone for tea?

16. Apt Pupil (1998) – March!
Both the novella and the movie for Apt Pupil are somewhat underrated, but both are excellent and just build this sense of dread and horror the longer they go on – not only that, any story that inspired Anthrax to write “Skeletons in the Closet” is worth reading, right? This scene where Kurt Dussander dons his old uniform and is transported back to his former life as a Nazi is utterly chilling – even more so on screen than on the page.

15. Cujo (1983) – “Get back in that barn, damn you”
The adaptation of Cujo is terrific – that dog not winning an Oscar for its performance is a true tragedy. While Cujo’s initial attack on the Trenton car is great from a jump-scare point of view, this scene truly captures what, in the book, is the dog’s inner monologue. Crippled with rabies, just the sound of a phone ringing sends Cujo into a savage frenzy. But remember – he had never meant to kill anyone, he’d always tried to be a good dog.

14. Stand By Me (1987) – “Suck my fat one!”
People often forget that Stand By Me is based on a King novella – he doesn’t just do scary, he’s an incredible storyteller full stop. He also knows when to let the little guys win against the bullies, and this scene is probably the best example of exactly that. To have something that stays so tense even with the line “suck my fat one you cheap dimestore hood” is testament to the drama of the story, the quality and believability of the characters and, of course, the brilliant acting from everyone involved.

13. Pet Sematary (1989) – “Sometimes, dead is better!”
When Louis Creed’s friendly neighbour Jud Crandall sets out exactly what’s special about the Pet Sematary – bookended by the proclamation that sometimes, dead is better – any rational person would surely think against burying anything in that sour ground, wouldn’t they? Well, as it would later transpire, Louis didn’t buy into that nonsense, despite this terrifying tale.

12. Under the Dome (2013) – “The Dome Comes Down”
Ok, so the majority of the 2013 adaptation of Under the Dome is pure trash. But, the season premiere where we see the dome drop out of the sky and slice a cow in half? Yep, we’ll take that.

11. The Stand (1994) – “Don’t Fear The Reaper”
The landmark, mammoth TV adaptation of the equally mammoth tome The Stand is hit and miss but undoubtedly iconic. Perhaps one of its *most* iconic parts is the opening credits, where you see how little Captain Trips has spared – perfectly soundtracked by Blue Oyster Cult. Fingers crossed that the supposed Marilyn Manson cover of the Doors’ “The End” for the upcoming remake takes this slot.

10. The Langoliers (1995) – Appearance of the Langoliers
How do you follow up an epic like The Stand? With the worst CGI ever seen on TV, that’s how! When we finally get to see the dreaded Langoliers in real life, you have to wonder what everyone was so scared of. Look at them! Couple the bad effects with even worse acting and a Simon Pegg lookalike piloting the plane and you’re in for one hell of a bad show. The whole saga is available for you on YouTube if you fancy wasting three hours of your life some time.

09. Maximum Overdrive (1986) – The Vending Machine
Talking things that are so bad, they’re good…let’s chat about Maximum Overdrive. A cocaine-fuelled King directed this one himself and clearly had no-one helping him to make good decisions. It’s an exhausting watch, with AC/DC riffs stabbed at you every few seconds and acting that was bad even for the 80s. But, this scene where a vending machine starts attacking a kids’ baseball team? Let’s just say it’s a bit of a guilty pleasure.

08. IT (1990) – Take it Georgie
Tim Curry as Pennywise in the 1990 miniseries is iconic. This entire list could have been made up of his scenes. But, our favourite has to be this one, where he meets poor Georgie Denbrough. The 2017 remake did an excellent job of this scene too, but it’s Curry’s mischievous glint in his eye that edges it.

07. The Dead Zone (1983) – The missiles are flying
Other than his work in Wayne’s World 2, this is Christopher Walken’s best work – while Martin Sheen as Greg Stillson is exceptional too. This pivotal scene, where we learn what will happen to the world if Stillson gets to be President, is terrifying – particularly when you remember who we have in the White House hotseat right now.

06. Needful Things (1994) – “Nettie and Wilma”
I love Needful Things – the book is easily in my Top 10 King and the mid-90s adaptation is a pretty enjoyable romp too. This scene where you see the devastating consequences of Leland Gaunt’s trickery is brutal and bloody brilliant.

05. The Dark Half (1993) – A Shocking Discovery
George A Romero’s adaptation of The Dark Half is excellent – an underrated classic with some gruesome effects and a terrific performance from Timothy Hutton. The finale of George Stark being carried away by thousands of sparrows is a suitable ending, but this scene where surgeons discover what’s living inside Thad Beaumount’s brain is truly horrific.

04. Salem’s Lot (1979) – “Let Me In”
Despite having dated horrendously, the TV adaptation of Salem’s Lot from the end of the 70s is still an enjoyable watch with plenty of creepy moments – none more so than Danny Glick floating up to Mark Petrie’s window and asking to be let in. It’s still chilling, 40 years on.

03. Misery (1990) – “The Hobbling
Where to even start with this? Kathy Bates as Annie Wilkes was so good she won an Oscar for it, and it’s this scene where everything comes together. Look how cold she is as she smashes Paul Sheldon ankle (a change from the book which, for once, is actually for the better I think). Everything here is horrendous and brilliant – the classical soundtrack, the chilling look in Annie’s eyes and the stomach-turning practical effects that just show you *just enough* of Paul’s foot going in an ungodly direction.

02. Gerald’s Game (2017) – “Degloving”
If you thought being hobbled was bad, wait until you see this sickening scene from Gerald’s Game, where Jessie is left with no other option for escape than to *deglove her own hand*. Nope.

01. Carrie (1976) – “The Prom”
It had to be, right? Arguably the best-known scene from any King adaptation, when Carrie White gets covered in pig’s blood at her high school prom, things quickly turn towards destruction. The blood and prom dress combination are iconic, which is why we *had* to include it in our video too. 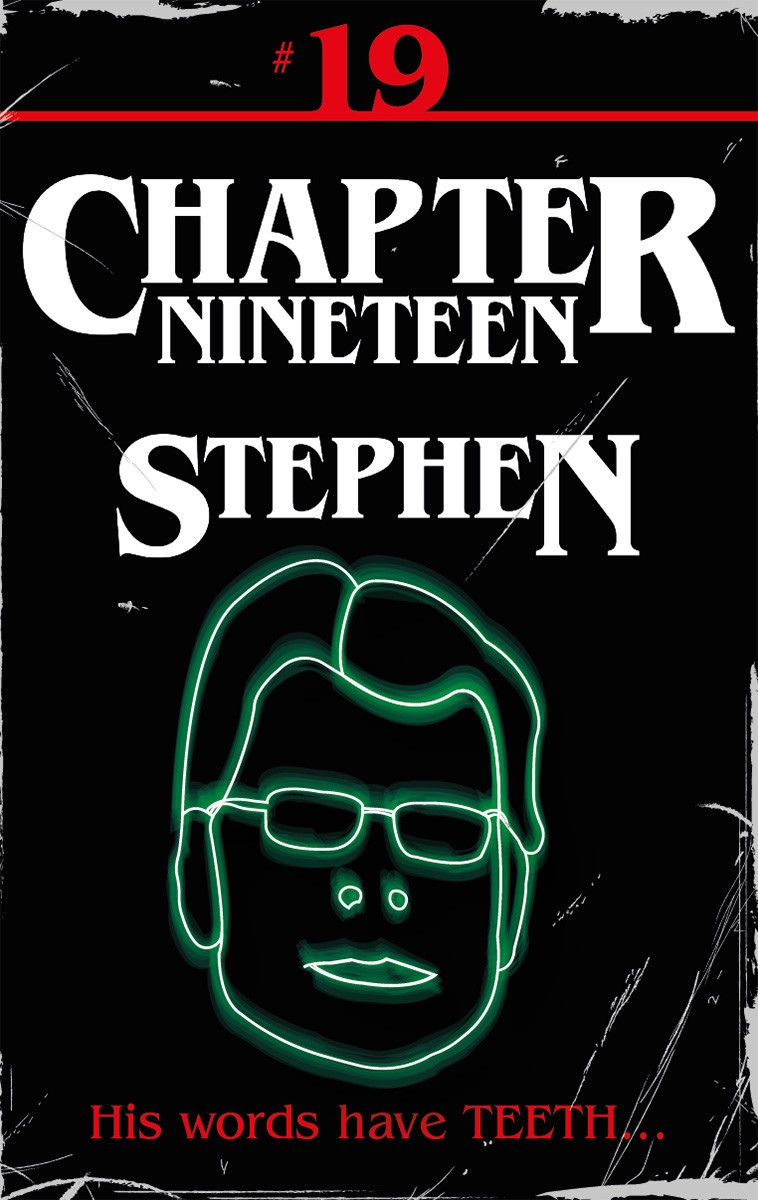