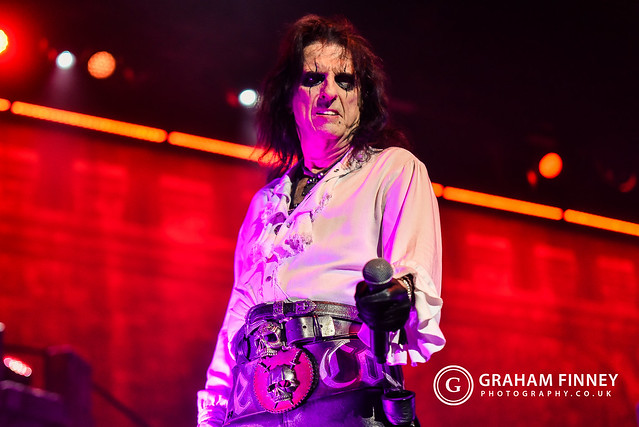 There is no bigger legend in the world of shock rock than Alice Cooper as he is showing on his latest trek around the UK. Still packing out the Arenas, even at this stage in his career, his hardcore following, young and old, are out in force in Leeds where the man himself has been spotted out and about the city centre during the day.

For over a hour and a half, Cooper gives his fans everything they could want from the master of the macabre. Kicking off with the mammoth “Feed My Frankenstein” and through hit after hit from “Bed Of Nails” to “No More Mr.Nice Guy,” the showman struts and stomps around the First Direct Arena stage absolutely owning the place. Helping him along the way, Cooper has a top notch band with him including the stunning Nita Strauss who grinds, headbangs and fist pumps the crowd who are up and out of their seats as hits keeping coming.

Of course, there would be no Alice Cooper show without the theatrics and the legend makes sure there is plenty of those shenanigans. It’s pure cheese from start to finish but, hey, we’d all be screaming for our money back if Cooper ditched the pantomime theatrics. At nearly fifty years into his career and still banging out the classics like “Schools Out,” the shock rocker is as fun as ever and, as many of these fans here tonight will surely agree, long may he continue!

If you couldn’t make the gig, here’s some classic Alice Cooper performing “School’s Out”: