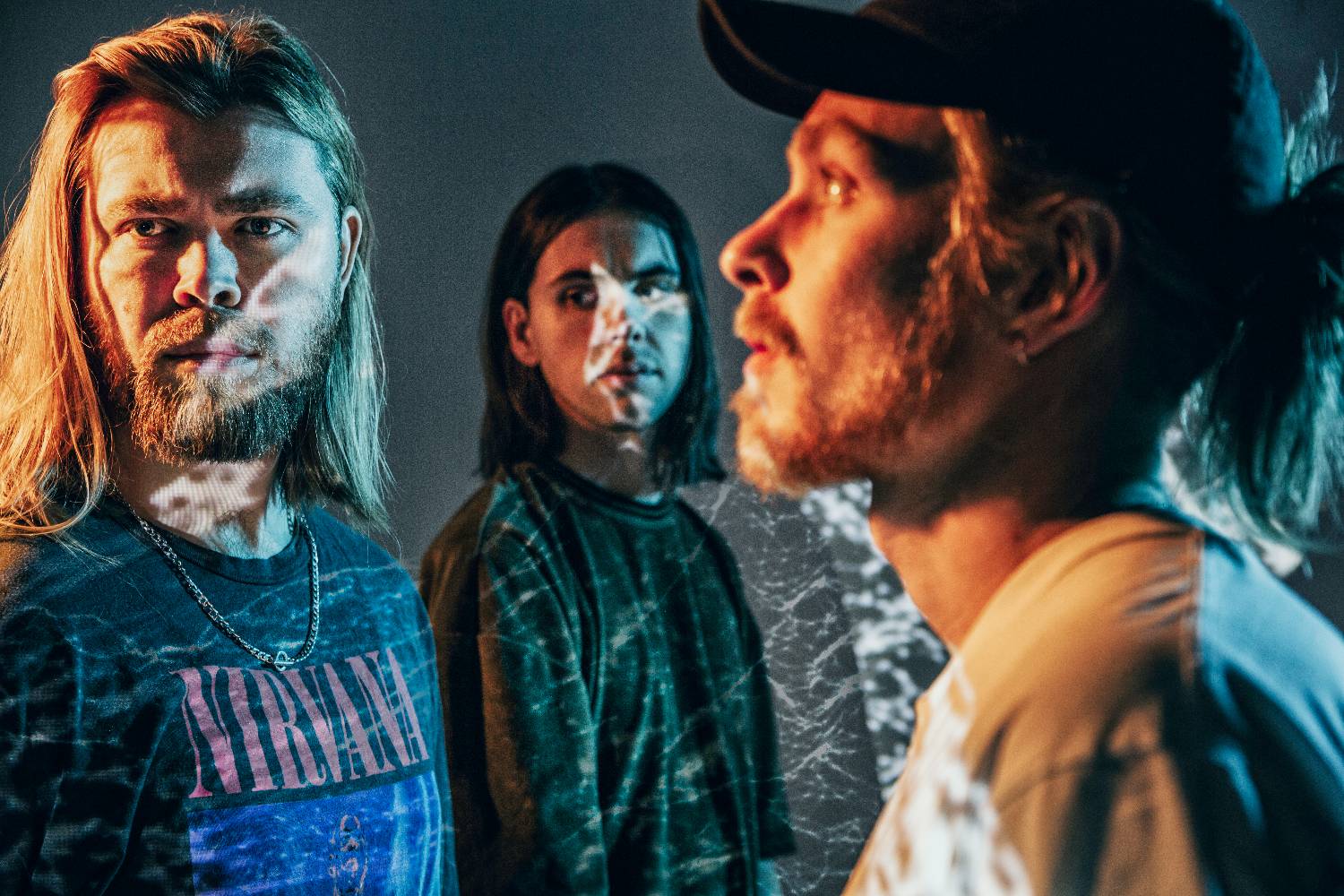 On September 20th, Scottish trio North Atlas will drop a new single called “South,” once again demonstrating their penchant for writing alternative rock with a refreshing, modern perspective. And, whether your believe us or not, this band of brothers combines their influences in an attempt to defy the traditional rock n’ roll sensibilities to a great result. For “South,” North Atlas received assistance from the award-winning rock producer Dan Weller and it’s certainly set to be their strongest release to date. (Pre-save the track now via Spotify.)

After a string of success from some of their previous singles and a quickly expanding live presence, the group—which consists of brothers Leon D. Hunter and Cam Hunter, and childhood friend Liam “Rusty” Russell—was added to the bill of a wide range of summer festivals, including France’s electronic Chateau Perche and a roaring headlining slot at Belladrum festival. Having all been raised in the Solway Firth, an area that forms part of the English, Scottish border, North Atlas is a band headed in the right direction.

We’re lucky to have the guys join us today for another edition of our new series Vinyl Variety. As a message from North Atlas themselves, the gents stated, “Hello, we’re Leon, Cam, and Rusty. We’re an alt-rock band from Scotland called North Atlas. We are loud, hairy and have perhaps watched Lord of the Rings one too many times. We love soundtracks, cinematic vibes and pretty much everything else from hip-hop to heavy metal, so with our knowledge of the Herculean, the Rebellious and the Brütal, we are going to give you a rundown of our city, Glasgow’s top five record stores (sort of).”

Watch the beautiful music video for “Another Ocean,” released in 2017:

– If you live in Glasgow, you think records, you think Love Music straight away. It’s slap bang in the city centre, literally the first thing you see when you get off the train as a music fan arriving in the city. The best thing about Love Music is it’s strong Scottish indie music section, right at the front door. This tells you a lot about the Glasgow music scene, it prizes it’s own like a proud parent. We stumbled across many of our friends’ records here, Gidd Gamz, Man of Moon and Foreignfox to name a few.

The store stocks a healthy supply from the legendary Lost Map record label, based on the tiny Isle of Eigg in the Hebrides, such as Alabaster de Plume and Savage Mansion. What I’d love to see in Love Music is a stronger representation from heavy bands, but you can’t win it all.

– A damn cool shop. You feel cool even just knowing it exists. Monorail Music is attached to Mono Cafe Bar, a music venue which hosts mainly punk or singer-songwriter gigs in Trongate in the East End. The performances take place on stage right next to the bar’s own beer fermentation vessels. They sure make use of the space! Monorail has a solid indie and electronica section and decent soundtracks. We clocked the original Blade Runner album by Vangelis, an absolute favourite of ours.

Honourable mention to the ‘73 Wickerman soundtrack. The movie was filmed in Kirkcudbrightshire where we grew up so has quite a legacy down there. There’s a more tantalizing heavy metal section here with a small thrash and black metal selection peeking through boxes of art-school tunes. Always nice to see an original The Breeders pressing crop up, Last Splash was produced by Mark Freegard, who we worked with on early releases.

Come along for the ride: check out the gents in North Atlas perusing Scotland’s top record shops: 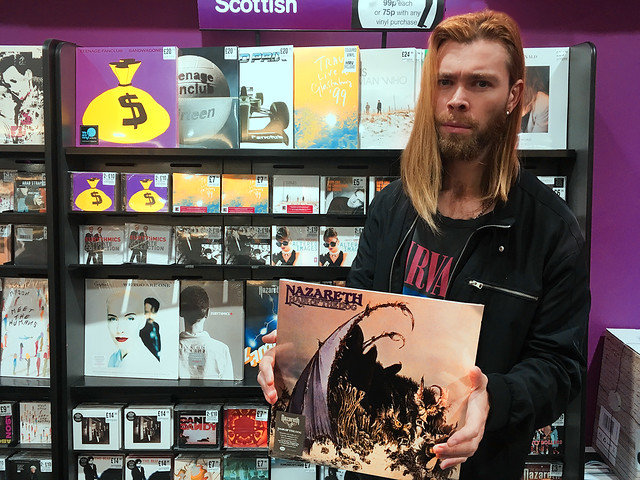 – Call us basic? Think again. The most mainstream store in town (for those who may not know HMV, it’s basically the UK equivalent to Tower Records), actually has the strongest heavy metal section and a healthy dose of organic, homegrown Scottish talent. Who’d have thought it. The entire bottom floor of HMV on Argyll Street is a dedicated, bonafide record store. Although first, you must wade through the superhero posters and pop culture merchandise (I counted five different variants of ‘Morty’ (from Rick and Morty) doll) when eventually, you reach the basement stairs, lined with posters for local shows, and to me it feels pretty authentic.

In the Scottish section, we find a whole wall of legendary and new albums, including everything from Dunfermline’s premier hard rock export Nazareth(!!!) to Young Fathers and a host of Rock Action records’ releases. Sacred Paws, Twilight Sad and of course plenty of Mogwai. We spied a couple here from Music for Nations, one of our favourite labels. Black Futures’ debut album, Never Not Nothing, is well worth a peep.

– This one’s different altogether. Part High Street Charity shop, part legit record store, Oxfam music feels more like a rummage through your dad’s records box. Lots of kitsch from the ‘60s and ‘70s, but when the occasional gem crops up, it makes it all worthwhile, not to mention the proceeds of the shop going towards an excellent cause. It’s located on Byres Road in Glasgow’s leafy West End, so is frequented mostly by art school hipsters and young university students looking to expand their horizons (or find a novelty record for their pal’s birthday). All in all a nice vibe.

Listen to “Volcanoes,” one of the other recent highlights from North Atlas:

– Okay, so it’s not in Glasgow. But I couldn’t write a paragraph on Scottish record shops for an international site without giving a mention to my old hometown record store, could I? Sadly Barnstorm Records recently closed down for good, but I remember fondly the days of loping awkwardly into the store as a teenager (you had to enter through a pottery shop, shuffling past well-to-do folks looking for a new teapot). On entering you’d be confronted with all the music a pre-Spotify era teen could ever need. Classic rock/metal CDs and Vinyl and legendary concerts on VHS. I specifically remember myself and Leon as wee guys watching Guns N’ Roses at the Tokyo Dome over and over. That sort of stuff never leaves you.

The “South” single will be released on September 20th, 2019. Check out the artwork: 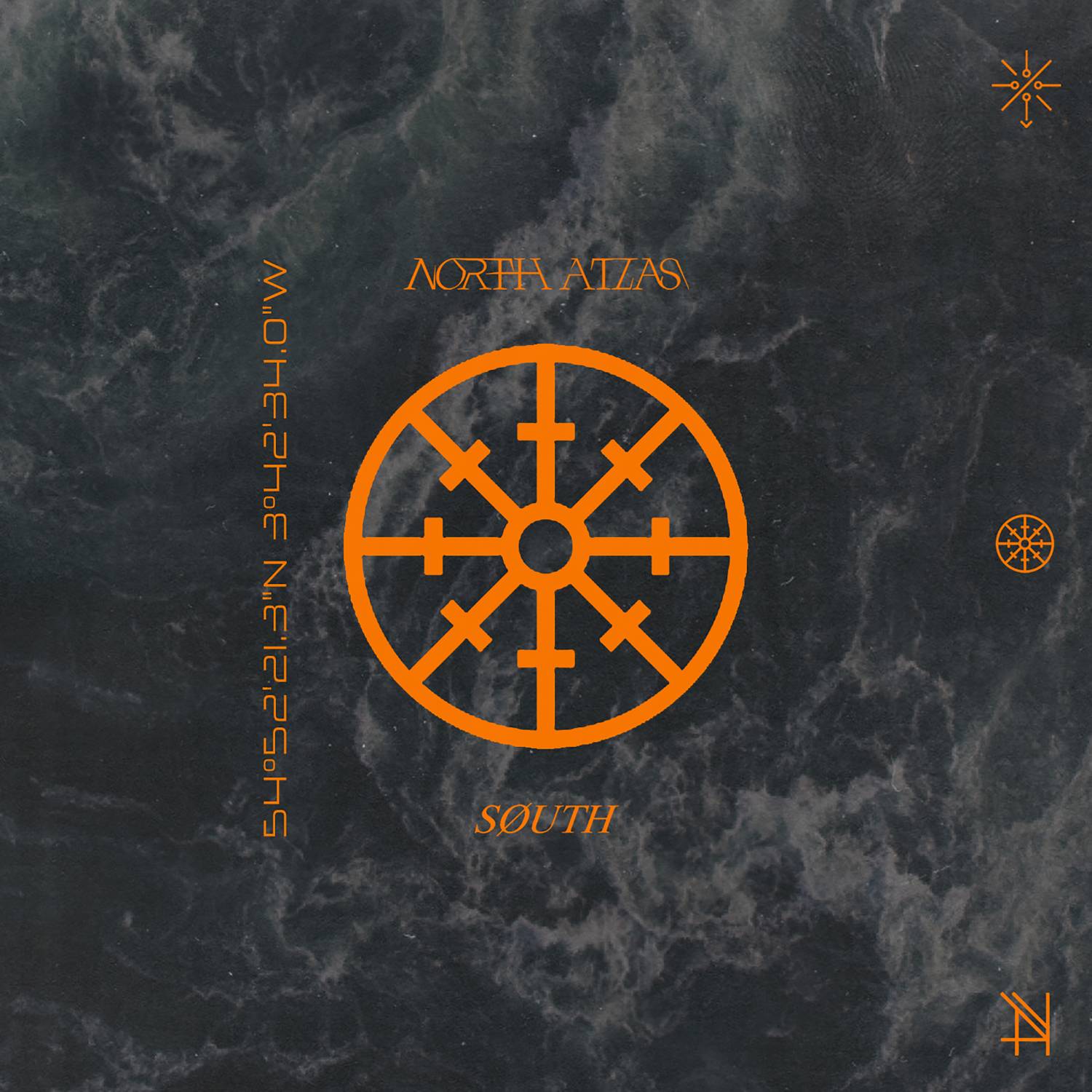