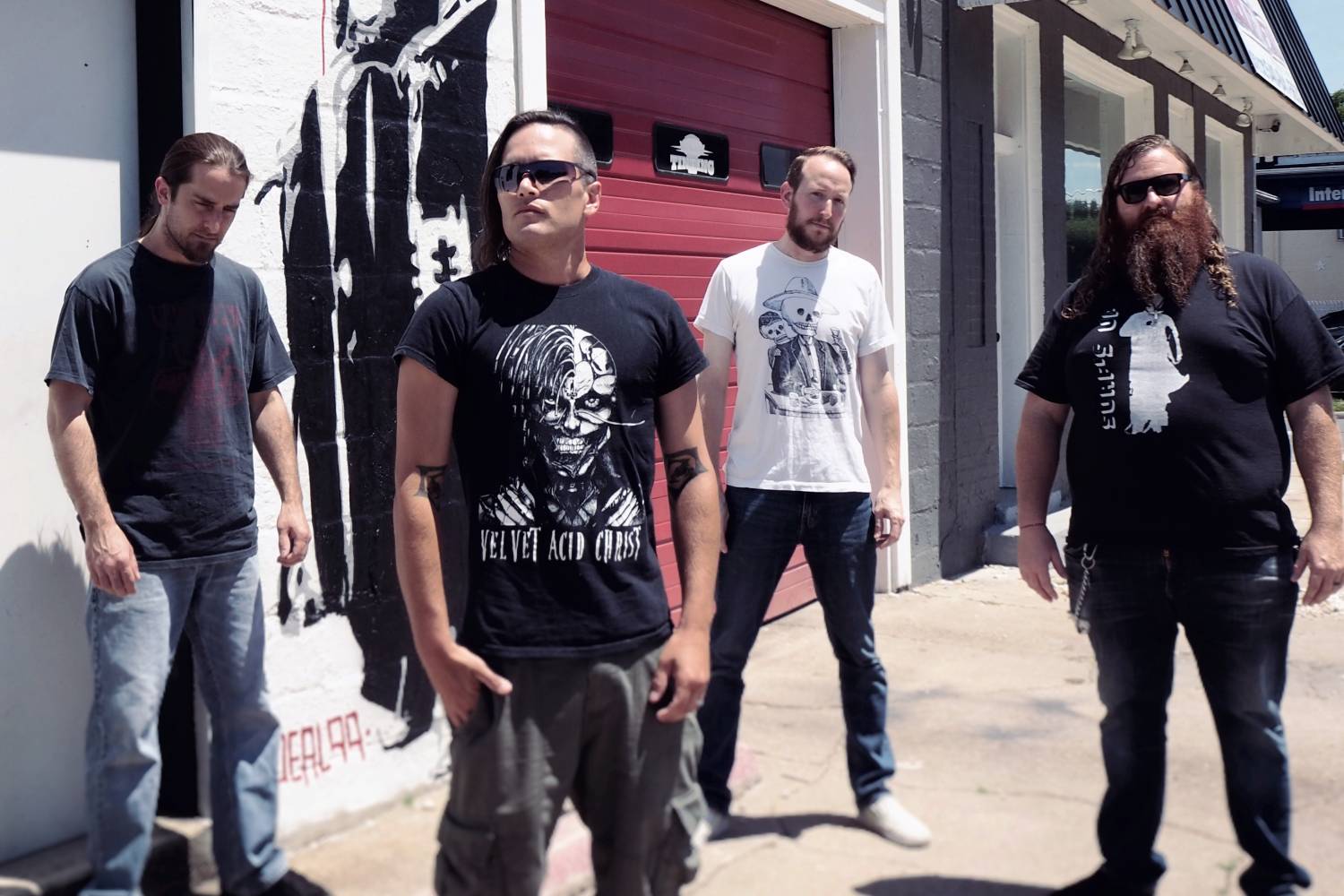 ‘The Secret’s Out!’ Virginian Post-Metallers ALLUVION Debut and Breakdown Their New Album [Premiere]

We are helping Virginian post-metallers Alluvion celebrate their 20 anniversary by premiering their hot-off-the-presses new album, The Secret’s Out, which drops on September 6th (pre-order now via Bandcamp). Over these last two decades, this group has come to be defined by their electrifying, energetic live shows and unrelenting work ethic, defined by their D.I.Y. approach to everything they do. Musically, Alluvion is so much more than just a “metal” band, with a sound and vibe that mixes elements of melodic post-metal, doom, psychedelic, and noise rock.

Having toured the East Coast repeatedly over the years, fans of other bands have become drawn to Alluvion by virtue of their aforementioned exciting live performances. After much anticipation, the group’s self-titled debut full-length record was released in 2014, followed two years later by the Reverberations EP. Armed with loads of new tunes, the interest in Alluvion only increased which in turn motivated the guys to quickly record a sophomore record, 2017’s well-received …Of the One Consciousness.

Composed of vocalist John Harmon III, guitatist Stephen Sullivan, bassist Brian Carnes, and drummer Andrew Murray, this is as solid and proficient of a four-piece as you will find. Along with our premiere of new album The Secret’s Out, the band’s members have provided an exclusive track-by-track review of each song of their new tracks, including details behind the writing and recording process.

The Secret’s Out so you may as well check out our exclusive premiere of the album now!:

01. “Preemptive Ascension”
Harmon: This track was created after the rest of the album. We always have a lot of fun playing with samples, whether at the beginning of an album, during a song, or even as an intro, or segue between songs when we perform live. In this case, we were trying to come up with something to use as an intro when we hit the road to promote the album. We really liked the repetitive snippet that was taken from “Weightlessness” that says, “You will fly away… souls all fly away,” and as we played with layering things over it more and more it really grew into its own thing.

Carnes: We had an opener for our shows that we started using that has the group vocals from the song “Weightlessness,” and we thought that’d be great for the album opener too! So I took that one night and added some radio static, random effects and a drum breakdown from the album rehearsals. And to tie it into “The Purity” which is the first song I used the guitar FX track from that song and tried to fade it all into each other until it gets super loud!

02. “The Purity”
Harmon: This song talks about living a life free of emulation and the power that comes from being yourself.

Sullivan: This song was one of the last that we wrote for the record. My original idea was to have that delayed guitar part over the entire track but that idea didn’t make the final mix. I do love how it turned out though. It was a great way to start the record!

Murray: When an album opener comes along, you just know it. The arrangement came together really easily. Starting with the music parts; a simple solid rhythm foundation and a driving down-tuned riff. Steve brought in the idea for a sustained group vocal then it was off to the races for John. He proceeds to lay down the most appropriate lyrics and vocal cadence for the verses, and chorus. Topped off with a signature stamp of harmonies. This song is right to the point and translates well live, to be enjoyed bu metalheads and rockers alike.

Check out some more “classic” Alluvion with the lyric video for “Incubate and Wait:”

03. “By Design”
Harmon: This one embodies the realization that a certain person, or situation that you’ve been with or into for a pretty long while now isn’t good for you or for themselves. It’s kinda like the “Oh shit… I’ve gotta get the hell out of here” moment and the subsequent fallout.

Sullivan: This one was my baby. I wrote it on an acoustic a few years ago and when I brought it to the band and it just morphed into something really special. Lyrically my interpretation is, it’s that feeling when you are completely separated from something that once was, then realizing that that very thing is what you need reconciliation to. That whole ending turned out phenomenal. I really love this track.

Murray: Originally the song was conceived by Steve along with other musicians our area. Now composed by the band, this is a track that holds a lot of weight on the album. A bit of a departure from the more ripping metal. This song took on a life of its own. Letting it breathe and develop naturally it ended up being a true Alluvion number.

04. “Husk”
Harmon: “Husk” is a two-part call-to-action. The first being a rallying cry to really take a good look at the people around you and compartmentalize them. “Do you know who you can really trust when everything falls apart? Do you know your true friends from your fair-weather friends?” The second part is an internal investigation. “What kind of person am I when shit hits the fan?”

Murray: “Husk” is the first single from the new album. Tied to it, a B-side entitled “Bricks & Mortar” available on Bandcamp etc… “Husk” is another song that just gelled instantly. It’s a rocking metal riff extravaganza. Up-tempo and driven bass; enough cannot be said about the vocals here.

The Secret’s Out will be released on September 6th. View the album artwork now: 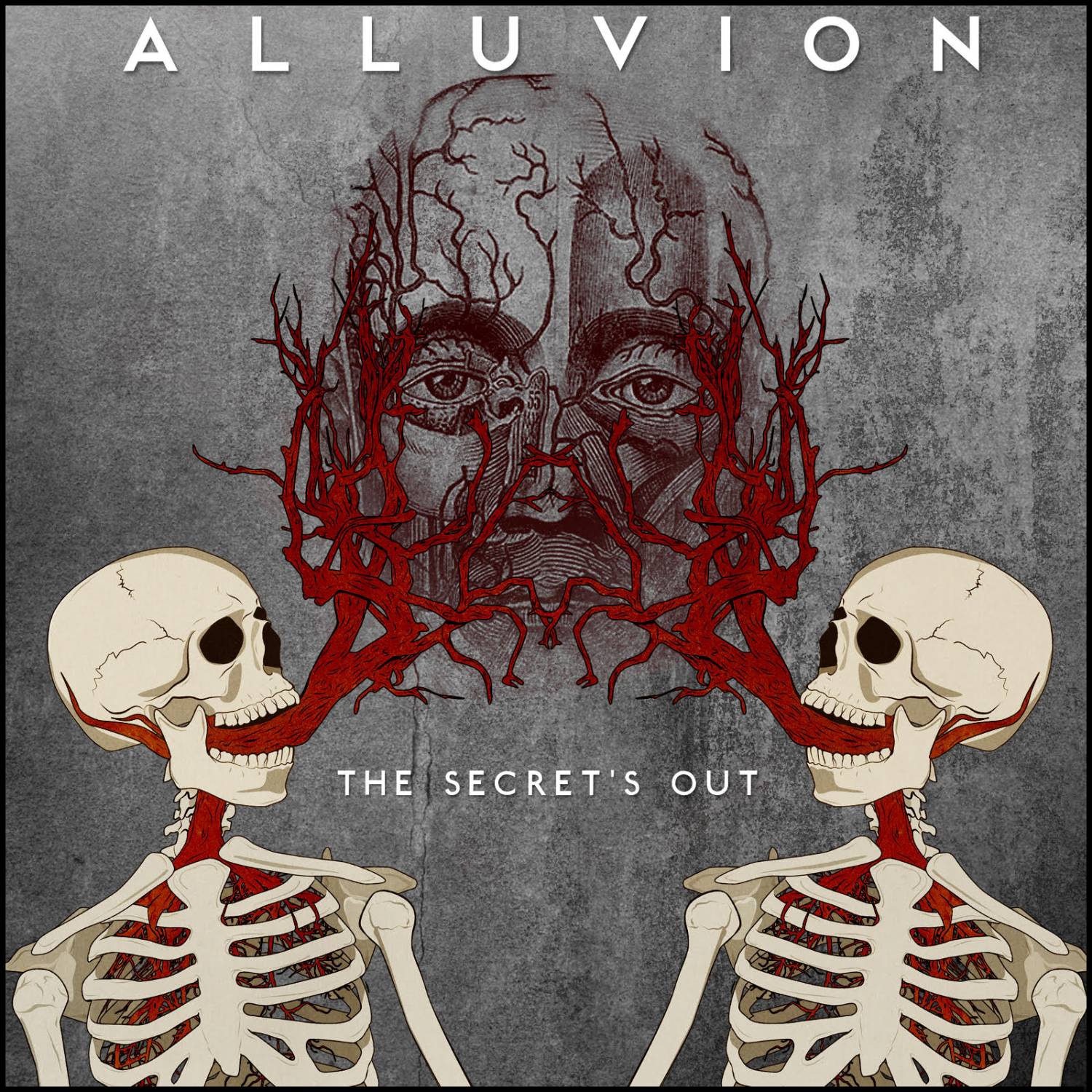 05. “D.I.Y.”
Harmon: “Do It Yourself.” To me, this is like our personal “Army Of Me” by Bjork. Just don’t be that guy… the one who has 20 excuses why he hasn’t done anything productive this week. Everything is everyone else’s fault and they’re powerless to stand up and better their situation.

Sullivan: The was the first song that we wrote for the album. One of the more rock tunes.

Murray: Inspiration for “D.I.Y.” came from the desire to get results without relying on the uncertainty of others. It was written as a reminder to reflect on ourselves. To improve on what we have, offer what we can, and how can we take it to new heights? Some examples would be running our own lights and effects at the live show. Steve designing and printing our shirts and other merch, as well as booking and other things. Brian being able to do amazing recordings at our own convenience.

Sullivan: My favorite track on the album. I love the three-part harmonies on the vocals and the chord changes are really weird and almost ethereal. Good stuff!

Murray: Started as a demo sent to the rest of the band by Steve playing the acoustic riff that you can hear throughout the song. What’s interesting about this song is that the drums were actually the last thing to be put together. Some time had elapsed before it was all arranged and the ideas kept coming; giving it an interesting dynamic with elements of what each member of the band can bring. This track really stands out on the record.

Off of ​.​.​Of the One Consciousness, watch the official music video for “Fight Real Fires:”

07. “Teeth”
Harmon: “Teeth” is saying to call people on their bullshit… yourself included.

Carnes: I had the main bass riff for the opening of the song and the verses. And showed it to Stephen and said it needs a chorus and perhaps a bridge or middle section and he added perfect riffs to tie it together. The song was SUPER slow at first, kind of doomy and more stoner rock-ish, but the middle section was wanting to sound way faster so we had to meet in the middle for the tempo. I had the word teeth in my head when I was writing those riffs so we used that for the working title and John took that and ran with it for lyrics.

Sullivan: This one was definitely Brian’s baby. I LOVE it! It’s probably the heaviest song on the album. One of my favourites for sure!

08. “Mayday”
Harmon: “Mayday” is about losing control. That could be losing out to fear, anxiety, or depression among other things. Having personally dealt with these subjects as well as a battle with addiction in the past, I wrote from experience about how you can’t really see the problem when you’re in it. It’s only when you can take a step back and bring everything into the frame, that you notice all of the self-destructive behavior and the downward spiral.

Murray: The second single from the new album. It was the first that was written for it. Back when we were still getting in the swing of writing sessions again. “Mayday” is a collective work by the band with atmospheric vocals and more experimentation.

Don’t go before you check out “Protect . Shelter.”

09. “The Secret’s Out”
Harmon: To me “The Secret’s Out” is an unapologetic glimpse at what it looks like to take the advice of “The Purity.” To live your life as an original. To know right from wrong and to be yourself. To truly be comfortable in your skin enough to not worry about, or be shaken by the opinion of anyone else.

Sullivan: This track was a perfect way to end the record. It’s one of our bigger songs as far as arrangement goes. The ending is really special.

Carnes: This song literally just fell into our lap at the last second. The more we rehearsed it the crazier it got! When we recorded it, it got just a little bit more crazy, and when we decided where it was going on the album is when it really grew hair. I remember sitting down one morning and really messing with vocal FX, adding whispers, crowd noises, and FX to try to simulate a sort of third world market place because the riffs and the song have this underlining middle eastern feel to it. And I mixed the vocals in the middle section to sit on top of the song as if it’s in somebody’s head before it all comes crashing back to reality to the chorus!

Murray: This is an appropriate song to be the title track. It all culminates here into massive sensory overload. Chaotic and beautiful. We got the perfect production from Stickman Studios. Brian, John, Steve, and myself are extremely proud of this record and excited to share it. Thanks to everyone.