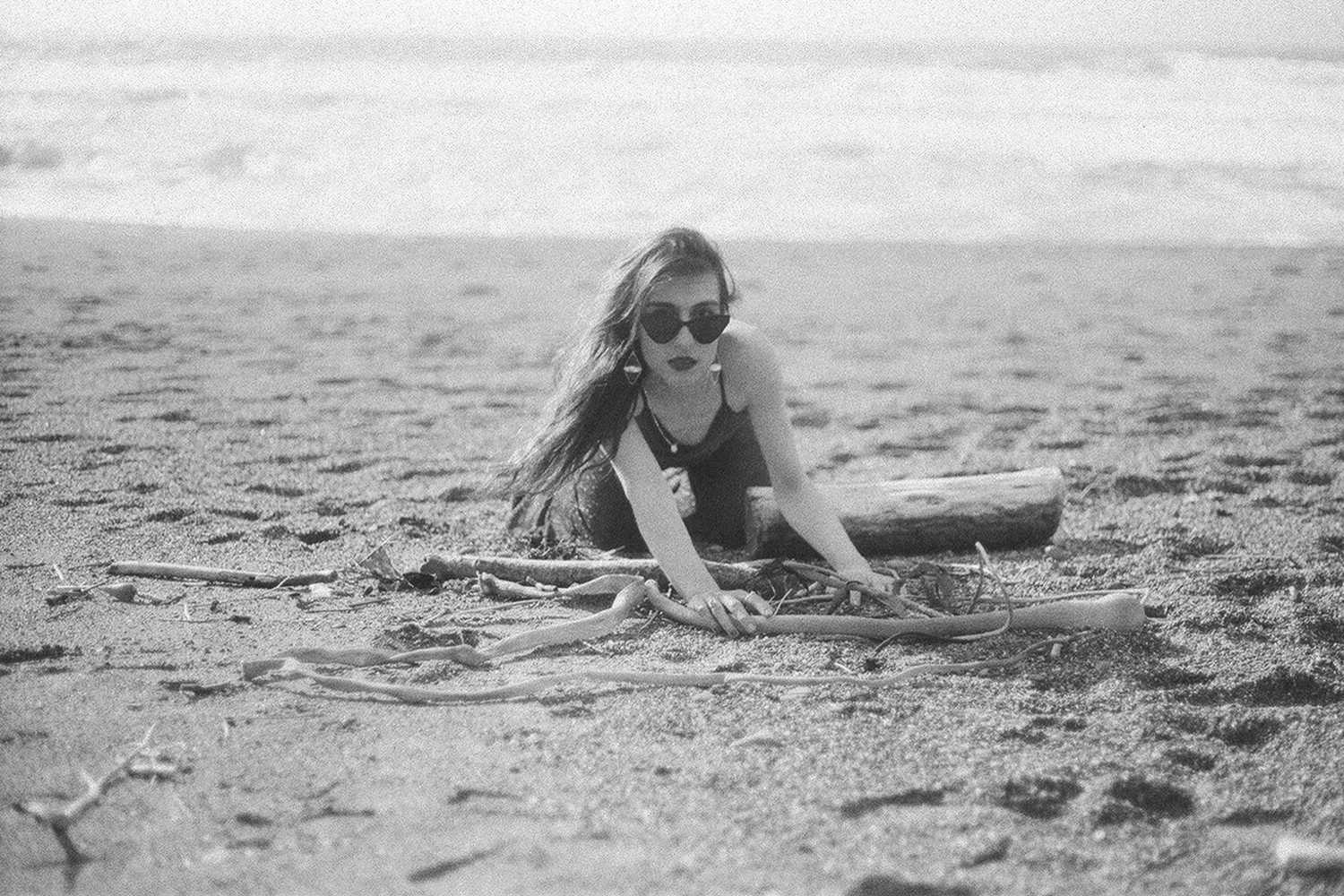 Beware of The Bedroom Witch; the artist lurking behind our latest exclusive premiere for the single “Capricorn.” The tune is lifted from the artist’s new album Diaspora which is due on October 15th via Psychic Eye Records (pre-order it now at Bandcamp). Diaspora is the fifth full-length offering from The Bedroom Witch, a dark pop project from the mind and talent of recording and performance artist Sepehr Mashiahof.

Mashiahof recently toured the U.S. East Coast with the multimedia artist Wizard Apprentice and she became known for her participation as a featured act in the Bay Area’s Multiverse is Illuminated Black & Brown Punk Festival, plus the inaugural Transgress Fest in Santa Ana. The new album Diaspora is special for Mashiahof, as it acts as an investigation into her life growing up as an Iranian-American trans woman. Incredibly powerful, it’s an experience in music of overcoming the core struggles of her life as a first-generation immigrant and the various trials, tribulations, feelings of alienation and landmark moments along the way.

With its diverse soundscapes and subject matter, Diaspora was a long time in the making for The Bedroom Witch. She went through a lengthy period of considering what her music meant at a higher level and whether it was meant to be an avenue for healing. She kept coming to the realization that there was another part of herself which she had abandoned through the diaspora. This led to the conclusion that her next piece of music must act as a story that speaks to the immigrant experience of being dispersed from one’s homeland.

Time to hear what all the hype is about. Listen to “Capricorn,” now!

Musically, Diaspora is loaded with ‘80s-like synths mixed with longing that can be heard through the vocal harmonies. Songs such as “Nowhere” represent Mashiahof’s lost relationship with her home country of Iran. A large influence on Mashiahof when she was growing up was the large presence of Persian folk music in her life, which shines through on the record, with its nostalgic compositions layered within avant-garde, symphonic style, electronic music. You may liken the sound of Diaspora to a DJ at a Persian wedding where all he/she does is play Depeche Mode and in turn, the guests dance like Kate Bush.

Being such a complex and multi-faceted musician, it can be difficult to sum up just what The Bedroom Witch is all about and just what Mashiahof is getting at with Diaspora. That’s why we felt it necessary to speak to The Bedroom Witch herself; to be enlightened more directly about this musical movement, the new song “Capricorn,” and the true musical magnificence of Diaspora.

I really like your name The Bedroom Witch. It somehow just works really well as a moniker for what your music is all about. Tell us briefly about the origins of the Bedroom Witch name.

The Bedroom Witch: “I came up with The Bedroom Witch as a moniker after a long tangent I went on to describe my frustrations about making music and art with not enough space or resources to a friend one night years ago on a random street corner in LA. Somewhere in my rant, I referenced my feelings around creativity as being a witch stuck in a bedroom and it clicked. At the time, I was writing a seven-act video story called ‘The Alter Shegos’ (or ‘The Altar She Goes’) and ended up naming the lead character The Bedroom Witch because of that conversation. The soundtrack I recorded for the video piece didn’t end up making the cut so I just released the collection of songs as a separate body of work under this name. ‘Bedroom Witch’ just felt elusive but playful, kind of like my energy.”

Her most popular video on YouTube, this is “IRREMEDIABLE”:

Take us through the origins, writing, and recording of our featured track today “Capricorn.” What’s the story behind this song?

The Bedroom Witch: “If Diaspora was to be understood as a movie or a book, ‘Capricorn’ is meant to be the climax of the story. It’s capturing the moment when The Bedroom Witch is reunited with her runaway Shadow Self in the homeland, ‘Nowhere,’ narrated through the perspective of the latter. The Shadow Self, the moon sign, the Capricorn, she’s all about confronting unspoken desires and suppressed needs that block some kind of inner fulfillment. She’s the one who took the initiative to embark on a search for ‘Nowhere’ and escape ‘Exile’ where both she and The Bedroom Witch were initially stranded in. So what’s the takeaway? The Shadow Self reminds the Bedroom Witch that as much as she needed her shadow to feel whole in ‘Exile,’ she, herself, wouldn’t even exist without her. It’s the ‘neither of us are whole without the other’ moral in a story. ‘Capricorn’ is the part of the album where you’re supposed to cry after forming some kind of resolve about being a person.”

Now Diaspora is your fifth record and it is in many ways a look at your origins and the inevitable struggle of growing up in America as a first-generation immigrant woman. Why did you decide to delve deeply into this issue as the backbone of this new album?

The Bedroom Witch: “Because it’s been eating at me for a really long time. I would re-listen to all of my old albums and be reminded of this inner agony about ‘what is home’ that had been seeping out through my subconscious within a lot of the lyrics. There has been this long, imposing question of ‘what are we doing here’ that’s plagued most of my upbringing and I needed to create a world where I could confront that sense of alienation. My parents romanticized the idea of ‘returning home’ so frequently and so cyclically but to no avail. Iran was kind of painted to be this mystical world told fondly through a selective memory bank my parents could convey of growing up there.

If you strip it apart though, they’ve idealized a specific time before the 1979 Revolution. The reality is that we left for a reason. Another reality is that being here is no better. After a while, the feeling of being from ‘nowhere’ makes you feel an isolation that you can’t return from. I developed this sense of resentment in my personal ‘exile’ that started to interrupt my day-to-day with anxiety for the future and a weird, dormant grief for the past. Diaspora worked for me to take the narrative into my own hands and remind myself that the imagination is a powerful tool to push beyond my internalized feelings of ‘never belonging anywhere.’”

Check out the cover artwork that will accompany The Bedroom Witch’s new album Diaspora: 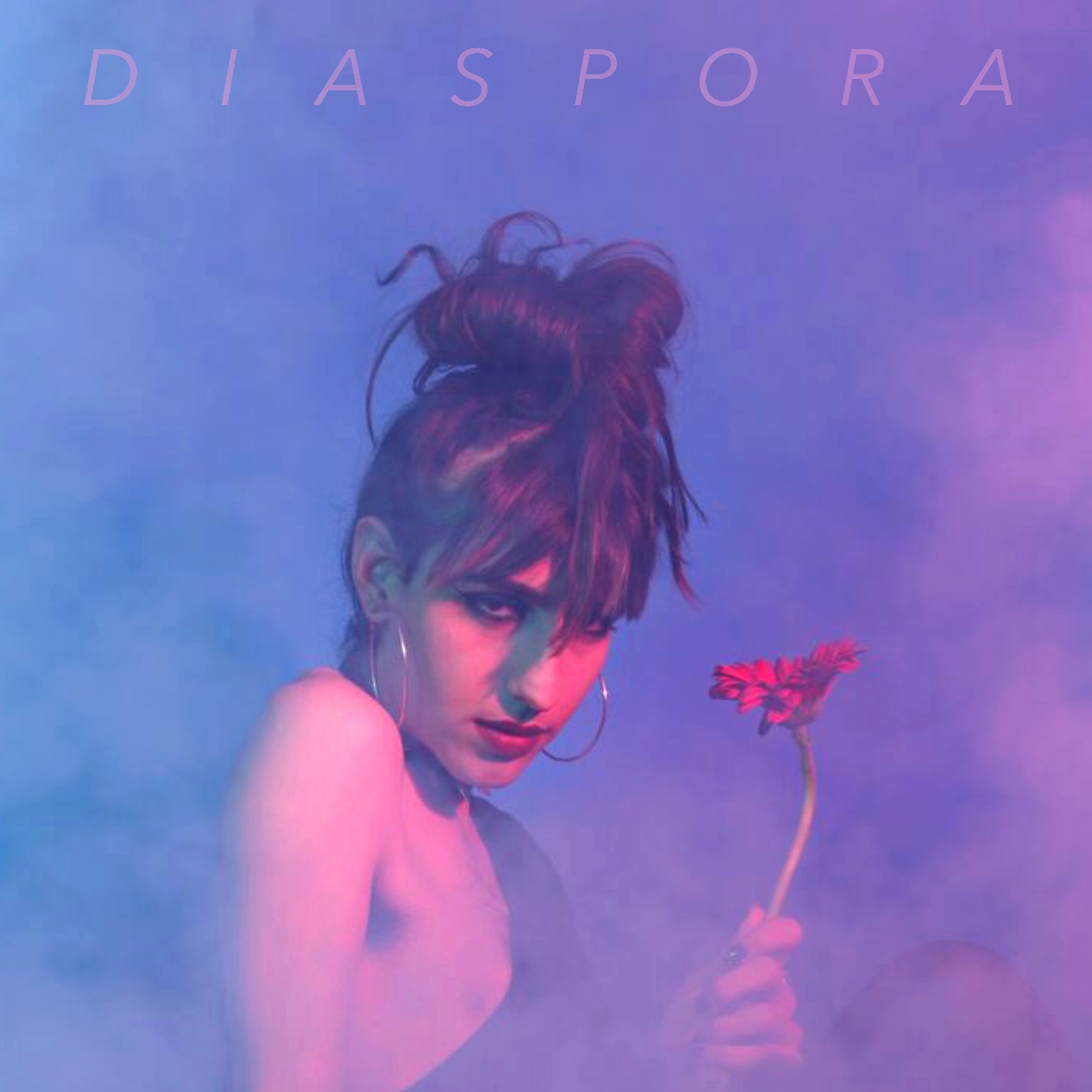 Living in the environment of the United States and Los Angeles as a young immigrant woman would obviously have its trials and tribulations along the way. Tell us one of the primary lessons you’ve learned from your life experiences thus far?

The Bedroom Witch: “My parents definitely faced the brunt of the challenges of immigration more that I did. We came to the U.S. when I was two years old. It was easy to assimilate me. I was learning English at school and speaking Farsi at home and didn’t have an accent ‘exposing’ that I’m not actually from here. Since I was a child, though, I still felt responsible for my parents’ unhappiness, or own diasporic struggles, because they moved to the United States for us, me and my sister. They tore their lives apart to come here and give us a ‘better life’ and since then, it’s felt like we’ve had to do the American Dream thing, and we failed because we’re all set up to fail.

The myth that second-generation kids will grow up to be the image of success our parents’ project on to us puts an incredible pressure to assimilate into a palatable existence I just am not. It moves you away from the arts, to try to fulfill this expectation. I’ve learned to not dwell on what the idea of ‘home’ should have or would have looked like. Obsessing like this does nothing but lead to more crushed expectations and I’m actively working on being okay with knowing that I am always going to feel an overall layer of disappointment in my lifetime; as both a trans girl and as someone who will continue to mourn disconnection from my culture.”

With Diaspora now being your fifth record, you definitely have a lot of experience writing, recording and releasing new music. What is one thing that differentiates Diaspora from your previous albums?

The Bedroom Witch: “Diaspora was my first attempt at a full-length concept album with a cohesive storyline. Whether it’s obvious or not, each song from the album is meant to connect the dots and build from one another to tell this story about reconnecting with the homeland. I had been writing about these worlds that I’m describing in Diaspora in random notebooks and loose scraps of paper over time and decided that to challenge myself, I would see if they made sense packaged into pop songs.

There are different characters that are speaking in previous albums I’ve made but I never fully expanded on them. They were left nameless and fragmented. In Diaspora, character development was really important to me and, with the limited number of syllables that can come through in pop music, I tried to clearly illustrate who the characters interacting with The Bedroom Witch were as vividly as I could.”

Watch the music video for The Bedroom Witch’s Closure from the 2017 album Injury:

Tell us what your plans are for bringing Diaspora and your previously released albums to the public. What touring or concert plans do you have coming up?

The Bedroom Witch: “I’m hoping that Diaspora can be relatable for my generation (and generations to come) who are going through the immigrant experience. Although the fiction in the story is specific to me and these visions I’ve been seeing in my mind, the general themes attached to this album (isolation, loss of cultural identity, succumbing to inner desires…) are desperately trying to engage people on a broader scale. All of my albums have always been vehicles to connect more with people in a way that words are sometimes unable to do so. I can’t stand being misunderstood, so why not spend time collecting my thoughts into albums, release them, and let you figure it out from there?

That said, music and art are the only avenues I can let go of that fear of being misunderstood and that calms me down. Everyone has their own interpretation of the art they’re experiencing and that on its own creates breathing room. This album was also my first real attempt at going deeper into mixing my own music. I learned so much about frequencies from the couple of months I spent mixing Diaspora and noticed so many things I was doing ‘wrong’ in my recordings.

Let me clarify, though, there is no right or wrong way to record your own music but dissecting the sounds in this album did activate a more intentional approach to my own music production moving forward. So, when it comes to plans right now, the production element to music-making is at the forefront. As far as shows go, Diaspora will celebrate its release at Pro Arts Gallery in Oakland as part of an ‘anti-ICE benefit show’ with Mystic Priestess, Scissoring and Dé Vu on November 9th. I also want to take this project to Europe and do a tour there sometime in 2020.”