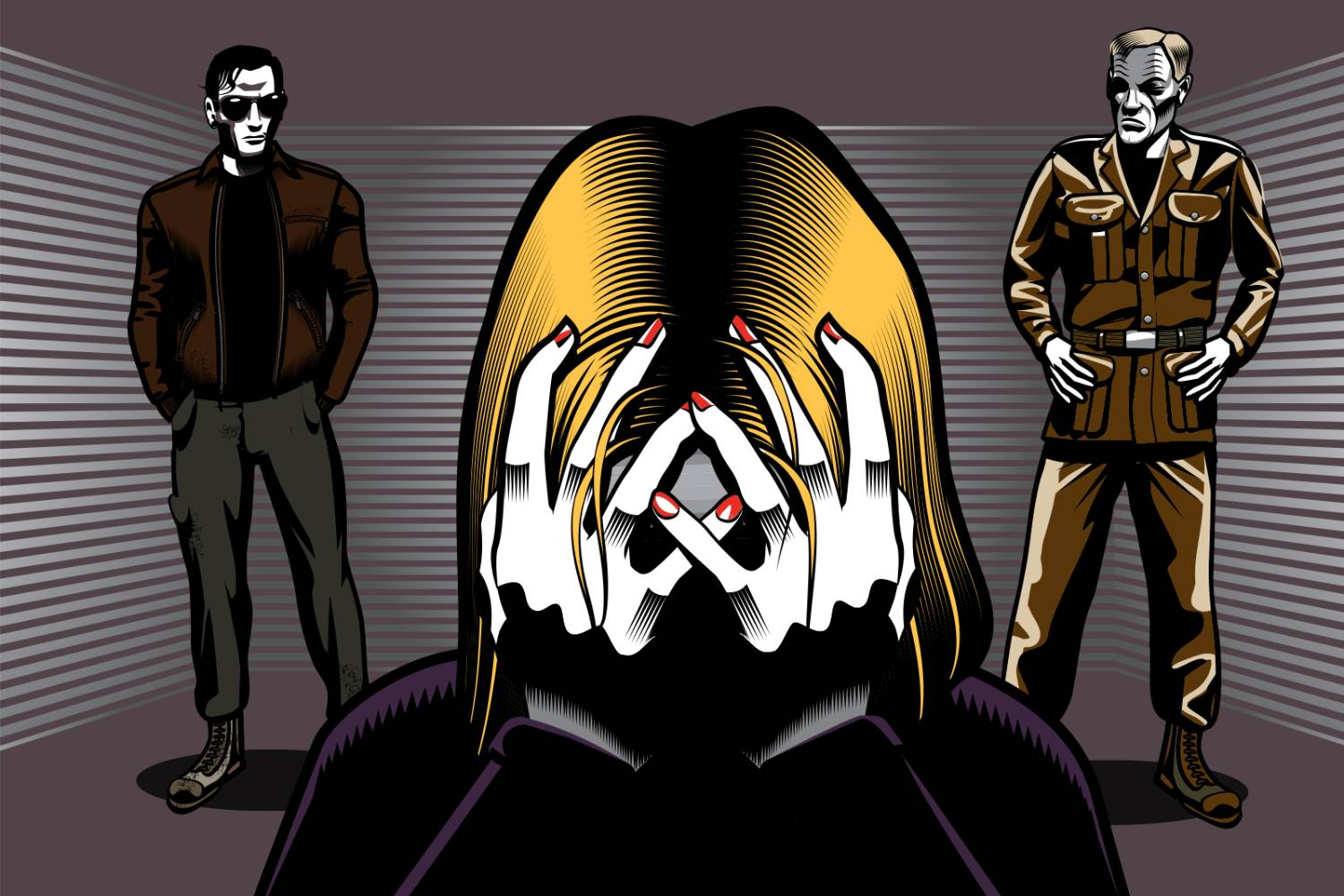 Nowhere Nation is a visionary rock band shrouded in mystery, international espionage and pulpy spy romance. They prefer to exist through their music and accompanying graphic art (created by Aidan Hughes) and, as such, are photographically incognito and without a defined home-base to speak of.

With three singles to their name – see the video’s below – Nowhere Nation’s first full length album, Omicron (available on Apple Music and Spotify, and as an interactive experience), dropped yesterday on September 18th. The release is a concept album taking listeners on a thrilling ride through the tangled moral web of modern-day espionage alongside a soundtrack of ‘80s-style pop-rock with glorious synths and melodies supporting the riveting story.

As if journeying through a love triangle between the head of a corrupt and clandestine government agency, his female assassin protegee, and a paranoid secret agent haunted by his own guilty conscience wasn’t enough, we have Nowhere Nation’s own Arthur Blume joining us for this high-intrigue Stereo Six to run down the albums that helped shape the Omicron experience:

01. Lorde – Pure Heroine (2013, Universal, Lava, Republic)
– This album was my soundtrack the entire time I was writing Omicron. At one point, mentally parodying the “my boss is a Jewish carpenter” bumper stickers, I thought “my boss is an 18-year-old from New Zealand.” Pure Heroine is one of the only albums I can listen to an unlimited number of times. I love the freshness of the arrangements and the sense of space they create.

My favorite track is “Buzzcut Season.” Sonically, it’s incredibly poignant. The lyrics remind me that there’s a lot of trouble in the world right now and modern media has a vested interest in amplifying the fear factor. I often hear about some faraway disaster and it makes me think of “cozy catastrophe” fiction, where the world is being destroyed, but it doesn’t much affect our heroes in their enclave. That makes these lines resonate: “Explosions on TV / and all the girls with heads inside a dream / so now we live beside the pool, where everything is good … Make believe it’s hyper-real / But I live in a hologram with you.”

02. U2 – Pop (1997, Island)
– U2 has been my favorite band the entire time I’ve been writing music. I could name other albums as inspiration – Achtung Baby for its underlying story arc, and Boy because I hear “Out Of Control” in the original Omicron demos – but Pop is the most direct.

For Omicron’s title track I wanted nonstop urgency since the main character is running for his life from day into night, and sonically I was motivated by U2’s “Do You Feel Loved,” which never stops going once it kicks in. In “Don’t Ask This of Me” and other songs, two characters wrangle with an employer who’s too deeply woven into their lives, which reminds me of U2’s “Gone”: “You wanted to get somewhere so badly / you had to lose yourself along the way / Are you still holding on? / I’m not coming down.” “Interlude” is Omicron’s sonic and emotional low point. When I think of spooky emotional landscapes, I invariably think of “If You Wear That Velvet Dress” from Pop. (Portishead’s “Sour Times” is another favorite.)

Have a gander at the slick cover artwork for the six albums Nowhere Nation outlined: 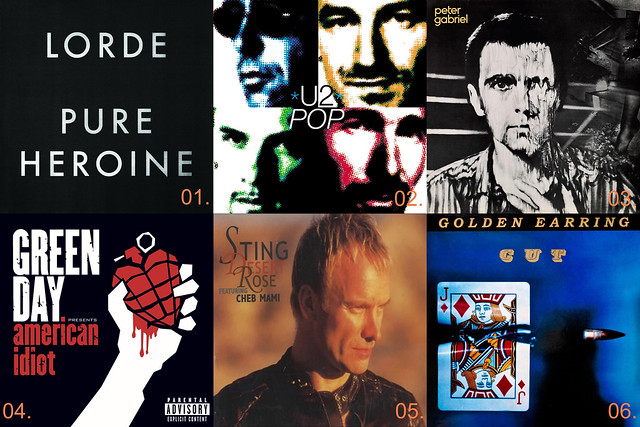 03. Peter Gabriel – Peter Gabriel III (Melt) (1980, Charisma, Geffen, Mercury)
– One of the first albums I ever owned. I didn’t realize until after finishing Omicron what an influence early Peter Gabriel had been: vocal style, political lyrics, characterizations, eclectic instrumentation, sonic energy. Melt is a direct inspiration for both Omicron and its sequel, which is already written.

The events of Omicron are orchestrated by the leader of a clandestine agency who is a gleeful lunatic – you could imagine that it’s him yodelling at the beginning of Melt’s “I Don’t Remember.” He welcomes his protegé as “royalty” and gloats about spycraft: “This game we love, so sad you’ll never know / You are untouched by our madness, so you’re unfit for our show.” Which reminds me of “Games Without Frontiers,” an allegory of geopolitical conflict in a Lord of the Flies setting.

Another of Omicron’s characters is an assassin, into whose mind we get a prolonged and sympathetic look, and for me this evokes Gabriel’s one-song rock opera “Family Snapshot.”

04. Green Day – American Idiot (2004, Reprise)
– Between music school and writing Omicron, I piled up demos of political and love songs, but could never figure out how to assemble them into a coherent album. One day I woke up on a cross-country flight and realized that the solution was to write a concept album. I had very little experience with concept albums, but this proved to be the insight that unlocked everything.

American Idiot is exactly as much of a concept album as I intended Omicron to be, which is to say: the lyrics aren’t a screenplay, but it has identifiable characters and a story arc you can clearly sense if not precisely read. American Idiot is a reaction to the George W. Bush presidency, which was an overreaction to 9/11, and Omicron is the same — it’s a story of America as an unhinged giant beginning to lose its way. We recorded vocals for Omicron at Resonate Music in Burbank, a building I wish I could live in, and when we first walked into the control room they said, “This is the board American Idiot was mixed on.”

Omicron’s great spymaster can basically “See Inside Your Mind.”

05. Sting – Desert Rose Single (1999, A&M)
– From this release, the Vic Calderone melodic club/radio edit remix was a sonic inspiration for Omicron and turned out to be a thematic match as well. Around the time I was realizing that a concept could help me make a pile of songs into an album, I was playing with a new combination of drum loops and surf guitar, and this led to songs that felt like real departures; ones alluding to revolution and romance in a desert setting. One of them became “Omicron.” For another, I took an older song about servants who fall in love and plot an escape from their master, connected it into the emerging plot of Omicron, and – taking inspiration from “Desert Rose” – gave the demo a higher level of energy and an EDM feel. That song became “Seven Veils.”

I wanted to pay respect to the music behind Sting’s track, so I started by reading about his co-singer Cheb Mami and listening to his other work, including “Sidi Boumediene”, which feels to me like a direct ancestor of “Desert Rose.” I was inspired to learn that raï music is from Algeria (matching Omicron’s North African setting) and it means “opinion,” it’s passionate and sometimes controversial, and it can involve a combination of politics and romance. I also learned that Oran, raï’s hometown, in the 1960’s was the site of an anti-independence bombing campaign that sounds like exactly the sort of mess Omicron’s post-9/11 operatives would be implicated in. So I came to feel like the musical tradition Cheb Mami brought to “Desert Rose” helped inspire the whole album.

Omicron is out now, so jump in. 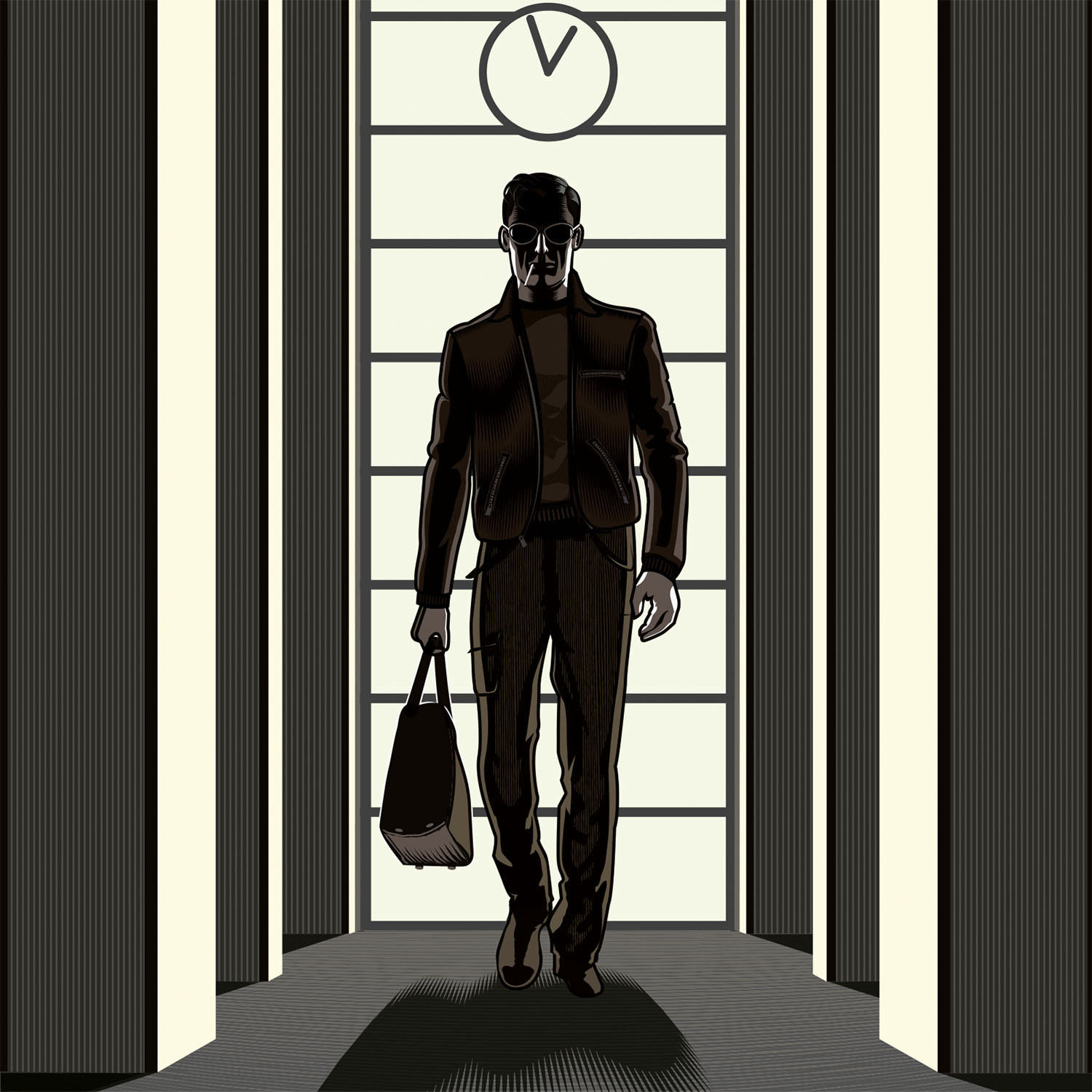 06. Golden Earring – Cut (1982, Capitol, 21/Polygram, Mercury)
– I can’t talk about Omicron and its title track without paying homage to the 1982 hit “Twilight Zone” from Cut. Golden Earring’s guitarist George Kooymans wrote this song after reading The Bourne Identity, in which a covert US government operative wakes up unable to remember who he is or what he’s done, and spends the entire story reconstructing his past.

I had decided at the beginning of writing Omicron that I wanted a scene in which one of the characters wakes up confused in a dark hotel room – drugged? crippled with remorse? burned out to the point of being unable to distinguish cities and days? – and spends the whole day and night evading pursuers until he reaches the safe harbor of the morally questionable organization he’s fallen into. As I polished the song, I pushed the chorus to be higher and more desperate, and I’m pretty sure “Twilight Zone” was on my mind the whole time; its protagonist in a lonely hotel room, the gun still warm, the double-crossed messenger, and his guilty mind – where is he to go now that he’s gone too far? I loved the result, and in Omicron’s final track I had my character pay homage: “Our dads loved Bond and Jason Bourne.” And at least to me, this track sounds incredibly fresh and insistent for something recorded in 1982. It just doesn’t stop.