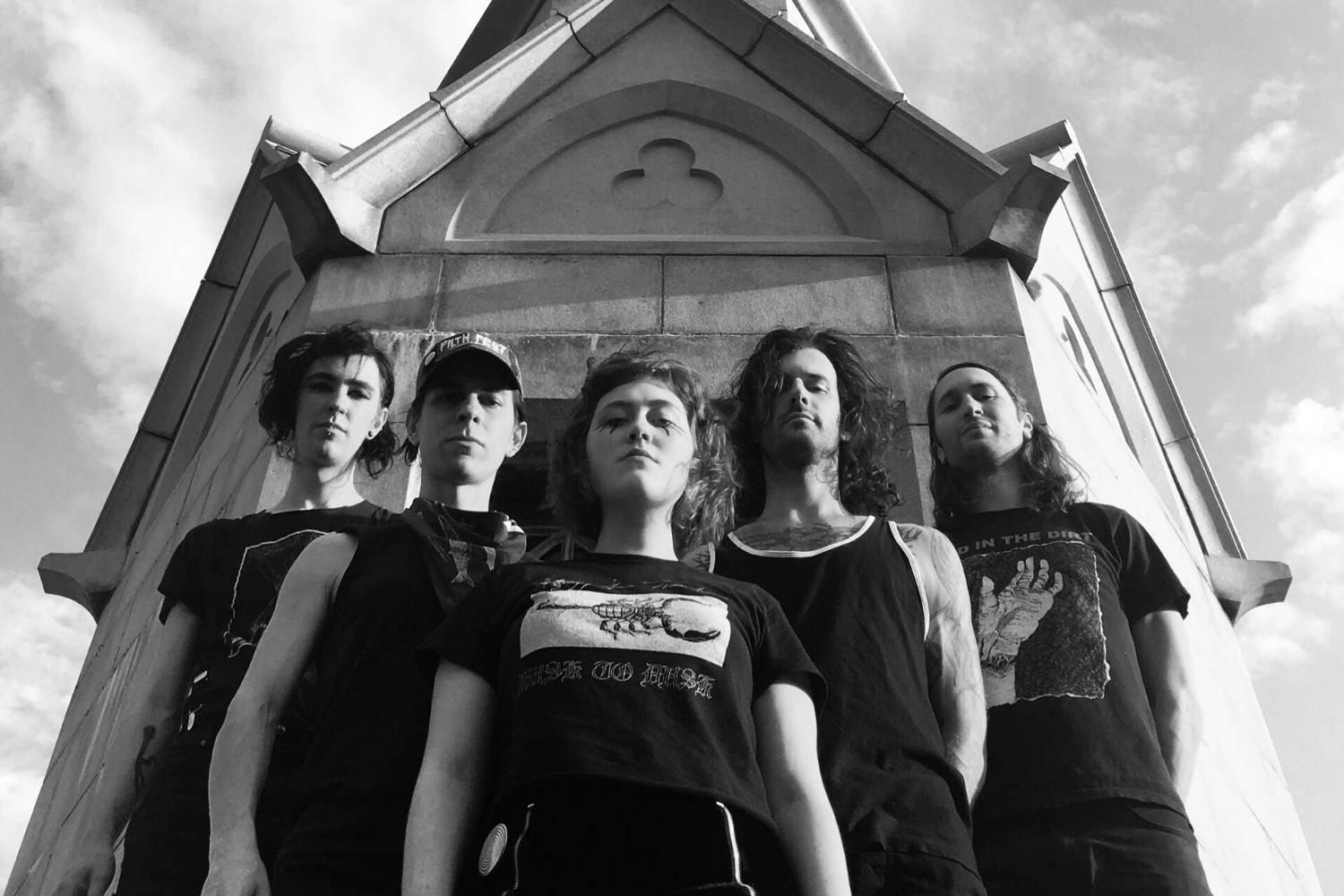 Asheville, North Carolina’s Secret Shame is a post-punk/darkwave band which just released its debut full-length album, Dark Synthetics, on September 6th, 2019. Recorded and mixed at Richmond, VA’s The Ward by Ricky Olson with mastering by Stereo Image’s Bryan Walthall, Dark Synthetics dropped via Portrayal of Guilt Records, digital, CD and tape copies can be found via Bandcamp, Spotify, and other providers here.

Born out of an absolute compulsion to create art—lead singer Lena notes “If I couldn’t sing or play music, I would tear my skin off”—the band, which is rounded out by lead guitarist Ryynikki, bassist Matthew, drummer Nathan, and rhythm guitarist Billie, Secret Shame was born in 2016 and worked quickly to release their two-track Basement demo, followed by July 2017’s Self-Titled EP.

With high praise in from revered outlets the likes of The New York Times, Paste Magazine, and BrooklynVegan among others, word is quickly spreading about this quintet’s “synthesized, galactic punk sound.” Today, rather than your typical review, interview or similar feature piece, we’re both lucky and stoked to have Lena share an incredibly fun and original short story simply titled “Lost Piglet.” It’s creative, it’s artistic, it’s abstract, and it’s exactly what Secret Shame deliver with their music, performances, and, clearly, their art in general.

Stay “Calm” while digesting the awesomeness that is Secret Shame’s music:

“It’s like…The world is this big swimming pool full of colors, and I’m drenched in ink.”
They stared into a gurgling ether. Their eyes were purple, with silver clouds slowly moving inside. The piglet was happily drinking in the corner. They lay down and stared out from behind a black waterfall.
“It’s disgusting. It’s all over my arms. The ink is. I wish I could be a part of the colors but I’m just not. So there it is, then.”
They leaned their head back, forgetting what people were. “I kind of like it, though.” They were more serious than one would think. But then they would laugh, as if having to get it out.
“That tree looks like a dick. Over yonder, look!” And then they would make a sexual gesture, and then they would forget all of it. “Fuck y’all then, I’m gonna read this book about Ian Curtis. He was fucked up, y’know.” And they would sort of read, looking so focused, skimming eyes on the words—but the words just washed over the surface. They did indeed have a world of colors inside their brain, and maybe someday they would see it. There was really no reading. Only the perpetual ink. The thick, dark ink that filled the front of their brain, palpable and eternal.

The piglet wandered off and found one hard boot, and climbed up on it.
“Hello, tiny oinker.” A frazzled young woman spoke.
“Jesus, I’ve had way too much caffeine. I’m feeling WILD!” She started barking. Not barking the words out, but barking, generally. The piglet was very intrigued by this, and began to wag its tail. The young woman couldn’t stop touching her hands to her face and hair. It was weird and animalistic. She looked tired, but her eyes were excited.
“Come here, look at this,” she said, in between yips and snorts. “Look what I see!”
It was nothing but a small pool of water, reflecting nearby plants and filled with pebbles.
“Look at these colors—and there’s a dark face, with sharp teeth…hah…But the colors are pretty. I love lights. Do you ever see lights?” The piglet was done with this conversation entirely, and left. “I’ll just shut the fuck up, then.” She continued to stare at the puddle, gently touching it. Instead of a brain and organs, she was filled with small bright orbs.

The album Dark Synthetics was release on September 6th, via Portrayal of Guilt Records: 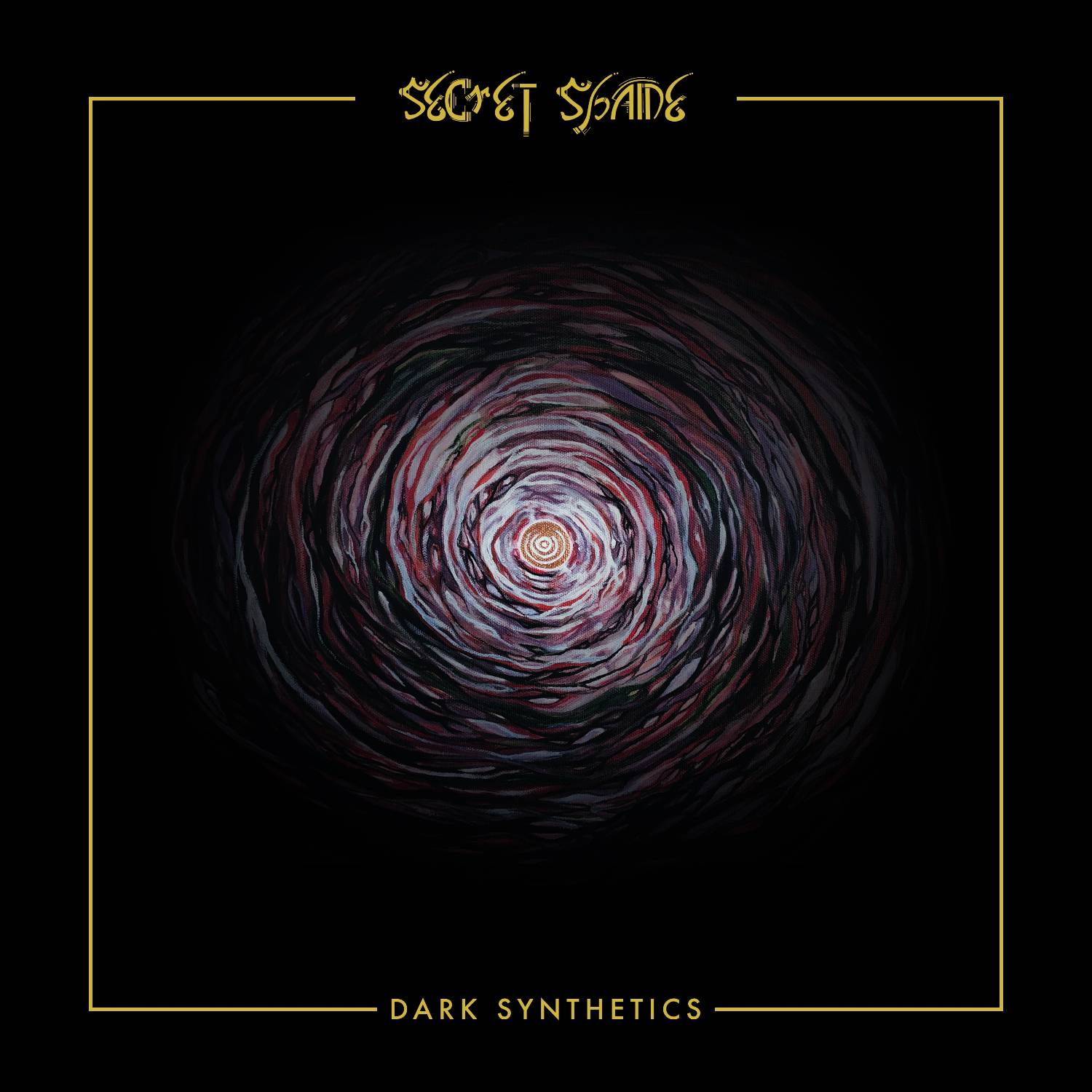 The oinker trotted over to two loud sounds. One loud sound was a tall, dark shadow drinking a thick vile liquid. The other was a being with a gentle exterior.
“Ooooh!,” The shadow squealed, loudly,
“Pigses deserve petses!!” The pig did not like it, but was curious for more. The shadow had a thick smoke swirling through most of their abdomen, into their neck. They had red dots behind the surface of their eyes, that bled through their vision, only sometimes. They often had a miscommunication between their limbs and head, and many clanging sounds would compete within their mind at any given moment.
The shadow reached down and plucked the piglet up into the dim sky. “I love piggly wigglies!” They shrieked. Then their dialect completely changed.
“This thing’s pretty fuckin’ cool though, huh? Look at these wiggly little beans.”
The gentle being, who was patiently staring at the shadow, spoke up at this moment;
“They aren’t BEANS, they’re HOOVES. Jesus Christ.”
“Nah, they’re little toe beans, see?” The shadow insisted.
They were indeed hooves. Only cats had beans.
“Whatever,” the being grumbled, “As I was saying—the new record that band put out was so fucking awesome. It was different, y’know, like it wasn’t as heavy but it’s definitely still so dark and I respect them for not doing the same old shit, y’know?” He looked up, passionately trying to have a conversation with a large void. Blue patterns pulsed across his forehead, and numbers appeared on his skin. He had no problem with it anymore, just accepted that that’s how it would always be.
“Beanie-weenie baby-waby beanie-” The shadow repeated to the piglet, but more so to itself.
Flowers grew, fast, and then died just as quick. Angry music swirled up into the trees.
The being sighed and walked away, to sit in a dark clearing. His brain, filled with sharp ticking sounds, poked signals into him, so that he would be at maximum capacity. He had to be at maximum capacity. God, this heat was fucking his stomach up—he hadn’t eaten all day, either. He rubbed his temples.
Some twitchy animal darted past, and nearby water crashed onto grey fog.
The beings’ eyes were smoky and dark. He wants to know more about how they got that way, but he doesn’t have time.
Someday, he will.

The piglet was tired and trotted to a serene place, quiet and beautiful.
“Hello, little one.”
The words were spoken in soft tones from a mossy corner where crystals grew from thick air. The voice that spoke those words belonged to a man who was just a giant smile.
Smoke rolled across the ground.
He stumbled over to the piglet, and held it in playfully awkward ways. He buried his face in it’s skin. You would think he was mysterious if you saw him from a distance, and maybe he was, but regardless, he was a jackass. He was often smarter than he wanted noticed, and herbs grew from his fingers. Was he clueless? Probably not. In his heart there were dead things and living things, collapsing onto each other in destructive harmony.
Black clouds filled the atmosphere and golden swirls made lines across the sky.
“Want to play a game?” He smiled.