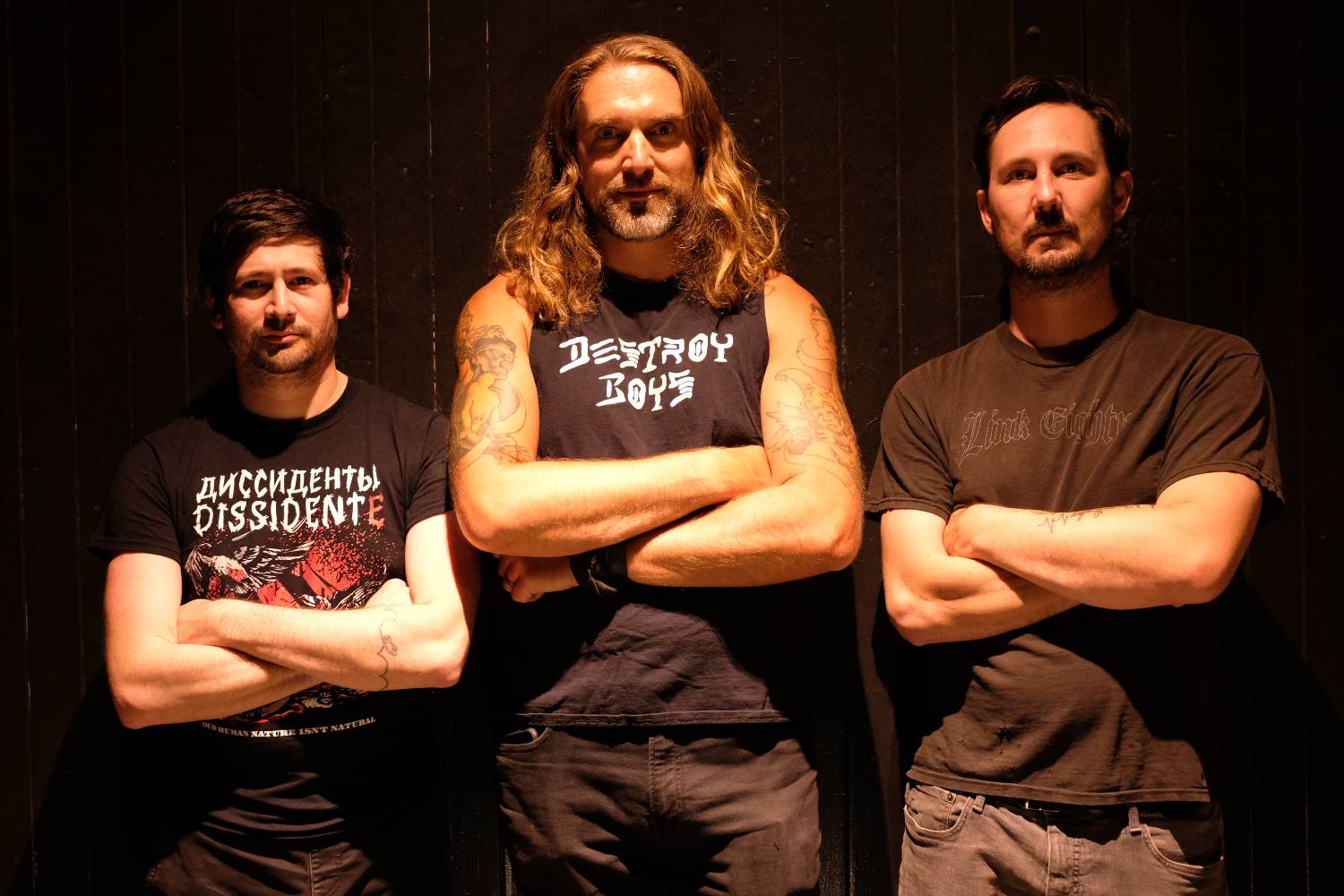 We don’t do ska very often, but when we do, we do it well! East Bay, California ska-punk band Omnigone are dropping a brand new record titled No Faith and we have the exclusive premiere for you. No Faith is due for release tomorrow via Bad Time Records so make sure to pre-order/purchase it right here. Omnigone is a relatively new group within the music scene in their area, but the musicians that compose said act has been active for decades. Guitarist and lead singer Adam Davis, in particular, may be a familiar name due to his time in Link 80, a band he joined 20 years ago and which left their own legacy of success structured around combining ska with aggressive and politically-motivated hardcore punk. They were influential within their scene and ultimately helped change the meaning and sound of ska-punk.

Link 80 is no longer together, but Davis has decided to carry on with his new band Omigone, in which he’s joined by fellow former Link 80 members Barry Krippene and Steve Borth, along with a rotating lineup that also included Justin Amans (Kitty Kat Fan Club, Obikubo Station), Jeremy Hunter (Skatune Network, We Are The Union), Bootie Pook (Beat the Red Light) and more. With such a diverse cast of talented contributors, Omnigone had no trouble fueling the creative process on their way to recording thirteen new tracks that now make up their debut full-length No Faith. Musically, the album weaves aggressive anthems across genres to create a fun, but intense and dynamic listneing experience that’s most attractive to fans of hardcore, punk and ska.

Commenting on the release of No Faith, Davis said, “Hello. It’s 2019, I’m 42 years old, and I just released a ska-punk album. Why? Long story short: the Link 80 reunion in 2016 planted the seed for this album. Playing those songs with my friends and seeing the reaction of the audience, people I had met over a 20+ year period, made me want more. It took me until late 2018 to give this idea a name and start recording songs. It’s been a great feeling creating something new with my friends. Anything you want to do, start today.” Those are highly positive and motivational words coming from a man who has experience on his side. Davis and his fellow collaborators have created a promising debut album that shows that there’s a lot to look forward to for the future of Omnigone.

Have a little “faith.” No Faith is a banger of a record. Listen now:

In honour of our unveiling of the new record today and the release of No Faith tomorrow, we spoke to frontman Adam Davis about this exciting new release and the creative process behind its writing and recording. We also spoke with Adam about how No Faith differs from anything previously offered by Link 80. Davis also adds a lot of insight and depth into what the album’s overall sentiment is and that it acts as something of a statement on current culture.

“No Faith” is an interesting name for an album, one that insinuates some type of meaning or concept. Can you let us in on the backstory and what No Faith is all about?

Adam Davis: “‘No Faith’ is a statement against the state of the world. Against the government, organized religion, the status quo. The title comes from a lyric on the album, ‘no faith, but I believe in me.’ It’s easy to dismiss your own dedication and hard work in favor of the opinion of naysayers. This album’s theme is believing in yourself, removing the barrier of self doubt and living for today.”

Now Omnigone may be a relatively new band, but it’s not like you’re a bunch of 21 and 22-year-olds trying to find their way in the music scene. What’s it like releasing a debut album in your early 40s?

AD: “Our culture, and especially the music industry, puts a high value on youth. By the time you’re past 25, you’re seen as beyond your prime. Music is for everyone, not only the young. I wouldn’t have guessed that I would be putting out a new album at 42 with a new band, but here I am. I feel like it’s taken me this long to figure it out. 42 doesn’t feel as old as I thought it would.”

The brief, but poignant “Rewrite History” is a good idea of what to expect on No Faith:

How long has No Faith been in the works as a full album? Are these songs written over the course of your musical career, or are they all recent creations?

AD: “We actually didn’t set out to create an album. We went into the studio to record a bunch of songs. When we were done, we had a cohesive album. It came together really naturally. All of the songs on No Faith came about in different ways. Some were written specifically for the album, some were ideas we worked out in the studio, others had been around in one form or another since 2014.”

Now Omnigone, of course, rose out of the ashes in a sense of Link 80, a successful and politically-motivated ska-punk band. What would you say to listeners who are interested in knowing how No Faith differs from Link 80 or what new elements it brings to the table?

AD: “Link 80 had a complicated history packed into a short period of time. I joined the band in 1998, and there was already a lot that had happened. The five years I was in the band had their own ups and downs. When we played the reunion shows in 2016, there was a lot of baggage involved. Omnigone builds on the sound Link 80 is known for, without being restricted by self-imposed rules. The writing process in Link 80 was slow and democratic, with Omnigone I write all the songs and we work fast.”

There is a pretty significant cast of collaborators who helped work on No Faith. What was the approach or the thinking behind having so many different musicians contributing to the final effort?

AD: “It’s all about making the most out of my time. I’ve met a lot of great musicians over the years, but everyone is busy with their own lives. With a static line-up, you have to work around everyone’s schedule. This is the best of both worlds. Also, in the studio, the role of the drummer is demanding. I’ve been able to get the most out of an eight-hour recording session by switching out drummers when they get tired.”

Check out the slithering artwork that accompanies No Faith: 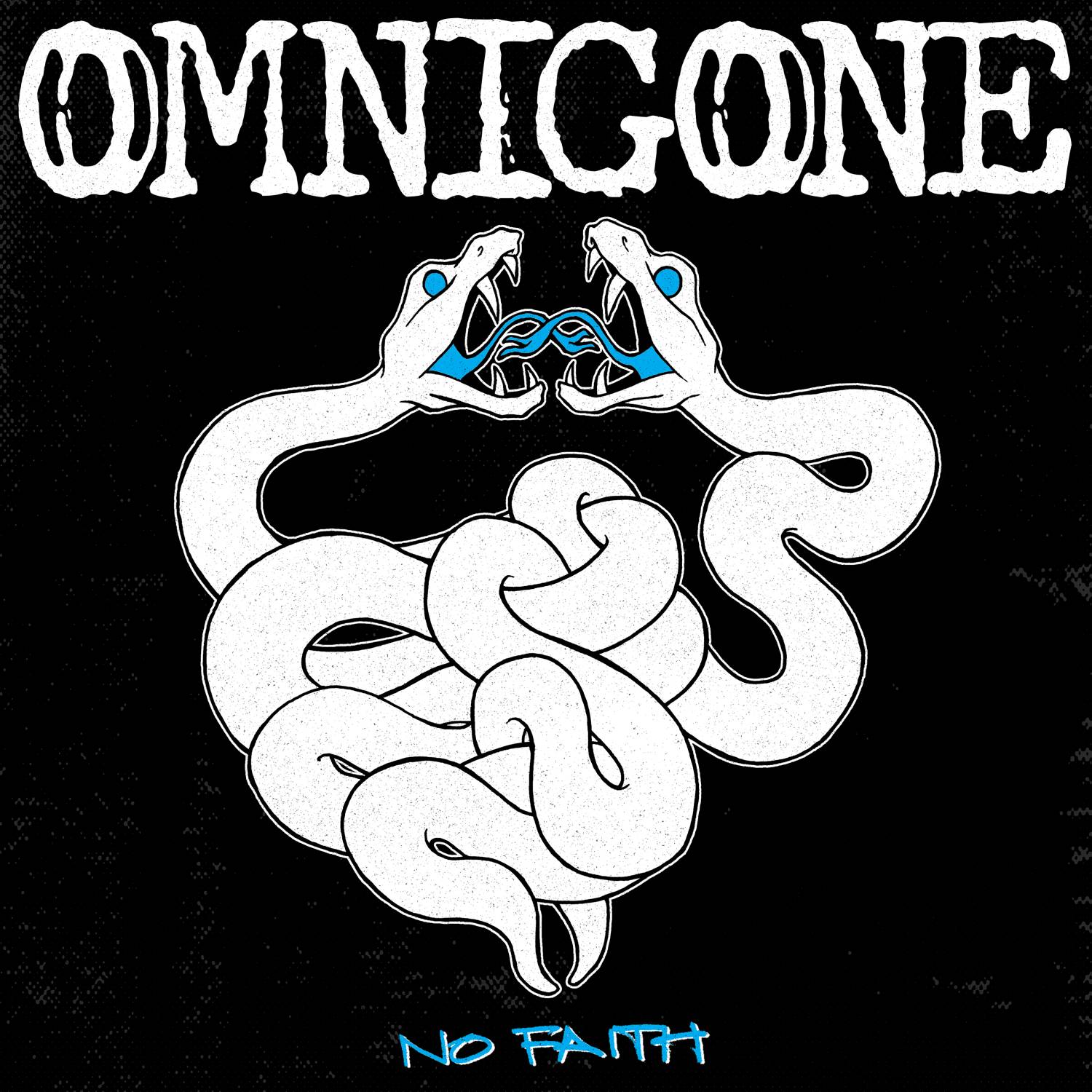