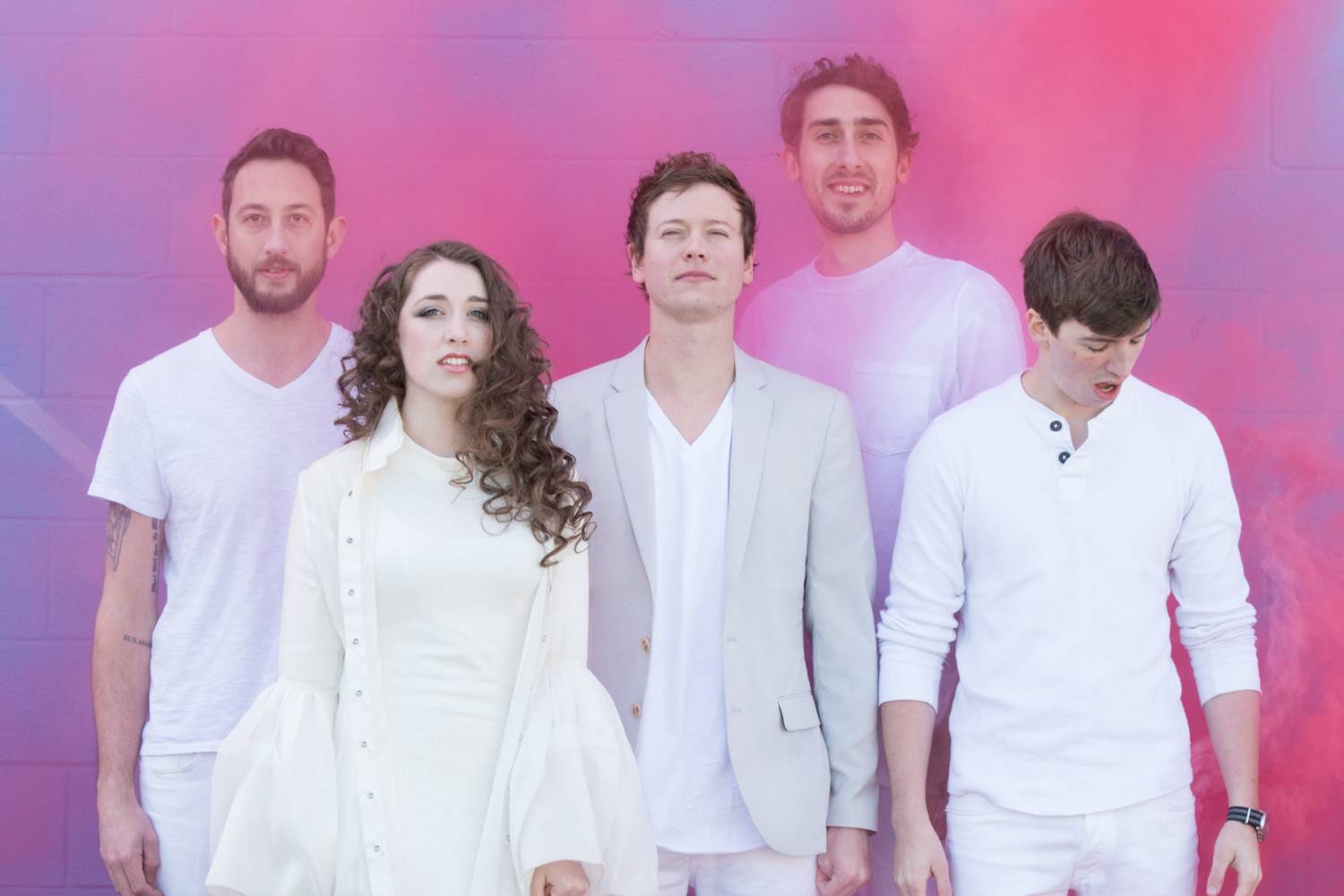 Guest Blog: REVEL IN ROMANCE Share an Inside Look at the Shooting of Their ‘Smoke and Mirrors’ Album Cover

In their five years together, alternative pop-rockers Revel In Romance have approached their music with passion and attention to detail unmatched by many other modern musicians. Rather than just focusing on the music, the Atlanta, Georgia-based band have systematically honed in on every part of how their music and brand are represented; including but not limited to their album artwork, stage show, and camera angles and editing used in their videos. An admirable focus to say the least, and one that the sibling team of singer Saxony Raine, bassist Remington Rehklau, and guitarist Parker Rehklau ensure no stone is left unturned.

Rounded out by guitarist Devin Maier and drummer Mark Robinson, when it comes to the music, Revel In Romance’s debut Right and Wrong EP was released in June of 2016, with two of its tracks reaching number one on a few U.S. and UK radio stations. Their latest offering, the single “Young,” (stream on Spotify) serves as an appropriate introduction to the group’s sound, but truly takes things to a deeper level than on past outings. It takes what the band members were particularly pleased with on their debut and further formed those elements into their current sound; one filled with energy, passion, deep lyricism and meaning.

This all said Revel In Romance guitarist Parker Rehklau joins us today for a guest blog to share the nitty-gritty details about the shooting of the album artwork for their single “Young” and their upcoming EP Smoke & Mirrors, along with exclusive behind-the-scenes shots of the day of the photoshoot.

01. Shooting for “Smoke and Mirrors” was a multi-step process. We initially thought we could simply go into the studio and conquer all that we needed for our mirror shot in a single day. However, we knew we wanted some glow in the dark elements to it because our sound has (on this latest album) been infused with some EDM/synth vibes laced into our core indie-pop base. We wanted our fans to visually see the subtle transition of our sound.

However, we discovered through all of our experimentings that the lighting and etc. would need to be far more extreme. In this first shot of the day, we were simply experimenting with multi-reflections. We’d set up in the dressing room of the photo studio, adding a large mirror on an easel (you can see one of us still holding it in place and our photographer, Jeff Walton, in the shot) across from the main make-up mirror.

02. In this second shot, you can see where the intensity of our blacklight against our glow makeup just didn’t really give us enough contrast.

03. After lots of experimenting with lighting… Using just the handheld blacklight vs. the black light and supplemental room lighting so you could see our faces. We ultimately spent the rest of day one just working on potential camera angles.

As promised, here’s an exclusive photo gallery offering an even more in-depth look at the shooting of the band’s cover artwork: 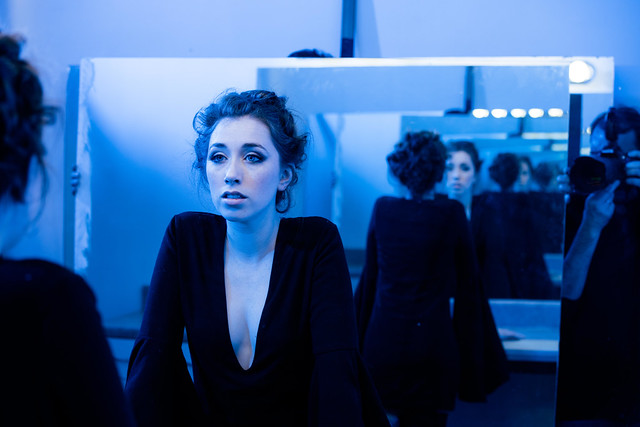 04. and 05. The other thing we didn’t count on was that the dressing room’s tight space would prove damn near impossible to capture a group photo that reflected every band member into infinity. In every shot, one band member, or the other, was blocked in some way. By the end of the day, it became apparent we’d have to shoot another day.

06. In order to think things through for the “Mirrors” photoshoot, and to have time to gather all the extra materials we’d need, we decided to move forward with the “smoke” shots first. Parker had already scouted and found a blue wall in downtown Atlanta to fit our color theme for this EP of pink and blue.

Check out the Smoke and Mirrors artwork: 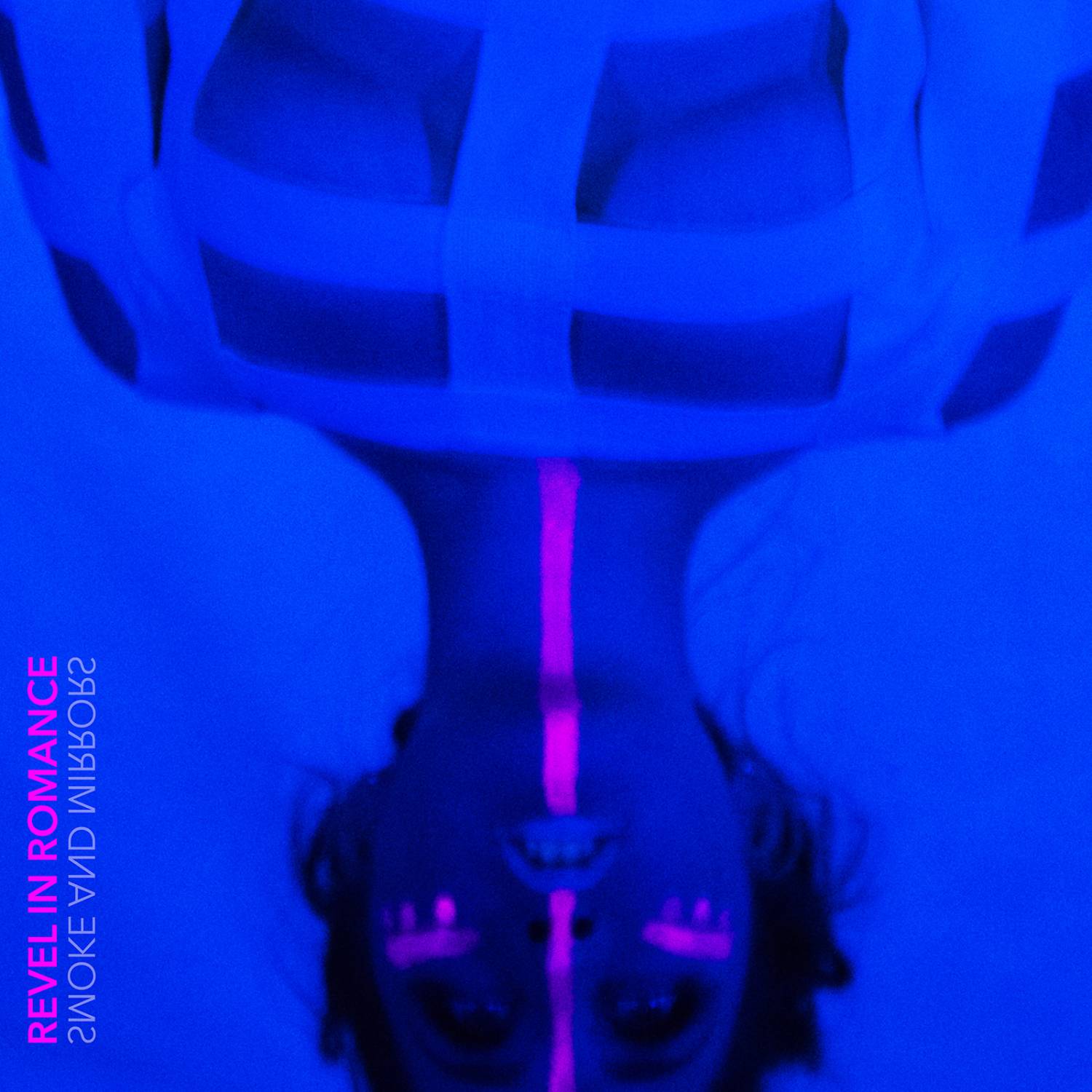 09. And, there were moments where after lighting the smoke bomb or trying to spread it around we were unable to make it back into the shot before the smoke dissipated.

10. There are also those shots where reigning in all the band members just doesn’t happen… No matter how limited the number of smoke bombs, how much the day is costing, whether the sun is going down and the light will be gone, or how much the photographer is struggling to just get just one shot without eyes closed… someone in the band will just need a break. In these shots, we’re trying to get a soft fog shot from the lighter pink bombs we’d purchased. Devin is setting off the smoke bomb while Remi is obviously not paying attention. By the time Devin can get into place Remi is on the phone.

11. The “smoke” photoshoot day ultimately produced a ton of incredible shots. As did our first day of “mirror” shots. Working with a calibre photographer like Jeff Walton, who is willing to experiment with us, we know that even in the most challenging of situations and even if the shots aren’t matching our initial vision, we will always come out with some stunning shots.

12. Before shooting, we really didn’t have a plan for what we’d put on any single releases off the EP because we had not planned to release any singles. It wasn’t until we spoke with our PR specialist, Jamie, from For The Win Media that we decided to release a few singles before releasing the whole EP. It was then that we were truly grateful for our multi-day experimental shoots. Our single cover for “Young” ended up coming from the “Smoke” day shoot. We knew we wanted the cover to reflect the most smoke we had photographed but still have a visible face. And, we wanted a lot of pink to differentiate this single from the first one off the EP.

Check out some older material from the band with the video for “Echoes” off of Right and Wrong:

13. When we finally reshot our “Mirrors” session. Several variables changed from the first “Mirrors” photo day:

– Instead of using the photo studio, we shot in our basement. It was easier for us to control the amount of light in the room. We brought in a ton of black lights and placed them in multiple locations.
– Instead of black clothing, we decided to wear white. That posed a bit of a problem because Saxony’s white outfit from our “Smoke” shoot had ended up getting a zillion tiny burns in it from the smoke bombs and she had thrown it out. The only thing white in her closet, photo-worthy, was a sweater made from strips of fabric. Little did we know that by wearing just it and nothing under it, (other than tons of tape). It would become iconic.
– And instead of trying to do multi-reflections we went for just one.
– The first tests were crazy contrasty because we started with a black cloth behind us.

14. At our first break, when we’d felt we’d probably conquered the group shot, we stepped back to review everything. That’s when we decided that the black cloth was possibly taking away from what the shot could be. We opted to try a white background cloth instead. Like magic. There it was. The visual effect we were looking for.

15. When determining what to use for our “Smoke and Mirrors” single, it was important, since it was the title track off the EP for it to nod at what the EP cover art should ultimately be. We don’t want to give anything away, just yet, for what the final Smoke and Mirrors cover art will be (though one can only guess where all of these photo elements might lead). But, the “Smoke and Mirrors” single art is actually the mirrored reflection portion of a stunning full photo shot that we couldn’t resist using. As for the typographic elements… we thought it was important to have to read the titles off this EP in a mirror.