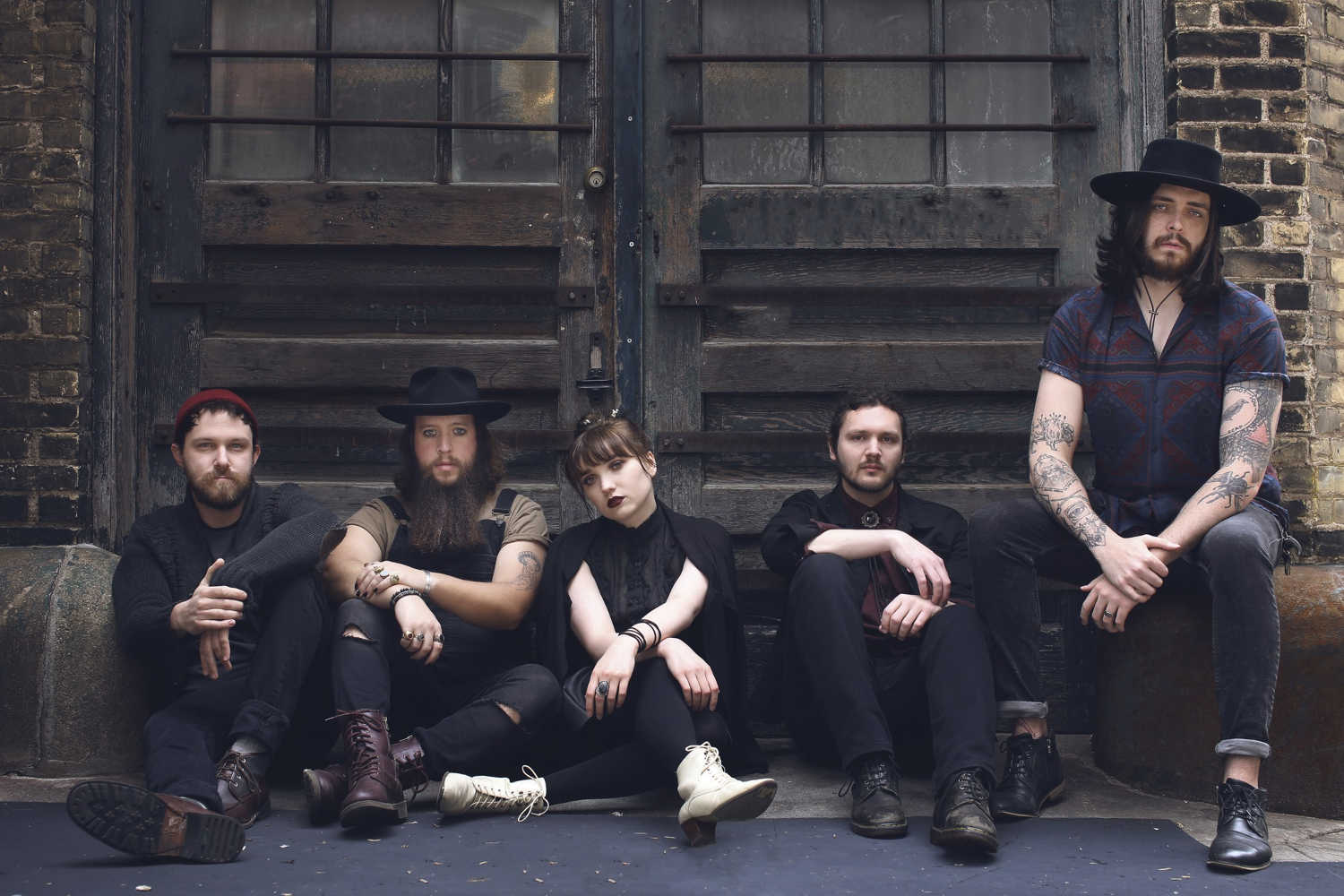 Geared Up: COYOTE KID Guitarist Austin Durry on His Unique ‘92 Davenport Guitar, and Affection for Tremolo

Minneapolis is “coyote” territory, as in the home base for Coyote Kid, a cinematic alternative rock band that has made its presence felt over the last few years. It’s a bit difficult to describe this talented quintet’s sound, but they put it as some kind of mix between Murder by Death, My Chemical Romance, and Gogol Bordello, with a spaghetti-western, Quentin Tarantino twist.

Musically, Coyote Kid is defined by precise, but also primitive jungle drums behind the driving force of Austin Durry’s gritty vocals and the presence of guitarist Cassandra Valentine. You’ll hear the spaghetti-western theme most present on the group’s guitar parts, in front of growling bass lines. Dury’s lyrical content veers towards the influences of monsters and ghosts, murderers and thieves, love and guilt and a whole bunch of other stuff in between. Touring North America consistently since 2015, the fivesome has successfully found fans in between all the rock genres that you’d find in your local scene.

Coyote Kid has a new full-length record titled The Skeleton Man in the works, a large and aggressive, but more stylistically diverse album than any of the band’s previously released music. They currently have a Kickstarter campaign in full swing so if you’d like to contribute, do so right here. To get to know Coyote Kid a little better, we spoke with singer and guitarist Austin Durry about his favourite musical gear, most notably the very unique ‘92 Davenport guitar.

Beware of the “Femme Fatale!” Check out the band’s debut single off of The Skeleton Man:

Austin Durry: “I’m a pretty bare-bones guitar player. Almost no effects other than Tremolo, and a pretty basic amp sound. I think the key to the guitar sounds we get is my vintage jumbo hollow body electric guitar. It’s a quirky ‘92 Davenport named Jessie (literally, it doesn’t have a serial number, only a name written on the inside) that has the perfect Spaghetti-Western surf tone.”

Durry: “I refer to this guitar as my ‘spirit guitar’ because it showed up exactly when I needed it, and we have the same birth year. It has lots of strange issues, but they usually make for a really unique sound.”

Durry: “We used this guitar on just about everything from the new album. I’m more of an acoustic guitar player by nature, but the jumbo hollow body gives a lot of room to play aggressive and rhythmic like an acoustic guitar, but still has the high energy bite of an electric. We really needed that on this record.” 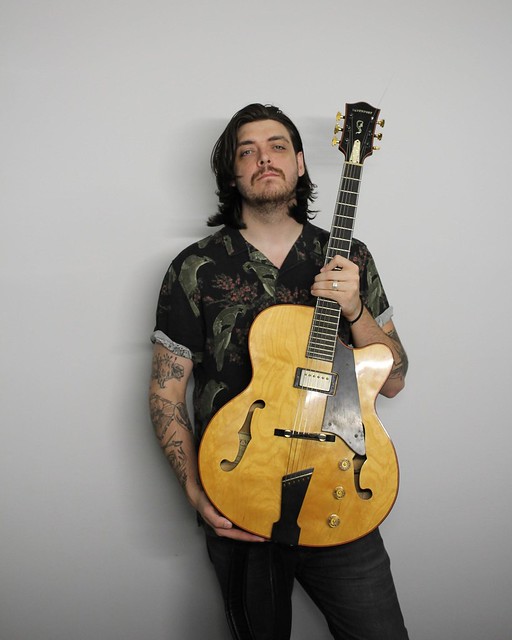 How do you recreate your album guitar tones in your live set?

Durry: “We stay pretty true to the sound of the album in our live show. No tracks or anything, we just recorded it relatively straightforward. There are definitely things in the album we can’t do live (like a full choir) but I sort of like that it’s a different listening experience.”

Durry: “The main complaint I think my bandmates would give is that I break strings constantly. It also has a knack for feeding back at certain frequencies, but it’s all a part of the charm I think. It has a really nice sound and feel. And being a 6′ 4″ guitar player, I appreciate that it’s big enough to not look like a toy when I hold it.”

Durry: “I do! I have a Gretsch hollow body right off the production line. It’s nothing fancy, but it’s more reliable in a pinch. Definitely not my preferred guitar, but it’s definitely a necessity on the road.”

Coyote Kid pull out the acoustic guitars for this rendition of the title track of off The Skeleton Man:

How long have you had this guitar and would you ever change it?

Durry: “I picked up the Davenport in 2015, I believe. We had just released our first album and I needed something that could perform like an acoustic, and wale like an electric. I went to my favorite guitar shop in Minnesota, LaVonne’s, and there it was. I use it just about every day. I’d upgrade if I had the opportunity, but I don’t think I’d sell it.”

Durry: “I have a wild story about this guitar, but I was definitely the one going wrong. We had a show in Minneapolis at a hip little sit-down place right along the river. There was an old man outside playing the accordion on the street. We’re inside sound checking, and this old (we’re talking like over 80 years old) accordion player slowly walks in and he’s staring at my guitar. He asks ‘is that a Davenport?’ and I’m like ‘yeah!’ assuming he read the headstock. Nobody knows Davenport guitars.

But now it’s time for us to actually start playing and this guy is right up close staring at the guitar and right as I’m about to start he goes ‘I built this guitar… That’s Jessie isn’t it?’ and I was shocked. It only says Jessie on the inside of the guitar. I said yes, and he just smiled, touched it once, and then walked out the door. I never saw him again, but I’ll ever forget it. It was wild, and I was so bummed I couldn’t have talked with him more.”

Hear the howl of Coyote Kid with the cover art for their new album The Skeleton Man: 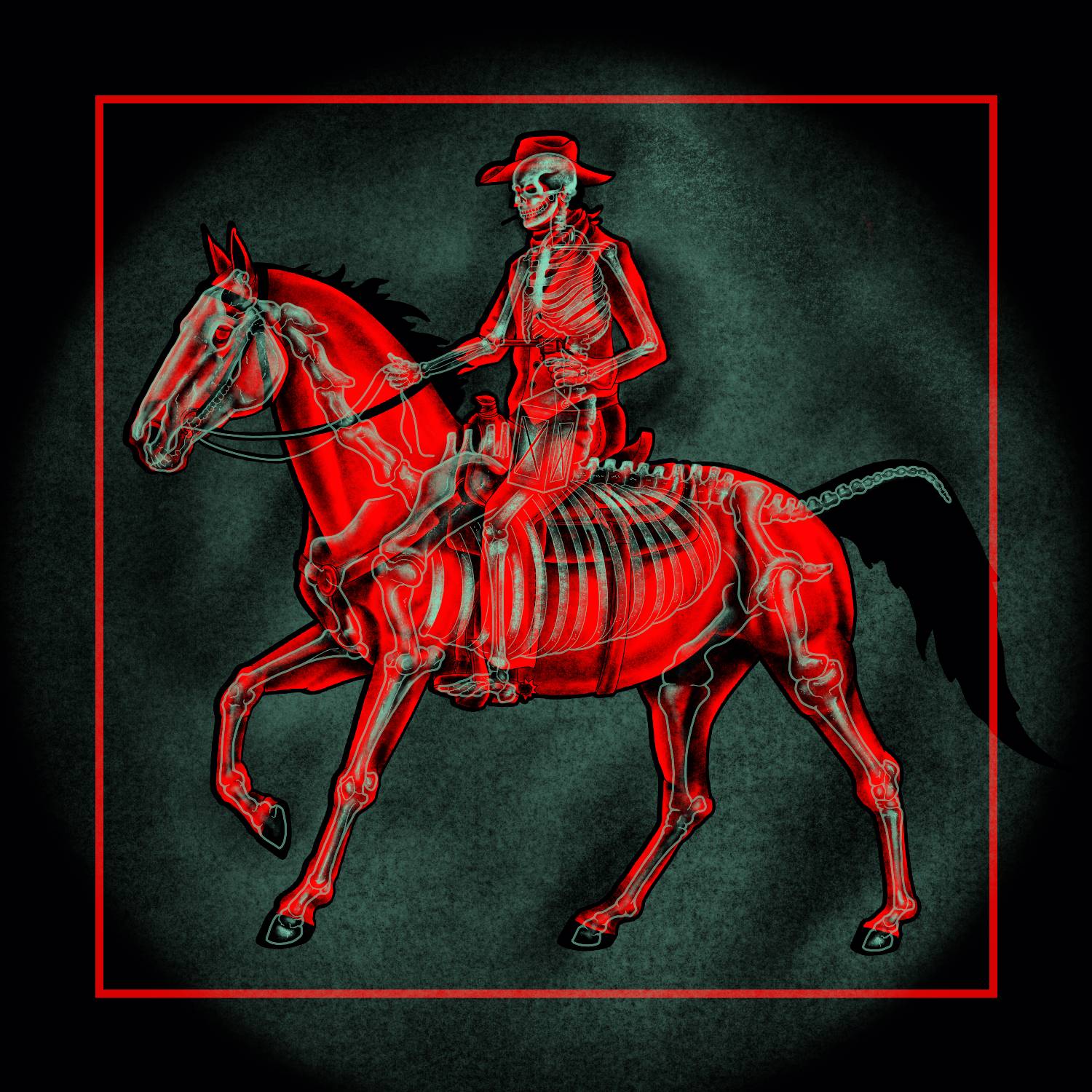