Are you ready to make your blood dance? Well, maybe not your blood, but at least your body, thanks to the exclusive premiere of Makes My Blood Dance’s new “Sick As Our Secrets” music video. The new song (stream it on Spotify or Apple Music) is the title track off this New York City “dance metal” band’s upcoming new album.

For the track’s video, the group pulled out all the stops and included live performance footage, a thoughtful storyline that unfolds as the video goes on, and some awesome interpretive dance choreography. The video is a blast and very much reflective of this diverse and multi-faceted act who mesh together grooves, disco, glam, electro-pop and ultimately, metal. This all said, amidst the grooves and chaos is a message of hope. We’ve all got secrets we lock into ourselves, so we’re in a sense all a little “sick.” But the fact of the matter is, we’re not alone; it’s a bond which conjoins us all, in a sense. And judging by singer Evan Russell Saffer’s vocal wails and socio-political lyrics, the world is at a rough spot, but that doesn’t mean that we have to be as well.

The minds behind Makes My Blood Dance also include guitarist and synth master John Polimeni, bassist Alexander Nikitin, and drummer Carlos “CK1” Guidera. The foursome is really damn good at creating musical mayhem that sounds as alive as it does fun. These dudes are in their element when they’re in a dingy rock club, something you see plenty of in this new video. Saffer co-produced “Sick As Our Secrets” with director Derek Soto (Sinestra Studios) in control of the video’s direction. But enough beating around the bush, it’s time to learn a little more thanks to a little Q&A action with Evan Russell Saffer himself. Read on….

Watch the other recently-released music video for “Beaming Right Up:”

I love the sort of dark, dingy, rock club feeling of both “Sick As Our Secrets” as a song and also the music video. Was the intention to create a video that was representative of the indie rock culture of heading to the club when you’re a kid to check out the latest band?

Evan Russell Saffer: “The intention of the set was to create a ‘dream world’ which is inspired, alive and colourfully juxtaposed with reality which can be dim, superficial, and fearful. It shows the kid’s peers in a lifeless loop without any expression or colour. Those are the ‘too cool for school kids’ who think they are happy and glamorous on the outside, but inside they are superficial and uninspired. In the dream world, you find the Eyegazer who is the kid’s love interest. She is dancing and switched on and exuding love which is how he sees her in his own mind. You also find the members of Makes My Blood Dance in the dream sequences and in the real world as the activators and narrators. The entire dream concept was shot in a basement of an old church but several of the vignettes are very high school, with bathroom stalls and hallways and the gym of course.”

This video and song remind me a lot of a down and dirty Motley Crue video like “Kickstart My Heart” from back in the day. Was that ‘80s rock style of video what you were trying to mimic with “Sick As Our Secrets?”

Saffer: “We definitely ripped a page from the ‘80s handbook when it came to being playful and fun and sexy. We married it to a more socio-political and spiritual angle which is reflected in the lyrics and storyline of the video.”

Check out the “fiery” cover artwork for “Sick As Our Secrets:” 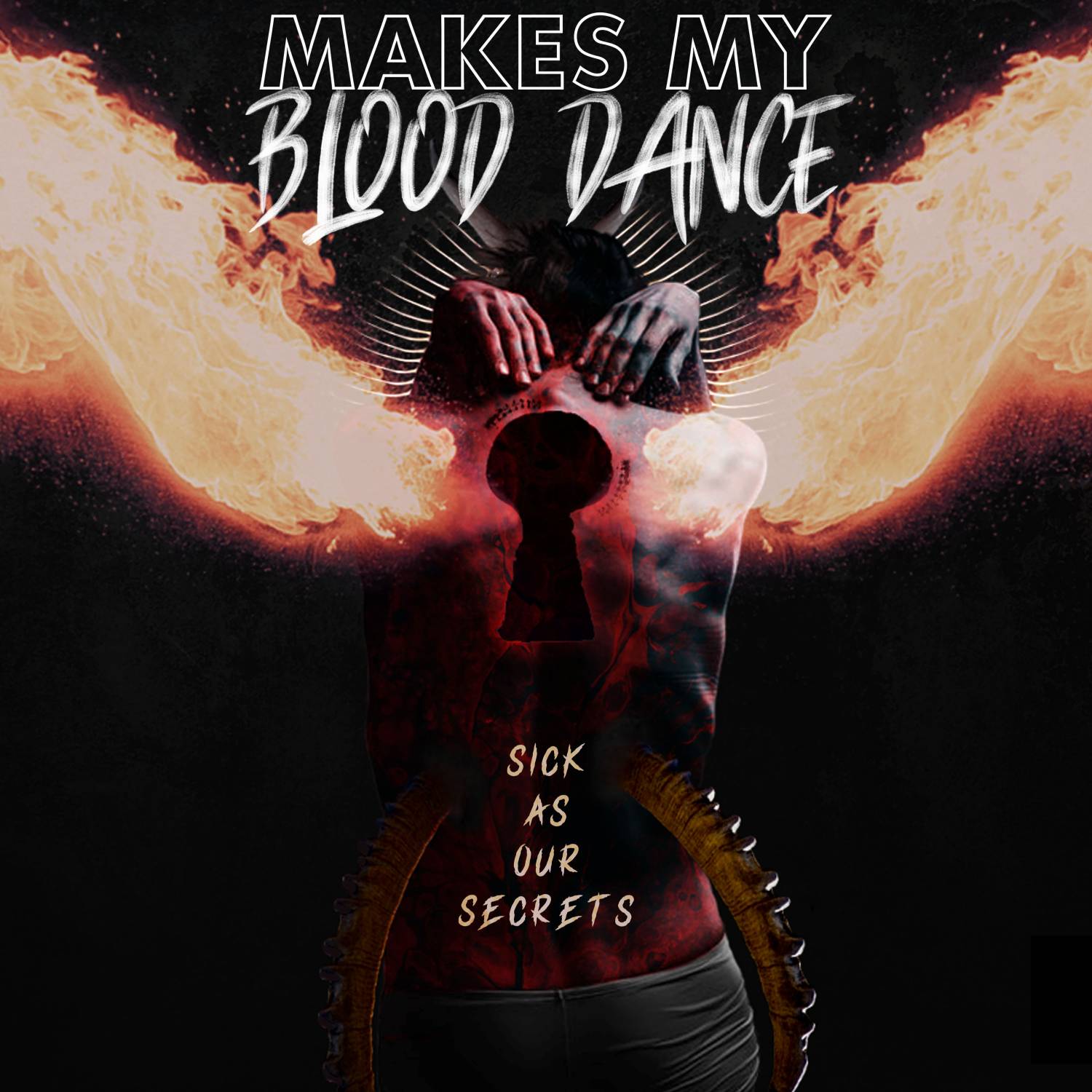 There is also a small narrative or story viewed from the perspective of a young guy going on intermixed with all the shredding and dancing. What is this aspect of the video supposed to be representative of?

Saffer: “The narrative is supposed to depict our desire to feel connected, to be a part of something and feel good about it. The kid is in a tough situation at home, an abusive father and manipulative female figure in the house. He tried to fit in with the ‘too cool for school’ kids but they aren’t having it. That is mostly a result of this huge burden the kid is holding inside like so many of us along with the self-obsessed culture that surrounds us. Our inner dialogue, our storyline that we keep playing in our hearts keep us unconscious and unable to connect in lasting ways…… our secrets make us sick. They weigh us down and hold us back from truly connecting.

The kid is able to transcend that and get the girl and be free once he connects with the music and gets inspired (i.e. Makes My Blood Dance). John and I have had a spiritual connection from the beginning of this project and we talk about that stuff daily in order to get closer to the music we want to write. I have struggled personally with all of this and continue to struggle with it, so we make it our focus in our music to help heal ourselves and others. Music has always been a healer for me and I think our message is more focused on that then ever before.”

A welcome escape from the down n’ dirty rock n’ roll is the dance interludes. What was the thinking behind having the little dance sequences intermixed in there?

Saffer: “Makes My Blood Dance has a very strong dance element to the music. We move a lot at our shows, everyone loves to dance and we have certainly embraced being called dance rock or disco metal. Our first video for ‘Beaming Right Up’ also had a strong dance element. I wanted to take that into a present-day setting for ‘Sick As Our Secrets’ and we fell in love with Olivia’s modern ballet style. She seems so free and alive when she is dancing and I wanted to capture that on this song, that is what dreaming big means to me….. being free and alive and totally accepted for who you are. As many others have said before me, you are only fully embraced when you are free and alive and honest. That’s the biggest message behind ‘Sick As Our Secrets’ and the true meaning of the song.”

What was it like shooting the video itself? A lot of artists hate doing music videos, but this one looks kind of fun. Take us a bit through the process, what it was like, how long it took, etc…

Saffer: “I love it. That said, it’s a lot of work and definitely a departure from songwriting or performing so I can see why many straight-up musicians want nothing to do with it. This is the second video that I have produced for MMBD and I am so grateful that the band (John Polimeni, Alex Nikitin, Carlos ‘CK1’ Gordillo) and director Derek Soto are so supportive and let me spread my wings. I wrote all the treatments, scout the locations and run the castings, then we all pow-wow on each phase to make sure everyone is on board, but they definitely let me take the reigns on these videos and I’m grateful.

I enjoy people and organizing them and motivating them to get their best performance. I screened over 400 actors and dancers to arrive at the nine that we selected to be featured in this video. Having everyone on set and being surrounded by so much talent was a super high point for me. Our entire cast took to the direction very naturally and their performances blew us all away. You can see their personalities even in the official video poster that we released (available on the band’s official website). We were going from sunrise until late at night and at the end of one long day of shooting we all went out and felt so elevated on the energy, no one was going to bed.”