Hard rock heavyweights Black Star Riders release their new album, Another State of Grace, today through Nuclear Blast. With tour dates to follow later in the year, we spoke to frontman Ricky Warwick about the album, the input from the new band members and how he felt about the recent comments which saw bandmate Scott Gorham compare him to his idol Phil Lynott.

Firstly though, here’s a taster of the album in the form of “Ain’t The End of the World”:

Four albums in now, how does it feel sitting here talking about your fourth album as Black Star Riders?
Ricky: “Extremely happy, proud, honoured and blessed.”

Was there a long term plan when the band started out? If so, what was it?
Ricky: Not really. We knew we had written some great songs but we didn’t know how the album or band would be perceived. It’s all down to the fans that have made Black Star Riders the success that it is.

Although Chad has been in the band a while, this is the first album working with both Chad and Christian, how did that work out and what do you think they both brought to the record?
Ricky: Chad and Christian are both wonderful people. The positivity, creativity, work ethic and stellar musicianship they have brought to Black Star Riders has helped elevate the band to another level in my opinion.

In terms of songwriting, how does the process work. For example is the entire lyrical side of a BSR record left up to you?
Ricky: Yes. I write all the lyrics and the majority of the music. Christian contributed a lot of musical ideas on the new record too. Scott always brings in some amazing riff ideas and Robbie contributes riffs also.

Pick up your copy of Another State Of Grace from here and this is the artwork: 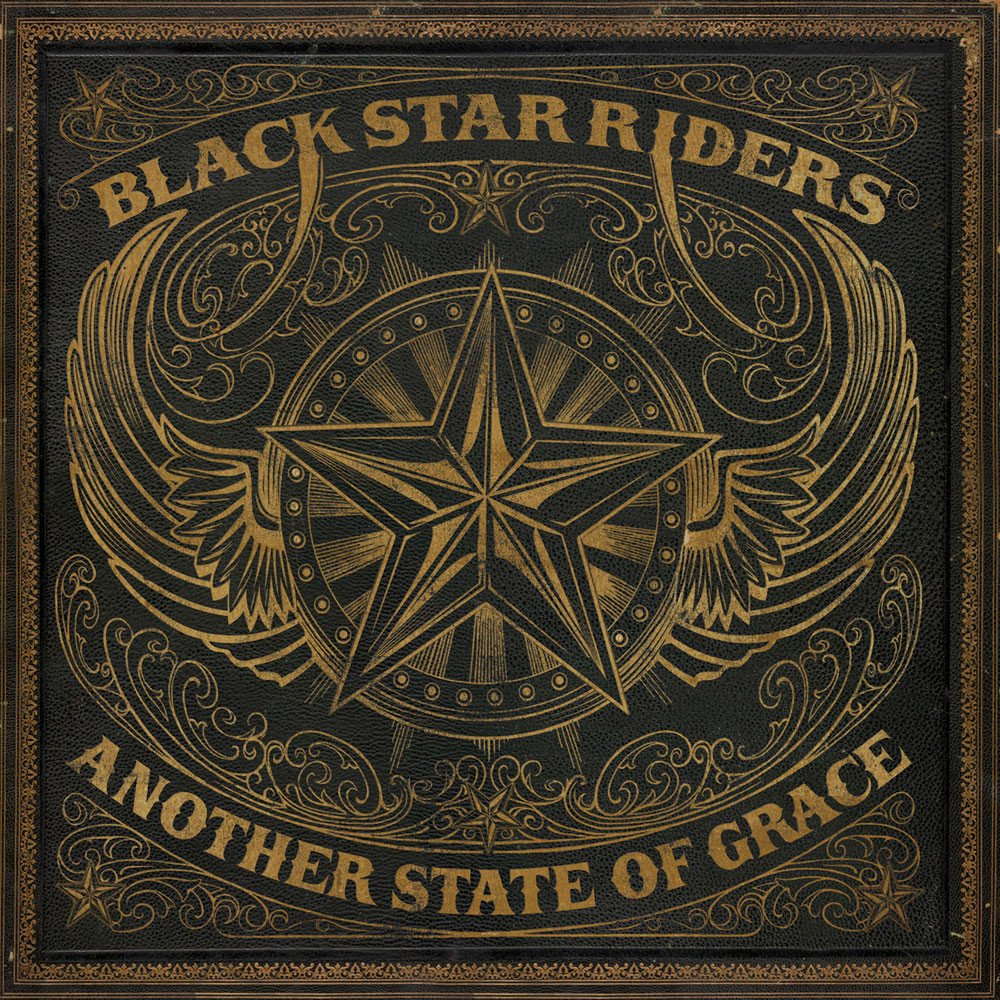 With two new writers contributing to the album does this feel like a new chapter for the band?
Ricky: Yes and no. I felt the band was in a very strong position anyway, with Christian contributing to the writing with his musical heritage and foresight it has not only cemented what we already had but made the future even brighter.

Obviously Scott’s connection to Thin Lizzy is always going to be there but with each album does it feel less and less like people see it as “Thin Lizzy under a different name”?
Ricky: Well, after 4 albums and 7 years I would like to think that people would now have realized that Black Star Riders are very much their own band with their own identity. Scott Gorham is a huge part of the Thin Lizzy sound, it is in his DNA, it’s his style and how he plays and we love that, so there will always be that influence in our sound but Black Star Riders is Black Star Riders and nothing else. Anyone who now fails to see that is not listening and just being lazy.

Check out the video for the title track of the album here:

Given Scott’s background though, how important is it to keep a balance of writing a fresh, modern rock album and keeping that classic Thin Lizzy sound that TL fans want to hear ?
Ricky: I think I kind of answered that in the last question. We honestly don’t have an agenda when we make a record. We just want to write and record to the best of our ability and try and create memorable relevant rock n’ roll.

In recent interviews Scott has compared you to Phil. Firstly, how much of a compliment is it for you that given your love for Phil and secondly, how much pressure do you feel about stepping into some fairly legendary shoes ?
Ricky: Obviously I am extremely flattered. Scott has been like a big brother to me for the last 25 years that I have known him. His belief and support in my ability has given me so much confidence as a writer, singer and performer. Yes, there is of course pressure, but it’s a dream come true. You can never stand in Phil’s shoes, all you can do is stand beside them and get an education. Phil is irreplaceable.

Check out this video of Ricky performing a classic with Thin Lizzy at Download Festival:

We’ve talked about Chad and Christian recording on the new album, how do they feel about actually being part of a BSR record ?
Ricky: From what I can see, they absolutely love it.

Thanks for your time Ricky. Just to finish, you’re heading out on the road as soon as the album releases, as a band you must be pretty excited about getting out and playing songs you’ve all written together. What are you most excited about for this record and can fans expect from the shows and the band in 2019/2020 ?
Ricky: Well, this is Christian’s first tour so that will be amazing. Four albums worth of material to choose from and the band is really on fire. I think people can expect a high energy anthemic, soulful, powerful and intense night of good honest rock n’ roll.