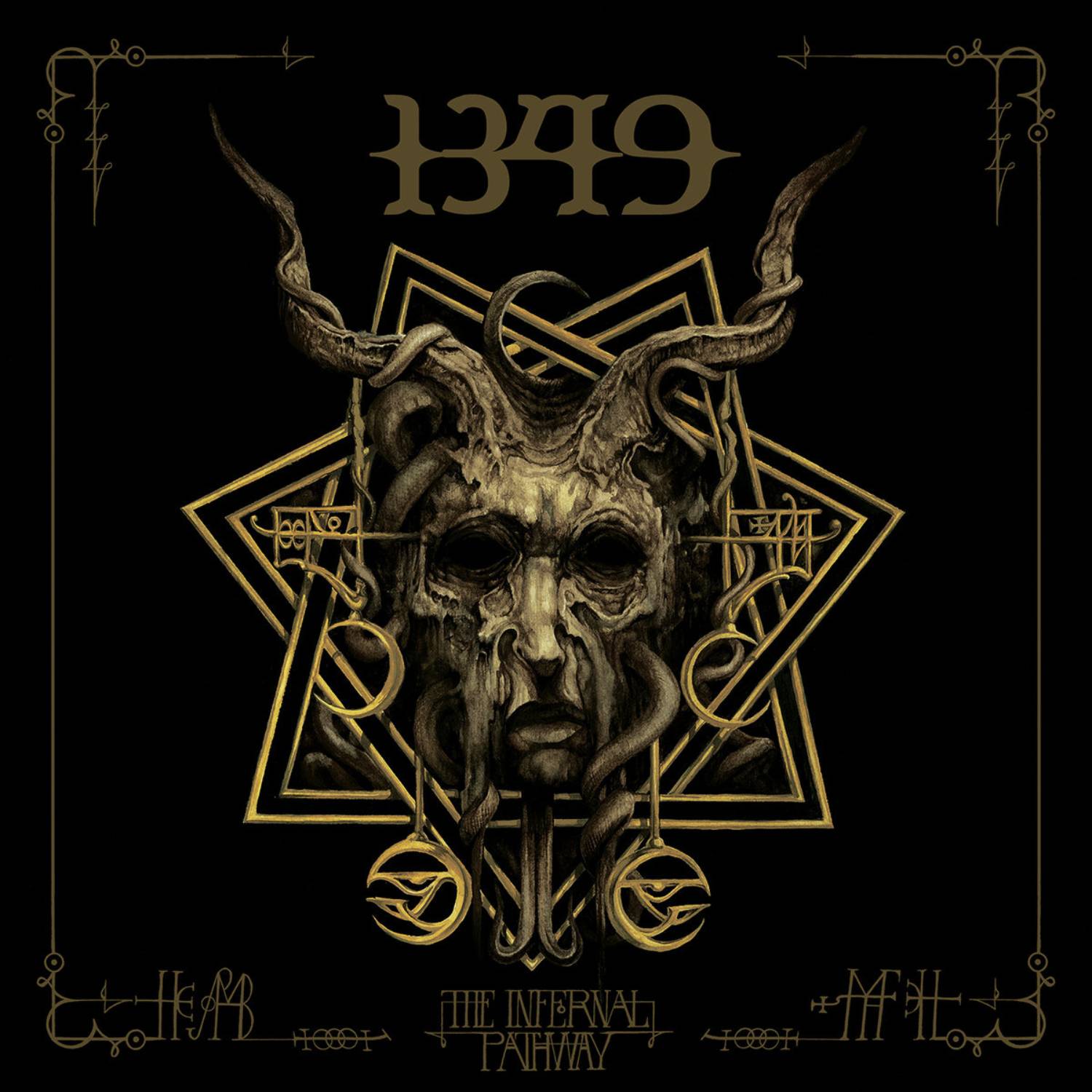 Massive Cauldron of Chaos, released by Norway’s 1349 in 2014, was in many ways the pinnacle of contemporary black metal, for me: blistering, fast misanthropy distilled into one unforgiving package. After hearing earworm hits like “Slaves” or “Godslayer,” I truly thought 1349 could get no better – no small claim, giving the indisputable quality of prior releases like Hellfire in 2005 or Demonoir in 2010. But all that was before The Infernal Pathway. (pre-order/save a copy here) This latest release takes the raw, unshaped materials of their discography up until this point, and re-alloys these into a purpose-built, honed, tempered tool of musical murder. Surgically sharp where needed, and brutally bludgeoning everywhere else.

Having reviewed their “celebration of Edvard Munch” single, Dødskamp, earlier this year, I was expecting some more of their new-found delight in melodic over rhythmic constructs to be present – what I wasn’t expecting was such an intellectual side to Archaon’s guitar work. Tracks like “Deeper Still” or “Stand Tall in Fire” are not just indicative of his technical mastery of his instrument (now custom built by the Lutherie Infernus in England – but his respect for the craft of songwriting. The “Tunnel of Set” instrumental/atmospheric saga begun on Demonoir continues, too, building thematically across chapters VIII, IX and X – itself a telling display of compositional chops.

“Through Eyes of stone,” released as an EP earlier this year, sets the tone for the entire record.

Make no mistake, though – showcasing a more profound musical presence in no way detracts from the hard-hitting, uncompromising assaults 1349 fans have come to expect. Album opener “Abyssos Antithesis,” for example, may start out with a welcoming, upbeat black-n-roll riff, but it rapidly becomes an all-out war on the senses, lit by tracer-fire lead work and underscored by the unmistakable percussive barrage only Frost can provide. Thrash (“Through Eyes of Stone”) and death metal (“Striding the Chasm”) influences may make themselves known, but the overall tone of the album is True Norwegian Black Metal at its finest. On top of the expected tropes (like the tremolo work and dissonance on “Deeper Still”) Ravn’s searing rasp is an essential aspect of this, as it still lends an aural signature to the proceedings. This is especially noticeable in spoken word passages, such as on “Stand Tall in Fire.”

If I had to have one glaring criticism, however, it would be the understated bass presence: Seidemann’s contributions are essential to the 1349 sound and I find this to be lacking on The Infernal Pathway: the low-end nastiness is still there, just not pronounced. It’s as if the contrapuntal figure Seidemann has played in the past has taken on a more supporting and less central role on this album. Perhaps its the digital release, but I am willing to wait for physical copies to hit the stores to test this theory – the mastering may not be as representative of the band as a holistic entity as I would like, but even so I’ll state unequivocally that The Infernal Pathway is still an incredible album.

The official stream of “Striding the Chasm” highlights the fast, structured influence of death metal riffing, but contrasts it with Ravn’s vocal style and Frost’s jazz-like sensitivity to shifts in rhythm, making for an entirely unique black metal voicing.

The Infernal Pathway is easily 1349’s most complex record yet, but the ferocity of the message remains the primary objective. The Norwegian quartet’s iconoclastic virulence is in no way diminished by this stylistic shift, making this a hugely impressive record. The sound is purely and unmistakably 1349, full of bombast, splendour and hatred.

The frostbitten darkness of “Enter Cold Void Dreaming” is still lit from below by 1349’s signature aural hellfire approach, recalling prior releases.