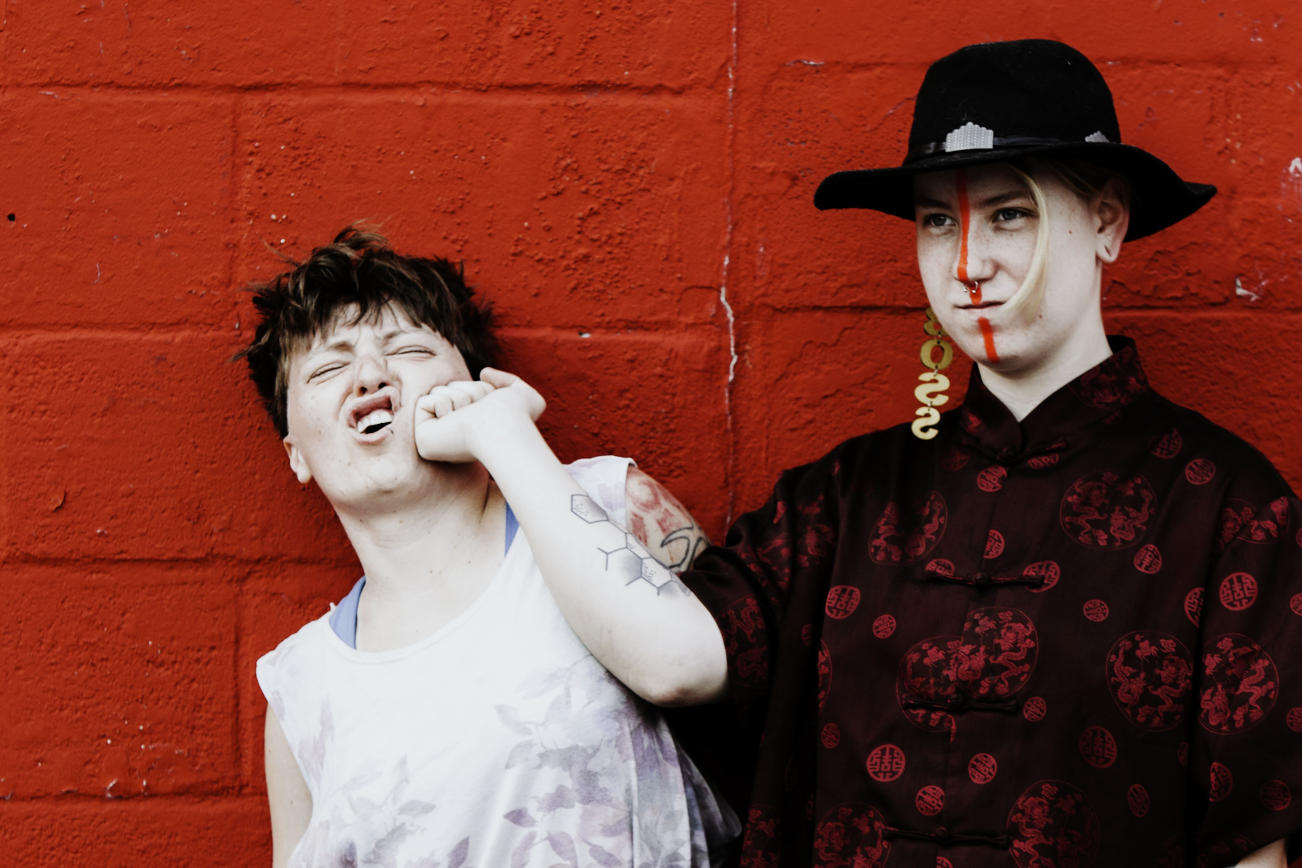 “Kentucky-Fried Queerdos,” GRLwood, as they have called themselves, is a female duo hailing from, you guessed it, Kentucky (Louisville to be specific). Composed of Rëj Forester and Karen Ledford, the two fierce musicians burst onto the local scene exactly two summers ago and, with their unapologetic style, quickly earned themselves a fastidious following. It also doesn’t hurt that they’re difficult to place into a specific musical genre but might be best described by as “scream pop.”

GRLwood released the well-received Daddy last year, before recently announcing their sophomore release, I Sold My Soul To The Devil When I Was 12, which is due out on August 2nd (pre-order now) and features the brand new single “I Hate My Mom.” This highly-relatable anthem will wisk you back to the days when your parents tried to control your every move and you responded by rebelling in any and every possible way. The new album will again deal with themes such as queerness, politics and satire, all of which were introduced on Daddy. As they continue to solidify themselves as a mainstay in punk rock, Forester and Ledford have contributed to the latest installment in our Women of Rock series.

“I Hate My Mom” is the duo’s newest single. Does anyone actually really hate their mom?

– Hole’s debut album, Pretty On The Inside, goes sooooo fucking hard. Every time I listen to it I am filled with rage in the best possible way. Its raw power and brutally honest lyrics have always been an inspiration. Kim Gordon of Sonic Youth produced it too which makes it even better. (Karen Ledford)

“Malibu” is only one of many classic hits from Hole:

– She has so many hits that it’s hard to even make a short list of all your favorite songs. Rihanna has such a distinct sound and style that is instantly recognizable. Everything she touches turns to gold. (Karen Ledford)

– I’ve always connected with her because both of us were told that “drums are for boys” when we were young and in school bands. Knowing that she went through that same struggle growing up has always me very fond of her. She was an amazing drummer and singer. Listen to “Tunic (Song for Karen)” by Sonic Youth for a nice tribute to her. (Karen Ledford)

Don’t we all just hate “Rainy Days and Mondays?” Here’s the music video of The Carpenters talking about just that:

– Missy Elliott was one of the first artists that I heard and felt really empowered by. There is just something so special about her energy. As a kid (and now) it was just so incredible hearing this super fierce and “not traditional/typical femme” vocalist. She was raw, fast and packed a wicked punch unlike any other I ever heard. (Rëj Forester)

I think we all hate “The Rain” also. Check out this classic music video from Missy Elliott off Supa Dupa Fly:

– The first time I saw Against Me! live as a teenager, I knew something was very special about it, but I couldn’t quite put my finger on it. Something more than teen angst, smashing the state and believing in love. A different kind of being yourself. They absolutely inspired me as a youngin’ and I thought to myself that I will be the one on stage soon. (Rëj Forester)

Watch the very black and white music video for Against Me!’s “Black Me Out:”

In support of Man Man:

GRLwood’s sophomore record I Sold My Soul To The Devil When I Was 12 will be released on August 2nd. Check out the album cover art: 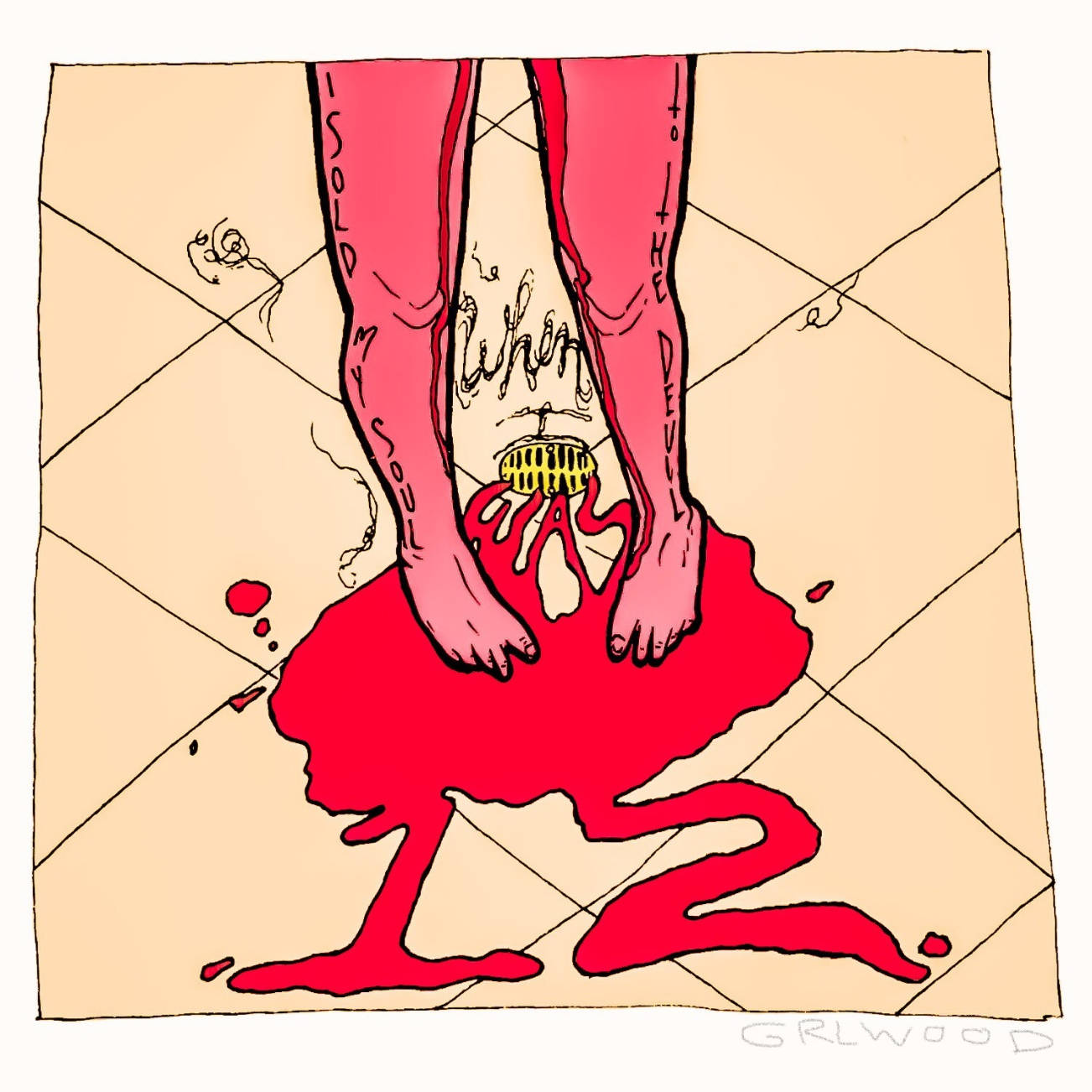