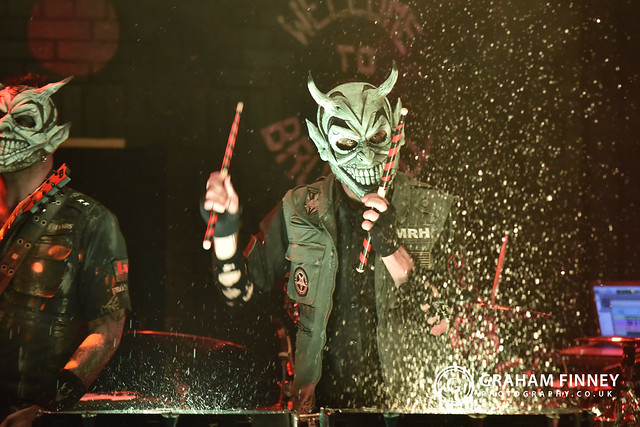 You’d think it would be tough being Mushroomhead given that their immergence on to the metal scene came a few years after nine masked lunatics from Iowa became the biggest modern metal band around. But, to give them their dues, here at the Brudenell Social Club in Leeds, the Cleveland-based band look like they’re still loving every minute of the mayhem they’re creating on stage.

Playing to a decent sized crowd, the masked band make the most of the confined space by clambering all over the multi-drumkit set up while alternating between who is on and off stage to put on something of a spectacular show. With water-filled drumkits positioned at either side of the stage, and for the most part of the set, at least six members of the band on stage at any one time, Mushroomhead certainly had their work cut out tonight. Kitted out in masks that make the band look like extras from one of The Purge movies, the band stomp and bash their way through their brand of nu-metal. Opening with “43”, the band may not have had a plethora of big hits but the masses here know every word to the likes of “Bwomp” and “Qwerty” which the band effortlessly smash out.

Of course it’s hard to ignore the masks but, despite having been accused of ripping off that other masked band, it has to be said that there is something slightly creepy and unnerving about the grinning faces peering out from the stage and, given the prison/boiler suit outfits the band are wearing, it would be a fair assumption to make that, no matter how much this crowd lapped up the nu-metal/rap hybrid the band smashed out, you’d have to be made of tough stuff to hang around in the dark after this gig ended.

Here’s Mushroomhead at their gruesome best in “We Are The Truth”: