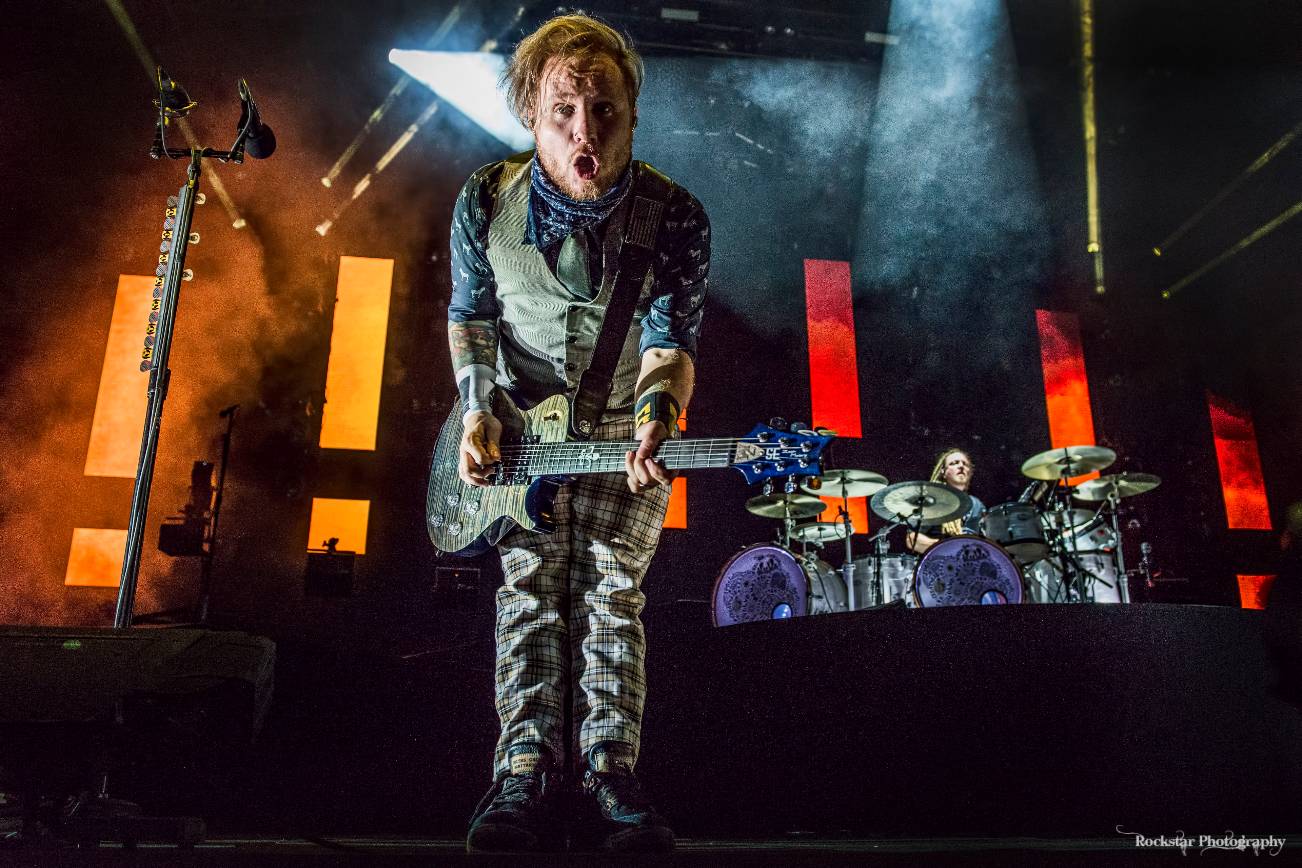 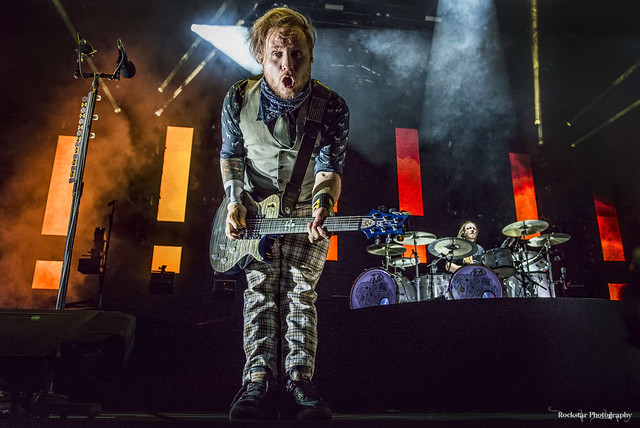 Last Tuesday Toronto fans were treated to a rock n’ roll spectacle! Jacksonville, Florida’s hard rockers Shinedown were in town at RBC Echo Beach along with Badflower, Dinosaur Pile-up and Broken Hands. It was an early start to a hot night of great music! With doors opening at 5:30 pm, it was cool watching the steady stream of fans flowing into Echo Beach. As the evening progressed more than 4,000 people looking for their Shinedown fix were proudly displaying their new “My Monsters Are Real” Tour shirts.

About an hour and a half, after doors opened, English rockers Broken Hands were the first act to grace the stage. Considering the sun was still glaring madly down onto the stage, singer Dale Norton, lead guitaritst Jamie Darby, bassist Thomas Ford, drummer Callum Norton, and guitarist/keyboardist David Hardstone played a solid set, and did what they were supposed to do; set the mood for what was to come. The band’s first three songs included “Split In Two,” “Light Up,” and “Can You Feel It.”

Next up was Dinosaur Pile-Up. The English three-piece packed quite a punch, with a really meaty grungy sound. Singer/guitarist Matt Bigland, drummer Mike Sheils, and bassist James Cratchley looked as though they were having a great time playing to a really appreciative crowd. Their first three songs were “Arizona Waiting,” “Round The Bend,” and “Celebrity Mansions,” the title track to their latest studio album.

By the time the next intermission arrived, I was wishing that I’d brought another shirt to change into. To say it was tropically steamy would be the best way to describe what it felt like. My eyes scoured the length of food trucks, bars, and merch booths stretched as far as you could see. And then I saw it! The Mr. Freeze truck! I beelined it to him, parched, half blind from the amount of sweat dripping in my eyes. “One large strawberry shake please, and I guess I should get some water just to stay hydrated.” Walking back to the stage already a happy camper with my shake, I happened to come across a taco food truck… Holy shit! This is too good to be true. Jerk chicken tacos, a little bit pricey at 12 dollars but damn they were good! I don’t know what I did in a previous life, but on this day Karma, God, and whoever else was up there were smiling down on me.

Breaks over and it’s time for the third band of the night. Los Angeles rockers Badflower brought an energy level that was through the roof. This band welcomed any stragglers and late arrivals to the party. Singer/guitarist Josh Katz at one point in the set dropped to his back on the stage floor and just starts wailing on his guitar, while bassist Joey Morrow was all over the stage having the time of his life and seemingly oblivious to anything around him. Guitarist Alex Espiritu dropped his cap, and then came soooo close to flipping it back onto his head with his foot. All the time killing it on guitar. Drummer Anthony Sonetti was the heartbeat of the band, and never missed a beat. It was a great set of high energy rock. Badflower’s first three songs were “xANAx,” “Drop Dead,” and “White Noise.”

It was getting dark at this point, and you can feel the atmosphere start to change. The air felt almost electric, from the excitement and exuberance of everyone now, as chants for Shinedown began to get louder. The stage was covered with a giant white drop curtain so that all you could see are the silhouettes as the band emerged onto the stage.

The curtain dropped and Shinedown appeared dressed in suits! What a class act. The night’s set began with the hit song “Devil,” and as the man says in the song “It’s About To Get Heavy!” As I’m sure you can imagine, it did get heavy. On cue as soon as he sang that line, the stage erupted in deafening pyro cannons spewing flames up to the ceiling. Now, this is turning into a rock show!

With almost 20 years and six records under their belt, Shinedown have really evolved into world-class musicians as well as real “showmen.” This was one of the most entertaining, explosive, and enjoyable sets of music that I’ve seen in a while. Frontman Brent Smith even took the time to shake each photographer’s hand. I thought that was really impressive, and not something we experience very often as an audience member.

The entire band was very engaging with fans to everyone’s delight, and it made the whole concert experience a little more personal for everyone. Part of the way through their set, Shinedown went out into the audience where there were four smaller impromptu stages set up. They played the next four songs with and amongst their fans, before finishing off the show back on the main stage with some more fan favourites.

Tonight was one of those concerts where you’re leaving and think damn! That was a wicked show!

Shinedown’s latest single and music video off of Attention Attention is the rousing arena rocker “Monsters:” 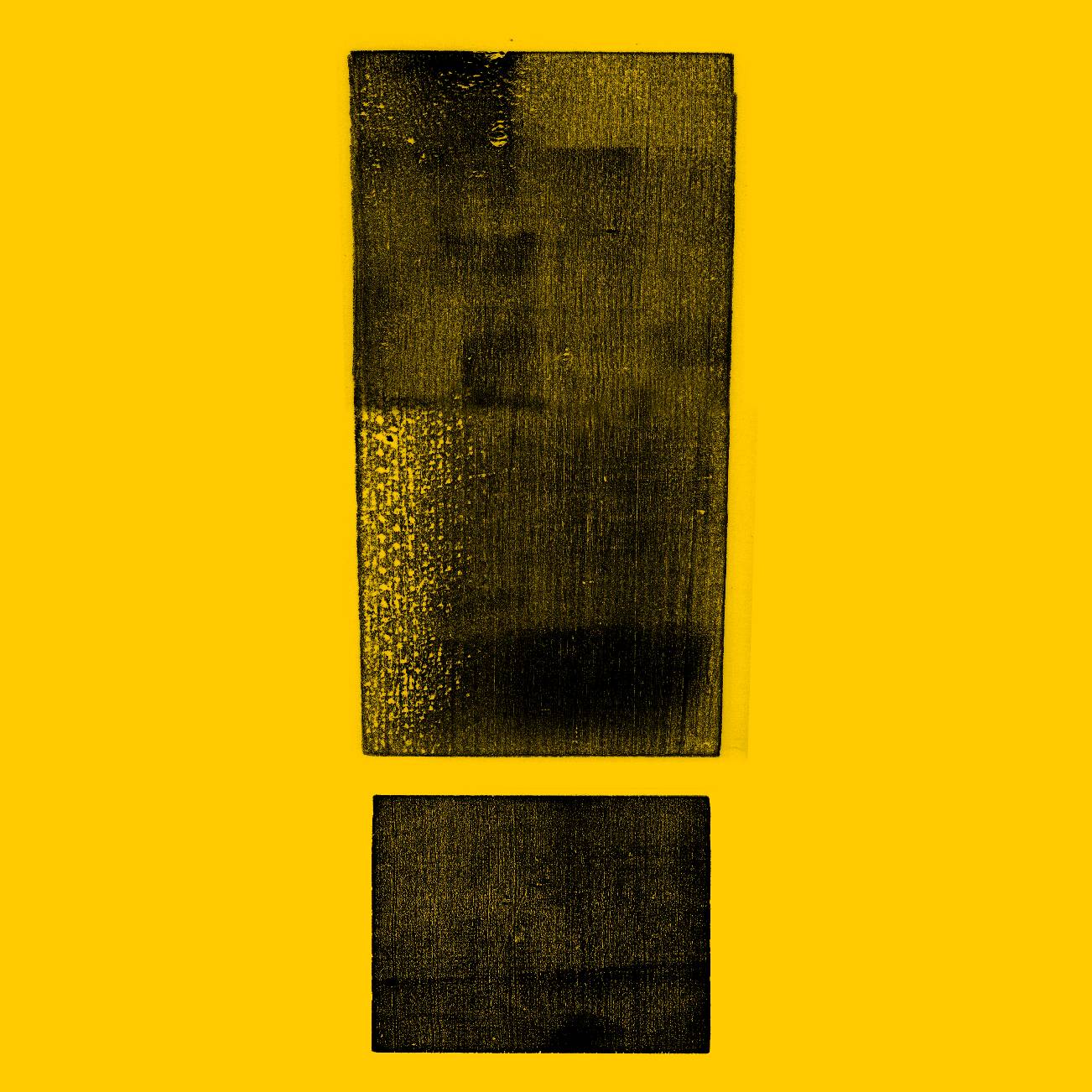