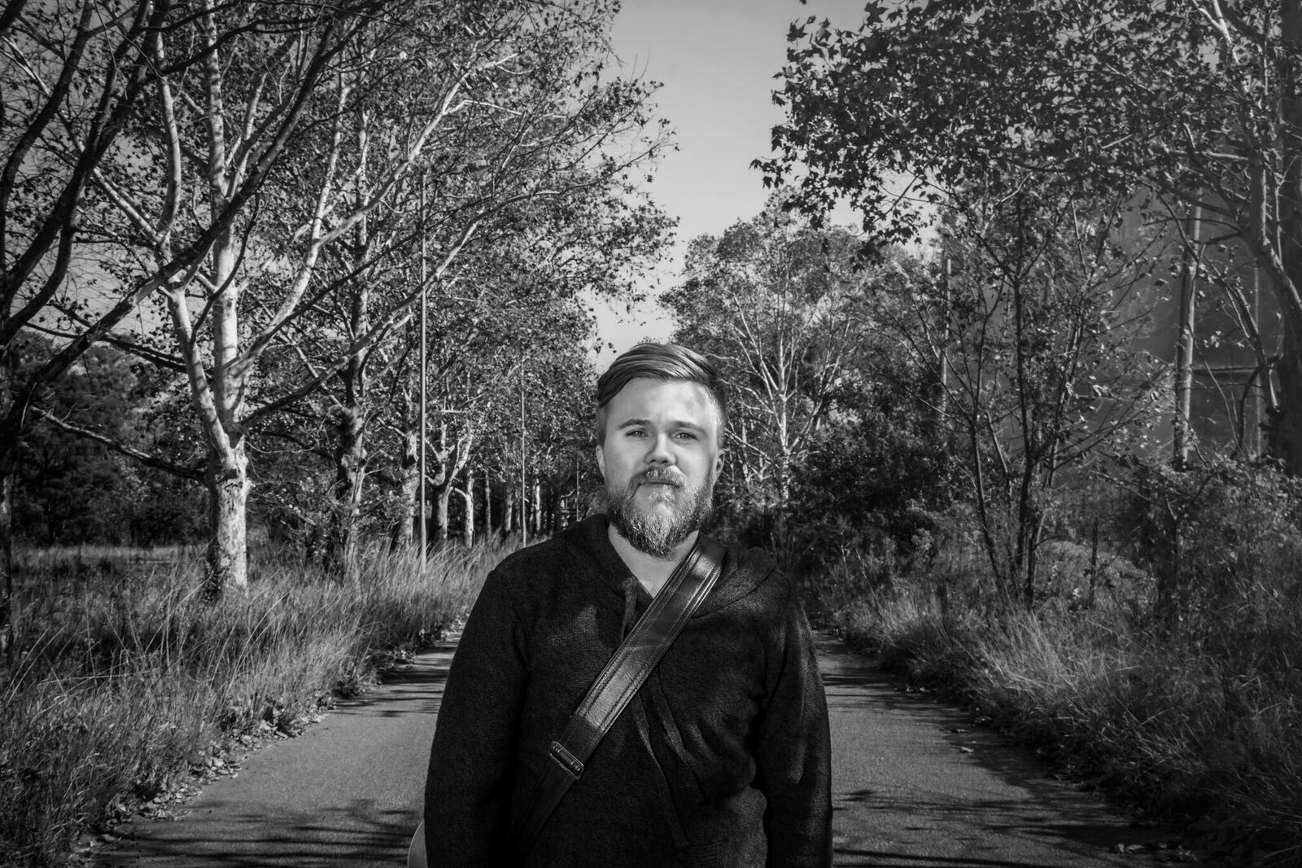 South Africa’s favourite heavy band Red Helen is no stranger to the music scene. However, the band’s bassist Greg Van Kerkhof is a new-ish voice and has a new side-project too! We caught up with Greg to find out more about the differences between playing in a metal band and making acoustic music, a car accident that led him down a very different and interesting path, and what direction he sees his solo music headed over the next few years. You can purchase Greg’s brand new single, “Never Again,” now through his official BandCamp page.

Let’s take it back a bit. You’re in Red Helen which is quite a heavy band but you’ve got your solo project too, which is acoustic. Why and how did the solo project come about?
Greg Van Kerkhof: I’ve always had a love for many different genres of music. Different styles allow me to express different emotions and vibes. Metal is great for expressing things like anger, aggression, power, and energy, but acoustic music has a certain vulnerability that’s great for storytelling. It’s easy to get fixated with one style of music, but I try to absorb influence from as many different places as possible. I’ve actually been playing acoustic guitar longer than I’ve been playing bass! I guess my acoustic music came from wanting to explore my role as a singer, songwriter, and guitarist. I love playing metal, but the experiences I have playing these different genres are completely different and offer their own challenges and rewards.

The car accident, are you able to delve into details for our readers? If so, what transpired that day and how did that change you as an individual?
Van Kerkhof: I’d rather not delve into too many details if that’s ok? But I’d like to answer the second half of that question. The accident changed me in many ways. I lost all confidence in my ability to direct my life. It happened so quickly and with such seeming randomness, that for a while I became terrified about how little control I had. If I had left five seconds earlier or later, or taken a different route, that night would have ended completely differently. The realization of how blind we are to the future really did my head in. I’ve always had a strong sense of morality and a will to harm nobody. I try to get by kind as much as possible, I follow a plant-based diet to avoid killing animals… I even go out of my way not to kill mosquitoes.

So the fact that my good intentions to lead a positive, harmless life brought to me to a point where I played a part in a man’s death shook me to the core. I felt profoundly guilty and ashamed. Looking back, I know that it wasn’t my fault, but at the time it didn’t matter. I lost my sense of who I was, I felt like maybe it would have been better if hadn’t been born at all. I had to rebuild myself with the help of family, trauma counseling and music.

The life-altering experience propelled you to dig deep. How difficult was it for you to pen “Never Again” and was the songwriting able to heal any emotional scars?
Van Kerkhof: “Never Again” was painful but easy to write. I sat down a couple of days after the accident, turned on my voice recorder and poured out what became the first verse and chorus. Over the next couple of weeks, I fleshed it out, adding more and more while I processed the grief, shame, and anger I was feeling. For most of the songwriting process, I felt that my life was now a dark mess that I might never recover from. But with the help of an amazing therapist and the love of my family, I started to believe that things could be good again.

So I wrote the bridge and final verse as a promise to myself that I would do whatever I could to heal, and that I would find the light again that had seemingly disappeared. I decided that I would use the suffering that life had brought on me and use it as fuel for growth. I wouldn’t necessarily say that writing “Never Again” healed the scars. It was more like cutting out the rot so that time and love could heal them. 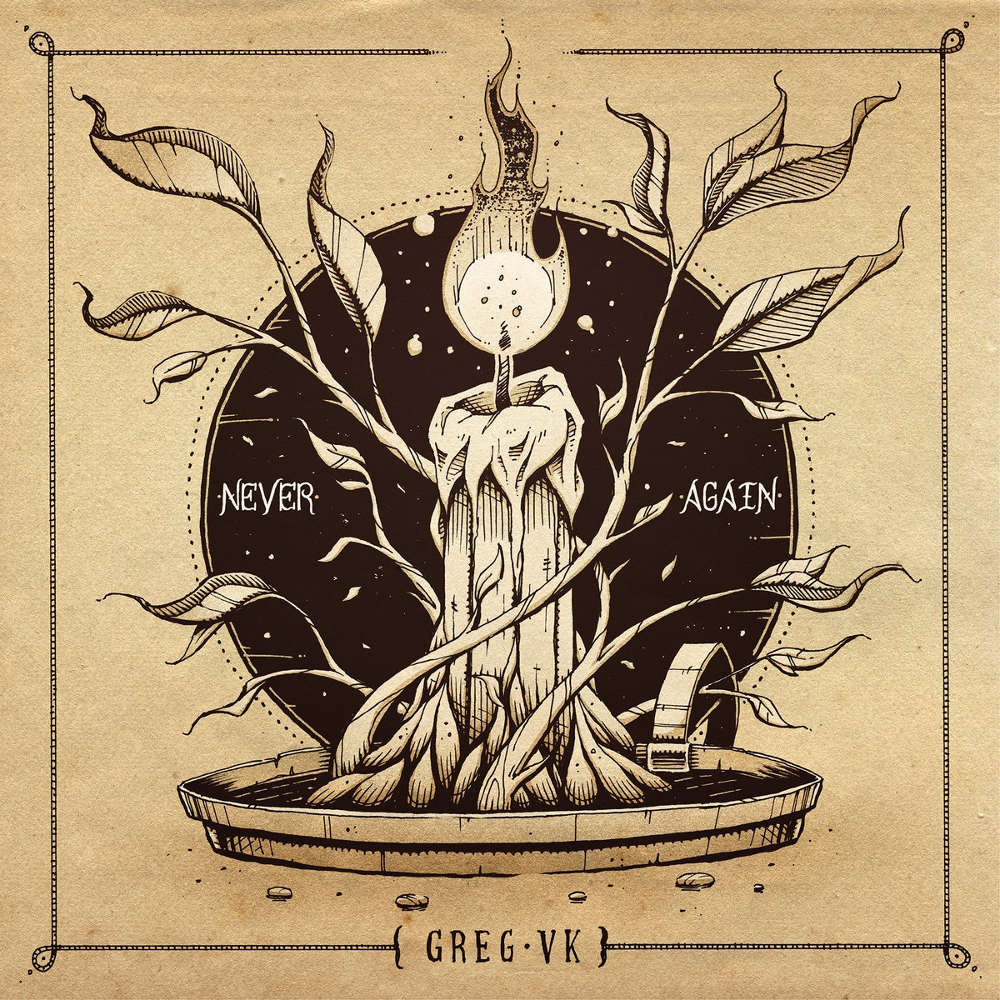 Speaking of emotions, several of your songs are quite heartfelt and strong in lyrics. Where do you get your material from and do you have any specific writing processes?
Van Kerkhof: Thank you! I take influence from all kinds of things in life. I find it incredibly difficult to express things like pain and depression in normal conversation. But I crave connection and use songwriting to share parts of me that nobody would know, otherwise. I’ve written a bunch of love songs for my fiance because she makes my life a much happier place to be. I also write a lot about death. Maybe that’s my metal influence coming through! I use the songwriting process to reflect on my own existence and mind. I’m trying to learn about myself when I’m writing. Trying to clarify my thoughts and feelings and put them into a more tangible form. In our culture, we tend to shy away from thinking about death, but I try to face it in myself as much as possible.

My songwriting process differs depending on the song. But most of the time, I write the instrumentals and lyrics separately and then try to stick them together. Usually one will inspire the other. For example, my song “Pyramid Scheme” was inspired by feelings of shame as a human, because of how we treat others and those that we deem to be lower life forms than us. I wrote the first draft of the lyrics, which then inspired the melancholy guitar lines that back up the song. What I often find really interesting is writing an instrumental first and seeing what ideas jump out from the song.

What’s it like working with Audio Militia and fellow Red Helen mates on a totally different project?
Van Kerkhof: Brandon Pratt (Red Helen vocalist) is one of my best friends and an inspiring human to work with. He’s actually recorded every acoustic song I’ve ever released and even a few unreleased songs that didn’t make the cut. He’s a passionate engineer and producer and always manages to capture the sound I’m looking for. All of the songs I’ve released have been recorded live in studio.

In Red Helen we spend hours tracking each instrument, making sure everything is perfect. For my solo music, I enjoy releasing music that is live and therefore imperfect. The whole point of my music is to express the real me with all my flaws, so live recordings are better for expressing my imperfections as a musician and as a human. So yeah, the process is completely different, but really rewarding in its own way.

Where do you see your solo project going in the next few years?
Van Kerkhof: I want to release as much music as possible. I really struggle with the curse of being a perfectionist. Nothing I make ever seems good enough for me. In one way, that’s great because it pushes me to work harder and improve, but on the other hand, it slows me down and stops me from releasing as much as I’d like. I’m trying to overcome that part of myself and I plan on making and releasing as much music as possible. In the next few years, I want to take my songs to as many people as possible and find the ones that really resonate with what I have to say.

I have no idea where my career is headed, but I know I’m going to keep working at my songs and myself so that I can actualize all the potential I know I have. I have a long way to go, but my goal is to create the best work that I can.

From the live Sleepwalker Sessions, here’s another video of Greg performing “Hand in Hand:”