OUR LADY PEACE Bassist DUNCAN COUTTS on Touring with +LIVE+ and BUSH, Upcoming New Music, and the TRAILER PARK BOYS

This summer Our Lady Peace is on the road supporting Bush and +LIVE+ on a massive North American tour, The ALT-imate Tour. Launched earlier this month at Foxwoods Resort Casino in Connecticut, the three popular rock bands are scheduled to be on the road together through mid-September.

In addition to these support dates on The ALT-imate Tour, Our Lady Peace — comprised of Raine Maida, Duncan Coutts, Steve Mazur and Jason Pierce — will then headline multiple tour dates in their native Canada via their signature festival Summersault, also with Bush and +LIVE+, but with the headline roles reversed. The Summersault Festival was first launched by Our Lady Peace in 1998 and included performances from Our Lady Peace, Moist, I Mother Earth, Sloan, Esthero and Treble Charger at Molson Park in Barrie, Ontario to over 35,000 fans. In 2000, Summersault returned with a national tour the included performances from Our Lady Peace, The Smashing Pumpkins, Foo Fighters, and A Perfect Circle.

With over five million albums sold worldwide and multiple Juno and Much Music Video Awards to speak of, Our Lady Peace is one of Canada’s most successful rock bands ever. Coming to prominence in the alternative music scene in the 1990s, OLP earned several platinum albums in both the United States and Canada. Known for such hits as “Clumsy,” “Somewhere Out There” and “Superman’s Dead,” the band has been a consistent player on the world stage with constant touring. In turn, Our Lady Peace has had continued success releasing albums throughout the past few decades.

I had the pleasure of speaking with Our Lady Peace bassist Duncan Coutts by phone in the midst of the ALT-imate Tour. Highlights from that chat are below. In the meantime, more on Our Lady Peace’s latest album, Somethingness, can be found here.

I first want to ask you about the tour with Live and Bush. Had you known the guys from either of those bands before confirming the tour?
Duncan Coutts: I wouldn’t say that as much as we had done at least one show with each band before, but we didn’t have a relationship, per se, before that. But you know it was a good fit and it is our pleasure to be out with these guys. They’re both great bands.

When you are on this tour obviously you’re playing to American audiences that are familiar with the radio hits, yet Our Lady Peace has been consistently successful for about 25 years now. So how does the setlist on one of these shows compared to what you’d usually do in a headlining show?
Coutts: Well it’s hard to choose, right? That’s the thing… It’s just to pare it down, and we’re sort of muscling in seven songs if you will and that’s all the time we have. It’s just really hard… There are certain songs that people really expect to hear… I just literally finished soundcheck when you called and we’re trying to work up a new song… So it’s really hard to choose.

I understand that there’s a couple of dates on the tour where you guys are headlining instead.
Coutts: Oh that’s later, that’s in September. We used to have a festival that we branded 20 years ago called Summersault and we’re bringing that back, and +LIVE+ and Bush are going to join us on that as well as a couple of other artists from Canada. One called Dear Rouge and a DJ called Human Kebob who’s awesome. Yes, we will be headlining those and then we will get to spread our wings a little bit — for lack of a better analogy — and play a lot of songs.

I love the versatility of your band and that you’re a festival headliner in some territories, and you have to do “the first of three” in other territories. Is that an ego-check kind of thing? Does that ever bother you? Or are you just the kind of guy that’s happy to be earning a living playing music?
Coutts: You know, it’s weird. I wouldn’t call it “happy to be earning a living.” I kind of don’t look at it that way. I mean, I guess you have to in a way. But really when you’re fortunate enough that the people want to hear you and music is your life, I mean the reason that all of us are into this is because we’re big music fans and music has played such a big part in our lives individually. To be able to continue to play and turn on audiences is the greatest gift in the world. So whether it be as an opener or a headliner it really doesn’t matter. Those 35 minutes on-stage or two hours on-stage are the best of my day.

The band’s latest album Somethingness was released on February 23, 2018, via Warner Music Records: 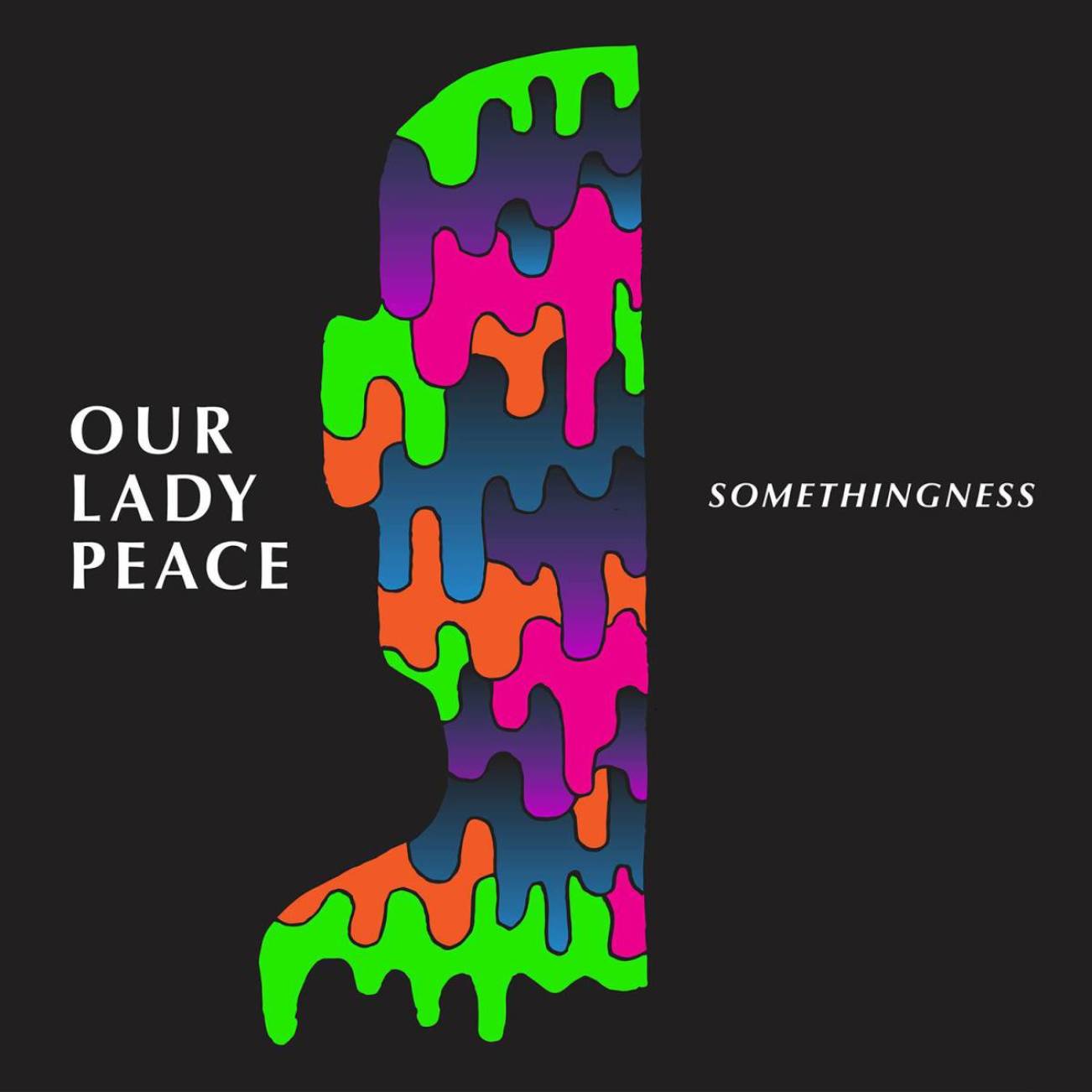 Not a ton is known about you beyond the stage. Could you tell me a little more about yourself? Do you record music on your own? Do you have solo projects?
Coutts: That’s the beauty of living in a curated world and no one really knowing, kind of, that I’m a little old-school that way. I have to say I think there should be far more mystery in people’s lives than what plays out on Instagram or Facebook and all of that stuff. But yeah, I work with a lot of young artists and produce and co-write and do that at home. I’m always active musically.

Wikipedia also talks about how you’re a multi-instrumentalist. I believe it says that you play banjo as well…
Coutts: Well no, that’s a stretch. I will put it this way. I’m so not afraid of failing in public that I am a danger to myself in the sense that I will pick up any instrument and sometimes succeed and sometimes fall flat on my face.

Will we ever see a solo album from you personally?
Coutts: I doubt it. You don’t want to hear me sing…

Before you mentioned that you were trying out a new song in soundcheck. Does that mean another record is already being made in the production phases now?
Coutts: I wouldn’t call it the “production phases.” I would call it pre-production. We probably have seven-ish, maybe nine songs, that are in various states ready to go. This is, for lack of a better term, one has really been demoed up in pure form. That’s the one we’re playing live. But we’re looking for a new release next year. It’s the 25th anniversary of a record of ours that was sort of a critically-acclaimed, Spiritual Machines, and we’re looking back to that and releasing something new maybe with a little bent towards Spiritual Machines. We’ve probably had 20 ideas, of which maybe seven or between seven and nine are in contention for it at this point. 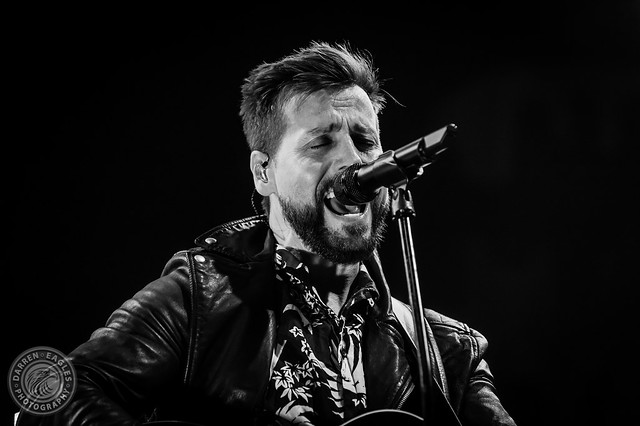 Beyond that, before you mentioned your own festival and a lot of bands rather than doing their own festival they do a cruise. Have you ever thought about turning into Our Lady Peace cruise?
Coutts: You know, I’m not a big fan of cruises I have to tell you, so probably not.

And then if you look at the other trajectory of things that bands who have a huge legacy like yours do there is the inevitable documentary that pulls the curtain back. Have you guys thought about doing one of those as well?
Coutts: We have talked about it but I don’t know… If there’s an interesting back-story, I don’t know one. No one’s passed out in a ditch in our crew, so I don’t know… But we’ve documented a lot of stuff so there could be. If the storyline is interesting enough then we’ll do it. We recorded something many many years ago. Did you ever hear of a show called Trailer Park Boys?

Absolutely, yes.
Coutts: Yeah. So we actually took the Trailer Park Boys on tour with us many many years ago and we actually filmed a documentary called Fear Of The Trailer Park and it’s never been put together. So that might see the light of day someday.

But going back to what you said about how nobody’s woken up in a ditch in Our Lady Peace, the general public perception is “Those are nice guys that appreciate what they do.” Is really that’s what’s going on? You guys still like each other all these years later?
Coutts: Well you know, it’s just we’re like brothers for better and for worse… We love each other and we also fight.

A trailer for this summer’s ALT-imate TOUR: