In the annals and ongoing history of organized crime, the Yakuza is the most well-known, (in)famous, deadly, feared, respected and whatever dichotomous and disparate adjectives you care to employ to emerge from Japan’s underworld. Depicted in Western media as a violently psychopathic gathering of social outcasts, the Japanese mafia actually provides structure, discipline and a rarely unyielding honour code to men young and old who never had nothin’ growing up.

But don’t let the snazzy suits, flashy jewellery, sports cars, and coiffed hair fool you: underneath it all is a violent psychopathology that has contributed to the stranglehold the gang has on culture and profile. The other part of the Yakuza’s infamy comes at the hand of the appearance of its members. Often depicted as sharp-dressed men, members are also known for covering their bodies in extensive tattoos and ink art that reference their history, respect for culture, and its applications to the gang’s philosophy and lifestyle.

Andreas Johansson is a religious studies scholar and photographer and for his new book, Yakuza Tattoo, he was invited into the shadowy underworld of the Yakuza, embedded with one of the organization’s higher-ups and allowed to photographically chronicle the symbolic tattoos of its members.

For a Swedish national like Johansson, being embedded alongside the Yakuza and given the access he was granted is unprecedented (especially, as he explains, a gang war was erupting around him!) as is the resulting photo book which examines the significance of the tattoo not just in the world of organized crime, but in Japanese culture as a whole. We were offered the opportunity to speak to Johansson about his unique experience. Yakuza Tattoo is available to order via Swedish publisher Dokument Press and you can also view a brief preview of the book here.

If you’d like to get more familiar with Andreas and his depth of knowledge, here’s a quick television interview he did in April with TRT World News regarding attacks that were occurring in Sri Lanka:

Can you give a bit of an outline of your background studying religions and how that translates into a project photographing Yakuza members’ tattoos and the connection between the two very disparate worlds?
Andreas Johansson: I have always been interested in organized crime. As a historian of religion, I am especially interested in how religious symbols are used in a non-religious context. To give an example, when we go into a church and see the cross, we have an idea of what that means. However, when we see the same cross tattooed on a member (of) a criminal organization, we might think of it differently. I was curious about whether religious and mythological symbols changed their meaning to the people they were tattooed on. That initial idea was the reason I started this project.

What was your impression of the Yakuza before meeting them face-to-face and interacting with the members, especially the boss, Ken-San? Did your belief about what the Yakuza was all about come mainly from the media? How was the reality of your experience different and/or similar to what you thought it would be like going in?
Johansson: Before going to Japan the second time for my major fieldwork, I watched a lot of Yakuza movies and read all books and articles I could find on the topic. Of course, these movies and articles focus on the criminal activities of these organizations, so I was expecting more of a “thug life” experience. But since I was with the members of the highest level in the organization, they really did not get their hands dirty. The bosses have more of a managerial role. During my visit, there was a conflict between the organization I was with and others and people were killed, but I did not notice anything of this and felt as safe as you can feel during a gang war!

What were some of the more surprising things about the Yakuza that you discovered during your time with them?
Johansson: The relaxed environment. I thought my visit would be more formal and strict, but it was actually the opposite; very relaxed and welcoming. This was a surprise. We had a great time, laughing and talking about our cultural differences, etc… Another surprise was their casual dress code. I had an idea that they were supposed to dress in business suits all the time, but they usually dressed in very casual clothing and some even wore hip-hop clothes. This is really not the picture you get when watching movies about the Yakuza.

Some samples Johansson’s photography and images from his book, ‘Yakuza Tattoo:’ 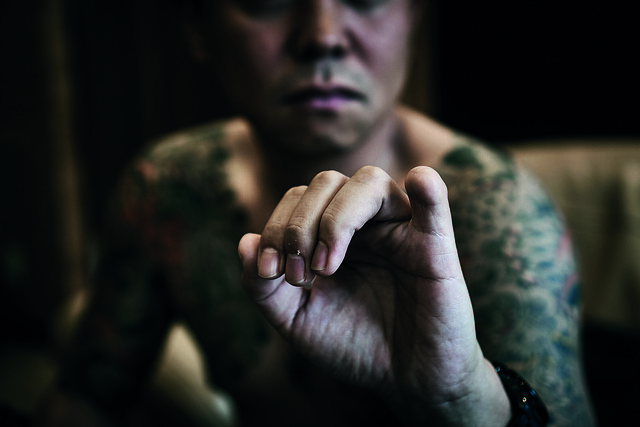 There are points in the book where yakuza members are quoted as saying that the Yakuza isn’t like the mafia and that they’re a lot like the “rob from the rich, give to the poor, fight the oppressor” Robin Hood of old. From your experience, did you get the sense that there’s some misunderstanding about what the Yakuza actually are and how they are perceived in Japan? Did you ever get the chance to see what it is the Yakuza actually do?
Johansson: No, in general people in Japan are really scared of the Yakuza. The Yakuza are and are seen as the mafia. Me and the boss talked about this a lot, even though the book doesn’t focus on these questions. He knows that the things they do are considered wrong. They live in a parallel society, which has its own laws and this includes giving to the poor. I can’t say to what extent the Yakuza help poor people in Japan, but there are examples when they have helped people in crises and after earthquakes, for example.

In one of the chapters, you mentioned an author who was stabbed for writing a book that placed the Yakuza in an unfavourable light. Was that something you worried about with your book and/or some of the photos? Did you allow Ken-San to see a rough draft of the book or any of the photos to get his approval before going to print?
Johansson: Yes, Ken-San has seen the pictures that I chose for the book. Yes, I was worried; these are very dangerous people who are well-connected throughout the world. But, since I focused on the symbols and really tried to understand these tattoos and not writing about any sensitive matters, like crime or gang wars, there was really no need for them to feel any suspicion towards me. I would say that the raw and unedited pictures really get you close to the subject. This is not a fashion tattoo book with slim and trimmed models. The books’ strength is that it shows the uncooked truth about the Yakuza, even if it is chubby sometimes. (laughs)

View a short clip from The Documentary Channel on the Yakuza boss and the code of honour within the organization:

The impression that I get from your book is that the casual tattoo culture that exists in North America and Europe in which seemingly everyone has some ink on them somewhere hasn’t taken hold in Japan yet. Are tattoos still seen as indicative of being in a gang, a biker or in the navy? Are tattoos becoming more of a common sight in everyday Japan? How does both normal society and the Yakuza react when they see everyday folk sporting tattoos?
Johansson: It is a question of generations. Nowadays, the younger generation seems to have adopted the “western” lifestyle of tattoos and it is very common. But still, you will see places like public baths and gyms that forbid people with tattoos entering their places because of tattoos’ deep connection to the Yakuza. The older Yakuza members see this trend as fashion and not spiritual tattoos as they see their own as.

In many of the interview quotes, the sense I get is that Yakuza members are the outcasts in a very strict society and some of them appear to become outsiders at an early age. But I also felt a strong sense of vulnerability; how many of them came from poorer households or broken families, how those early experiences still resonate with them to this day and how the Yakuza acts as a replacement for what they missed out on growing up. Is this an estimation you would agree or disagree with?
Johansson: I agree and I believe the members of the Yakuza would too. I think this is very common throughout the world. Many of these people have a background in the lower classes of society and if we want these people to stop being attracted to organizations like Yakuza we need to increase their status.

There’s obviously a historical reverence in the Yakuza which can be seen in their tattoo choices. How does the old school react to the new school Yakuza who are susceptible to globalization, in general, and the image of American gang culture, in particular?
Johansson: In the book I mention this in regards to tattooing. Some of the youngsters are doing other types of tattoos, for example, guns. These tattoos are seen as non-traditional and frankly embarrassing for the older generations. 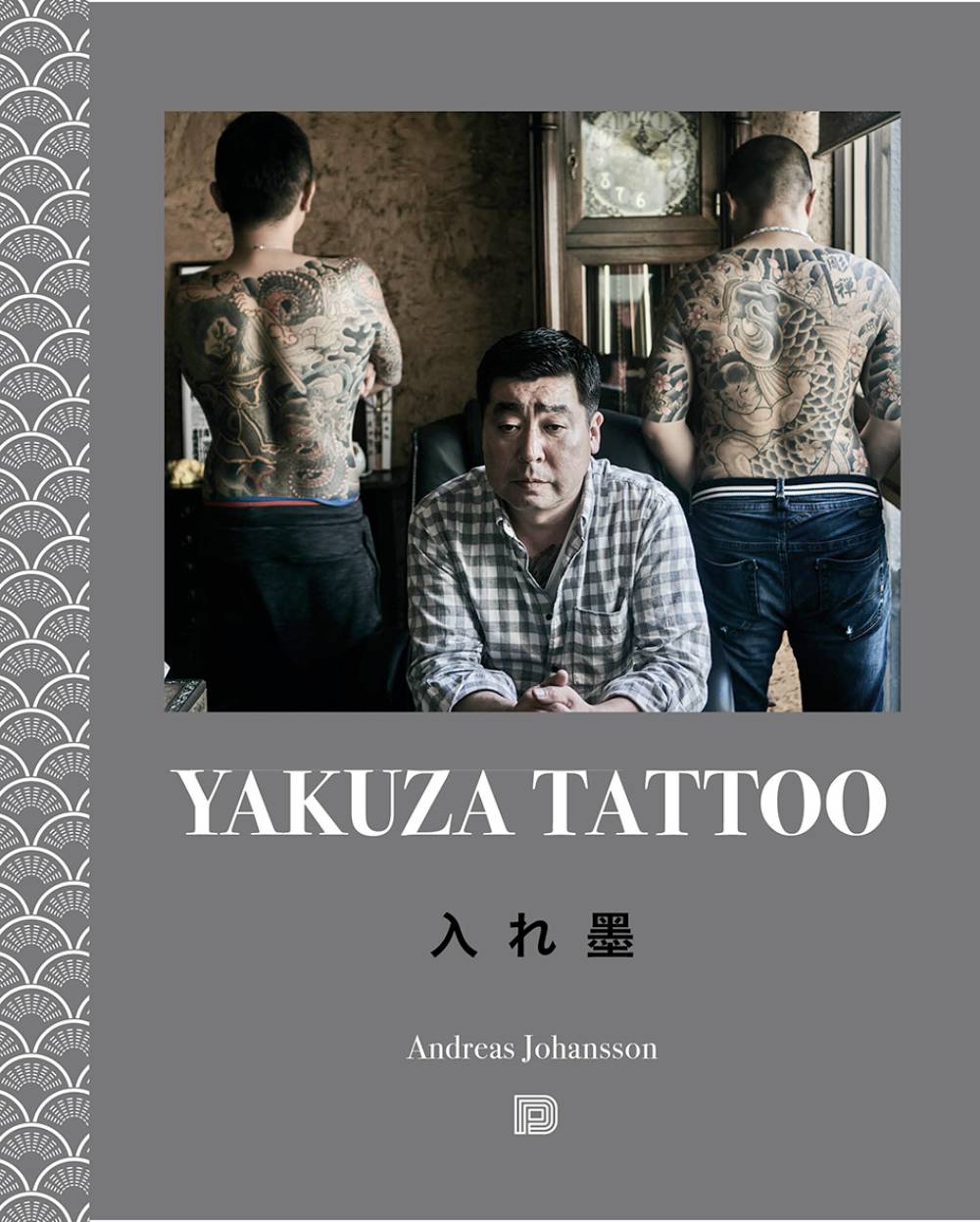 Was it difficult finding a publisher willing to put out your book? Did you have to do a lot of pitching and convincing to get the book into print? What have the reactions been like so far? Have you heard at all from any of your photo subjects about what they think?
Johansson: No, it was not difficult to find a publisher. I have been a lot in the media and talked about the book, it has been fun and people are very curious about the project. I still talk to the boss quite frequently. We talk about everything; we really connected.

Of the total amount of material you had, how much of it made it into the final version of the book? Do you have plans for a gallery exhibition or a second book with the leftover material?
Johansson: Maybe 10 percent. I took a lot of pictures, but I also got a lot of material from the Yakuza, for example, their newspaper and members’ pin. I was told that I was treated as a member of the boss’ family. I have had several exhibitions and some of these have included material that was not part of the book. I have some plans for a second book, but that will be based on new material.

How would you say the experience of chronicling the Yakuza tattoos and doing this book has changed you or your perspectives on the Yakuza, organized crime, tattoos and the respective cultures surrounding these?
Johansson: That is a really good question. Something that I really have thought about after doing this project is that we tend to dehumanize members in organized crime. Perhaps, rightfully so. But there are so many things to be understood about people in organized crime and some of the answers are mediated through their tattoos.