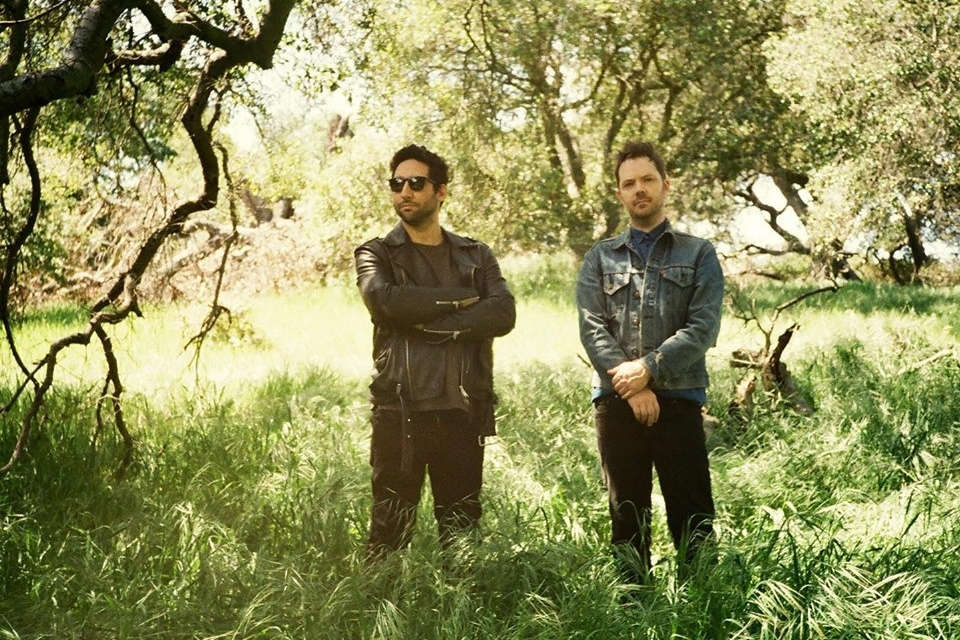 It’s time to take a break from all that metal for something a little more eclectic. Allow us to help you become familiar with Los Angeles and Stockholm-based production duo ROOM8. The production duo of artists/producers Ezra Reich and Nic Jones, has been active for over five years now since the 2014 release of their debut EP Vision of You and since then have established themselves as one of the top production and songwriting duos in cinematic electronic music. They are perhaps best known for their collaborations with Little Boots, The Sound Of Arrows, Morgxn and Electric Youth.

Since establishing themselves, ROOM8 have been about as active as you could possibly be, but now it’s time for more of their own music and the release of their new record Transduction (more of the band’s music can be found here). The album takes its inspiration from the synth-heavy sound of the 1980s to create an expansive, cinematic trip into the world of electronica. With so many film projects and collaborations under their belt with more to come, what better time than to speak with ROOM8’s Ezra Reich about the duo’s new record Transduction, their venture into the world of film and the cinematic quality of their music.

It’s been five years since the release of your debut EP Vision of You. I hate to ask the same clichéd question, but how did you both initially meet and start collaborating?
Ezra Reich: We both came from various band backgrounds. We met in Los Angeles in 2008 and played a benefit for The David Lynch Foundation (David’s organization for promoting Transcendental Meditation) with songs from an old project of Ezra’s. We quickly found that we loved all the same films and music and around 2011, we got the idea to start an electronic project based around our love of old analog synthesizers and the many forms of music they have been famous for.

Released a couple of years ago, “Just You & I” is a perfect introduction to ROOM8’s heavy electronic vibe.

ROOM8 creates some pretty amazing music that you could say in its simplest form is electronic, but there is also this whole cinematic quality as well. How would you describe your music or your ‘sound?’
Reich: Thank you for saying that. We would describe it as cinematic. I think we both feel and experience music in a visual way. That has led us, more and more, into scoring films. We have done a bunch of shorts and recently completed our first feature, a dark socio-political character study called Cuck, which was recently acquired by (film company) Gravitas and will be hitting theaters October 4th of this year.

The last five years has all led to the release of ROOM8’s highly anticipated new album Transduction, an expansive and immersive listening experience that takes you into the world of cinematic electronic music. How would you describe this album to new listeners or people who haven’t yet heard of ROOM8?
Reich: Our upcoming Transduction album was originally conceived as a film soundtrack encompassing songs and instrumentals and we still feel that way about it. We would love to eventually make an animated film around its compositions and we see a story to it in our minds.

Transduction is due for release on October 12th, so to get people hyped up about it, who are some of the people you collaborated with to create this record?
Reich: We collaborated with a few musical friends. Mavrick is a great singer from Stockholm who sang the vocals for “West.” They were originally tracked with a vocoder. Our next single from the album, “Only You,” features the vocals of our friend Stefan Storm from The Sound of Arrows. We worked before with Stefan on our song “Just You & I” from 2017. “Only You” also had a writing contribution from Evan Slamka, known for his work with indie band, Marjorie Fair. Our live vocalist, Jesika Miller sang lead on “Jasmine Night” and “Never Alone” and backup on a few more. Richie Zito, famous for his work on all of Giorgio Moroder’s ’80s albums played some additional guitars on “Little Things.” Ian Young who has worked with M83 quite a bit contributed some saxophone. The rest of the writing, recording, playing, programming and mixing was all Nic and me with a vast array of electronic instruments, guitars, piano, drums etc…

Speaking of Mavrick, here’s the audio for the song “West” which he contributed guest vocals to.

I must ask about the recording process and how you approached that with the making of Transduction. You’re quoted as saying no computer instruments or plugins were used in the making of the album. With how your music sounds, I am floored as to how you pulled this off? And why the hesitation towards using computer instruments and plugins? Why did you decide to approach recording in this way?
Reich: We feel very strongly from experience that hardware synthesizers have a weight and depth of sound that the computer emulations cannot touch. Some of that is due to the tuning irregularities and old oscillator and filter chips in the case of analog, where you are converting raw electricity into sound. Some of it is based on old math and algorithms which had to be done differently to modern digital in the case of old digital instruments like the DX7 or Synclavier or even an old digital reverb like the Lexicon 224x. Mixing “outside the box” is much more time consuming than “inside the box” as every single track of every song was run through hardware equipment, some compressors, and then various old reverb and FX boxes such as the AMS RMX, Eventide H3000, and Lexicon 224x. But we feel that the three dimensionality and weight of the final product is more than worth it. People have come to accept cold flat sounding mixes with sterile computer emulation instruments that are too clean and sound thin. Would you prefer to drive a great automobile or content yourself with video game driving emulations? If you want to arrive at a destination the real car is necessary.

You are both a duo who writes and releases your own albums/music, but you also produce scores to films. What was your initial intention for ROOM8? To be a traditional, touring musical project or were you initially focused on entering the world of scoring?
Reich: We have always thought of ROOM8 as anything but traditional. We have played many shows over the years but our great love is in the studio. We have always been interested in gearing ourselves towards scoring and even our songs are always thought about in cinematic ways. In truth, we love it all though. Our main goal is to be successful being as eclectic and true to our vision as possible while complementing other peoples visions and art.

There’s nothing better than a sunset on a spacey looking mountain. Check out the artwork for the single “West.” 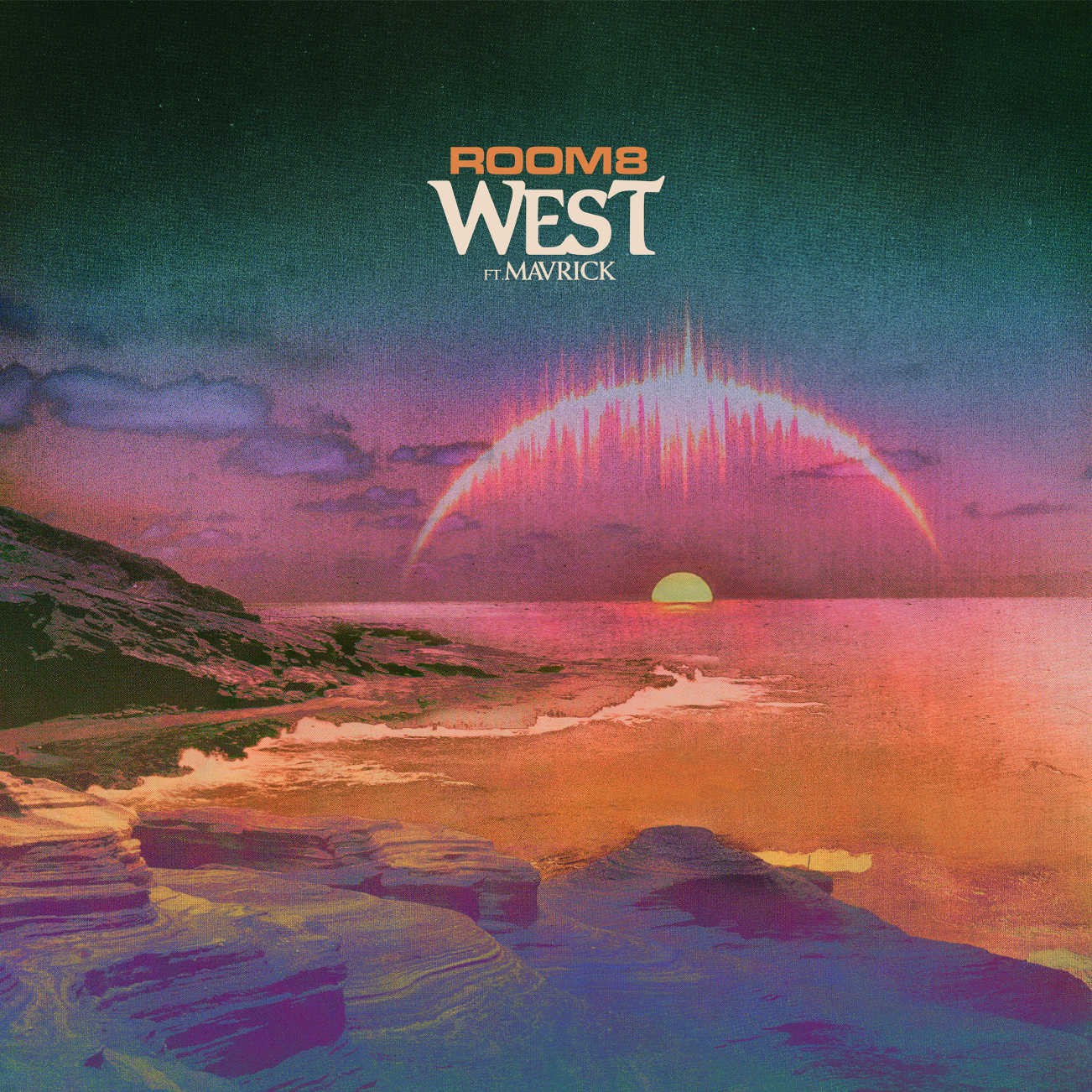 How do you balance your own music with film work? Are you both pretty much in a recording studio every day?
Reich: We are always working on something. Whether that is our music, other people’s music, or a film. We both have studios with many instruments and any day spent in them is always a good day.

With Transduction not due out until October, what do you plan to work on for the rest of the summer? I’m sure you’ve got some projects in the works.
Reich: As independent artists, a lot of work goes into the album release, so a lot of our summer goes into the business of releasing Transduction. Other than that we have several short and feature-length film projects upcoming and we are already laying down some demos for a follow-up project to Transduction.

What’s next for ROOM8? Where do you see this project headed in a year, or two years?
Reich: Hopefully scoring many more films and TV shows and also maybe slightly influencing the production sound, attention to sonic detail, and connection to classic melody in modern music. More albums, hopefully, a tour. Wherever the road leads us that aligns with our vision will be good with us.

For some more ROOM8, listen to their dancy collaboration with Morgxn on “Midnight.”