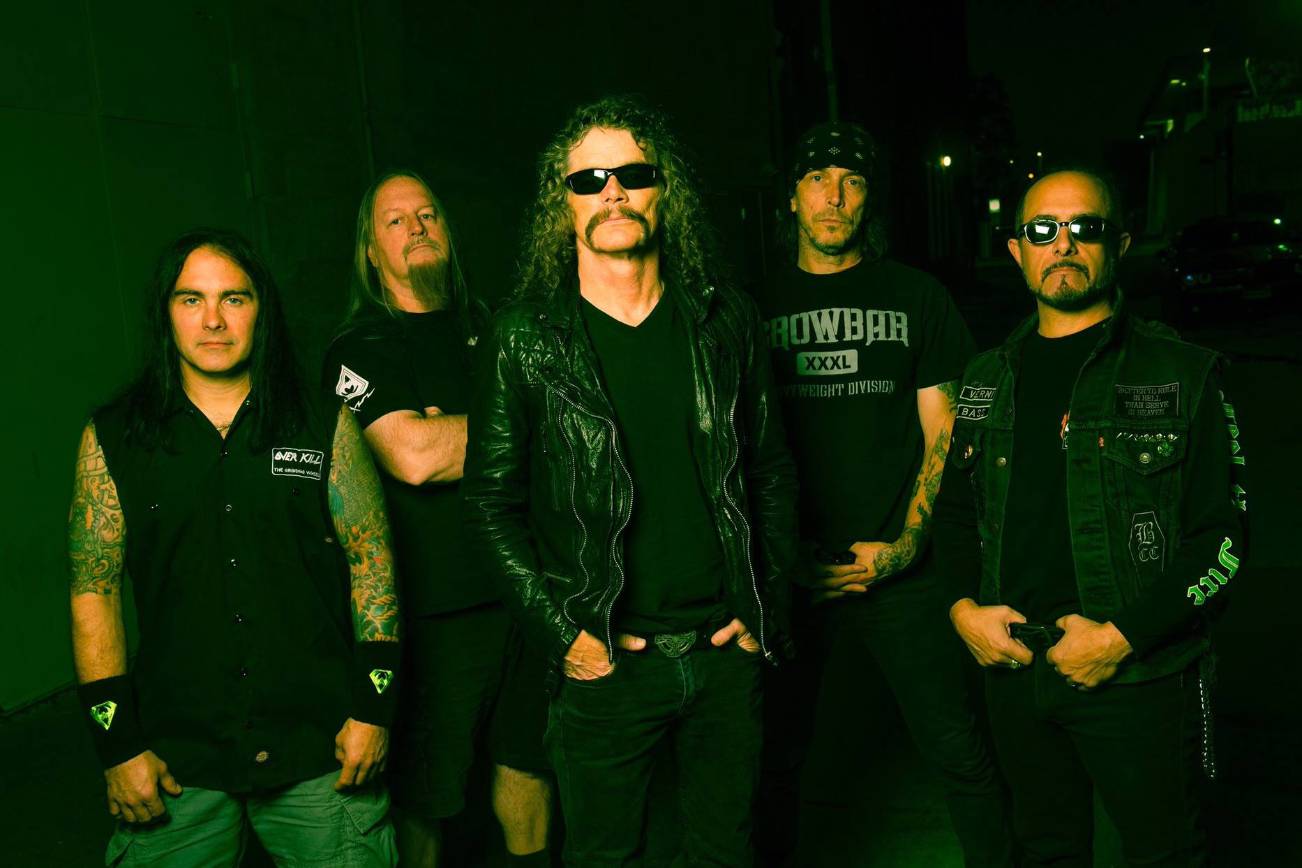 In Conversation with OVERKILL: Bassist CARLO “D.D.” VERNI Discusses ‘Wings of War’ and a Metalhead’s Joy

The above quote comes tumbling from the yap of Overkill bassist Carlo “D.D.” Verni in reference to a variety of themes the band finds itself experiencing these days. On one hand, he’s speaking to the family reunion atmosphere backstage at shows these days, especially at European festivals. Not only are the catering lines and green rooms littered with bands like his own, those that haven’t ever experienced hiatus or dissolution, but the long-in-the-tooth New Jersey thrash ensemble, who haven’t got off the bricks since forming in 1980, also find themselves joined by many reunited bands that have been welcomed back by fans old and new.

“It can be like that,” Verni muses, “but we don’t have much of a relationship with a lot of those bands that were gone for fifteen-plus years and got back together, because they were gone for fifteen years! I remember when Dark Angel came back to do some stuff. We toured with them back in like 1988 or ‘89. We’ve known (drummer) Gene (Hoglan) because he plays with everyone and we see him around here and there, but I hadn’t seen the other guys in like 25 years and didn’t recognize anyone. But, once you get to talking and chatting about this and that and it’s like once a metalhead, always a metalhead. Most metal guys are down-to-earth suburban guys. For people who aren’t into the metal scene, from the outside, it looks nuts! But if you really knew these dudes, they’re just regular dudes. Most of us are parents, some of us are grandparents and the festivals are the most fun because there are so many bands, you see all your friends, people you haven’t seen for a long time and those bands that have gotten back together.”

The newest music video to come off of Overkill’s latest album, Wings of War, is “Welcome To The Garden State.” View it now:

And here’s where “once a metalhead, always a metalhead” becomes decidedly self-referential.

“We played a festival recently and Girlschool was also playing. I loved Girlschool as a kid, so (when they played) I was standing on the side of the stage smiling and laughing and banging and going ‘Oh my god, it’s Girlschool!’ My friends and the other guys in the band were saying, ‘You look like you’re twelve years old,’ and I’m like ‘It’s fucking Girlschool!’ We played another festival not too long ago and I came out of our dressing room and Biff (Byford) from Saxon and Steve Harris were just standing there having a conversation and drinking coffee. I walked past them and was like ‘Oh my god, it’s Steve Harris and Biff Byford!’ That part of you never goes away and it’s cool that the part of you you grew up with is back in front you; it’s like Iron Maiden out one door, Dark Angel out another and us in the middle! It’s fun to be a part of and amazing it’s still going on.”

The Tao of Isolation:

The Wings of War (buy now via Nuclear Blast Records) is Overkill’s nineteenth album and its combination of scalding thrash and churning mid-paced groove is a barn-burning way to cap off a remarkable decade (check out our recent album review here). The 2010s started with the band signing to Nuclear Blast Records and delivering the absolutely storming Ironbound. These two events revived a flagging spell that began in the early 2000s and was coloured by rickety behind-the-scenes business dealings, precarious deals with precarious labels, and the downturn metal suffered at the hand of grunge and metalcore. Admittedly, the albums of this era, Bloodletting, Killbox 13, ReliXIV, and Immortalis had their highlights, but lacked the overall punch and power they were able to defibrillate on Ironbound and subsequent releases. And the fun generally starts with Verni, where he’s at his happiest: alone in his home studio, cranking out a never-ending barrage of riffs and ideas for fun, future use, and shits ‘n’ giggles. 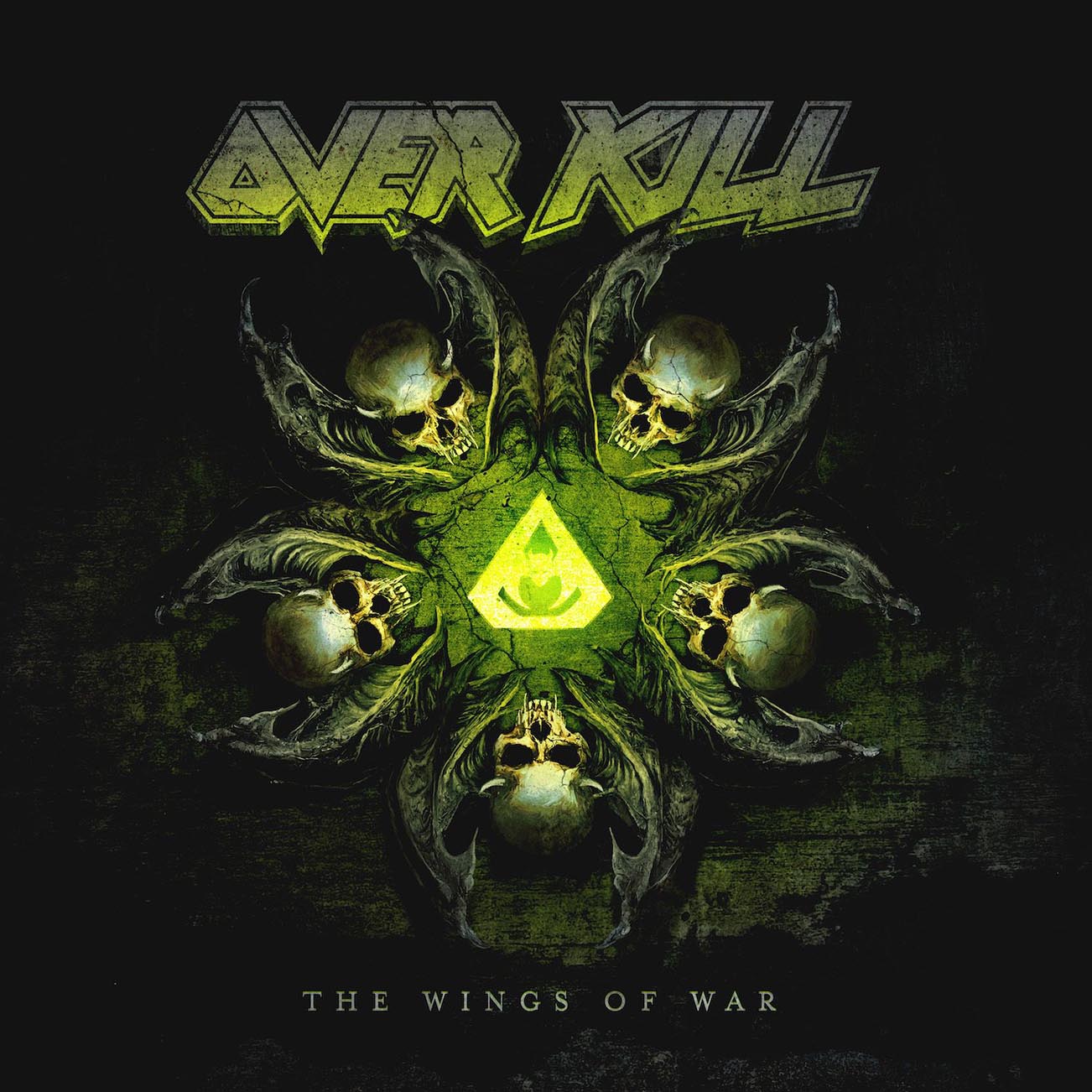 “The writing usually starts with me. I put all the music together and demo everything, drums included, and then get it over to (vocalist, Bobby) Blitz (Ellsworth). Then, the other guys come in and add their two cents as we hash things out in the room together.”

It’s only natural to wonder how a band’s new album is going to differ from its predecessor. Fans and listeners will forever bubble with curiosity about how their favourite bands are progressing, or regressing. Will the new album truly be, as every musician says about their latest work, their best? Or will they be left out in the cold by something they can’t relate to? Will it be a limping rehash of rosier times? Will adjustments be made and experiments embarked upon without deviation from the established script? Or will they go off the rails completely? Any number of bands and/or albums can be plugged into the above scenarios, even if how any one recording by any one band is received is entirely subjective. Oddly enough, according to Verni, the only conversation about direction that’s ever crossed Overkill’s mind and lips pertains to moving forward.

“I’m writing all the time; some bands won’t have anything and are starting from scratch with every album. If I did that I’d lose my mind! I’m writing all year, all the time, so when it’s time to do a record it’s just a matter of going through the bag I have to find the best stuff and form it into songs. What I have on tape dictates where the record goes. It’s not a conscious decision. People ask all the time about a new album’s direction, what we’re going for or what we’re going to do, but I’ve never had that discussion with Blitz in my life.”

The Tao of Isolation II:

For Verni, life in Overkill has always been about the music. As chief songwriter, his laser-sighted focus has always been riffs and arrangements. Ellsworth, his best friend and co-founding member, is responsible for attaching meaning to the sound. Same goes for the album titles, which are far more removed from their surroundings than one might expect. You might think a band whose early years ran parallel to the punk rock scene railing against Ronald Reagan–George Bush conservatism, who were cohorts with thrash metallers screeching about potential nuclear war and who are presently watching their country collapse, at least morally speaking, at the hands of Donald Trump might be more vocal about the state of affairs or have historically spoken to societal ills.

Check out the lyric video for Overkill’s “Last Man Standing,” also off of The Wings of War:

But The Wings of War is more about what sounds cool and works within the Overkill concept. “We’re not really about the state of the world or having deep meaning to our titles. It’s more about what sounds cool,” he laughs unashamedly. “We liked the wings idea because of our bat mascot and the five different bats representing each guy in the band. A lot of time it does feel like Overkill against the world and that’s a flag we fly; it’s a war in some way. And for merchandise, we thought it would be something cool and it worked with the identity of the band and represented the material.”

“For me, that’s such a perimeter thing,” Verni continues, about the pairing music with social awareness and commentary. “Even when I was involved in punk, it was about the music. I didn’t care about anarchy, railing against political systems and all that. It wasn’t on my radar. Even now with what’s going on, I have every single bit of news blocked from my phone and computer, I get no updates. I cancelled my newspaper and magazine subscriptions and I’m completely isolated from all that and that works for me and my life. Everything is so negative and hateful and it’s better to not have that be part of my life. I keep up a pretty good barricade so I don’t get bombarded by that attack.”

And again, once a metalhead, always a metalhead, even if it flies in the face of the image people have in their heads about what motivates a lifelong metalhead.

“Honestly, and it’s going to sound weird coming from a thrash metal guy, but what fuels me is joy. The best songs come out of me when I’m feeling good. When it’s a sunny day and I’m in my yard with my wife and kids and burgers are on the grill; when it’s that kind of day I’m feeling good and positive and when I hit the studio, those are when the best songs come. Not when I’m filled with tension and rage. When that happens, the songs end up disjointed and like an undisciplined boxer who’s just swinging and swinging. There may have been more of that when we were younger because of teenage angst and all that, but as you get better at your craft, I can feel the positive energy of a song and I can feel that in the songs that we have now. It may feel like there’s rage behind it, but it’s positive energy fuelling things. I don’t want to write or even live in that headspace. The last thing I want to do is put my head on the pillow at night thinking ‘That motherfucker!’ I have a great life, a great band, a great place to live and a great wife and kids. I’ve had enough of the negativity. It’s the younger generation’s turn to deal with it. I feel sorry for my kids sometimes, but you know what? It’s your turn now!”

Want to hear some more off of Wings of War?! Check out the lyric video for “Head of a Pin:”