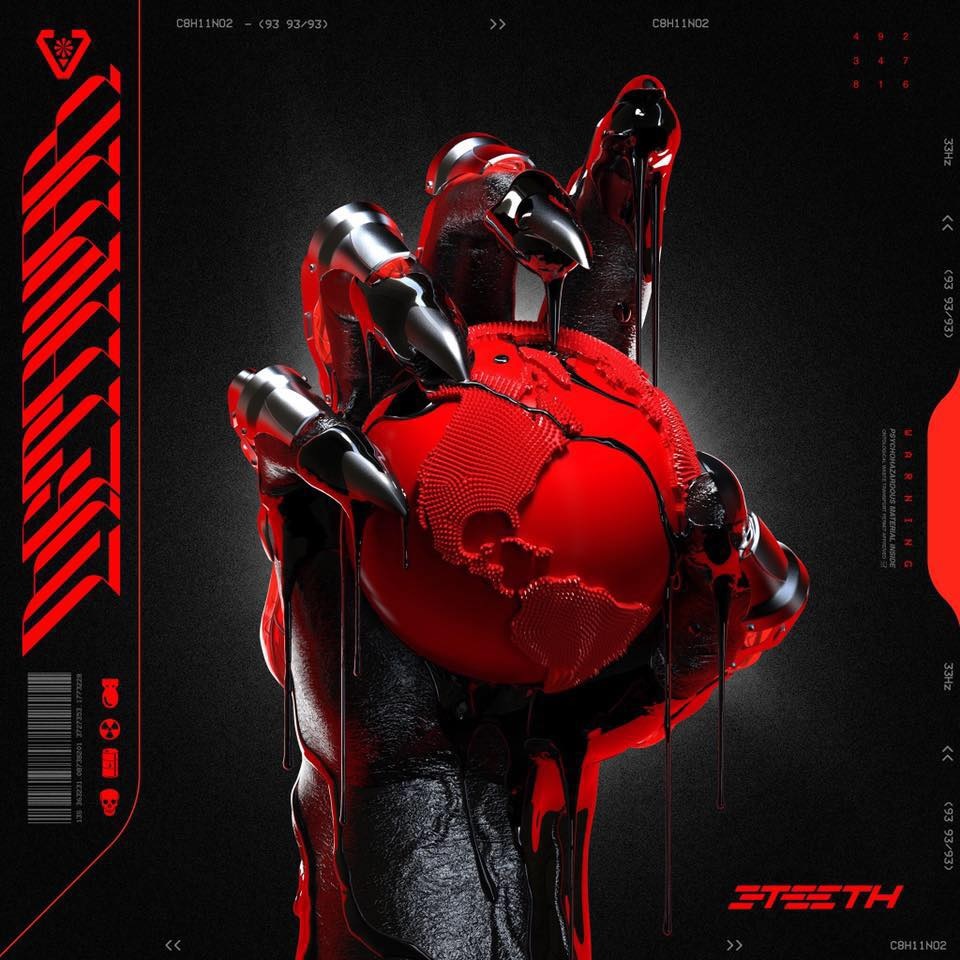 Closely following the disappointment that was Rammstein’s eponymous latest album, 3Teeth’s Metawar represented a light at the end of the tunnel for what has been a fairly lackluster industrial rock showing of late. Apart from Combichrist’s recent One Fire album (read our review here), not much excitement has been generated in this genre. This light, for me personally, was a fitful, flickering one, though, given that I found this Los Angeles-based outfit’s last album, to be entertaining but, at its heart, a derivative homage to acts of yesteryear.

Having said that, I am very happy to announce that Metawar (streaming and purchase options here) is definitely not cut from the same cloth. Yes, there are undeniable nods to past performers in the industrial/metal crossover (Gravity Kills, Stabbing Westwards, Birmingham 6 and more) but Metawar is unmistakably its own beast. Each track is authentic in its delivery, convincing in its message and well-realized with regards to production and composition.

The obvious target audience would be fans of Holy Wood-era Marilyn Manson, with the sneering disdain permeating 3Teeth singer Alexis Mincolla’s vocal performance which makes this comparison undeniable. But the greater range of sounds and moods employed (take the psychedelic closing bridge of “Blackout,” for example) make the record equally appealing to fans of more progressive, thought-provoking rock outfits like Tool and, as I stated earlier, Rammstein fans less than enamoured with the German powerhouse’s soft, toned-down swan song. Both of whom, interestingly, have hand-picked 3Teeth as support acts in the past.

The first single, “American Landfill,” is typically industrial in both its social commentary and machine-like delivery method:

Sadly, the social commentary is the one area where I really find fault with Metawar. I’m all for being outspoken but in contemporary society, being outspoken makes you a target for the hordes of the easily offended unless you’re being outspoken about whatever current social issue it is they’re offended by. And, coming hot on the heels of Madonna’s gun control rant, “God Control,” 3Teeth covering Foster The People’s “Pumped Up Kicks” reads far too much like blatant pandering to the mainstream. In this environment, it’s hard to imagine that groundbreaking bands like the KLF and Extreme Noise Terror gained infamy by firing blanks into the crowd at the 1992 Brit Awards: if any other tried that today, their careers would be over.

Don’t get me wrong, cover versions redone in typically bleak industrial styles is a long-established tradition, championed and revitalized in the public eye by Marilyn Manson with “Sweet Dreams” (1995) or “Tainted Love” (2003) but this, despite sounding far better and much more appropriate than the laid-back, hipster monotony of the original, feels more like an afterthought than a single.

Apart from this minor stain, Metawar is a more than solid record. From the menacing bass intro to “Altær,” which sets an appropriately dismal tone, through to the punishing “Exxxit” (and its equally unsettling video) the whole speaks of conflict, posthumanism and is an indictment on the Baudrillardian mechanisms of surveillance and control that permeate society. Frontman Mincolla has been recorded as describing Metawar as being “here to tear down the walls of our memetic concentration camps.”

The offending cover of “Pumped Up Kicks.” The bodycam video does, however, make for quite a visceral accompanying video:

While the predominant tone of the album is one of discord, there are still lighter moments to be savoured. “President X” may still be built around heavy, muted riffing but its associated music video, replete with reptilian shapeshifters pours satire on American politics and politicians; “Hyperstition,” the instrumental segue into this, is a gorgeous throwback to the sample-laden electronics of ‘80s industrial. The heavy presence of vocal treatments on “Sell Your Face 2.0” similarly reinforce this.

The more introspective, down-tempo parts of the album (“Surrender” and “The Fall” particularly) are remarkable for not falling into the self-pitying teenage angst trap that all too often plagues industrial acts; even the heavily delayed clean vocals and understated guitars give voice to more of a misanthropic message than one of personal displeasure. What they do highlight, though, in the shift back to formula for the album closer, “Time Slave,” is an unfortunate compositional tendency: while the spoken passage over rhythmic verse, followed by full-assault choruses recipe is a tried and tested one, 3Teeth do utilize it a little more than they need to.

The variety of sounds and moods they generate on Metawar tells of a band grown comfortable in their technical abilities, and they definitely don’t need a one-size-fits-all arrangement pattern, so here’s hoping it gets left in the dust for album number four. Here’s a band that comfortably mesh the traditional industrial themes of politics, S&M sleaze and psychedelia into a terminally uncool genre of music and still, somehow, come out the other side sounding relevant and pushing boundaries.

Metawar would have been groundbreaking 20 years ago and instant club hits a decade ago. The fact that they’re willing to stick to this outdated mould and still create something that sounds fresh is just more testament to 3Teeth’s brazen industrial attitude.