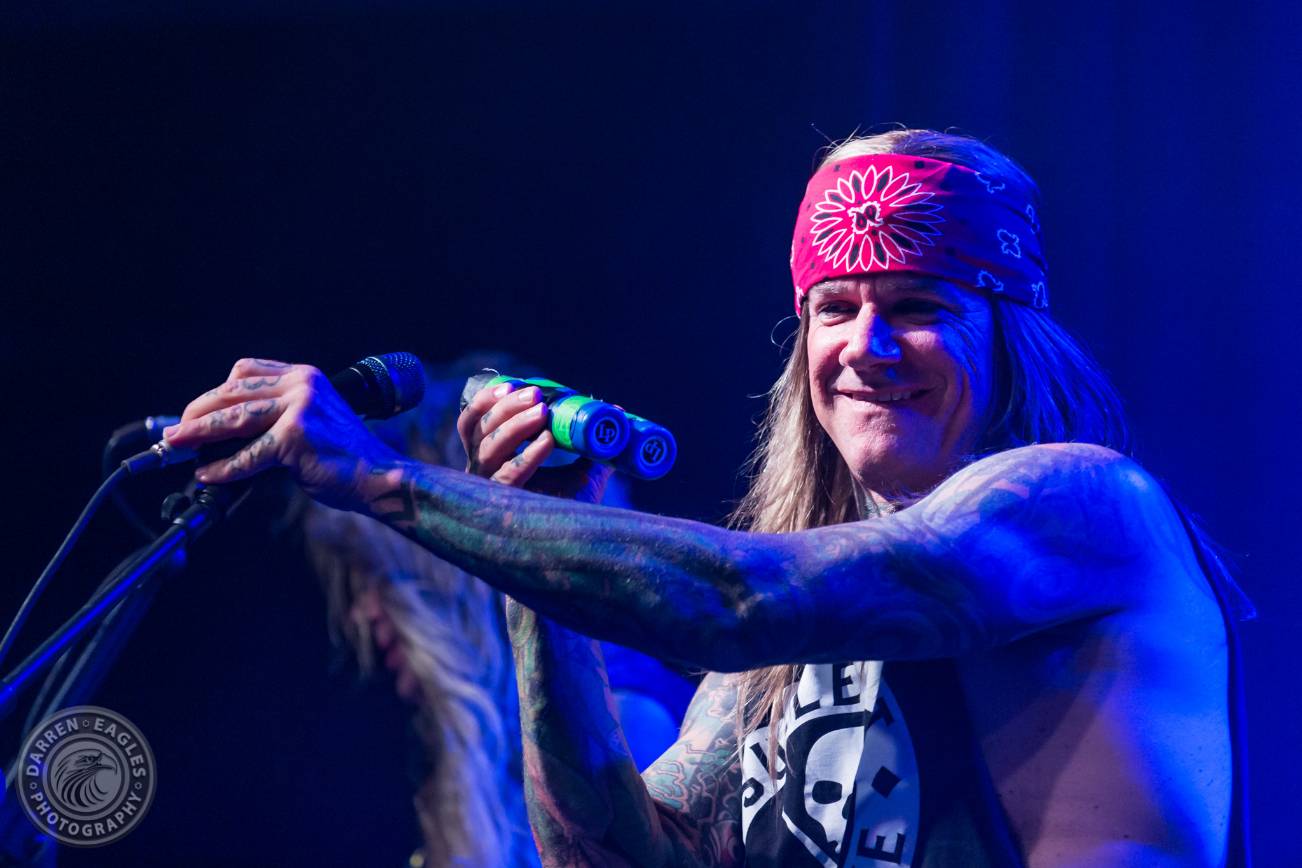 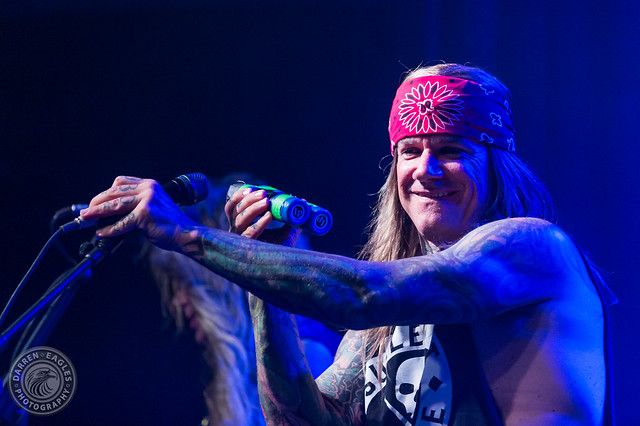 Some say that hard rock ‘n’ roll and metal is all but dead, with R&B/Rap and the scourge of pop taking over the music world. Well, the numbers might show that to be the case, but there’s a metal band who still quietly and consistently sells out every show on their tours. And Steel Panther isn’t even the stereotypical metal band that should be doing just that. But here we are.

Opening their “Sunset Strip Live!” Canadian tour in Barrie at Mavricks Music Hall with 1,200 screaming fans of varying ages lining up early, many dressed to the nines in their favourite over-the-top glam metal garb, complete with wigs, bandanas, spandex and carefully packed crotches. Michael Starr and company hit the stage with “Eyes of a Panther” from their debut album Feel the Steel and didn’t let up for their whole 15-song set. Steel Panther prides themselves on taking all the trappings that have made glam metal the fun that it was, and added a non-stop explicit song lyric component, and over-the-top stage banter and interaction with the crowd to the mix to stage a fun and energetic metal show. A show that no one else is doing.

The band is known for adding selected popular covers into their set. For this tour, the likes of Van Halen’s “Panama,” Ozzy’s “Crazy Train,” Whitesnake’s “Here I Come Again,” and Bon Jovi’s “Livin’ on a Prayer” were showcased. Satchel’s guitar solo also worked its way through snippets of Steve Miller Band, Weezer, Rush and a few others before he jumped up on Stix Zadinia’s kit and banged it out with one hand while playing guitar with the other.

Have you seen Steel Panther’s “Wasted Too Much Time” video ft. Stone Sour? No? Screw you!

Some call the band a parody. While the song subjects and album titles offer the crudest innuendo and straight-up crass that the band could get past the record company censors, these guys can seriously play. The material is as catchy and hard-driving as any mega ‘80s hair metal band has produced. And in a climate of super politically correct social media, this group is a welcome slap in the face of all things “correct.”

At every show, the guys brings up as many females from the crowd that want to get onstage for a dirty dance session while they play “Gold Digging Whore.” And there’s never a shortage of fans who take them up on the opportunity to shake it with the band. Bassist Lexxi Foxx usually gets the lion share of the attention to go with his lion mane of hair. We even had a wedding proposal (and acceptance) when the band brought up a couple to serenade them with “Girl from Oklahoma” and it’s chorus of “Suck my balls allnight….” It’s fun to watch a band not take itself too seriously. And the fans who appreciate the ride.

The opening slot was no slouch either. Edmonton’s Striker is six album straight up metal machine that was given a nice long set time to showcase their newest album Play To Win properly. Machine gun double bass, squealing guitar harmonics and hard driving vocals got the already packed room moving early. Maybe the record company should drop one of their current cookie cutter squeaky clean pop prince or princesses and give a metal band like this some worldwide attention. 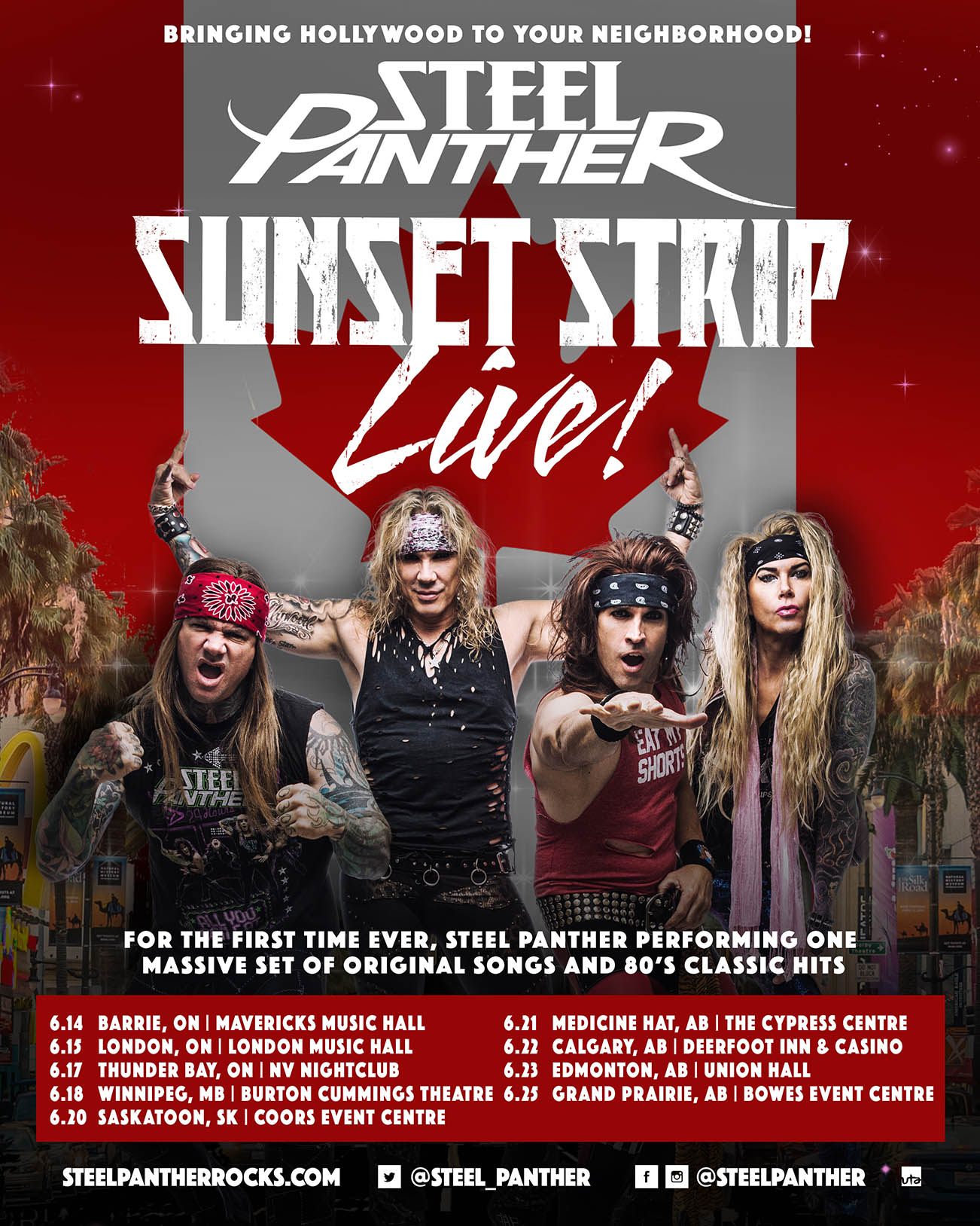