Are you “mad with power?” Well even if you aren’t or maybe would like to be, and instead you just really love metal and video games, then Mad With Power Fest is where you need to be this summer! A celebration of power metal, arcade games, and other nerdy delights, Mad With Power is a yearly festival bringing the best in power and heavy metal to Madison, Wisconsin with this year’s festivities taking place on August 10th. Some of this year’s headliners include Theocracy, Lords of The Trident, Novareign, and Helion Prime, along with many, many others.

To get you nice and hyped for this superb summer extravaganza, we have a brand new TOP 10 courtesy of Ty Christian, vocalist for Lords of the Trident as well as the festival’s organizer. Aside from his own musical career, Ty has been booking and managing bands since 1999 and is also the creative director of the Madison Area Music Association, a charitable organization which raises funds to put instruments in schools. Here now is Ty Christian with his TOP 10 arcade games to play while to play while listening to pulverizing power metal.

Ty Christian: Hails, this is Ty, organizer of Mad With Power Fest, the only heavy metal and arcade/pinball festival in the U.S.! Much like cheese and wine or burger and beer pairing, heavy metal seems to go great with classic medieval-themed arcade games. Here are my Top 10 games to play while you’re headbanging to some classic power metal. Visit the festival’s official website for tickets and more details.

Here’s a three-minute montage of everything you’re going to see at Mad With Power Fest 2019:

01. Magic Sword (1990)
– Not only an amazing synth-rock back but Magic Sword was also one of the most fully-featured medieval arcade hack and slashes around. Multiple NPC partners, incredible numbers of weapons and powerups, and a very decent difficulty level, this was an instant classic.

02. Dragon’s Lair (1983)
– This was a magical machine in the ‘80s. Most arcade games were small, pixel renderers that went “beep” and “boop,” but this was like playing a full motion cartoon! Say hello to Dirk the Daring and goodbye to your allowance, because this machine wasn’t only expensive, it was INSANELY difficult.

03. Knights of The Round (1991)
– The King Arthur tales are cool enough, but an anime-inspired arcade beat-em-up retelling of those tales? Yes, please. Power up your knights and barrel over your foes on horseback, or engage in one-on-one duels to the death. Sounds right up my alley!

04. Joust (1982)
– I don’t know WHAT kind of drugs they had at Williams Electronics in 1982, but sign me up for some of that! “Hey maaaan, what if, like you had some knights who like, uh, fought each other but they were all on flying ostriches? And like, they had to steal eggs and stuff?”

05. Dungeon Magic (1993)
– A knight, a ninja, an archer, and a magician walk into a bar… wait a minute, did this game rip off Lords of the Trident!? An often overlooked Taito classic, this beat-em-up is full of adventure!

Check out the rad poster of all which you will witness at Mad Power Fest 2019: 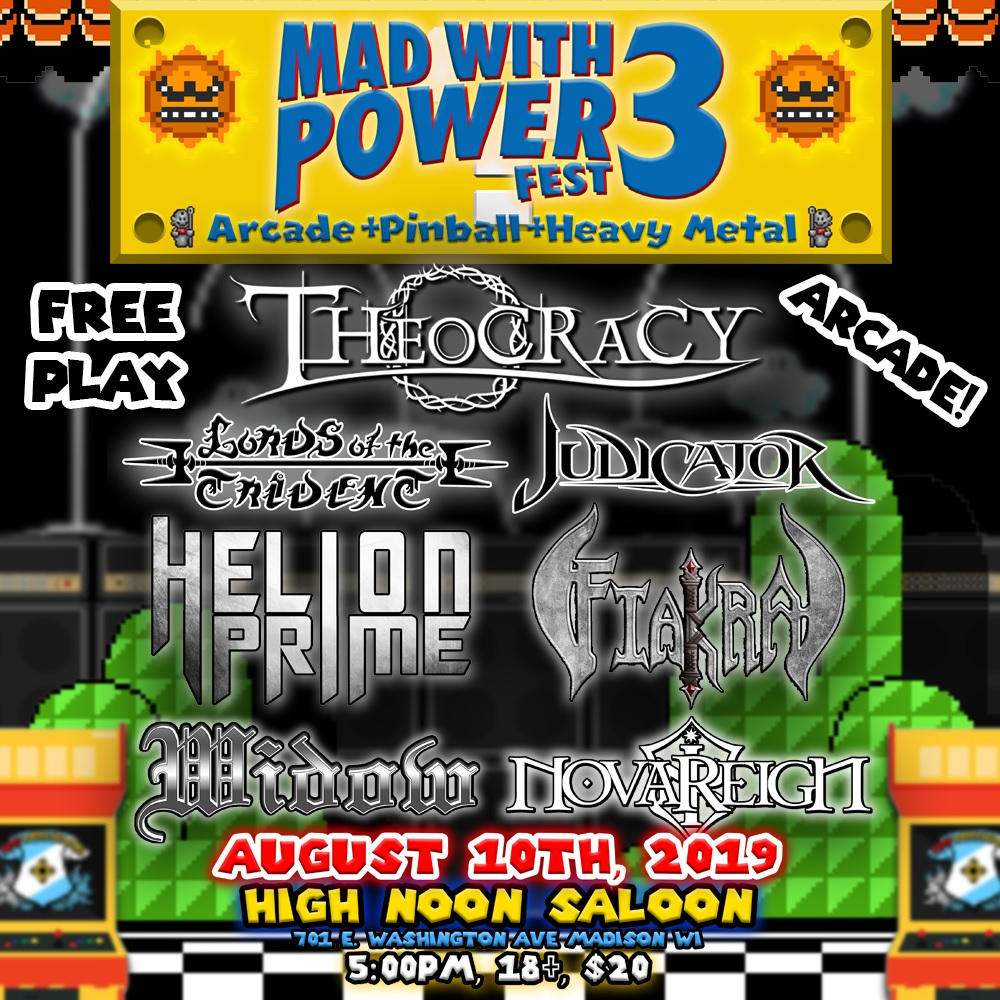 06. Black Knight (Pinball) (1980)
– One of the most classic pinball games of all time! Get your ball up to the elevated playfield and defeat the evil black night at his own game! The latest black knight pinball game, Black Knight: Sword of Rage has an absolutely RIPPING soundtrack done by Scott Ian of Anthrax!

07. Golden Axe (1989)
– Another classic hack and slash that spawned countless sequels, ports, and the like. If you like a game where you kick gnomes to steal their strange magic bottles, this is the game for you.

08. Gauntlet (1985)
– “BARBARIAN…NEEDS FOOD…BADLY!” And you’ll be needing an extra beer and about 500 quarters to beat the granddaddy of all dungeon crawlers.

09. Black Tiger (1987)
– No one ever told me I could put my axe on a chain whip? Why haven’t I tried that before? Black Tiger (or Black Dragon in Japan) is a great mix between Dungeons & Dragons, Ghouls & Ghosts, and Castlevania.

10. Crossed Swords (1991)
– Show me a metalhead who DOESN’T like a classic hack & slash swordplay arcade game! I dare you! Crossed Swords is an amazing “behind the back” third person sword duel game, complete with fights against monsters, knights, and yes, even weird fish-head dudes with flails. A must-play!

So, there you have it. Now, if you want to get your FILL of heavy, power, and traditional metal while surrounded by TONS of free-play arcade and pinball games, don’t miss Mad With Power Fest on August 10th in Madison, Wisconsin. Tickets are going fast, so grab yours today at Mad With Power Fest!

It feels like it’s about time for some Lords of the Trident! Here’s their video for “Death Dealer.”