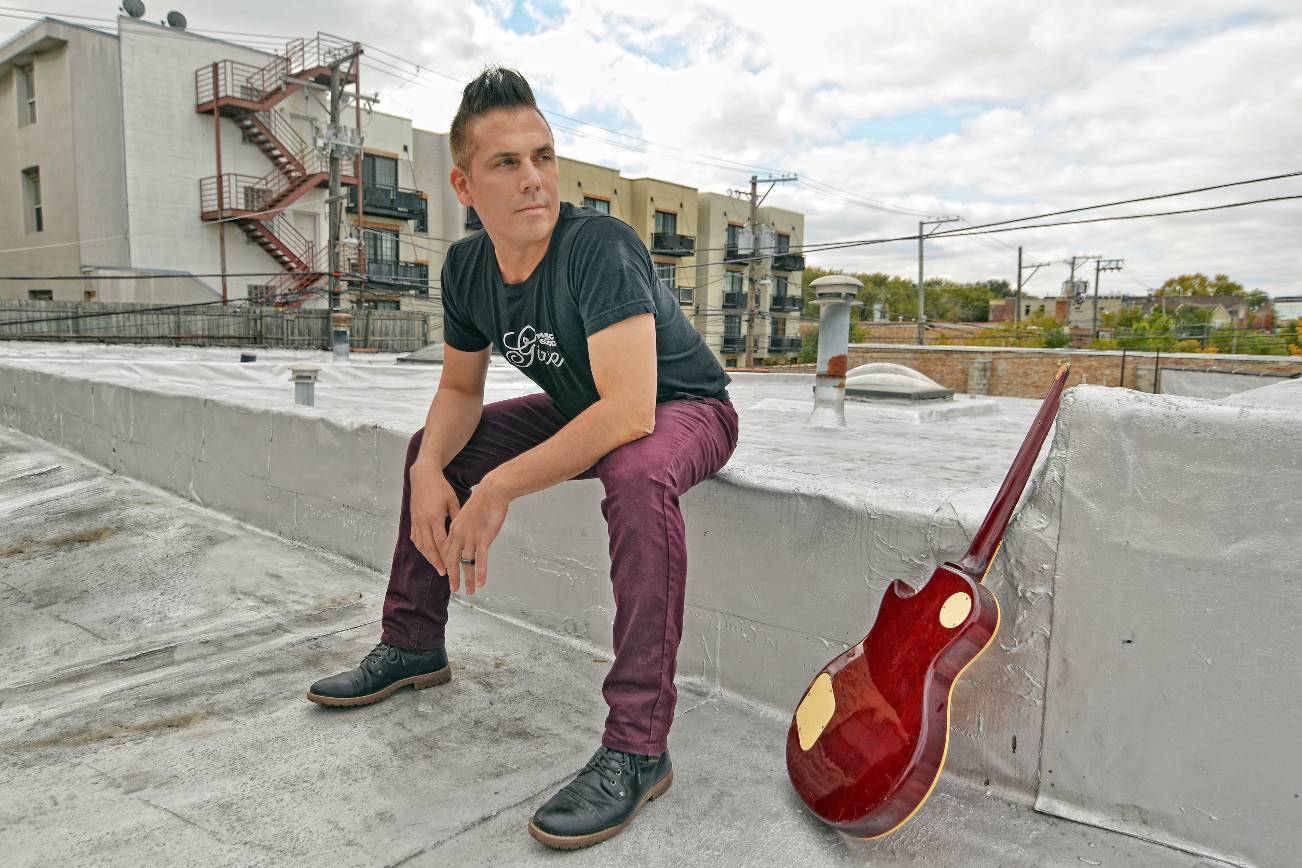 A name you may be familiar with is Janus, a Chicago-based band that left their imprint among heavy rock enthusiasts with their first record, Armor, back in 2006. The success of Armor led to a record deal with ILG, a division of Warner Brothers, in 2008 and the release of Red Right Return which produced the Top 10 Active Rock single “Eyesore.” After a couple of hundred thousand miles of touring, the band’s leader David Scotney parted ways with his bandmates, uninspired and worn down by the corporate side of the music industry.

While being off the road, Scotney refocused his approach to music, and to life. He opened a Neapolitan style pizza restaurant called Oakfire and was inspired to launch his own record imprint, Music-For-Good. Music-For-Good is focused on releasing music that builds awareness of different social causes, with the first release being a re-imagining of The Cars song “Drive” (which you can buy now on iTunes). This is Scotney’s first cause in supporting awareness of bipolar disorder and promoting mental health and suicide prevention. To discuss the release of “Drive,” Music-For-Good and Neapolitan pizza, we recently spoke with David Scotney to get more details into his and Janus’ current projects.

You just released a very special song and music video, a re-imagining of The Cars’ “Drive.” This is the first song released via your own Music-For-Good record label, in partnership with the JED Foundation and the Open Arms Free Clinic, and your first cause to support the awareness and destigmatization of bipolar disorder. What attracted you to this song specifically?
David Scotney: It came about very serendipitously in that I was inspired about a new approach to music which really starts with purpose and message first and music second and stumbled upon the Cars song and was floored by some of the lyrics and how they were very clearly about mental health. In watching the original video I also realized how clearly they were trying to communicate that message as well.

Check out the powerful, and eye-opening, new music video for Janus’ cover of The Cars’ “Drive.”

My first question really leads into my next which is what personally attracted you to starting your own record label aimed specifically at building awareness of various causes? This seems like it’s a rather ambitious project.
Scotney: I was inspired by this approach being very different than what I had experienced being on a label and being part of the corporate machine around major label music and radio. To release music solely for the good of trying to help humanity through art and music was so inspiring to me that I had to pursue it.

The release of “Drive” is the first to be released for the Music-For-Good label. Do you currently have a lineup of singles you’re planning to put out the rest of this year or should we expect more once-in-a-while type releases?
Scotney: We do have more songs lined up and one almost done and ready for release. It’s an original song and much heavier, like our previous Janus material.

Are you planning on welcoming other artists to the label, or will Music-For-Good only be for Janus releases?
Scotney: Eventually, we’re looking to hopefully release other artist material but at the moment we’re hoping to establish the label with the next handful of Janus releases.

With Music-For-Good meant to bring awareness to causes and promote social change, it made me think of the fact that while some hard rock and heavy metal is music aimed at positivity, a lot of it also highlights the negative or painful aspects of life. Do you find that there is too much negativity in music and has this helped motivate you to bring awareness to positive change?
Scotney: I’m not sure it was a sensitivity to anything negative that I was noticing but I did and still do see an opportunity to release music with a bit more clarity and focus around a message and also around bring about social change for good.

Here’s the artwork for “Drive,” a song released for a good cause. 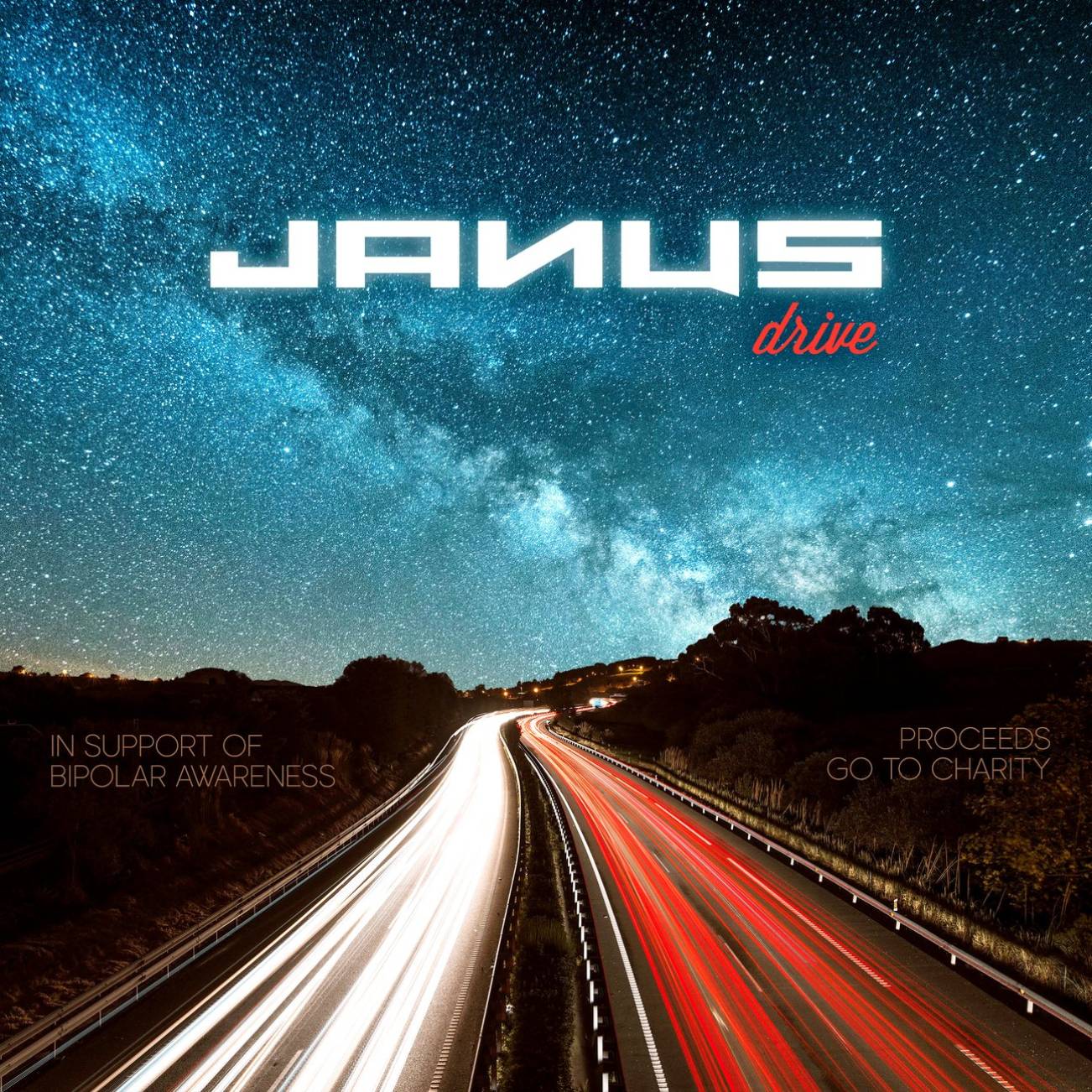 If you watch the music video for “Drive,” you see some of the statistics regarding bipolar disorder released by the National Alliance on Mental Illness and they’re quite staggering, to say the least. How, if at all, has bipolar disorder affected you on a personal level?
Scotney: My sister has struggled with bipolar disorder for over two decades and my family has struggled to understand and support her. It’s not something you’re really exposed to or educated around through typical grade school or even college education. I’m hoping that these statistics resonate with people and hopefully motivate them to learn more.

Do you have a long view approach for Music-For Good? Is this something you hope to continue to oversee for years to come?
Scotney: Yes, I believe this is really a marathon and not so much a short term sprint. If we can reach one more subscriber, one more like, one more follower we get that much closer to really making a longer-term impact with more and more music and content that we release.

Now this question falls completely outside the line of questioning in this interview so far, but outside of Janus, you have a Neapolitan style pizza restaurant called Oakfire. You must tell us how this endeavor came about…
Scotney: So, when our last line of Janus parted ways I, being an artist by nature, developed an obsession with Neapolitan pizza making. There’s an art form there and a 200+-year-old tradition that became something I fell in love with and am still very passionate about today.

Here’s a special video message from Janus announcing and explaining the Music-For-Good endeavour:

How much involvement would you say you have with Oakfire outside of Janus? If I showed up there, might I actually see you present?
Scotney: I’m heavily involved with the senior management team at Oakfire and I cook pizzas every Saturday night.

Tell us what the best menu choice at Oakfire is in your opinion. What is your favorite menu choice?
Scotney: We fly in bufala mozzarella from Italy every week and our classic margherita pie with bufala is my number one favorite.

Tell us what we can expect from Janus for the rest of this year. What can we look forward to?
Scotney: We are looking to release the pop version of the “Drive” single with a cool lyric/performance video and also a Portuguese version of the rock video to reach out to people in South America. Next is the first new original single from Janus, a song called “Stolen Sisters.” It’s about missing and murdered Indigenous women. We’re shooting the video for that later this month. Keep in touch via Instagram!