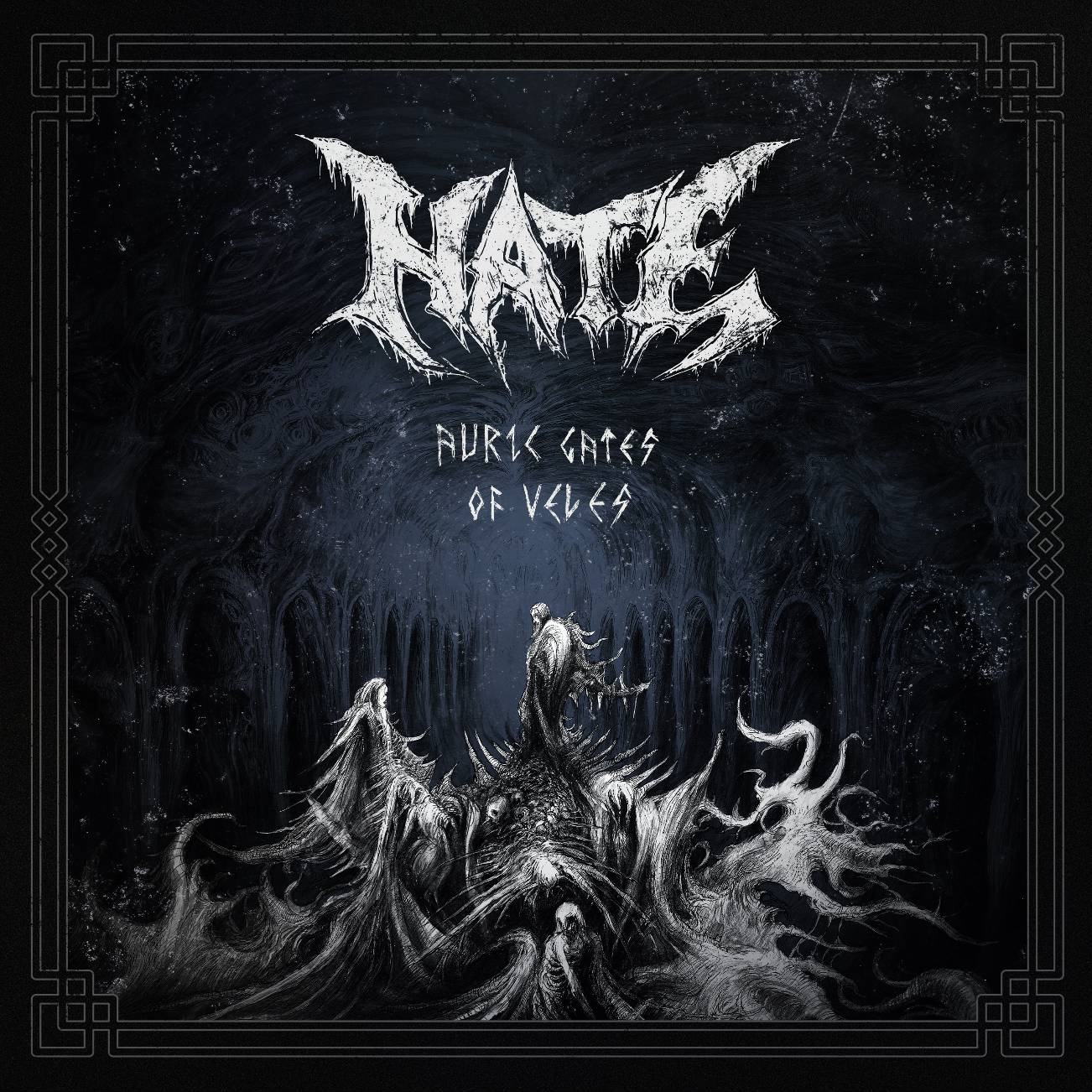 Poland’s Hate have enjoyed a long (26 years!) evolution into the form they now occupy, delivering thick, groove-laden blackened death metal, stemming from pure death roots. Having developed this more melodic, less muted sound across their last two albums (2015’s Crvsade:Zero and 2017’s Tremendum), they nevertheless remain instantly recognizable. This is partly due to Adam The First Sinner’s unmistakable slow growling vocal drawl, but more so due to the construction of the music: even as far back as 2005’s Anaclasis: A Haunting Gospel of Malice & Hatred (widely considered to be their finest offering) Hate stood out among death metal artists for their attention to pacing and rhythm, slowly building brooding atmospheres, with less attention being given to whirlwind guitar solos and unnecessary blasting.

And Auric Gates of Veles, their latest album for Metal Blade, continues in this vein, albeit with a far blacker taint than before. In this way, Hate complete the Polish blackened death triangle for me, forming a perfect fulcrum between Behemoth’s boundary-pushing interpretation of the term and Vader’s more thrash-rooted, headbanging version. Stepping further from Poland, however, they remain right at the top of this game – easily providing a more measured counterpoint to the ferocity of Austria’s Belphegor or England’s Akercocke.

What Auric Gates of Veles (order/listen right here) thus represents is over a quarter century of iterative development of a unique voice in extreme metal: actual blackened death metal, rather than the death metal with blackened themes that most bands in the genre end up creating – making Hate equally worthy of their corpsepaint as they are of their instrument endorsements.

As to the album’s lyrical content, expect cleverly curated themes that range from Vedic and Zoroastrian legend (“Seventh Manvantara”) to Slavonic identity and mysticism (“The Volga’s Veins” and “Auric Gates of Veles”) as well as, obviously, death, dying and all its associated rituals (“Sovereign Sanctity”). It goes without saying that everything is presented in typically dark, irreligious tones, positively leaking scorn and disdain with every beat.

One of the most exciting moments on Auric Gates of Veles comes relatively early in the album: “Thriskhelion” may start with a fairly thrashy, toe-tapping riff, but its unexpected break in pace and mood before continuing as if nothing happened is startling, breathtaking and almost cinematic in its scope. Unexpected turns like this speak to the intelligent arrangement skills Hate have honed over the years. “Salve Ignis,” likewise, isn’t at all what it first seems, growing from a simple snare march rhythm to a tremolo picked, discordant main riff before evolving into a long-form, slow melody and vocal lines punctuated by staccato guitar barks – very much a classic Swedish black metal sound, rather than a Polish death one. The short guitar lead, however, is very much a Hate staple: more an incidental bridge section than an instrumental solo, and far more of an atmospheric vehicle than a technical one.

Would you mess with this group of men? Didn’t think so. Don’t mess around with their music either. 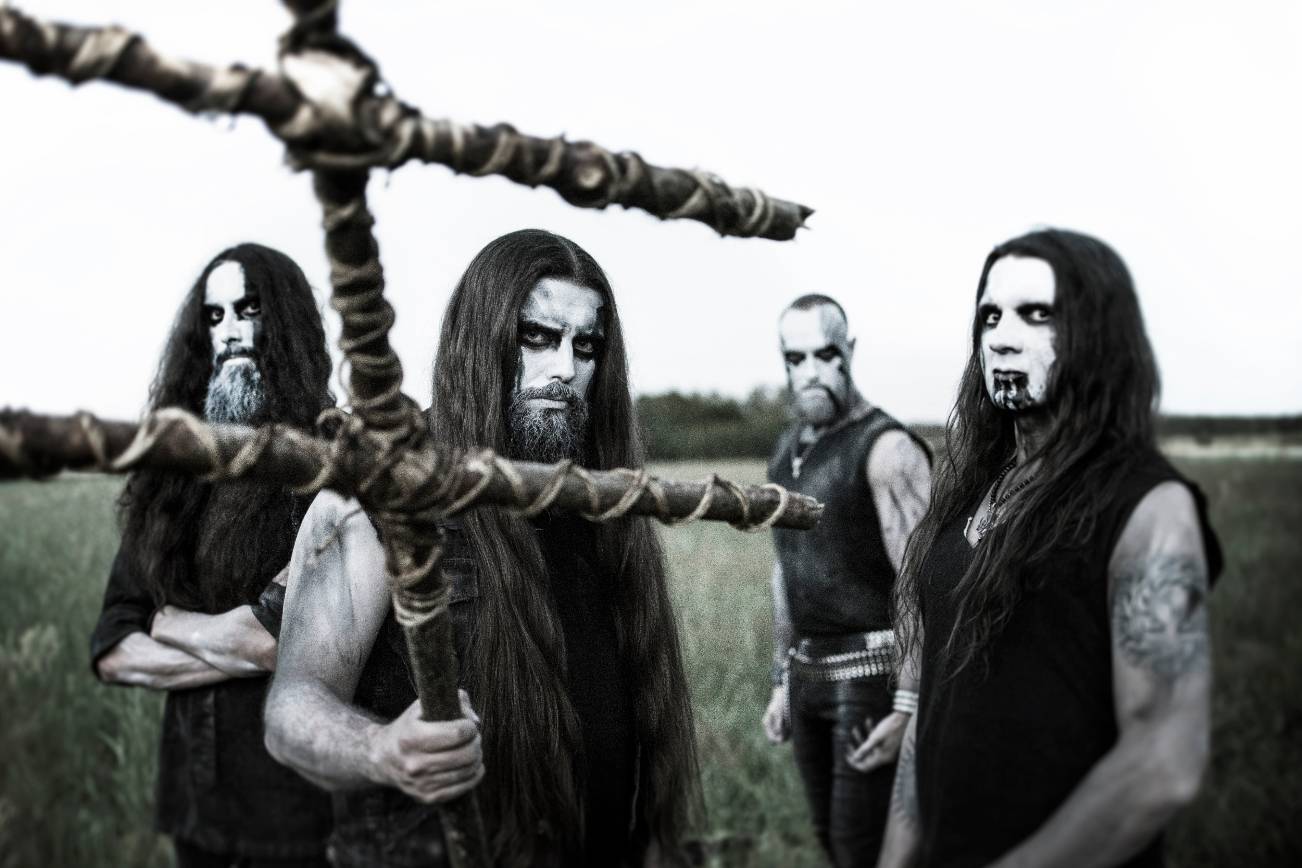 The final track, “Generation Sulphur” also owes more to black than death metal: its high-gain, open chord introduction and persistent blastbeat over a far slower melody are practically textbook tropes. The verse structures may revert to a more ‘classic’ Hate sound, but the overall impression is one of pervasive blackness. And, once more, the solo-ing plays second fiddle to the rhythm: this, more than anything else, is what really makes Hate unique. They obviously have the musical capability to pull out virtuoso lead work, but the restraint they demonstrate lends a threatening overall mood to the proceedings: a seething, banked-down pit of embers just waiting to burst into incandescence. This level of control perfectly matches the actual emotion of hatred – that pure, focused fury that lights fire in your veins – and thus makes Hate one of the most accurately named bands in history.

While Auric Gates of Veles may not feel like an instant hit, instead translating as an evolutionary work-in-progress, it nevertheless has all the longevity of the remainder of Hate’s impressive discography; Hate still have a lot to offer and this is just one more step along their journey.