The cinematic, nine-track album conveys a “1970’s sci-fi distopian” feel while relying on the band’s signature blending of Boeckner’s vocals alongside the lush-yet-raw sonics of analog synthesizers. And, apropos of those sonics, we are delighted to have Operators loan us Devojka – the hands behind the analog synths – to run down the gear she used in the band’s formative years as well as the gear she uses now.

Guest Blog: Devojka the Gear Operator Details Her Synth Rig:
– The story of how my band, Operators, came to be, starts with a fortuitous reunion between two friends, and a table of synthesizers that are a character in their own right. This article is a dedication to the gorgeous analog hardware that has been so integral to our band for the last six years.

You won’t be “Faithless” after hearing this track:

When Dan (Boeckner, frontman) and I ran into each other in San Francisco in the fall of 2012, his synth-driven band, Handsome Furs, was no more. He was looking for a new place to live and a new band with which he could carry out ideas that he’d continued growing even after Handsome Furs folded. I was looking for literally anything to distract me from the soul crushing retail job I was working. He had purchased two new and very sophisticated machines and needed an extra set of hands to help play them.

At the time, my experience with synthesizers didn’t go much farther than a Casio keyboard that my sister had as a child. I had uncovered it in the attic of my parents house in Macedonia, sometime around my first year of college, and after some electrical tinkering, would occasionally use it to flesh out song ideas (basically, just put a samba beat at a painfully slow BPM, smatter sad guitar chords over it et voila! you now sound like every sad bedroom project ever from 2008).

Certainly, though, like so many of us with a white MacBook and its pre-installed GarageBand, I was no stranger to the concept of creating a full band with one person. So when Dan presented the Elektron Analog 4 and DSI Tempest to me, I was instantly taken with the interface, sounds, and POSSIBILITIES.

Prepare to be awed by Devojka’s rig… 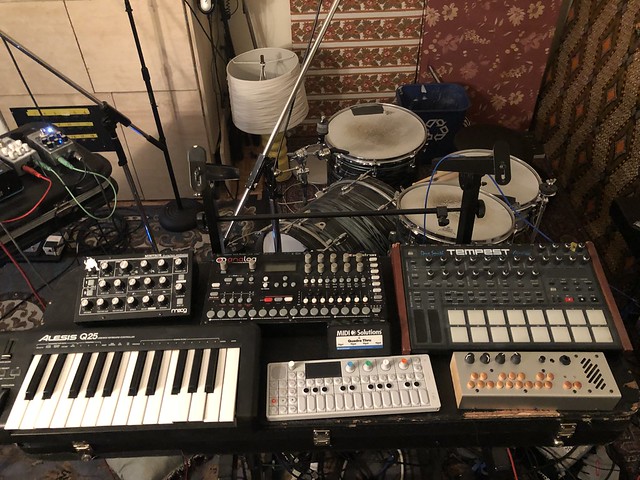 Elektron Analog 4:
– The A4 is a 4-voice analog synthesizer and sequencer with 2 additional tracks for CV and input sound. For us, it provided most of the melodic, bass, and lead parts. It could be used in “Song Mode” for songs with more involved pattern changes. It was also the master clock to all the other instruments, keeping them synced in time. Out of all the gear on my table, this one had the steepest but most rewarding learning curve. One of my first solo endeavours with the A4 was programming a cover of “Love My Way” by Psychedelic Furs for the band to play at a festival, only to find to my absolute horror in front of hundreds of people that all the sounds had somehow been replaced with snare drums?!?!?! I still don’t know HOW exactly that happened, but I’ve since been diligent about ABS (ALWAYS BE SAVING!) and it has yet to happen again since. That’s the beauty of the A4, and many synthesizers actually; I’ll never FULLY know what the hell is going on, but anytime I uncover and master one new thing it feels absolutely exhilarating.

DSI Tempest:
– The Tempest was a drum machine collaboration between Dave Smith and Roger Lynn, and we probably used it to about 15% of its full potential. But what we got from that 15% was leaps and bounds above so many other drum machines – probably because, in case you missed that first sentence, it IS THE ACTUAL LOVECHILD BETWEEN DAVE SMITH AND ROGER LYNN. The Tempest just has this sonic depth to it that I will sorely miss. It provided most of the drums for our songs, as well as several lead sounds, all of which were fantastic. The touch pads light up electric blue, and are the most playable touch pads I’ve come across to date. The interface made drum arrangements an absolute joy, and it is way more expressive than you’d think a drum machine could be. Our band has a drummer, so there is always a live kit accompanying drum patterns. There is only one song to date that we have recorded without a drummer (“I Feel Emotion”) and it’s the Tempest that I entrusted with the duty of providing the backbone beat.

This song will have you declaring, “I Feel Emotion!”

Moog Minitaur:
– The Minitaur is a subharmonic bass machine that I controlled with the CV track on our A4. As one might infer by the name, and the top-left corner illustration of a bull ready to charge, this machine is fierce and crushing as fuck. It’s also sometimes a little surly and I think, doesn’t like to be left out in the sun too long. No, seriously. Our first big outdoor gig was on a gorgeous but very hot midsummer’s day in the outskirts of Portland, where we were slotted as the 2 pm entertainment. As we started playing, the Minitaur wailed out of tune and would not respond to any of the myriad knob turns and twists and resets I subjected it to. I was a defeated, red-faced Matador that day. But for all its temperamental moments, the Minitaur was demonstrative, intuitive and very fun to play. The bass possibilities are really outstanding, and it was absolutely pivotal to the sub punch in many of our songs. I will miss this beast dearly.

Teenage Engineering OP-1:
– Scandinavians seem to always understand that creative whimsy and practicality need not be mutually exclusive, and the OP-1 is no exception. Everything about its interface begs you to get to know it and play it. My first introduction to the OP-1 was a mesmerizing electric cow on its display screen, its neon outline depicted chewing up frequencies like grass, spinning or “digesting” them in its belly at increasing rates. Visceral imagery aside, the OP-1 just SOUNDS really cool and different. It offers a sort of crystalline atmosphere to whatever you’re playing. Although, to be honest, I’m really glad we got one when we did because they are stupidly expensive now.

Radiant Dawn is out now via Last Gang Records. 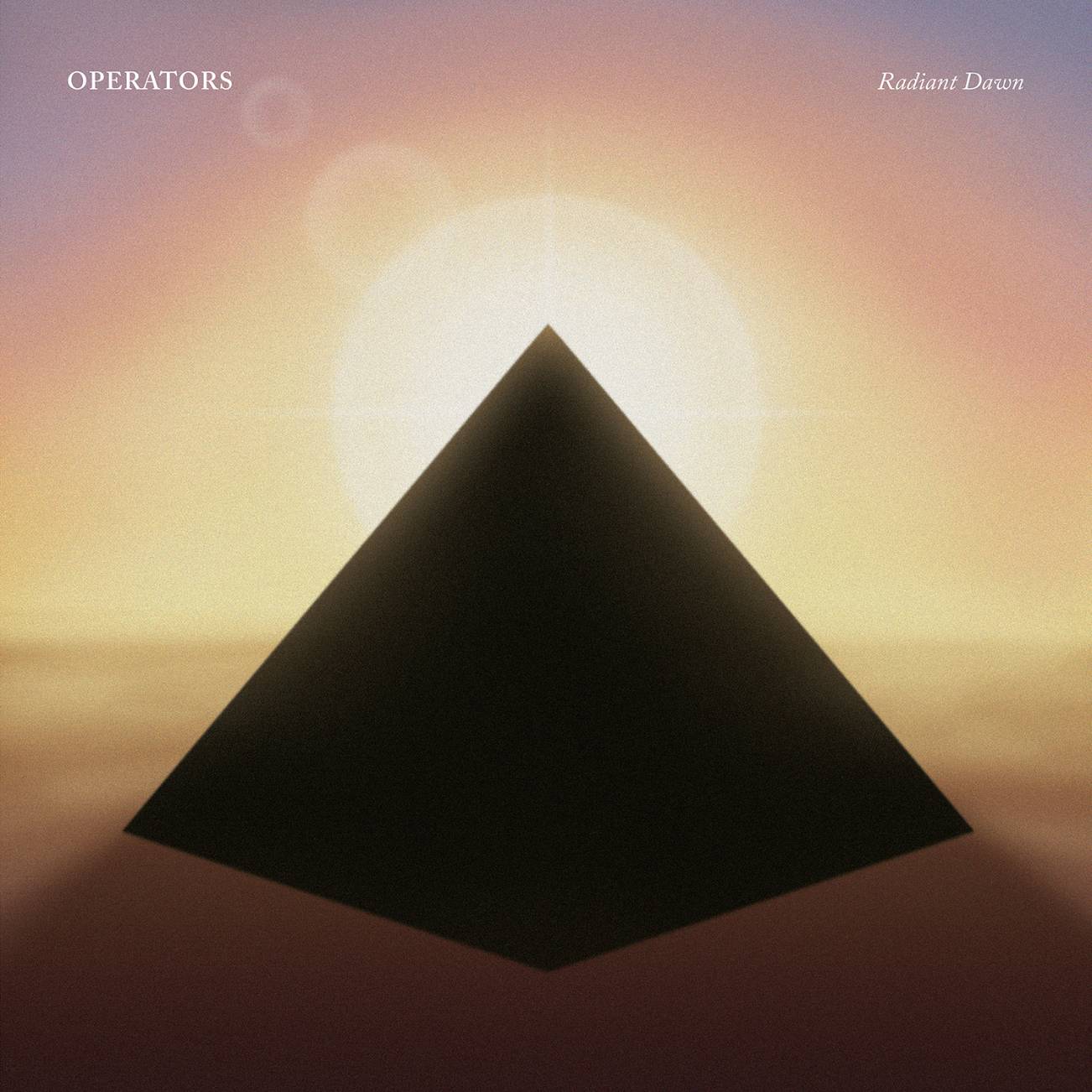 Critter & Guitari Pocket Piano:
– Full disclosure, I got one of these because I thought they looked neat. I’m not usually so casual about where my money goes, but I was in a gambling mood that day I suppose. Fortunately, it paid off. The arps on the Pocket Piano (I affectionately call it the critter, because it’s like a little bug that can crawl right into your ear but like in a fun way) are some of my favourite, and played huge roles in many of the tracks off our 1st LP. It has a simple but absolutely tight midi sync, and can be enhanced by all kinds of pedals.

Alesis Q25:
– I think technically the Q25 was intended as a keyboard controller for desktop/digital work, but we used it as the auxiliary keyboard for our A4. It was the best. It’s lightweight and relatively compact while still having a decent 2 octave range of keys, as well as 2 mod wheels, and velocity sensitivity. It’s occasionally panned in reviews for being limited on features, but that was exactly what I loved about it. I didn’t need 8 drum pads and dozens of dials. I just wanted a keyboard that could send midi with decently sized keys that didn’t make my hands feel like monster paws mashing around. Over the years, I’d occasionally venture out and try a few other midi keyboard controllers. But every time, I’d always come back to the Alesis Q25.

How They “Communicate:”
– The Alesis Q25 sends midi information to the A4, so we have one midi cable going midi-out from the Q25 to the midi-in on the A4. The A4 serves as the master clock for everything on the table. Because there is only one midi-out channel, we use a Midi Solutions Quadra Thru box to increase the amount of channels available. So basically, one midi cable goes from the midi out on the A4 to the Quadra Thru, and then 4 midi cables are sent out to the midi-in on the Tempest, the Pocket Piano, a Novation Bass Station used by Dan, and a Midi Solutions Beat Light indicator that goes to our drummer, Sam Brown. The Beat Light is used by Sam as a visual metronome to help him keep time.

The Moog Minitaur is controlled by the CV track on the A4, so a 1/4″ cable with a splitter is used from the Gate + Pitch on the Minitaur into the CV out A/B. Another 1/4″ cable is used to from Minitaur output into the A4 left input. The OP-1 sends sound out into the A4 right input. This is to help decrease the amount of DI channels we have while touring, although it does limit the gain on the OP-1. There’s also the sacrificing of being able to individually control the Minitaur and OP-1. Alas, trade-offs and a lot of cables are definitely a big part of the live performance process. And I mean A LOT of cables. It always looks like coils upon coils of spaghetti falling off my table. If anyone knows a way to tidy this up, please do get in touch.

What I Play Now:
– For touring our latest record, Radiant Dawn, I’m employing the Elektron Octatrack, the Elektron Digitak, a Microkorg, Korg Electribe, Novation Bass Station and the A4 (in a demoted roll that makes me feel pangs of guilt and betrayal). Is this setup new and exciting? Sure. It certainly could have an article of its own someday. Do I miss my old table? Absolutely. I especially feel the absence of the A4 sequencer, the range of the Tempest drums, and the playability of the Minitaur. At the risk of sounding at best sentimental, and at worst, utterly inflexible, I’ll always unreasonably adore my original set up – it will always be the most expressly Operators configuration we’ll ever have. 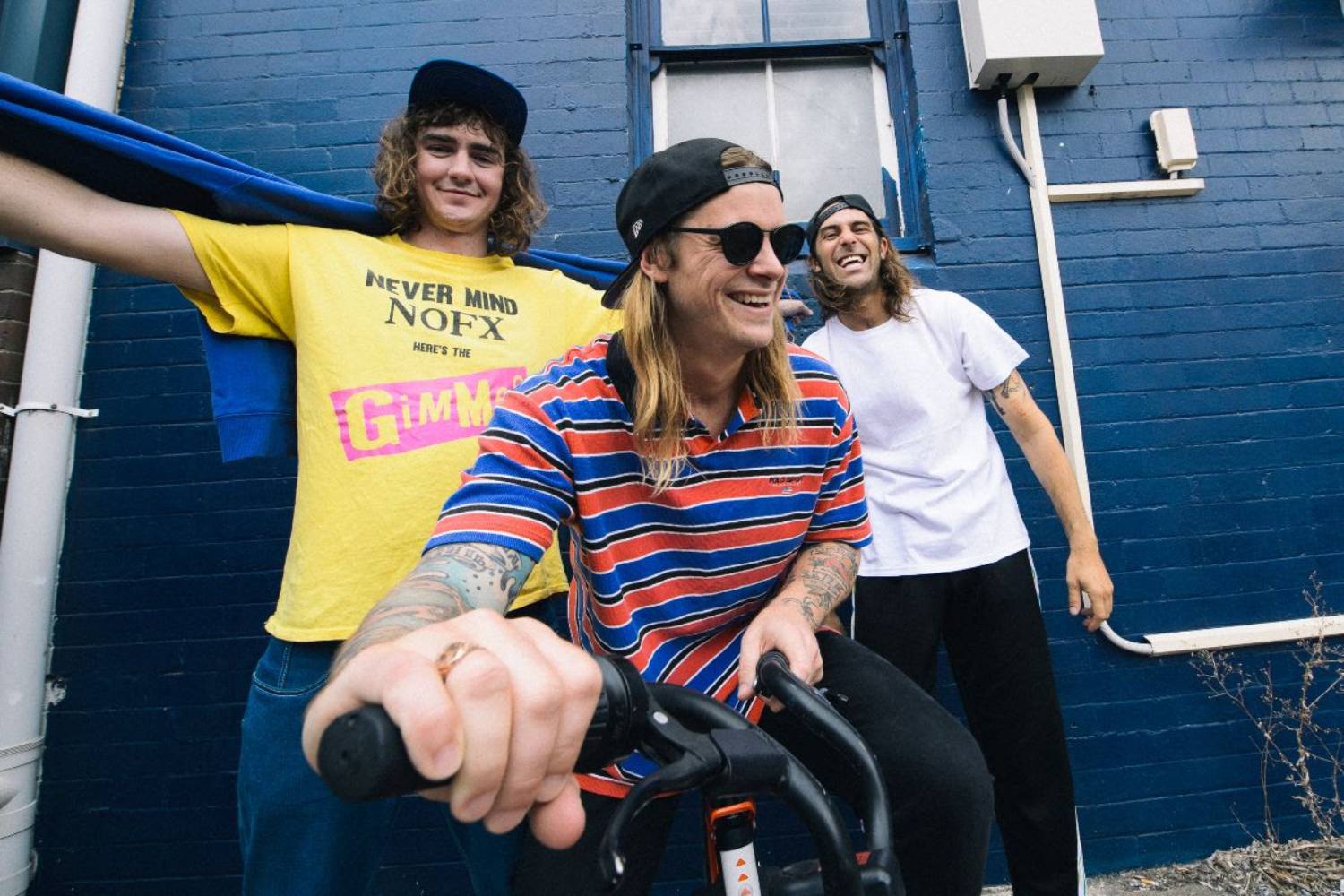 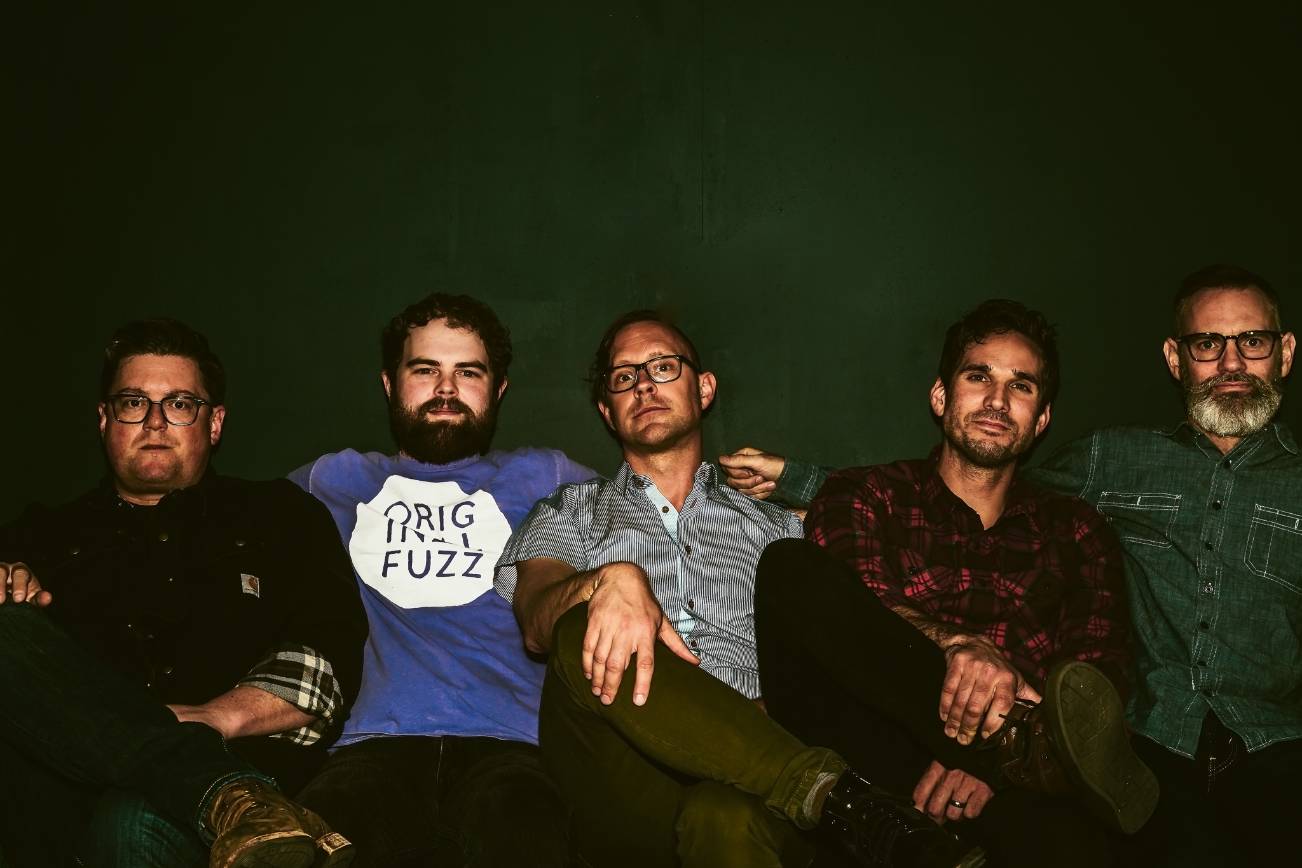