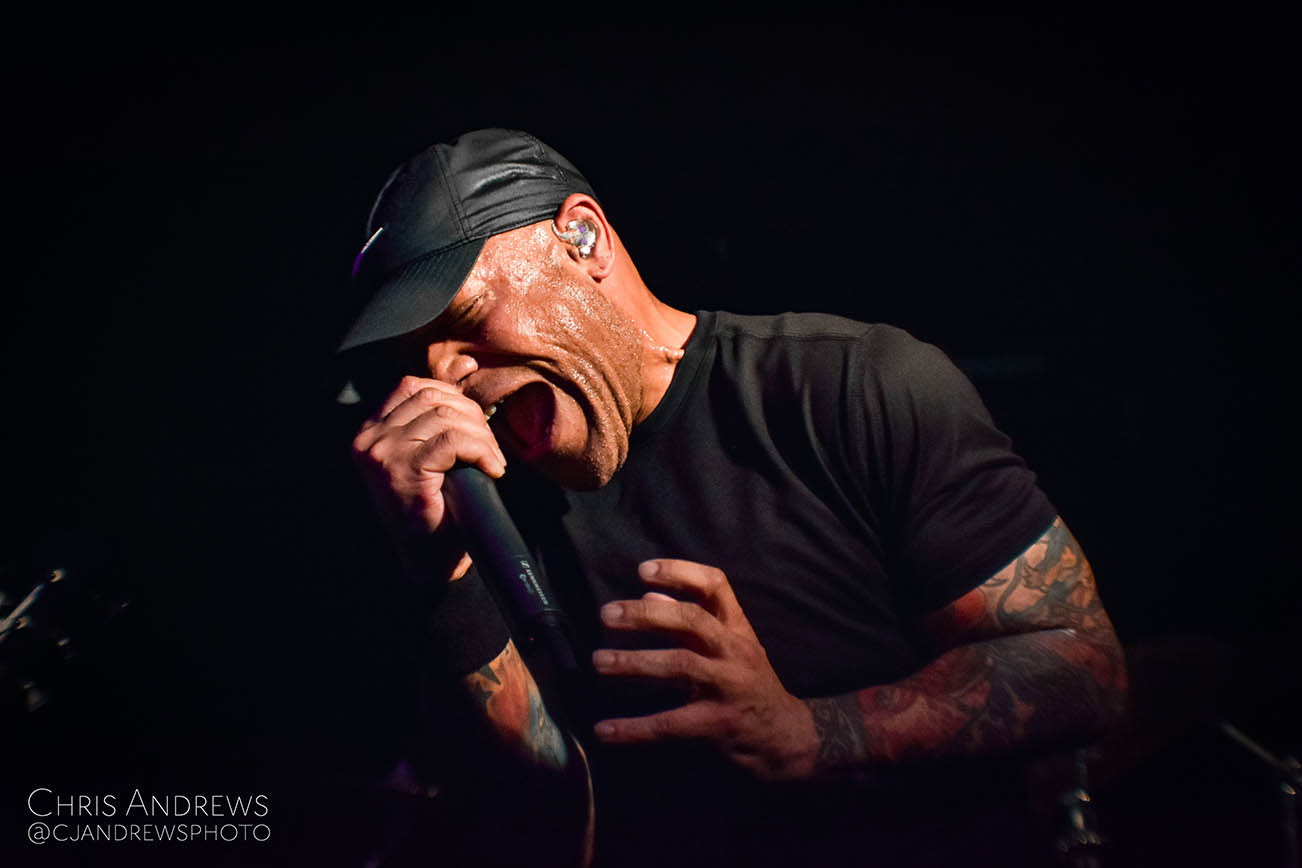 Just three weeks after a superbly received opening slot for In Flames, Light The Torch loop back round the UK for four well-deserved headlining dates. Rather than touring with a package, instead each night’s support is locally curated and offers some of the best up-and-coming acts the local scenes have to offer. Tonight’s show is in the intimate O2 Academy2 Islington, a 250-capacity venue set to become a melting pot of bands from across the metal spectrum.

First up are the post-metal stylings of The Sun Never Set, with vocalist Evan Lebbell’s rasping, machine gun delivery blasting through the room. Their music is ethereal and rich, with a twin guitar tapestry weaving a thick backdrop to their sound. The room gradually fills throughout their set, and the audience are all attentive to the five band members packing out the tiny stage through until the conclusion of their all-too-brief set. Sadly, the room and mix didn’t lend itself to their sound being represented to the max of its potential shown in the recorded “Set It Alight,” but still a band to see again and keep an eye on.

Check out the standalone track “Set It Alight” below, and look out for The Sun Never Set in the future:

Cerca Trova’s sound is rooted in early-metalcore from the 2000s, with Atreyu-esque cleans forming choruses between chugging verse riffs that wouldn’t sound out of place on a Shadows Fall album. Through their genre on display, the reason for their selection on tonight’s bill is clear, and their delivery is superb. Locked in rhythms with drums, bass and guitar perfectly synchronised get heads nodding from front to back, and the tales of Greek mythology and plague-ridden bones told between tracks add an extra element of intrigue to their performance.

Main support tonight comes from Dishonour The Crown, who in contrast to the previous two acts are straight up hardcore thrash; comparatively their audio assault is relentless. Some members of the audience look a little shell-shocked by what they’re hearing, but the vast majority embrace the savagery of their sound and bang their heads in time with downtempo drops. The sheer heaviness of their performance is infectious, whipping the full and warm room to a crescendo prior to tonight’s main event.

Blast the cobwebs from your system with Dishonour The Crown’s savage slab of hardcore thrash “Same Shit Different Decade”:

Entering the stage after a fairly lengthy sound checking delay, the reception which greets Light The Torch shows that the packed out crowd does not mind one bit. Frontman Howard Jones immediately starts throwing himself around the stage in his inimitable manner, prompting the floor of the cosy Academy2 to open up into a pit of swirling bodies and swinging limbs. By the time Light The Torch hit “Calm Before The Storm” third up into their set it’s taking every fibre of my being to stop from singing along in the photo pit. It’s not only a standout track in their set, it’s a standout track in the genre and one any of their peers would be proud of.

Tonight’s performance was utterly joyous and triumphant, with each band member beaming from ear to ear as their set progressed, leading Jones to state that he “never was a bullshitter” – so you know the smiles are for real. It feels odd to say that, for a group filled with such experienced musicians as Light The Torch, it feels like they’re about to break through into the big time, but that’s exactly how tonight’s show comes off – as an artist playing a venue way too small for them. Here’s hoping they fulfill their potential and come back soon.

Do yourself a favour and listen to “Calm Before The Storm” immediately, because if you haven’t heard it you’re missing out: