The term “extreme metal” covers a wide variety of genres, subgenres and tastes – but if there’s one contemporary band that have embraced the term in its most literal sense, it must be the Italian orchestral death outfit, Fleshgod Apocalypse. While other groups easily fit the appellation through their sheer misanthropy (Shining), religious stance (Deicide), visceral aural assault (Anaal Nathrakh) or even blood-drenched intensity of live performance (Watain), Fleshgod Apocalypse simply take whatever they do musically and push it beyond its limits. Whether it’s technical prowess (illustrated by frontman and founder Francesco Paoli’s switch to drums to better achieve the speed and sound he wanted), orchestration or intricacy of composition, this is a band that make every aspect of their recording process, well, extreme. The net result? Fleshgod Apocalypse have developed such an unmistakable sonic signature since 2011’s Agony album that their music is instantly recognizable – and their influence is equally noticeable among other, younger acts trying to follow in their footsteps, like Gorgon or Scuorn.

Their latest album, Veleno (pre-order options available from the label here), both follows this formula and, unsurprisingly, exceeds its mandate – making it the fastest, heaviest, densest album they have crafted yet, but still, paradoxically, the most melodic, nuanced and soothing. By way of contrast, it is interesting to note that Greek symphonic death metallers Septicflesh may use the same ingredients – expansive orchestral arrangements, choirs and crushing guitar work – but their product ends up more atmospheric and “soundtrack-esque,” shifting away from the base foundation of death metal. A similar consequence can be seen in the music of Carach Angren, while the likes of Ex Deo offer up mere flirtation with the orchestral side of things, remaining more firmly rooted in the metal end of the spectrum. Fleshgod Apocalypse thus present the most balanced product within this sub-genre, with equal attention given to rippling leads, peculiar heel-toe and gravity blasts as to piano melodies and soprano vocal passages – the latter once again courtesy of Veronica Bordacchini, a vocalist deserving of far more attention than she receives.

Fleshgod Apocalypse offer up some “Sugar” and it’s oh so sweet!

The instrumentation experimented with on Veleno also steps beyond prior boundaries, with traditionally Irish uilleann pipes adding a completely different dimension to album opener, “Fury.” This is itself illustrative of the more spontaneous compositional approach Paoli describes in the band’s official launch press release, which he describes as being a “lack of limits, full experimentation, an unavoidable process of rediscovering our roots…” Despite this rough-and-ready compositional free for all, the polish and refinement applied to Veleno is anything but: the mastering is absolutely crystalline and the overall attention given to the production sets a very high benchmark indeed. “Fury” also introduces a repetitive, staccato punch theme that carries through the album – especially in the ‘Push! Push! Push!’ chorus of first single, “Sugar.”

Bassist Paolo Rossi’s clean vocal histrionics – themselves now a large part of the Fleshgod signature – make tracks like “Carnivorous Lamb” instantly recognizable within the greater Fleshgod Apocalypse paradigm. No mean feat, considering the very un-death metal base of this track, which switches time signatures like an Iron Maiden classic.

Other eyebrow-raisers include the deceptively gentle interlude of “The Praying Mantis’ Strategy” – which itself segues into the progressively fluctuating “Monnalisa,” a gothic ballad; albeit one with a far heavier low-end and much larger, bombastic choruses than that description should merit. The double-time bridge passage, with its whispered vocal is gaspingly lovely – but when the soprano backup vocal underlines the more expected death growl shortly after, cold sweats and gooseflesh are the order of the day. The mélange of operatic and death metal on display here is something I haven’t experienced with such delight since Therion’s Vovin album, just over twenty years ago.

One of the band’s latest press shots, which accompanied this new album. 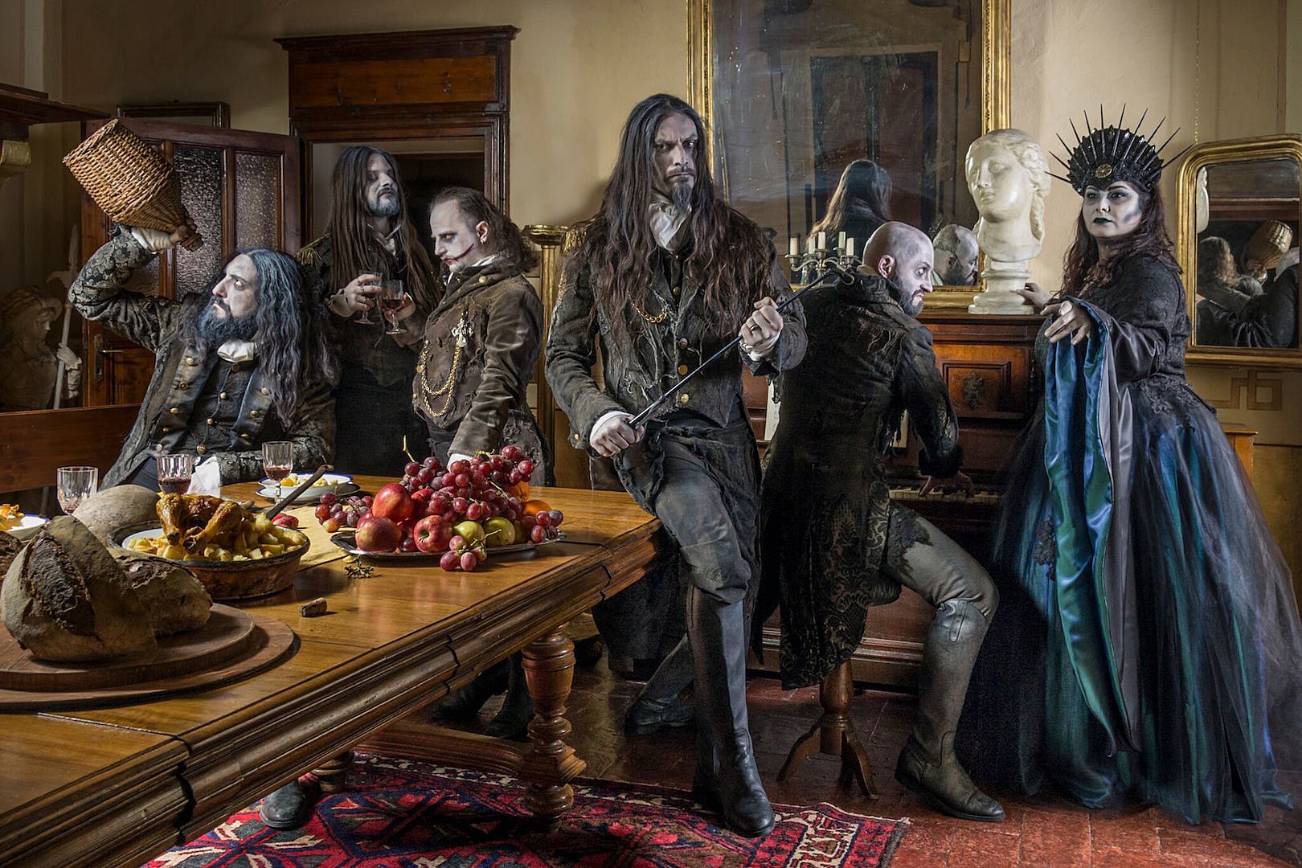 This comparison leads in turn, to “The Day We’ll Be Gone”: Bordacchini and Paoli’s uncharacteristic duet. A surprisingly deft marriage of two vastly dissimilar vocal styles nevertheless culminates in something so achingly beautiful that I can find absolutely no fault, even if I wanted to. The way the backing cello becomes a shimmering lead guitar accompaniment is pure genius – something more likely to be found in a Queen chart-topper than in contemporary extreme metal. Following this with the bass-led, pinch harmonic-laced “Embrace the Oblivion” swiftly dispels that notion however – and, despite the disparity of moods nevertheless generates a believable unity in overall sound.

In maintaining a historical precedent, the album closer is an instrumental bearing the name of the album: these showcases of contemporary classical composition are always welcome and “Veleno” in no way disappoints. While someone with a more traditional classical background could argue the depth of phrasing or even the dynamics of the piece, the target audience must be kept in mind: sadly, even with the genre becoming more inclusive, a host of metalheads would barely notice the difference between a Chopin étude and a television commercial jingle.

In all honesty, the best way to describe Veleno is this: it’s the best Fleshgod Apocalypse album since their last album, 2014’s King. Their dedication to their craft means that every track they record is a distillation of their steadily improving skill, with no filler to speak of. This is a band that is always reinventing itself – an iterative musical process that keeps pushing the musical envelope and leaving other artists wondering just how far they can go. I would call this group the Wolfgang Amadeus Mozart of extreme metal – but that would imply an early death cutting short a career of absolute brilliance and nobody wants that. Veleno is as close to perfect as you get – and, while its pseudo-classical intellectualism may not appeal to everyone, you can only marvel at the accomplishment it represents.

Their is no unrelenting hunger like that of a “Carnivorous Lamb.” 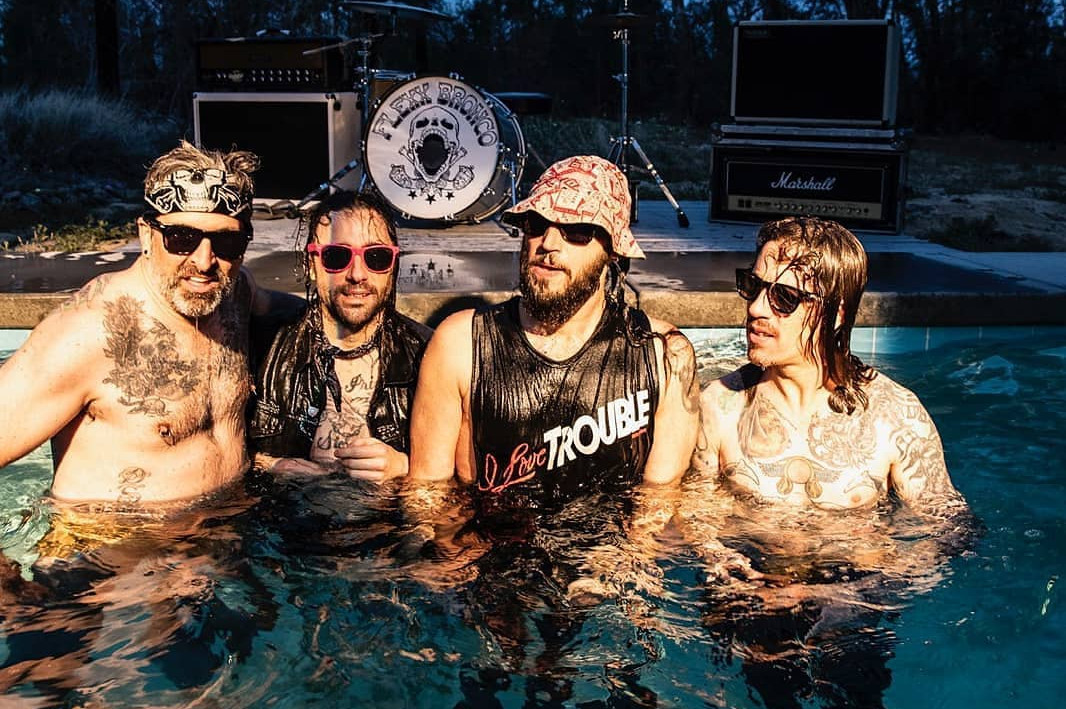