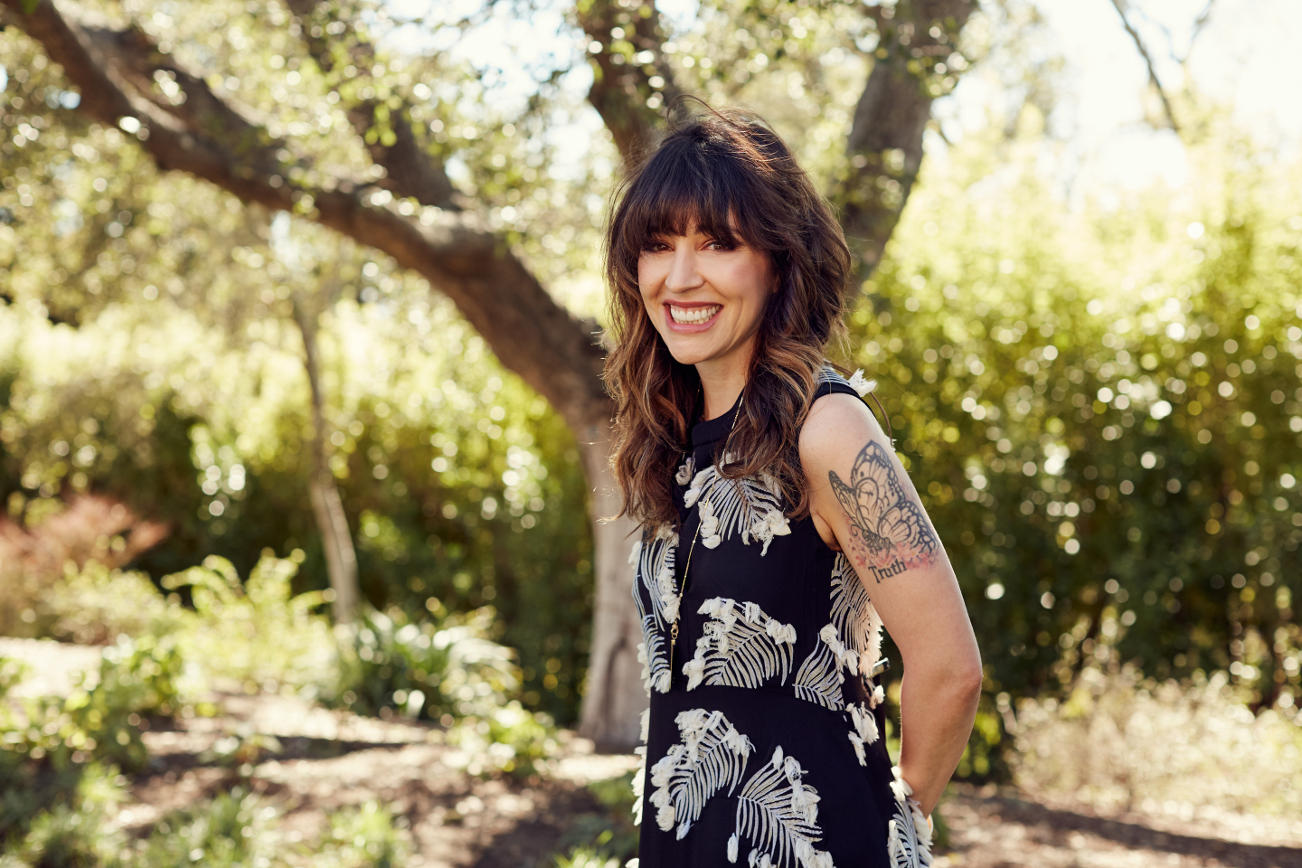 Author TIFFANIE DEBARTOLO Discusses the Process Behind Writing and Creating the Graphic Novel ‘Grace: Based on the Jeff Buckley Story’

Cemented as one of the best albums of all time, Grace by Jeff Buckley, son of the famous folk singer, Tim Buckley, was released in 1999, two years after his death. It’s an overwhelming album that weaves haunting, melancholic stories through a teetering of expansive, albeit fragile, jazz, rock and R&B. It’s not necessarily an album that would, 20 years later, be the apparent inspiration for a graphic novel to commemorate its genius.

There has always been an air of mystery surrounding the life of Jeff Buckley. His rise to fame, his claim to power and even the heartbreakingly poetic way he died all created a distinct persona that has followed him. With Grace: Based on the Jeff Buckley Story, superfan and author Tiffanie DeBartolo, has taken it upon herself to champion the late singer, with a tender focus on the root of his artistry in a beautiful story. The book is a “marvelous” read that you can learn more about from our recent review here. You can order the book now via Amazon, amongst other retailers.

We had the chance to ask Tiffanie, a music history savant in her own right, some questions about what drove her to write Jeff Buckley’s story.

Thanks for chatting with us, Tiffanie! Your graphic novel is so cool, it’s one of those things you didn’t know you needed until you read it and then can’t believe no one thought of it before. I’m also a massive fan of Grace and listened to it while reading your book. It’s hard not to feel so emotional while reading it. Do you feel a deeper connection to this specific piece of work more than other albums? And, why do you think that is?
Tiffanie DeBartolo: Thank you so much! Thank you for not just reading this book, but feeling it. That was definitely the idea. As I’m sure you know, there’s a magic in the album that I think everyone who loves it feels. Jeff’s spirit wafts out of the speakers and right into the listener’s heart, that’s what I think. It happened like that for me. About thirty seconds into the first song, on my first listen, I felt it. And it literally changed my life.

It’s hard to say why I had that reaction to Grace, but my guess is that it’s a testament to Jeff’s talent, and also his sensitivity to his work, his own vulnerability, and his ability to make music that captured that. Because I think that’s what people connect to when they fall in love with Grace. This record resonates on a deep level.

If you really want to tap into the emotional stroke of Jeff Buckley’s music, there’s no better place to start than the music video for his cover of Leonard Cohen’s famous “Hallelujah.”

I read that you dedicated your first book to Jeff Buckley. What is it about him that you’re most drawn to?
DeBartolo: The purity of his spirit, the light and the dark in his work, and the way his music seems to echo and articulate my own feelings about love and passion and heartbreak, and every other emotion contained inside his collection of songs.

It’s clear that this is more than just a story about Jeff’s life. Was it important to you to convey the massive impact his music has had?
DeBartolo: Yes, that was my main goal in writing the book. Jeff’s music had and continues to have such a huge impact on my life. I have met so many people who say the same thing, and I wanted to capture that so that the fans who read the book can say, “That’s exactly how I felt the first time I heard Grace!” It’s why I added the fictional element that weaves through the book. Because I thought it was important for someone in the book to feel about Jeff the way all of us feel about him.

And to that point, the book shares a different side of Jeff. He’s often seen as sentimental and melancholic, what made you decide to also explore other facets of his personality?
DeBartolo: Well, one of the greatest joys of writing this book was doing the research, and that meant getting to read Jeff’s personal journals. The man I met in those journals wasn’t a brooding, melancholy dude. He was smart and focused, astonishingly insightful, and more than anything, incredibly funny. That was the Jeff I came to know as I was writing Grace, and that was the Jeff I wanted to share with the world.

Check out the artwork for Grace: Based on the Jeff Buckley Story, which was released April 30th via First Second/Macmillan. 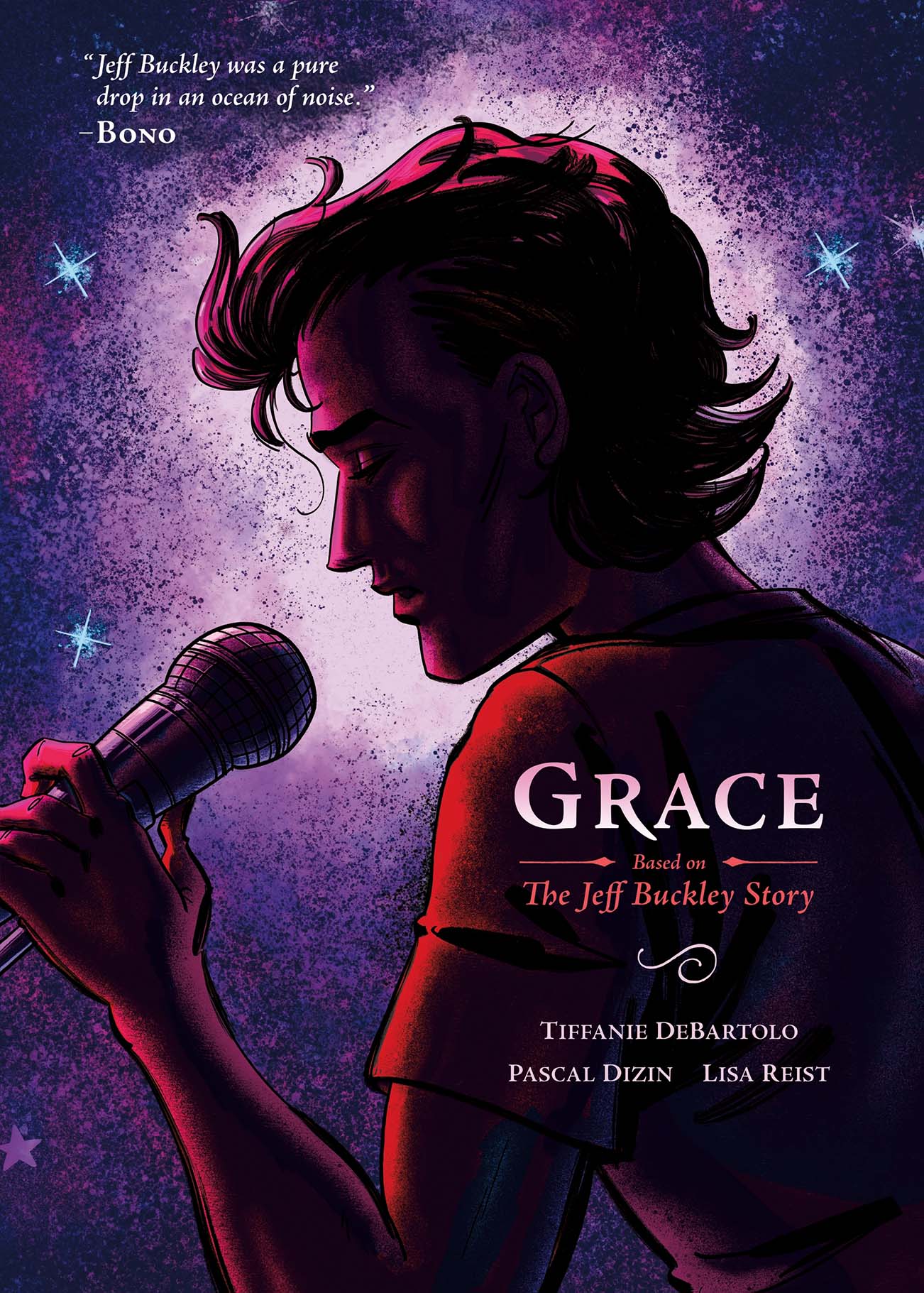 What was the process of creating this like? And, how did you manage to get access to backstories and information about Jeff?
DeBartolo: I was actually hired to write this book. The publisher had the idea to do a graphic novel about Jeff, and he went to Jeff’s mother, Mary Guibert, to pitch it. I think she turned him down at first, but once he managed to convince her, she brought me on to write it. She’d read my first novel, God-Shaped Hole, a couple of years earlier. That book had been inspired by Jeff’s music, and I guess she felt like I could capture something worth capturing.

She was super involved throughout the entire process of writing this book. Jeff’s legacy is obviously very important to her, she is a pretty incredible woman in her own right, and she works tirelessly to ensure that anything bearing her son’s name lives up to his standards. She provided me with tons of information and documentation, and I interviewed a lot of people as well. I didn’t have any trouble getting people who knew him to talk about him. He was well-loved and is still greatly missed.

Check out the music video for the title track to Buckley’s all-time great, Grace.

Now that Grace: Based on the Jeff Buckley Story is out in the world, how do you feel? Are you happy with how you’ve shown tribute to him? And, do you think you might explore this medium with any other albums or artists in the future?
DeBartolo: I couldn’t be happier with this book and I’ll tell you why; because so many people who have read it keep emailing me saying, “This book made me cry” or “You really captured Jeff” or “I was so moved by this story,” and that’s all an author really wants from her work. I was moved when I wrote the book and I want readers to be moved when they read it, and to know that they are means the world to me. The book is a tribute to Jeff, not just Jeff the musician, but Jeff the man.

Believe me, nobody is a bigger Jeff fan than I am. It was an honour for me to be a part of this project. I care about Jeff’s legacy very much. I want people to listen to his music and remember him for a long, long time, and if I can play a little role in that, I’m thrilled. As for writing more graphic novels, I don’t foresee that happening. I’m primarily a fiction writer. Though music constantly and continually inspires my work. For example, the novel I just finished writing is called Sorrow, after The National song of the same name.

OK, last question. I’m just really curious, is there a greater significance to the mention of Radiohead’s Pablo Honey record at the beginning?
DeBartolo: I want to say yes, but the truth is, it’s just an album that I love, and when I thought about what Henry, the fictional character in the book, might be listening to a lot during that time period, knowing his musical tastes and how he was going to react to Jeff, it just made sense. Plus, I’ve heard that Thom Yorke is a big Jeff fan, so I figured a little homage to him would be a nice touch.