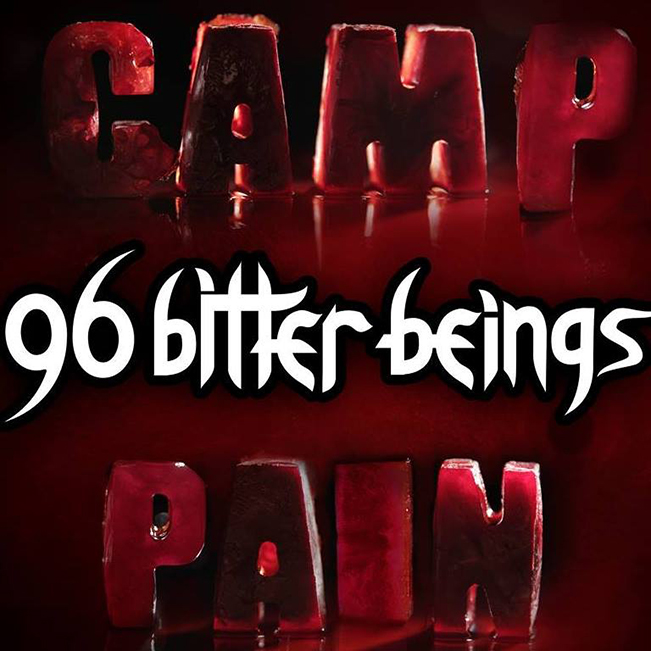 Since leaving notorious skater rock band CKY, dynamic guitarist and vocalist Deron Miller has dabbled in a few other projects such as death metal band World Under Blood, the self styled “math metal” band previous to CKY, Foreign Objects, and an acoustic album of CKY’s biggest songs. After so many experimental projects, he now enters into a new venture with the alternative rock outfit 96 Bitter Beings (named after one of Miller’s most popular CKY songs) and the crowd-funded debut Camp Pain (see what they did there?), available to stream on Spotify here.

Those familiar with Miller’s work will find some of his best riffs and lyrics on this record, and for those not familiar, allow me to introduce to you the work of the riff monster that is Deron Miller. Camp Pain is full of incredible guitar work handled by Miller himself on rhythm, Kenneth Hunter on lead, and Shaun Luera dealing with the epic bass action. Though introduced in a satirical manner with “Try it Again” where the band mash through a practice of “Still Unstable, Still at Large,” this album is anything but a joke; with clean guitars, snappy lyrics delivered by Miller, the bass, and drums from Tim Luera crisp within the mix.

Tracks such as the previously mentioned “Still Unstable…,” “The Whipping Hands” and “Bugs and Snakes” feature some seriously catchy hooks, the latter being my favourite and containing a mid-filler that the listener will be humming to themselves, and “The Whipping Hands” presenting some scathing, complex lyrics contained above the punchy guitar melody (‘She is so repulsive from the outside in/lethal leviathan of alcohol and oestrogen’).

The extremely hummable “Bugs and Snakes”.

With the aforementioned hard-hitters, the album continues to deliver everything it needs for the complete phenomenal package with the ballads of “Where Were You,” “On and On and On and On” and “December Higher Power” right through to the fun interludes of a cover of Michael Jackson’s “Beat It” (originally heard from CKY in London 2009), instrumental sampler “Cavalcade of Perversion” chock full of horror references, and “Megadextria” which is a cover from Miller’s other brainchild Foreign Objects, off of the album Galactic Prey.

This is a great record for CKY fans of old to sample should they miss the original format of the skater rock quartet before they became a blues rock trio… or for fans of complex riffage and thought-provoking lyrics layered over a deliciously crisp mix of instrumentation to savour again and again. It’s a ridiculously addictive release from vastly underrated Californian musical talents – in fact I have been cycling it almost on repeat since its release and I suggest that you do too.