It’s been six years since Darkened Nocturn Slaughtercult’s last album, Necrovision, so this latest release, Mardom, is a long-awaited and much-anticipated addition to the War Anthem Records roster. It has been well worth the wait, though: the German black metal institution delivers in spades with an uncompromising, orthodox black metal assault. Mardom reinvents no wheels, but the powerful nostalgia it conjures of early 1990s second-wave Scandinavian black metal is a breath of frigid and nihilistic air, thawed in the fires of hell before crushing the ears of all that stand in its way.

The great tragedy that is likely to befall Mardom (pre-order a copy here), though, is one that Darkened Nocturn Slaughtercult have always faced: their pigeonholing as a “novelty” band within black metal, all thanks to their frontwoman, Onielar. Despite a long and proud history of women in metal – including often-cited luminaries like Doro Pesch (Doro and Warlock), Angela Gossow (ArchEnemy) and Tarja Turunen (Nightwish) – female-fronted metal bands regularly get judged by their gender and not the quality of their music. And that’s a shame, because Darkened Nocturn Slaughtercult are, after over two decades of black metal, a serious force to be reckoned with [feel free to check out this edition of our Women of Rock series for further reading in this vein] and Oneilar herself deserves to be taken seriously based on both her vocal and guitar skills, not just her thigh-length hair, or blood-spewing, inverted crucifix-waving stage persona.

This latest record is tribute to the 22-year Darkened Nocturn Slaughtercult heritage, evoking the likes of early Mayhem and Gorgoroth while still staying true to the tried-and-tested recipe of fast, technical playing they first introduced on their now-legendary 1999 Pest Called Humanity demo. In itself this is a similar approach followed by Norwegian luminaries like 1349 and Tsjuder, to whom Darkened Nocturn Slaughtercult have been favourably compared in the past. But don’t take my word for it, enjoy a full album stream courtesy of War Anthem records below.

Would we lie to you? You can stream the entire album in all of its blackened glory here.

Stand-out touches deserving of mention include the Polish lyrics of “Mardom – Echo Zmory” (translated as ‘Echoes of Nightmares’) adding an exotic textural layer to the dynamism with its typically soft sh-zh-psh phonemes contrasting beautifully with the harshness of the music. Then there are the atmospherics that slide in without warning in “T.O.W.D.A.T.H.A.B.T.E” and the perfectly captured menacing ambience underlying “A Beseechment Twofold” – which also features guitar work reminiscent of Satyricon. The spoken rasp of the vocals on “Imperishable Soulless Gown” (itself beautifully introduced by the instrumental “Widma”), makes for a mid-tempo monster easily mistaken for Immortal, and the hellish screams on “The Sphere” close Mardom in bombastic style, complete with a melodic piano fadeout.

Darkened Nocturn Sluaghtercult have also opted to follow a similar production process to 2013’s Necrovision, in that the audio quality is crisp and clear throughout, where prior releases tended towards the muddier, lo-fi black metal school of thought. The result is worth the effort, though: while Darkened Nocturn Slaughtercult’s music may stem from the purposeful primitivism of the early 1990s, hearing the skill with which the band handles their instruments is welcome: this is not some home studio demo, but a culmination of over two decades of dedication to the underground and as such, deserving of the very best studio attention.

The net result is a hellish conflagration of misanthropy, neatly captured in no-holds-barred aural warfare that, despite similarities with other artists, is the characteristic and recognizable weapon of choice for Darkened Nocturn Slaughtercult: hard, fast and virulent black metal, delivered here in a package called Mardom that is an early contender for black metal album of the year.

An image as haunting as the music, this is the band in 2019. 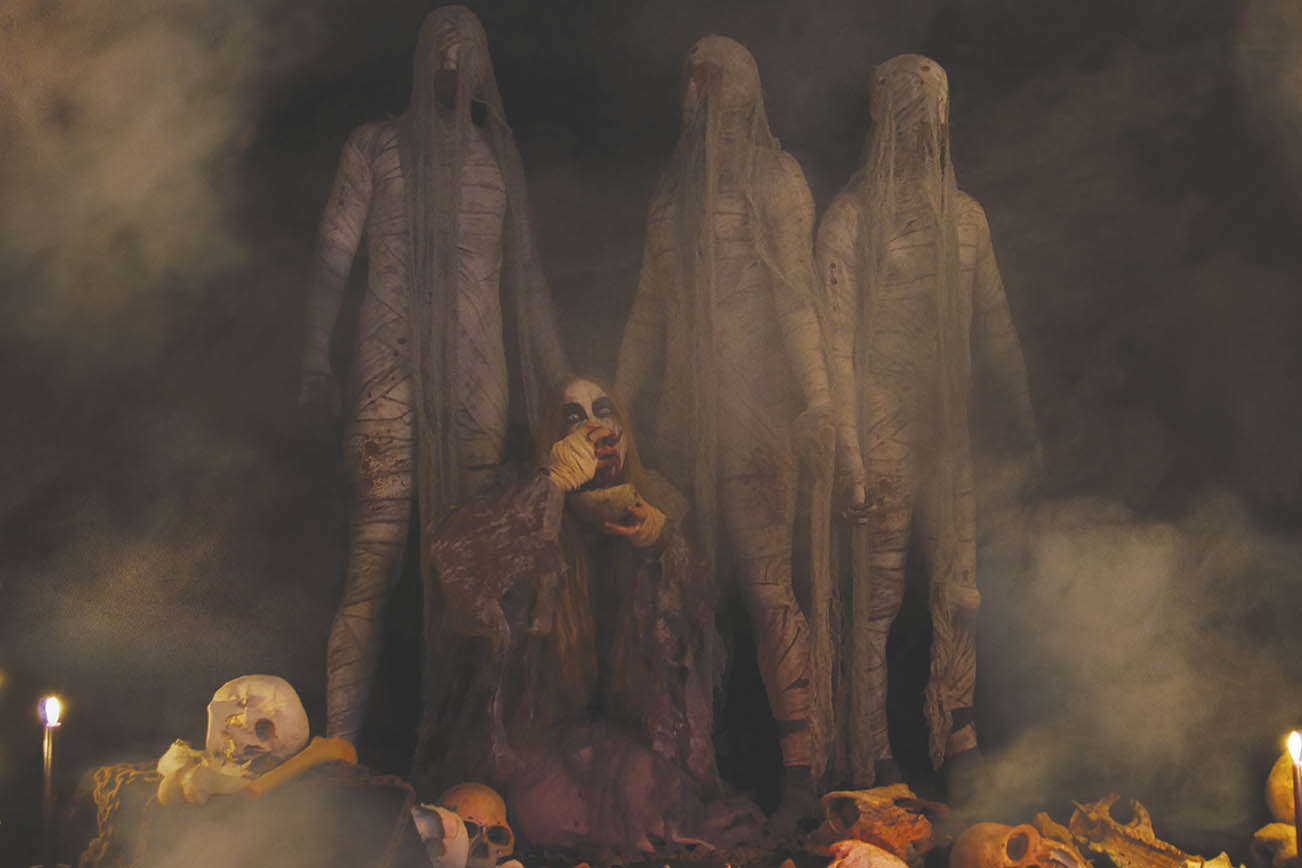