Perhaps the greatest and saddest thing that the internet ever did was remove a superstructure of mystery from our ordinary life. Where there used to be long arguments and debates over whether the tallest person in history lived in Oklahoma or Okinawa, the answers to these questions were never immediately ready like they are now (Google says it was Mr Robert Pershing Wadlow from Illinois, now deceased).

The reason for a series of books like the Guinness Book of World Records, for example, wasn’t to have a television show that no one watched: it was to have a reference for people in bars who claimed ownership over who had the most home runs or who could hold their breath the longest. That was literally a niche that a beer company went into publishing and successfully established since 1955. Nowadays, you want to know something, you reach for a phone, not a book sitting behind the pint glasses at your local.

For people, like myself, who are just on the cusp of remembering the analogue methods of pulling information, it is somewhat anticlimactic sometimes to find your pursued target in the time it took to type this sentence. But with all that said, there are some things we don’t know. While we may know the moniker given to the man who successfully hijacked a plane in 1971 and made off with $200,000, we are still only theorising about D.B. Cooper’s disappearance. Theories abound about where Jimmy Hoffa’s final remains might be, or who was Jack the Ripper actually. Because we don’t know all the answers to these questions, it naturally denies us our now regular slaking of information thirst.

This is the song “The Gerogerigegege” (ゲロゲリゲゲゲ), off the album Moenai Hai (燃えない灰) which dropped in 2016 via Eskimo Records.

One such source of mysteries is in one of the most unusual locations on earth, and certainly the last place I was expecting to be taken when my publisher asked me to follow up on a scrap of paper they were handed in a dive bar in Toronto. He and I shared a chuckle over the preposterous name scrawled on the paper: “The Gerogerigegege,” with the warning underneath of, “Awesome. Fucking. Band. Serious. Fucking. Business.”

With that little information and the adolescent emphasis that went along with it, I was expecting yet another edgelord deathcore outfit from either the states or some exotic locale. Possibly they would have a ho-hum Bandcamp page with some scrawled grindcore logo, replete with an ominous picture of its prepubescent or aging members and, if I was lucky, a couple gushing reviews from fans.

A nice shot of the vinyl version of Moenai Hai (燃えない灰) which came out in 2016. 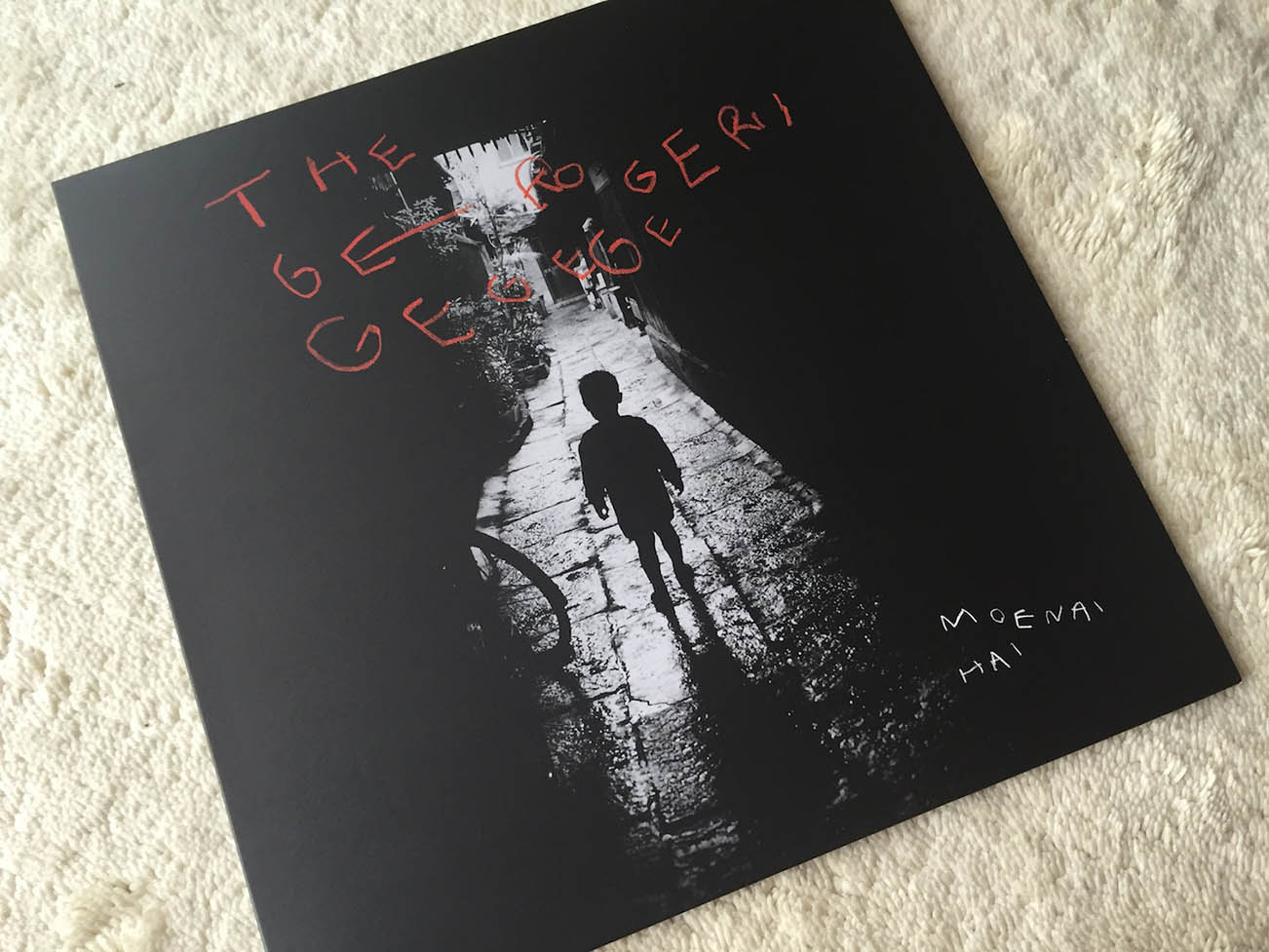 You might think I’m being purposely bucolic or misrepresenting a niche scene, but one quick search on Wikipedia will give you all the basics you will want to know. There you will find the facts: the band was started by a Juntaro Yamanouchi, who would remain the driving force behind the band since its inception in 1985.

Among the eclectic and bizarre facts of the band, you will find the usual pieces of unusual facts about the group that are echoed across the rest of the informational sphere: member Gero 30, who was famed for his public masturbation on stage; the octopus tentacle they packaged as one of their releases; the Showa release following Hirohito’s death in 1989, with the recording of two people having sex bookended on the release, to the tune of the Japanese national anthem; the alternate version of that recording that presented itself as a bootleg of a Ramones album, with no mention of The Gerogerigegege anywhere on the packaging. Diving into these facts is endlessly, deliriously fascinating, and is a window into the appeal of a band that has gone unrecognised for pushing the envelope of what is acceptable in both music and Japanese culture.

But there was one mystery of The Gerogerigegege that I have thus far been unable to crack: it is the 15 year absence of Juntaro Yamanouchi. Since 2001, the year the band released Saturday Night Big Cock Salaryman, the man was lost to the world, utterly unreachable. Many people assumed that he and Gero 30 had died, forgotten by a world they had heaped their challenging vision on. Yet even after the sudden reappearance and release of the album Moenai Hai in 2016, and following further shows and releases, where Yamanouchi had gone for over a decade is a mystery. Any attempts from myself to uncover any interviews from this century resulted in fruitless hours of trawling blogs, social media, and forums. The only recent interviews that can be found about the band are instead attributed to people outside of it. It further doesn’t help that my own lack of being able to read kanji or indeed be able to input searches in Japanese forums severely limited this search into obscurity.

This is Side A of the band’s infamous Showa release, which features the soundtrack of two people having sex over the Japanese national anthem. Yep, gnarly stuff.

Yet, as I sit here, after hours and hours committed over several weeks, after poring over some of the most vile noise and shock art that I have ever consumed, peering into the creative structure that rebelled against its own walls, I am now struck by the realisation: I don’t think I ever wanted to meet Juntaro. What would I say? What could I say? My interview questions list reads like a high schooler’s first attempt at an interview.

Yet the only thing I can see myself ever asking Juntaro, if I had spoken with him, or if I ever speak to him in the future (doubtful), would be about the one thing that burns feverishly in my mind, red-hot with intensity: Where did you go, Juntaro?

What were you doing, all those years? What were you thinking? What did you write? How could you have been away from your music all those years, living a life that I presume was completely isolated from your stage persona and art’s message? How did you live and see the world while planes flew into those towers, and the resulting invasions of the Middle East passed? What was your opinion on the changing political landscape over the years, both in homeland and abroad? What did you do while the housing crisis tipped off a global recession? What were you doing during the Tsunami? How did you get by all these years? Who did you turn to? What were your loves, your fears, your ambitions, your goals?

Who were you, Juntaro, during all those years?

Perhaps it’s best that I did not have my answers to these questions. They are selfish, greedy questions, and cannot be easily answered, even by the most open hearted among us, at the best of times. Maybe the most mysterious persona in music should perhaps go to his grave (and ours to our own) with these questions unanswered.

And maybe the answer is in the music itself. Moenai Hai is an output that, while it may not have been 15 years in the making, was certainly the product of 15 years of living on the periphery of music, art, and perhaps society itself. It is a challenging opus, one that sucks the listener in and aggressively pushes them away, starting with a soundscape of muttered musings of someone forgotten outside the progressive, sleek hum of Japan’s rail system, before embarking into its own self-made void.

The rest of the material speaks for itself. The inhalation and exhalation of repugnance, beatific, dark, disturbing, profound sonic emanations is something that has been slowly making its indelible mark on the noise scene for some time now. And word appears to be travelling fast.

So, while we may not be able to hear from Juntaro himself in his own words, I would counter that we can, by paying close attention to the dark landscape his last release provides, see deeper than any of his words could convey. Listen to the darkness, the ecstasy, the madness, the despair, and perhaps you will also hear the salvation of someone who would end everything you know about art.

Few videos better sum up The Gerogerigegege than this one which features Gero30 having his penis sucked on by a vacuum cleaner while Juntaro hops around and screams and intermittently sets off instrumentation. It’s hugely fucked.