What’s unique here, though, is that Horndal (the band) has taken the story of Horndal (the town) to heart. The quartet has adopted the town’s name to represent their brand of sludgy, metallic hardcore and centered their Prosthetic Records debut album, Remains, around the story of their hometown. We tracked down drummer Pontus for a primer about not realising that you’re growing up in ghost town, how a twenty minute move to the southwest can change one’s life, and how Google’s so-called philanthropic business model is just as sketchy as any other corporation.

Horndal is a uniquely Swedish proposition. Can you explain your band’s history and how closely tied you are to your environment and upbringing?
Pontus: The idea the band is based on is actually from 1977, before three of us were even born, when they closed the factory in our little hometown of Horndal. More about that chaos later. We formed the band in 2016, in a panic, after we suddenly got the opportunity to record with Steve Albini. More about that chaos later.

According to census reports, Horndal has a population of 1,114 residents. Are you guys literally the only metal musicians in town? I’m assuming it wasn’t difficult to find one another and to form a band?
Pontus: On to the chaos! The closing of the steel mill emptied Horndal. The town shrunk by two-thirds, transforming the place into a wasteland of empty houses, closed stores, and mass unemployment. My family (including my brother Henrik, who is also the guitarist/vocalist in the band, and I) stayed for another thirteen years, but then we also had to leave for the closest town that still had jobs, which was twenty minutes away. And there they had a pretty good death metal and crust punk scene. So, to answer your question: no, there weren’t that many people to play with. But finding a guitar player was easy, since he was living in my house, fighting with me all the time.

Horndal deliver a song and video that’s anything but a “Wasteland” of awesome sounds.

What was the original musical direction for Horndal together?
Pontus: When I was eleven, my friend and I accidentally played his older brother’s Slayer 7″ on 33 rpm instead of 45. It made for a super heavy and scary sound and ever since I’ve always wanted to start a band that sounded like that. So, the direction from the get-go was to sound like, “If Slayer didn’t have the energy or skills to play their fast parts, but were even more pissed off.” And we had reason to be. If you add some more hardcore, punk and twangy guitar noises, all recorded live, I think you have Horndal. So, it came natural. And unnatural.

The story behind the album, Remains, revolves around the death of your hometown. What can you tell us about the history of Horndal (the town), what it was like growing up there, what it’s like now and how politics and industry contributed to its destruction?
Pontus: I touched on it earlier, but growing up in this decimated town wasn’t very weird to us then because we were kids and didn’t know anything else. But with getting perspective and hearing our parents talk about the horrible situation and how they protested against the way the state and steel mill just left the town to die, you understand that it was quite a special atmosphere in Horndal.

There was not much hope for the future, very low self-confidence and that creates a potentially dangerous atmosphere since these things stir up a lot of anger and misguided hate. But hey, that’s pretty great for metal and punk, right? Now there are actually plans for fucking Google to build huge server facilities in Horndal. The scariest company in the world is coming… They say that they need to drain the local swimming and fishing lake for water. “Don’t be evil,” my ass.

The album REMAINS dropped on February 22, 2019, via Prosthetic Records. 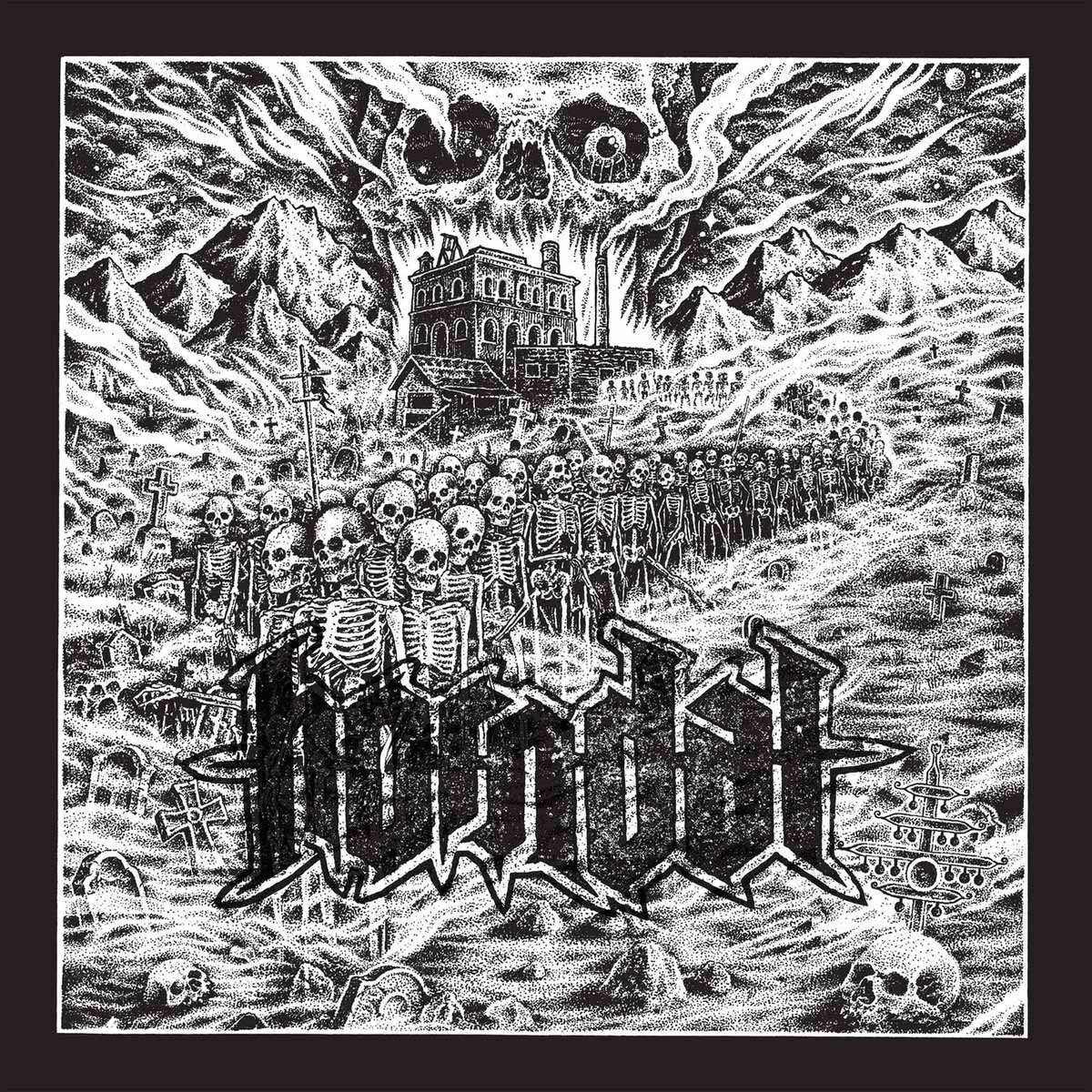 As residents, was the decision to centre the band’s name and album after the town something that had been in the works for a long time? Or did the idea come up more recently?
Pontus: My brother and I got the idea when our parents were talking about the theatrical play that was written and performed to protest against the closure of the factory. It depicted Satan (played by my father) coming to destroy the mill, taking the money and sending the community to an early grave. That’s a pretty great story for heavy and aggressive music. And it’s a true story, our story. So, we just started writing riffs and translating lyrics from the songs in the play.

Has the band caught the eye or ear of local residents/government? If so, what have they had to say? Are you at all involved in local industry, government or politics? If so, how has that involvement impacted what you bring to the band?
Pontus: Yeah! We get tons of support and shout-outs from the locals young and old. Some of them are metal heads and really dig the music. Some think it’s just terrible noise, but really like the idea and that someone is finally talking about the town again. We played one of our earliest shows in Horndal and we had local punks moshing, a bunch of seniors with their fingers in their ears in the back, and children running around playing. It was great, and weird. There’s not too much happening in Horndal, so…

How long did it take to write Remains and, given that you had to weave a story/concept/lyrics around the music, was there anything that you found yourself doing different in the writing process?
Pontus: We already had the theme and since most of the lyrics are based on that theatrical play I talked about and we had a lot already in place when we started writing the music. I was on parental leave with my daughter for nine months (how very Swedish of me) and I wrote most of the riffs when she was napping. Not very metal, but very effective. I must have traumatized her for life.

Your first EP was recorded/produced by Steve Albini. Where was Remains recorded, by whom, and how different a process was it working on the album than it was working on the EP with Albini?
Pontus: Remains was recorded at legendary Studio Gröndahl in Stockholm by Karl Daniel Lidén (Bloodbath, Craft, Crippled Black Phoenix, etc). It was quite different from recording with Albini. I was scared shitless going into the studio in Chicago with Steve. The band had existed for three months and we barely had material, let alone time to rehearse. And we were going to record with a man and legend who does everything on tape, everything live and we had two days in the studio to make an EP, mixing included. Madness!

But, thankfully, we are total idiots and decided to go for it. We survived, Steve was a total genius and it turned out great. Very cold and big steel-feel to the production, just like we wanted. For Remains we wanted a warmer and more powerful sound. Karl Daniel was the perfect guy for the job. With him we had more time do discuss references, methods and sounds. But we still recorded all the basic tracks live in three days. Because we’re naive and restless. And poor. We really want to capture that raw and wild feeling of playing live, not correcting every little flaw. I hate music that sounds polished.

With the name of the band paying tribute to your hometown and the album speaking to specific local events, have you considered that you might have painted the band into a corner with regards to what’s expected or you’re able to do in the future? Or does it matter?
Pontus: At first I thought so too. It was like, “What have we done?!” But pretty soon we realized there are so many stories to tell from Horndal. The devil (Google) drinking all the water from our lake is one. And then there is another great horror story based on real events called “Horndal and the Dragon.” So that’s a given. And when we’re out of stories we can be like Chicago, Kansas, Boston or Berlin and just be a band named after a city. The well is deep. 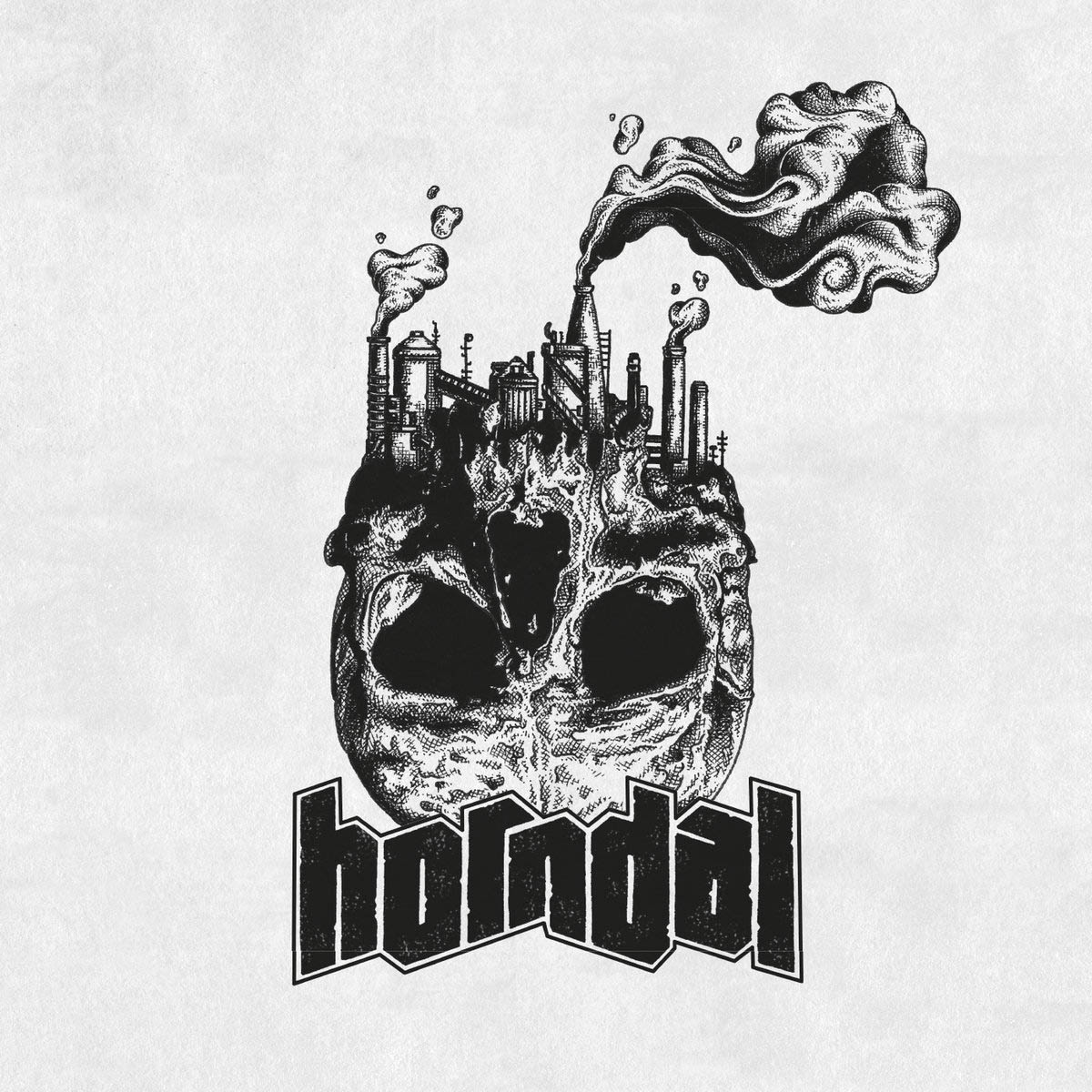 Descriptions and early reviews of the album have pointed out that Horndal takes many influences from the long lineage of Swedish metal, hardcore and punk. In listening to the album, I think I’d agree. With the theme of the album, was it a deliberate move to keep things sounding “Swedish”? Or do things sound Swedish simply because Horndal is a Swedish band and you’re just doing what you do naturally?
Pontus: It’s locally sourced metal. Very sustainable! No, it’s not deliberate, it’s just that I think we’ve always been – maybe subconsciously – inspired by local bands and scenes. As I said before, just twenty minutes away from Horndal there were great death metal and D-beat bands like Uncurbed, Internment, Centinex, Asocial. It’s our breast milk!

At what point did Prosthetic Records come into the picture?
Pontus: We have great respect for that label, so we contacted them after the album was finished in June last year and things happened very quickly. They really liked the album and wanted us to join the roster. High five! Even though the album isn’t out yet, you can tell that we’re on a different level now. Doing interviews and getting accolades in magazines I read growing up is quite a thrill. We’re honoured.

How much live work/touring have you done? Have you played much outside of Sweden? If so, how have you found the non-Swedish crowds responding to what you do?
Pontus: We haven’t toured that much with this band yet. A bunch of shows in Sweden, but there are a whole lot more coming up. And there are plans to take this gloomy circus abroad, so we’re very excited. Our story seem to connect with people from all kinds of places, since what happened to Horndal has happened to towns all over the world whether it be factories, mines, big hospitals or other things that keeps communities alive.

How have any plans that you might have had (or not had) changed now that you have a name label like Prosthetic backing you?
Pontus: We didn’t want fly the plane as we’re building it, so we started building our foundation here in Sweden and now we’re ready for takeoff and go to new places, meet new people, get on new tours and spread the chaos as far as possible. With Prosthetic backing us, it’s a whole lot easier.