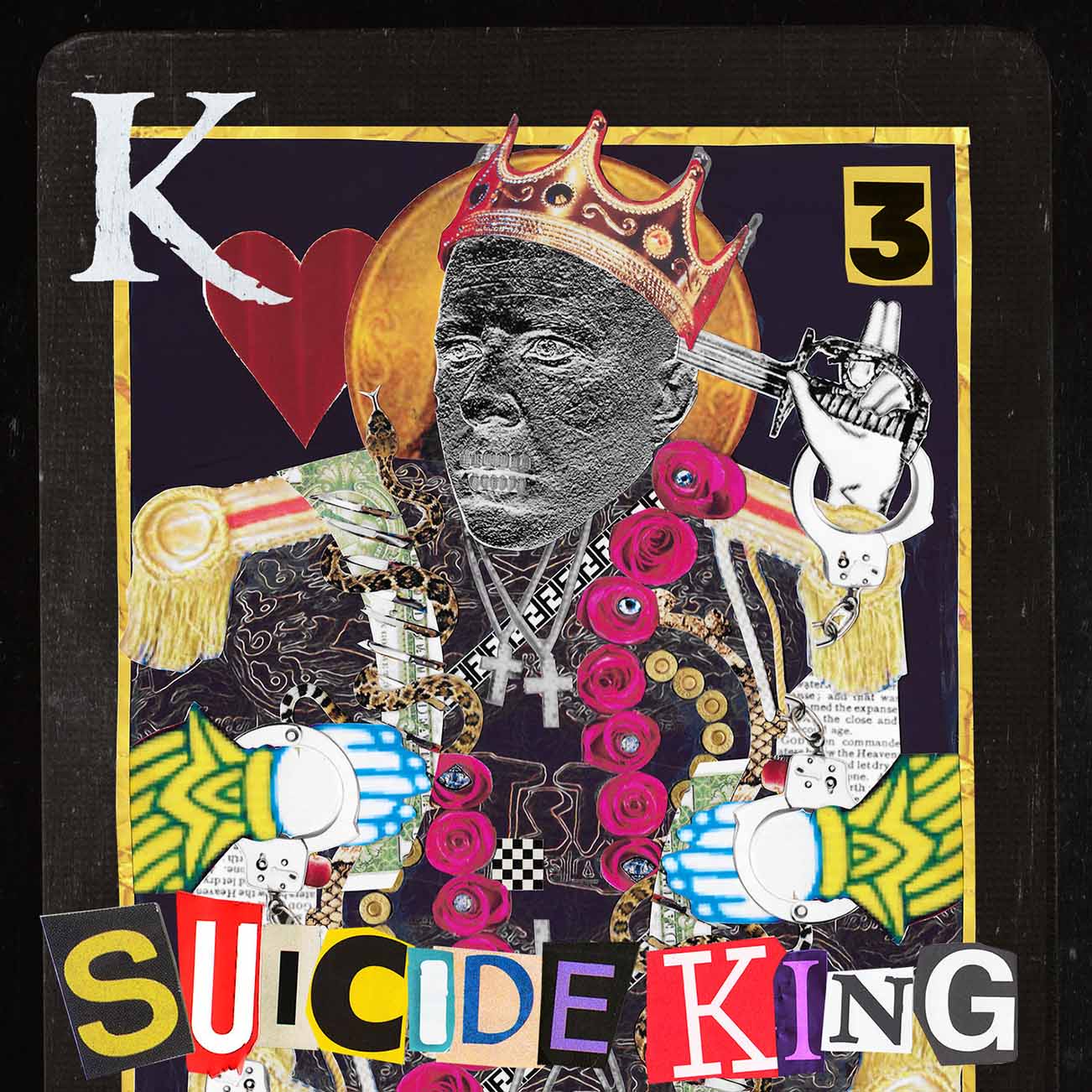 King 810 have been quite a divisive band since their conception. They’re one of those groups either followed and loved or passionately dislike. Notorious for singing about the difficulties of being born and bred in Flint, Michigan, as well as guns and politics, they’re a relatively niche band in terms of content and likeability. Initially oozing with nu-metal influence (their single “Fat Around The Heart” pulsated with Slipknot-like viscera), the band shot up through the ranks and gained quite the following, before letting their hip-hop and electronic influences seep in during later releases. After a brief break, they have returned with the self-released Suicide King.

“How can we give them something new that’s serious but entertaining too?” are the album’s first words, muttered in a voice reminiscent of The Joker, and calling into question whether humour is a useful tool to add to their arsenal. “Heartbeats”, the record’s first track, contests this somewhat joke-y spoken word intro and is unexpectedly serious, with over-the-top distortion throughout the track giving it an uncomfortable, intense, and unique kick-off. It’s a chaotic and unexpected start, which sets a promising tone.

Suicide King has a number of appealing riffs and grooves, along with some moments which work in its favour by standing out. “Bang Guns” features a meaty riff, catchy lyrics and is arguably one of the standouts of the record for its simple yet effective hooks, while “God Is Watching” has an instant singalong chorus in a Jonathan Davis-esque vocal style. These memorable moments are a breath of fresh air at sparse moments throughout the record and kick it up a few notches, bringing a more malevolent style shrouded subtly in electronica.

The “Heartbeats” start kicking around the 2:10 mark.

After this point, the album beings to wane. There are moments where it picks up in terms of memorability, or a catchy riff is thrown in, however it’s becoming clear that the quality of their material has deteriorated over the years. There’s still no questioning that David Gunn is an interesting character, capable of delivering a number of vocal lyrical styles (some of which work, others not so much) that add buoyancy to a record that otherwise musically falls flat. However, the album feels somewhat uncared for and rushed in places.

To the band’s credit, each track shows King 810 attempting a different style or approach to their sound, demonstrating that they have the knowledge and potential to create an array of interesting pieces. “.45” showcases the band’s rap-oriented side, again talking about the common theme of guns, which has become almost prolific with King 810, while “Wade in the Water” brings a soothing, melodic side to the band which could be potent if utilized more. The topical discussion of the band’s hometown’s water crisis in the latter song brings a personal touch, which certainly gives it visceral quality. It is obvious, however, that the flame of the potential titans who were initially greeted with rapturous media attention and shows galore has dwindled somewhat. It’s a shame – as the record progresses, especially through the aforementioned tracks, there are clear moments which have the potential to be savage and truly entertaining, but these opportunities seem rushed and looked over.

The record is saved to some extent by its closer, “Sing Me to Sleep” – a sombre number which brings out their creative side significantly more than the majority of the album. Bringing blends of rap with dark electronica and rather gripping lyrics – “I don’t wanna die but I don’t wanna live like this” – it shows promise for a new addition to King 810’s stylistic palette in the form of a tranquil ambiance mixed with Gunn’s signature raspy, distorted vocals. It ties the album off on a much-needed high note, though it doesn’t offset the weak material which preceded it.

There’s an underlying feeling throughout Suicide King that there could be something more inside which would push it further. There is a lot of potential in King 810, but a good portion of it is squandered by parts which don’t really hit the mark. A shift towards electronica and away from the somewhat edgy, rough-on-the-edges metal could be a right step for the band, as the tracks which focus on this (“Wade in the Water”, “Sing Me to Sleep”, and “What’s Gotten Into Me”) are amongst the strongest. Suicide King seems to represent the band’s current crossroads – their reputation is growing rapidly into that of a titan, yet their musical direction, and thus, their future, seems confused. As the band continue to become quite a divisive topic, it’s unclear where they will jump next.