Anachronism are a technical death metal three-piece from Lausanne, Switzerland, and their album Orogeny was one of last year’s hidden gems. Self-released in July 2018, there was little fanfare surrounding the recording at the time, but word spread and prominent metal figures such as Trevor Strnd (Black Dahlia Murder), who championed the album in his Metal Injection column, began to take notice. Orogeny eventually appeared on several 2018 Album Of The Year lists, and rave reviews continue to trickle in now as the metal world plays catch-up. This time-lapse is a testament to the difficulties faced by unsigned bands in reaching their listeners, but also to the fact that music of quality ultimately speaks for itself.

And Orogeny is tech-death of the highest quality. Frequently compared to Wormed and Artificial Brain, Anachronism veer towards the abstract, never letting the brutal heaviness and blastbeats get in the way of complex melodies and jarring dissonance. Bold and surprising stops and starts break up the juggernaut along the way. This album is immaculately constructed, with nine sonic assaults interspersed with a poetic interlude (“Hidden In Relief”) and a confident electronic outro (“11’034”). We recently spoke to frontwoman Lisa Voisard at her Lausanne studio about tech-death, touring, and teaching…

“Orogeny” refers to the process by which mountains are formed through the movement of the earth’s crust. If you didn’t know the word, you are not alone. Once you’ve used a dictionary to look up several of the album’s song titles, “Cryptobiosis,” “Neurodegeneration” and “Endotherm” amongst them, a powerful canvas of imagery emerges. A barrage of tectonic upheaval, a pathetic human species in decline, and a planet turning in on itself for protection. This is emphasized by the atmospheric cover depiction of swirling volcanic movements.

If you dig guitar playthroughs then you’ll be sure to enjoy this original one from Anachronism of “Anthropocene” off of Orogeny.

It’s perfect imagery for an album of music that veers towards the heaviest end of the tech-death spectrum, because indeed, could there be anything heavier than the movement of the earth’s crust? I wondered if Lisa, who composes almost all the music and lyrics, is a scientist? She laughs ”Not at all! I like searching around on Wikipedia! We are all interested in scientific stuff, things to do with the cosmos, natural disasters… we often talk about these subjects after band practice. We are these tiny humans, tiny grains of sand in a vast ocean, and we try to master nature but in fact, we are powerless against some of the processes happening around us.”

“I always like to make a link with the natural world because we all come from nature; we are just made of cells after all, even if we try to distance ourselves from that. We chose the title Orogeny, the creation of mountains, as a metaphor to consider the creation of our selves. We have this human form because of the things in the past that forged us.”

Lisa learned to play the guitar as a teenager. ”I started when I was 13. My mother had an acoustic guitar at home, so I played that, in fact, I played reggae at first! I learned the chords from my aunt who also played the guitar. At 14 I bought my first electric guitar and started to use distortion. But I really started to play seriously when I started the group because that gave me a project, a mission.”

She formed Anachronism in 2009 with drummer Florent Duplover, plus their former vocalist; although it took them a while to arrive at the sound they have today. “We all started by listening to metal that’s a little more accessible, such as folk metal, pagan metal, then I moved on to things like Children of Bodom, still accessible and easy to understand. Then I discovered death metal in the style of Dying Fetus, Misery Index, groups that had more aggression in their sound, and we moved on technical death metal, as well as listening to groups such as Gojira. When we started Anachronism we didn’t know exactly what we were going to do, we just played the music that we liked. Our new guitarist has more of a prog style; he comes from a metalcore and djent background. He has allowed us to open ourselves up to some more ‘prog’ melodies, to play things we might not have tried otherwise. So we try not to limit ourselves. We provide a subgenre to help people to understand what we’re doing, but on this album we have put a lot of very dissonant elements. There are elements of black, death, prog, it’s more an etiquette than anything else to give a subgenre.”

Orogeny was self-released by Anachronism in July of 2018. 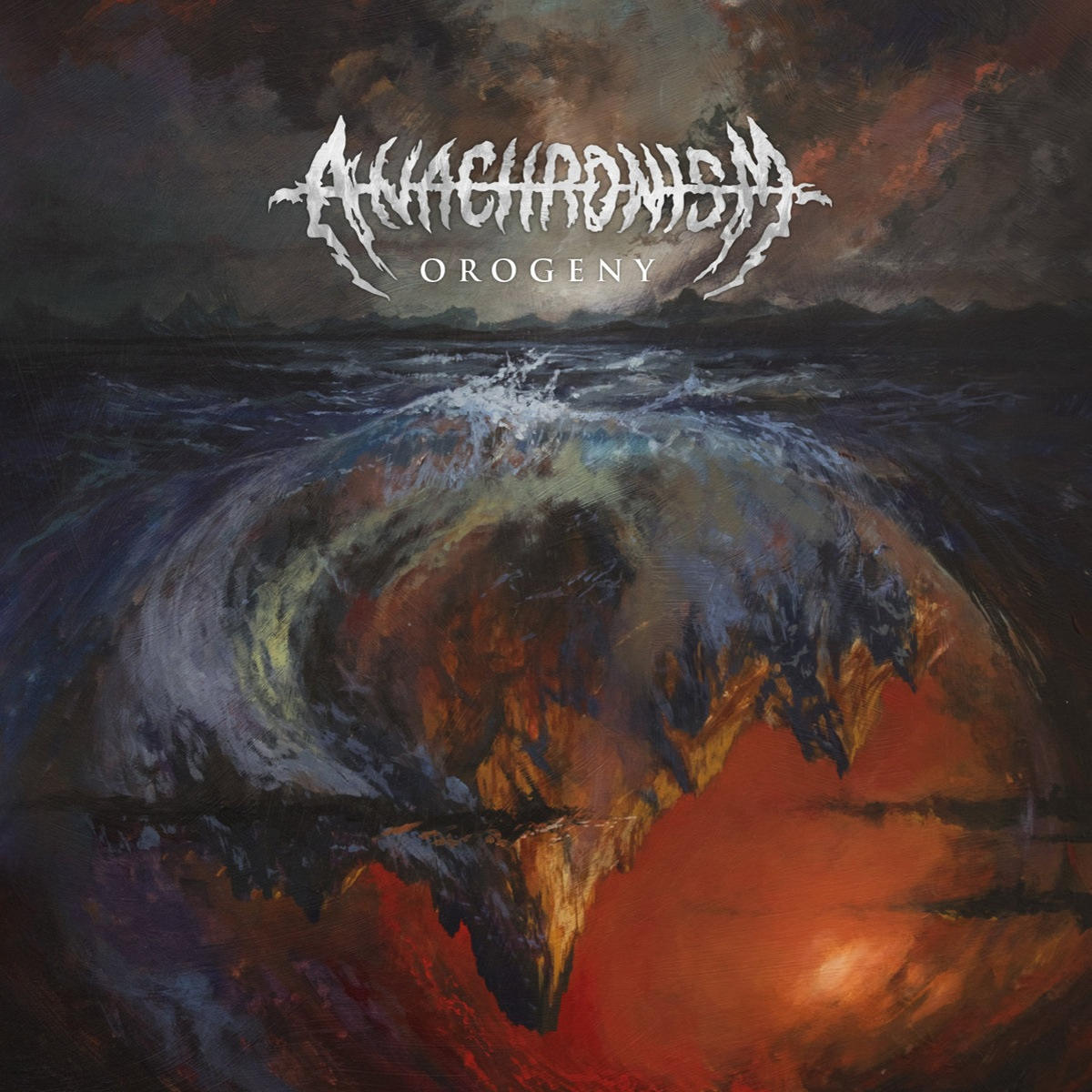 After a line-up change in 2016, Lisa decided to take on the vocals herself. ”We looked for a replacement, we auditioned a few vocalists. But since I was composing the lyrics, I found it complicated to explain to someone else how to sing them, plus I was interested in the vocal techniques myself. And in terms of synchronizing vocals with guitar playing, that is something I had already mastered in a grunge-rock group that I had been in previously. Also, with one less person, it’s easier to organize ourselves and make a decision.”

Women are now getting more recognition in metal, but Lisa inhabits a role still very unusual for either a man or woman, as she manages to combine ultra-technical guitar playing with lead vocals. One of the beautiful things about extreme vocals is that the sound is ungendered, and Lisa doesn’t feel that being female places any significant restrictions on the deep guttural sound she can produce.

”You have to work a lot at the beginning because naturally, a woman’s voice is not very low. You have to play with your vocal cords, with your larynx, find the techniques to make your voice lower. And men don’t really have to do this extra work because for them it’s just mechanical, physical, they already have low voices. So that takes work, but after that, I don’t feel I am limited in any way. I like the sound of growled vocals, but what I like most is that it renders the music neutral. If someone does it really well I don’t say that’s a boy or that’s a girl; it’s a person who is making music. I want listeners to concentrate on the riffs, and not pay attention to who is behind them.”

Lisa also provides vocal lessons in her Lausanne studio. Are boys keen to learn this sound from a woman, or does she appeal more to female students? “At the beginning, I only had boys actually! But at the moment I have mainly girls. It fluctuates a lot, and some people come just for a few weeks, or a few months..” While Lisa’s particular guttural vocal style is niche, to say the least, this does mean she can carve a place for herself in the market, because if few people want to sing like this, even fewer are able to teach it. “Metal is a small world, but everyone knows each other. So within Suisse Romande, you quickly get to know everyone on the scene, through going to the same concerts and bars. You very quickly make a circle of people who listen to the same things, play in the same types of bands. And there aren’t many people who teach this; there are plenty more guitar, bass, drumming teachers than metal vocal teachers.”

Here’s another wicked playthrough video for the track “Cursed Be The Senses.”

Lisa didn’t take lessons herself; she watched lots of YouTube videos, including plenty on clean singing too, to learn how to master the diaphragm, control the breath. She also read articles, and crucially, spoke to a lot of vocalists. “After their concerts, I would ask them about their techniques, and if they had any tips on not injuring yourself. I would say that I spent around a year doing research. I was very interested in these things before I actually did them.”

Lisa’s advice for budding growlers and screamers is the following; “I would say that with this type of music, your best teacher is yourself. You have to really listen to yourself, understand the sensations of your body, understand your limits as well. With the guitar, you can play for six hours without doing yourself any harm, but with this, you are obliged to take care of yourself. A major part of the learning process is to test yourself. Listen to things that exist and talk to the people who do it. A large part of it is mental, having the intention, the inner rage and so on. But you mustn’t confuse intention with technique. Having a base is very important because the times when you can injure yourself are during rehearsals and concerts when you’re not concentrating, when you’re thinking about other things.”

For any unsigned band, it is an uphill struggle to get attention and reach an audience, no matter how good their music. Anachronism are philosophical about the process.

“It takes a lot of energy, and there’s no one else to do it for us. As well as thinking about our songs, how to construct our album, we also have to think about how to reach people. And there are a lot of groups releasing a lot of albums, so it’s not clear how to make a place for yourself. But I count on the fact that if it is good, people will talk amongst themselves, and that will form a part of the promotion. And with the internet, there are so many ways to connect. For example, Trevor Strnd discovered us through Instagram. There are people who are really passionate, the melomaniacs who listen to several new albums a day in order to find a pearl, and who don’t just listen to the first album that comes out but really delve for unknown bands. That’s what we do as well, we are always pleased when we discover good music that is unknown or underground.”

Have a listen to this stream of the title track to Orogeny.

They are actively looking for labels but again are philosophical about the process. “We have sent our music to several labels, and have had some discussions, but it can be a risk to go with a very small label. If one day we are offered an interesting contract we will go for it. If we had a label we would still record and release music in the same way we do now, with better promotion of course, but we really depend on concerts and festivals, and having a label would allow us to tour more widely.”

Last summer Anachronism went on a European tour with Cenotaph and Gorgasm, which they found a great experience. “We had toured before in 2015, but only very small venues, so to go with bigger bands this time, to play more professional venues and organization, it was fantastic. You drive all day, arrive, unload your equipment, soundcheck, play the gig, stay up talking all night, sleep a bit and then back in the van. It’s a rhythm of life which is very tiring, but a wonderful human experience. Also, we had already loved the groups, Cenotaph and Gorgasm, for a long time, so to meet them and discover that they are people just like us, with no egos at all, everyone eats together, hangs out together, there was a very open atmosphere.”

And if Anachronism could tour with anyone at all? “It would be Gorguts anyway! They have a vision of the world and of music which is very profound; they are heroes to me really.”

With some exciting Swiss and Belgian gigs already in the diary for this year, and hopefully many more dates to be announced soon, Anachronism have also started writing their next album. 2019 must surely be the year when their unique brand of death metal gets the recognition it deserves.